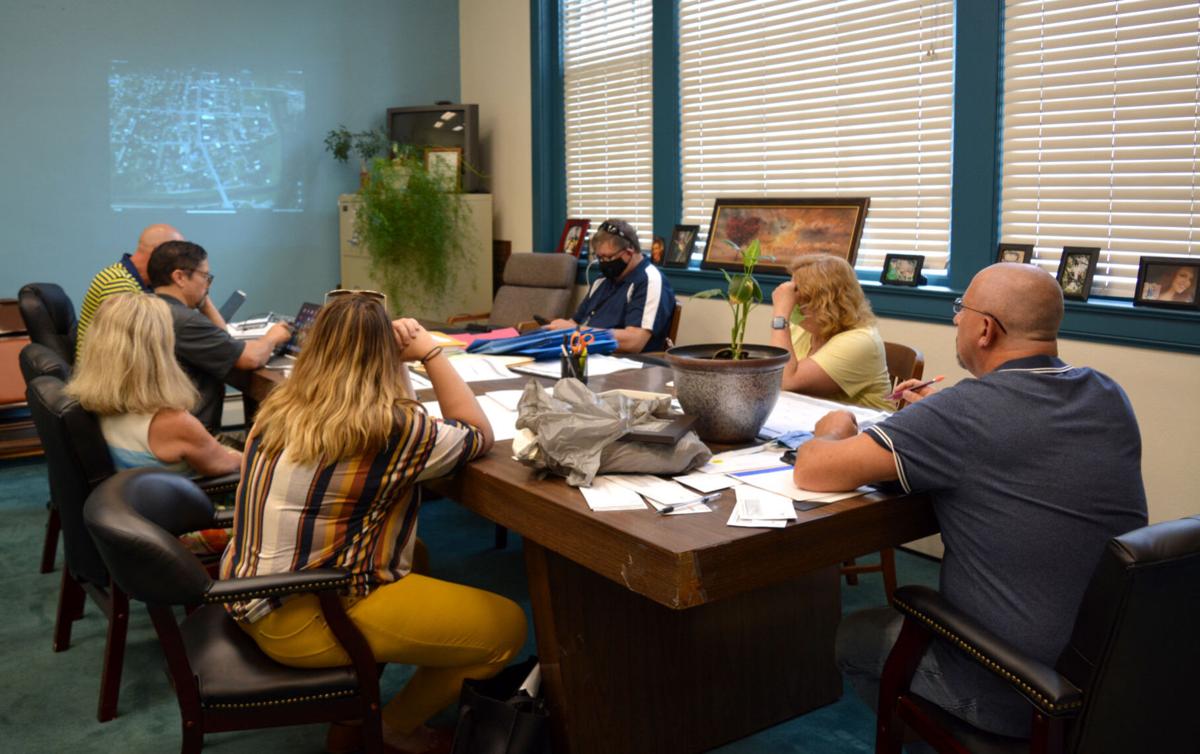 The group from the walkthrough met in the Municipal Building office to discuss possibilities for Reynoldsville. The group of Reynoldsville officials and consultants are pictured having a brief discussion about the goal of the day before starting their recent walk around town.

The group from the walkthrough met in the Municipal Building office to discuss possibilities for Reynoldsville.

The group of Reynoldsville officials and consultants are pictured having a brief discussion about the goal of the day before starting their recent walk around town.

REYNOLDSVILLE — Members of the Reynoldsville Grant Committee recently did a walkthrough of town with consultants who will be helping them through the process of a capital project to revitalize Main Street.

Consultants who came to the borough were Toby Fauver of Rockland Consulting, and Peter Quintanilla of Michael Baker International.

“Whatever we apply for, generally we’re going to try to have the application be broad enough that if you get funding, you can make decisions within that funding and still be within what we applied for,” Fauver said.

Fauver has a background working as both a consultant on similar projects, and as a worker for PennDOT as the deputy secretary.

“If you don’t get something awarded in this round, there’s future rounds, so don’t get discouraged. There’s communities that have been in line for a while that apply every round and eventually they get awarded money,” Fauver said.

Some possible changes the consultants suggested during the walkthrough were adding bulbouts and possibly a bike lane to Main Street.

A bulbout is a section of sidewalk that extends out from an intersection to align with parking to give pedestrians a safe space to step out when crossing the street. Fauver said these are great safety features, and will also aid to slow traffic down.

Burkett also said the borough is interested in raised crosswalks.

“Something else we’ve thought about, with trying to cut down on people speeding up and down Main Street, we’ve looked into raised crosswalks,” Burkett said.

One of the common themes during the walkthrough was that much of the property along Main Street is owned by individuals, but not much is done with the properties that are in need of improvements, or could be redeveloped. This is a frustration that Burkett has expressed during council meetings in the past.

“There’s so much potential in this downtown, I believe, but you need the business owners to cooperate,” Burkett said to the consultants.

Following the walk of Main Street, which covered Fifth Street to Third Street, the group returned to the municipal building to discuss possibilities.

“It would be nice to have a consistent look the whole way through town, with the lighting and whatever we do. But like you said, it’s kind of sporadic right now,” Burkett said.

Fauver was in favor of the raised crosswalks, and said they would help to slow traffic down in town. He also said that pattern difference in the road will cause drivers to instinctively slow down.

Another suggestion that was made were mid-crosswalks. These are typically shied away from because they are seen as less safe than crosswalks at intersections and stop lights.

Fauver and Quintanilla estimated the right of way to be about 50 feet wide. According to Fauver, a 24- to 25-foot span is typical for traffic lanes, which leaves another 25 feet for parking, a bike lane, bulbouts and parking.

“You probably have room that you could put a bike lane on each side and still have room for parking,” Fauver said.

Quintanilla downloaded images of Main Street from Google Earth, and took some photos on the walk to use as examples of how different features could be implemented into Main Street.

One of the concerns of the bulbouts was that it would make it difficult for truck traffic to make turns in town. To combat this, Quintanilla drew examples of asymmetrical bulbouts where there is only one extension into the intersections from one side of the street, rather than both.

“What you’re doing in this case is shortening up the crosswalk distance between one curb and another by a good 26 feet. Now 26 feet might not seem like a lot, but imagine an elderly person, or a mother with a kid. That equates to seconds, and those seconds could actually be a life,” Quintanilla said.

“The other thing that happens in areas where you put these in, is that although the travel lane is the same, this seems narrower. It feels like they are funneling down into a more narrow area. Anytime you feel like you’re funneling into a little more narrow area, you slow down, and people will naturally slow down through intersections,” Fauver said.

This was a preliminary meeting to discuss options to redevelop Main Street. Burkett and Scolese discussed what the borough might want, and will continue to discuss this with the rest of council. Fauver will be waiting to hear back what the borough would like to move forward with to begin the process of filling out a grant application for the submission season months from now.