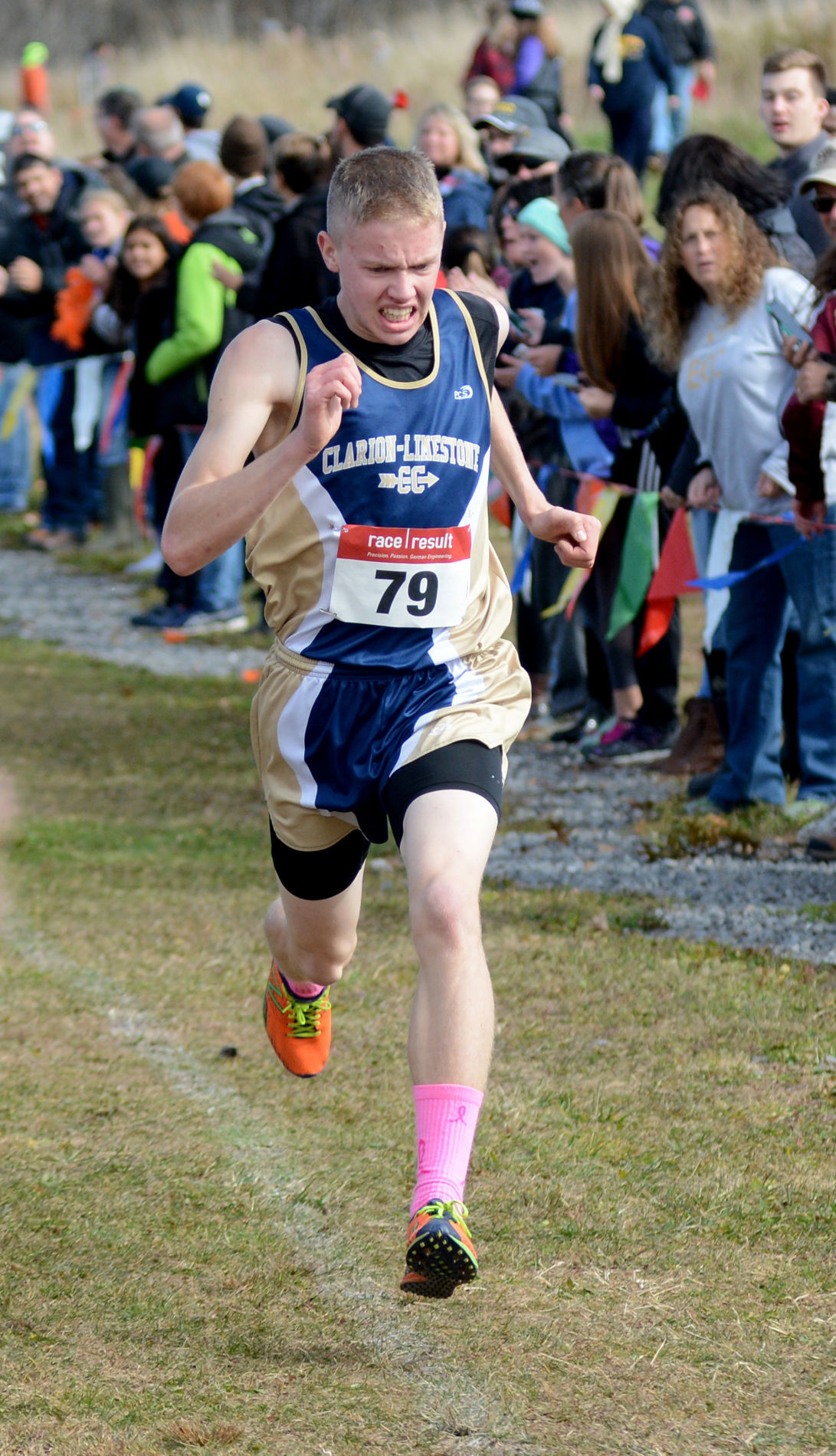 C-L junior Braden Rankin earned a trip to states with a 15th-place finish at last Saturday’s District 9 Class 1A race in Ridgway. He was 72nd as a freshman and 40th last year before jumping up even further this year. 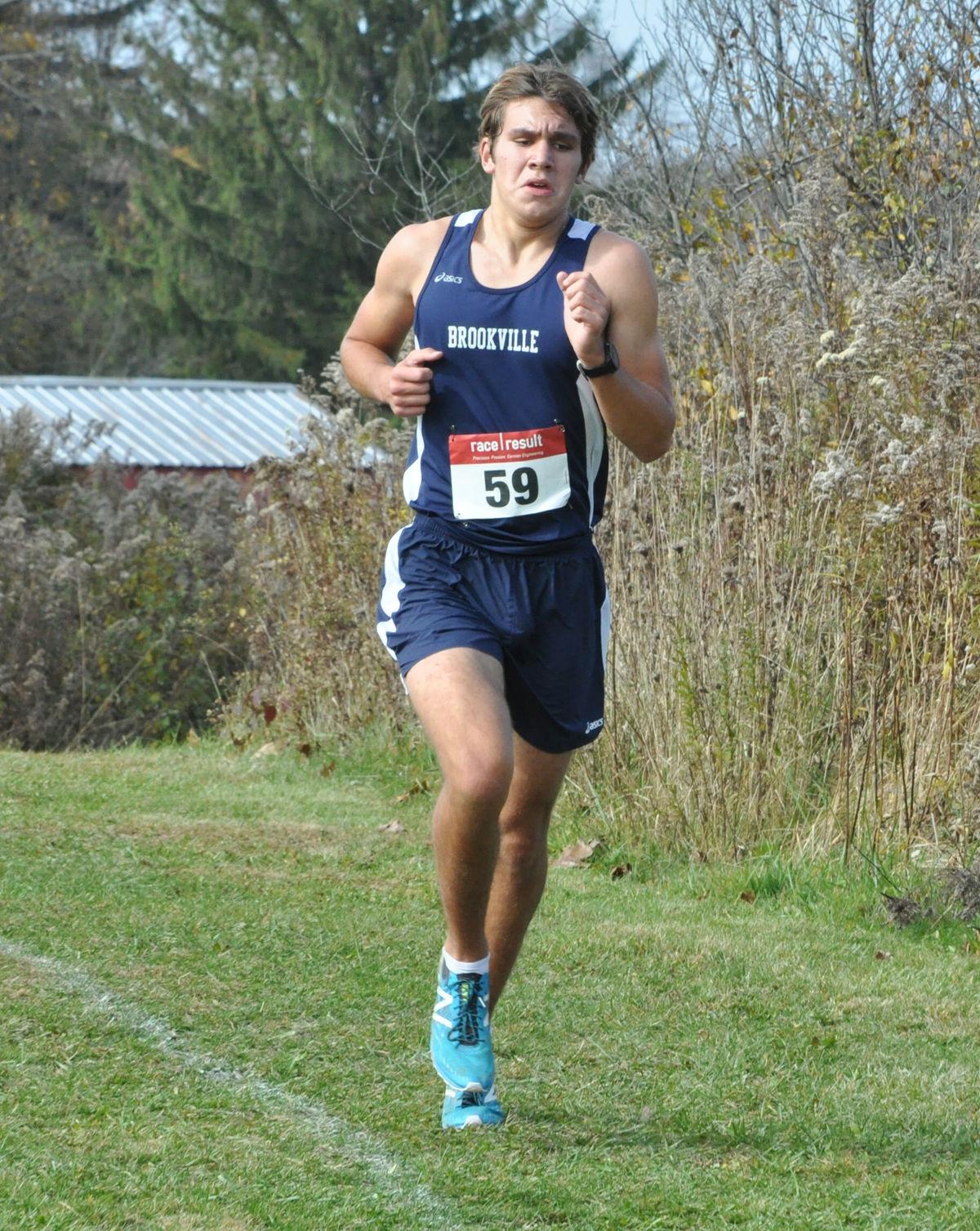 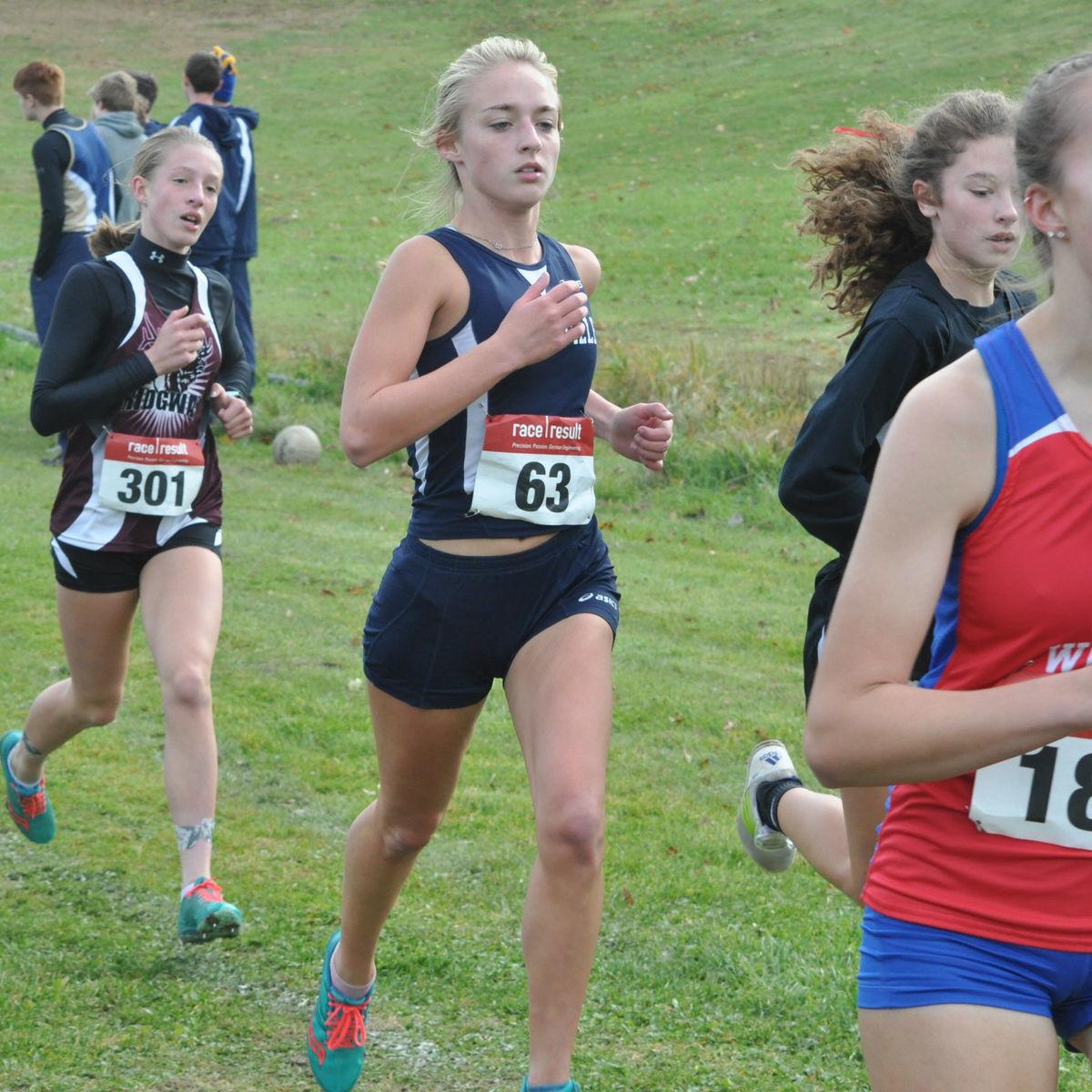 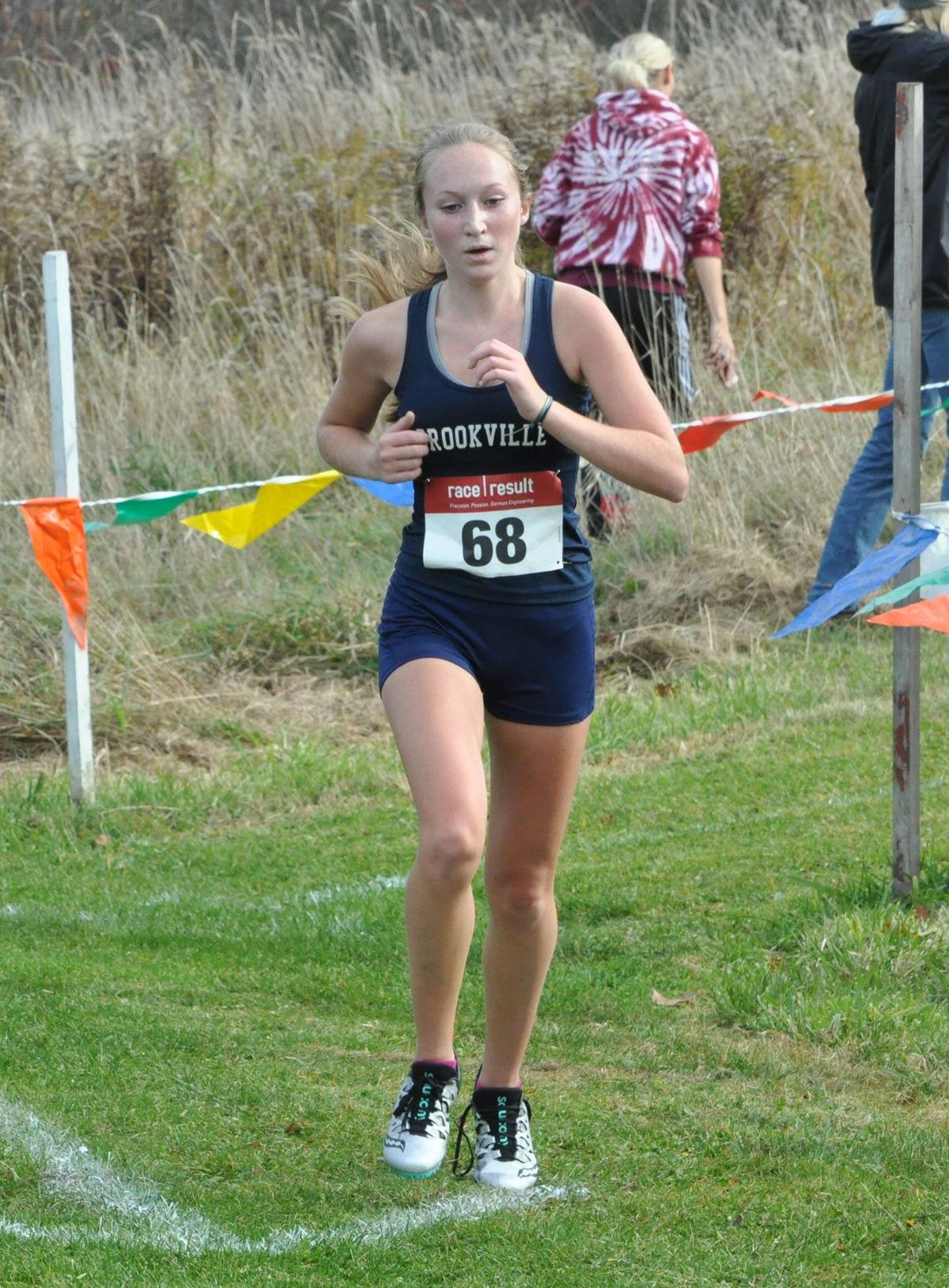 C-L junior Braden Rankin earned a trip to states with a 15th-place finish at last Saturday’s District 9 Class 1A race in Ridgway. He was 72nd as a freshman and 40th last year before jumping up even further this year.

For Brookville and Clarion-Limestone in the Class 1A races, two runners locked up berths for this Saturday’s PIAA Championships in Hershey — Brookville junior Emma Fiscus and C-L junior Braden Rankin.

For the Lady Raiders’ Fiscus, it’s her third trip to states in as many years. She was part of the team trip to Hershey as a freshman, then finished 11th last year before another 11th-place finish this year in 21:44. That’s 90 seconds fast than last year’s rain-soaked run.

Fiscus, who claimed the sixth of 10 non-team state-qualifying spots, said the key to her day was to get out fast and defend her position.

“The coaches were saying if you look at race results at the half-mile and one-mile splits, that’s usually how it ends up and it’s comparable,” Fiscus said. “So they wanted us to go out and be where we wanted to be and try to stay there rather than making our way up and that really helped.

“I think I did a lot better going out harder than trying to save it.”

“We wanted her to be aggressive and get with the leaders and put herself in a position where she could get the state-qualifying spot,” Brookville head coach Doug Roseman said. “We felt it’s more practical to hold your position than work your way up. We wanted her in position early.”

Fiscus ran a 22:12 in her 24th-place finish at the Ridgway Invitational earlier in October.

“Today was most likely the best she’s ever run, definitely her best time on this course by far and it’s a good sign for next week,” Roseman added.

“(Fast start at districts) is definitely good preparing for states because you have to go out crazy-fast, way faster than you’re used to so it helped a lot,” Fiscus said. “I’m definitely not going to try to let my nerves get the best of me. Last year, I let that happen and got really nervous. I was the only one on the team there after being with the team the year before. I’ll try to be more comfortable with that this year.”

It’s Rankin’s first trip to states. After finish 72nd as a freshman, he moved up to 40th last year, then wound up 15th in 18:04.4 last Saturday by cutting almost three minutes from last year’s district time. More significant was the 26-second improvement from his fifth-place finish at the KSAC Championships nine days before that at Clarion County Park.

“I knew if it was going to be close (and not make it), I was going to be destroyed and that pushed me to get in place If the runner in front of me was state-qualifying spot, I’d have to work my way up.”

And while he didn’t know it at the time, him catching and passing Brookville sophomore Calvin Doolittle in the final 400 meters or so punched his ticket to Hershey. Rankin beat Doolittle by two seconds, clinching the 10th and last non-team state-qualifying spot.

“He’s worked the whole season toward this, but at the KSAC meet, he came out and was 11th after the one-mile mark, then eighth and finished real strong so he had that fire going into today that he was going to qualify for states,” C-L head coach Nicole Oakes said. “We wanted him to live out what he was hoping for, but we weren’t sure what was going to come out of it exactly. Once we saw him at the one- and two-mile marks and he was right on the line, it was a stomach-turner to see where he was going to be.”

So for Rankin, it’s clearly peaking at the right time. He and teammate Brandon Smith had their own light workout the night before to stay loose when Oakes had given the team the day off.

“(Qualifying for states) was definitely a big thing when the year started but when I started placing at races, I realized it wasn’t as far out as I thought it would be,” Rankin said. “I had a big support from my team and they pulled me through. I was a nervous wreck before it started and they were coaxing me through and telling me to run my race and it would be fine.”

— The Lady Raiders wound up third for the second straight year, finishing well behind the top two teams which both advance their lineups to states. They scored 110 points with North Clarion running away with the title at 53 points. Cranberry was second with 96 points and the Lady Raiders edged fourth-place Kane by seven points.

“I really like the way things gelled toward the end of the season and I’m very happy with how they came on and progressed and what we’re looking at for next year,” Roseman said.

— The Lady Lions had two runners in action with sophomore Jessica McCracken finishing 35th in 24:10 and Morgan McNaughton crossing the line in 50th in 24:54.

— The Raiders not only came close to getting Doolittle to states, but returning state qualifier and senior Bryce Baughman was nearby, finishing just five seconds behind Doolittle and two spots back in 18th place in 18:11.

“Both boys were obviously disappointed to come so close to qualifying and missing by seconds,” Roseman said. “Both ran the best race of their lives and that’s all you can ask. We are very proud of both of them. I was satisfied with the team finish. I thought the guys had a very solid team effort.”

The Raiders finished sixth overall with Cranberry and Clarion capturing the state team berths with a 1-2 finish with a 43-78 differential with four-time defending champion Elk County Catholic finishing third and out of a state-qualifying berth for the first time since 2013. Smethport and Kane were 3-4 ahead of the Raiders.

— Clarion senior Nathaniel Lerch won the boys’ race in 16:50.7, almost three second ahead of Cranberry sophomore Matt Woolcook. The Berries put three of the top five runners across the line on their way to the team title.

— Oswayo Valley freshman Cheyenne Mehl won the girls’ race in 20:17.9, almost nine seconds ahead of Cranberry junior Kalynne Ziegler. North Clarion had six of its seven runners finish in the top 18 while runner-up Cranberry put three runners in the top 14.