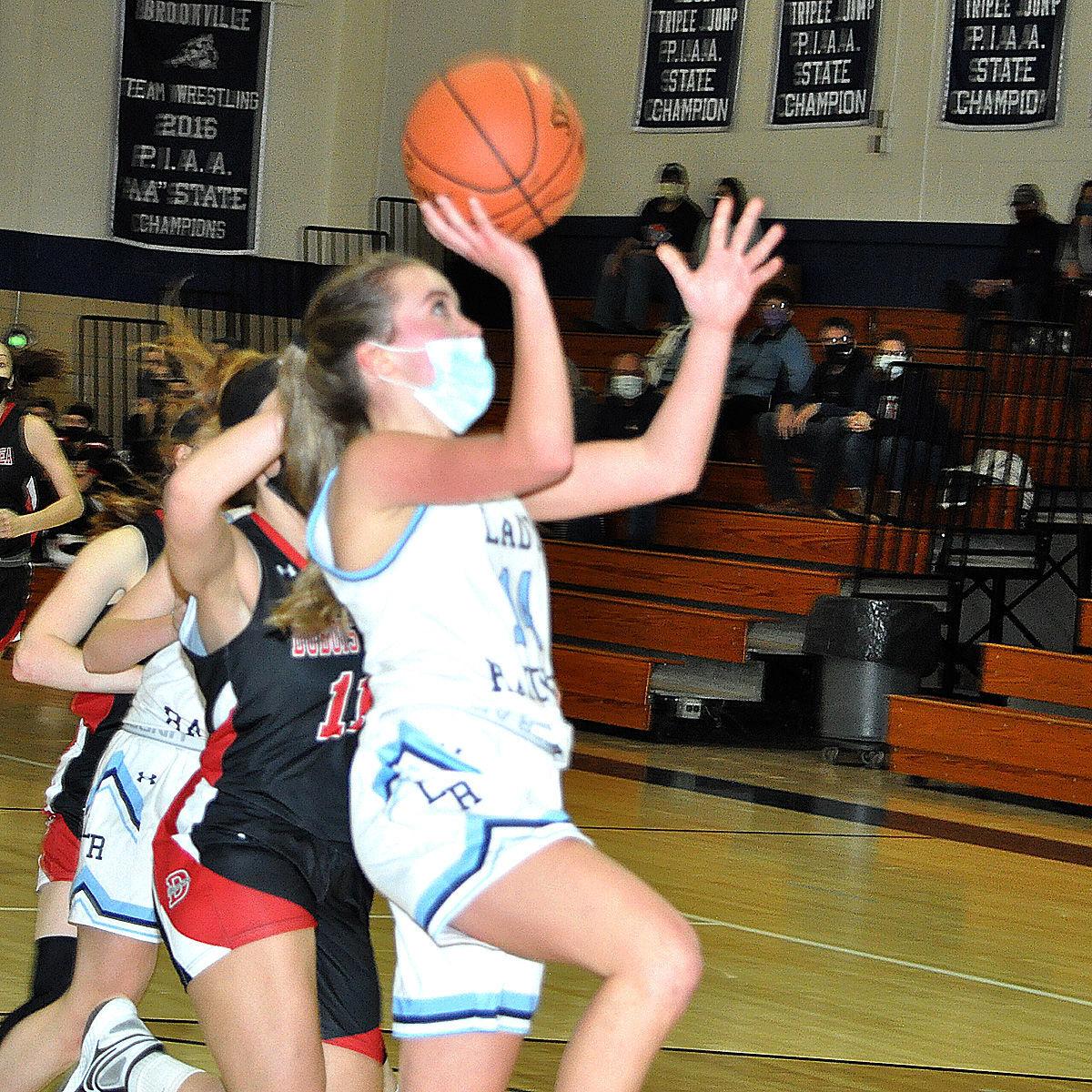 Brookville’s Eden Wonderling goes up for a layup during the second half of Tuesday’s game against DuBois. She scored six points. 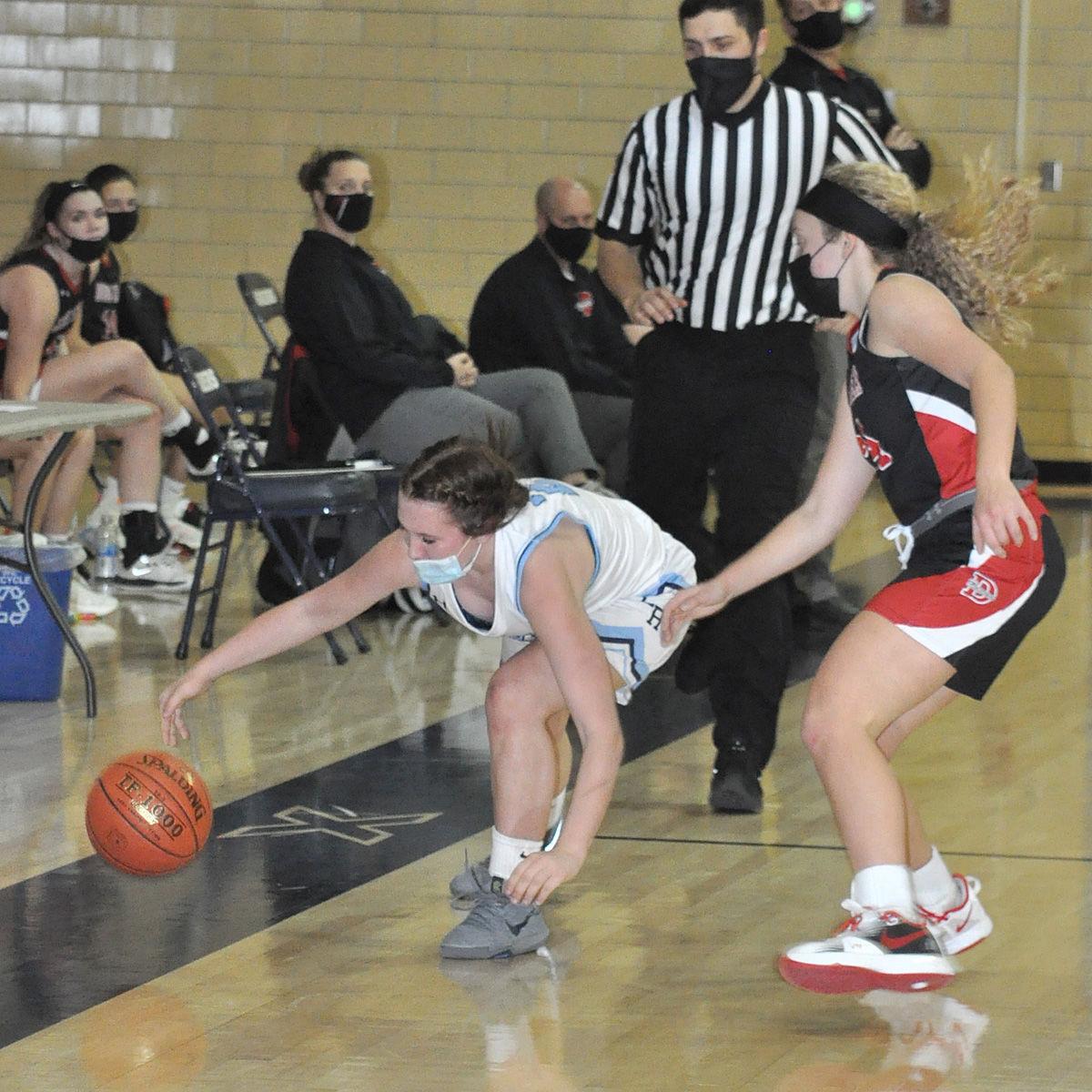 Brookville’s Elizabeth Wonderling tries to save a ball from going out of bounds during the second half of Tuesday’s game against DuBois. Wonderling scored a team-high nine points in a 63-21 loss to the Lady Beavers.

Brookville’s Eden Wonderling goes up for a layup during the second half of Tuesday’s game against DuBois. She scored six points.

Brookville’s Elizabeth Wonderling tries to save a ball from going out of bounds during the second half of Tuesday’s game against DuBois. Wonderling scored a team-high nine points in a 63-21 loss to the Lady Beavers.

BROOKVILLE — For one team, the season-opener finally came. For the other, it might as well been after a three-week layoff following a doubleheader opener back on Dec. 11.

Visiting DuBois forced 36 Brookville turnovers and cruised to a 63-21 rout Tuesday night. The Lady Beavers led 44-16 by halftime and set the PIAA Mercy Rule running clock — it’s now 30 points at any time after halftime — 35 seconds into the second half.

The loss dropped the Lady Raiders to 0-3 going into Wednesday night’s home game with Clearfield. Next Monday, they visit Karns City.

“Our schedule couldn’t get much tougher than the three teams we started with,” Brookville head coach Mark Powell said. “And that’s what we told our girls tonight. We thought their effort was great and there was improvement from the first two games (losses to Berlin and Penns Manor in December) and that’s what we’re looking for, to just get better. It’s not how you start, but how you finish. That’s our goal right now.”

The Lady Raiders were playing without three players who are battling illness or are injured — junior Jordan Cook, sophomore Reggan Olson and freshman Kerstyn Davie.

Head coach Keith Kriner welcomed the opener and got just about what he figured with some expected early schedule sloppiness with 25 turnovers of their own. But the Lady Beavers played a scrambling, aggressive defense that overwhelmed Brookville most of the night.

“We’re happy with the outcome, obviously, but we made a lot of mistakes,” Kriner said. “Hat’s off to Mark (Powell), we’re friends and he’s dealing with a lot of injuries right now and he had a hard time putting a team on the court and I’ve been in his shoes before. We’re trying something new this year obviously with the press and we usually don’t do that, but we have enough legs this year and we feel we can do that.”

DuBois only trailed 3-2, then ran away from Brookville and led 22-9 after the first quarter after forcing 14 turnovers. The Lady Beavers put up another 22-point quarter in the second and took the 28-point lead into the locker room with the turnover total up to 27.

With the running clock taking in effect just 35 seconds into the second half, the Lady Beavers outscored Brookville 5-1 in the third quarter and 14-4 in the fourth to set the final. Their biggest lead was the final score.

BIDS Vehicle is sold "As Is" 2006 Chevy Malibu Title

Meeting Notice The Reynoldsville Water and Sewage Authority has scheduled