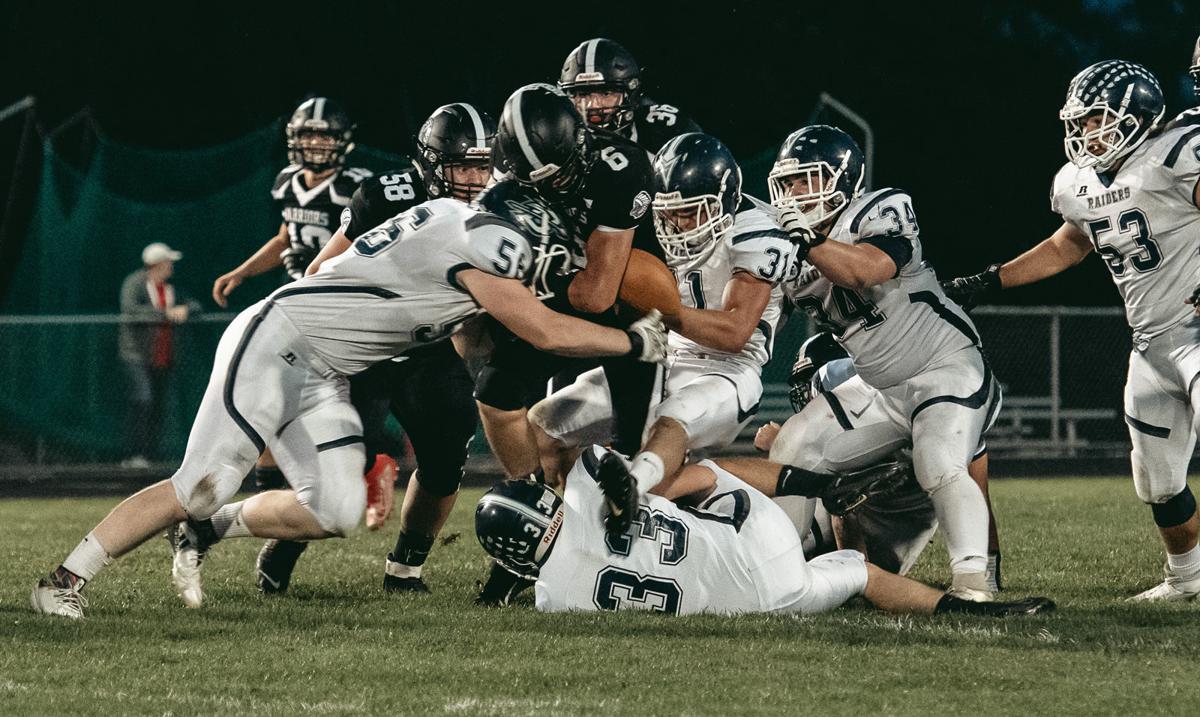 Moniteau’s J.D. Dessicino (6) is tackled by Brookville’s Nathan Taylor (56), Marshall Hunt (31) and Linkin Radaker (33) with other teammates closing in during Friday’s game in West Sunbury. The Raiders beat the Warriors, 21-8. 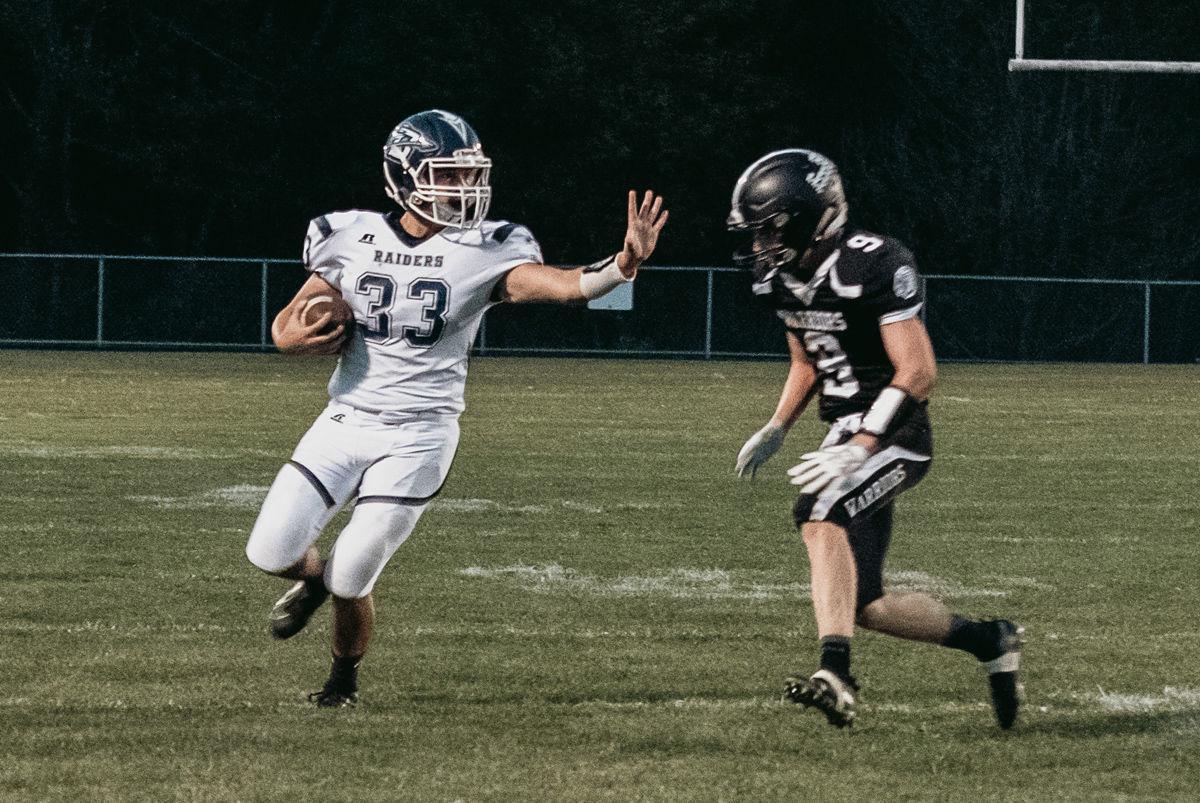 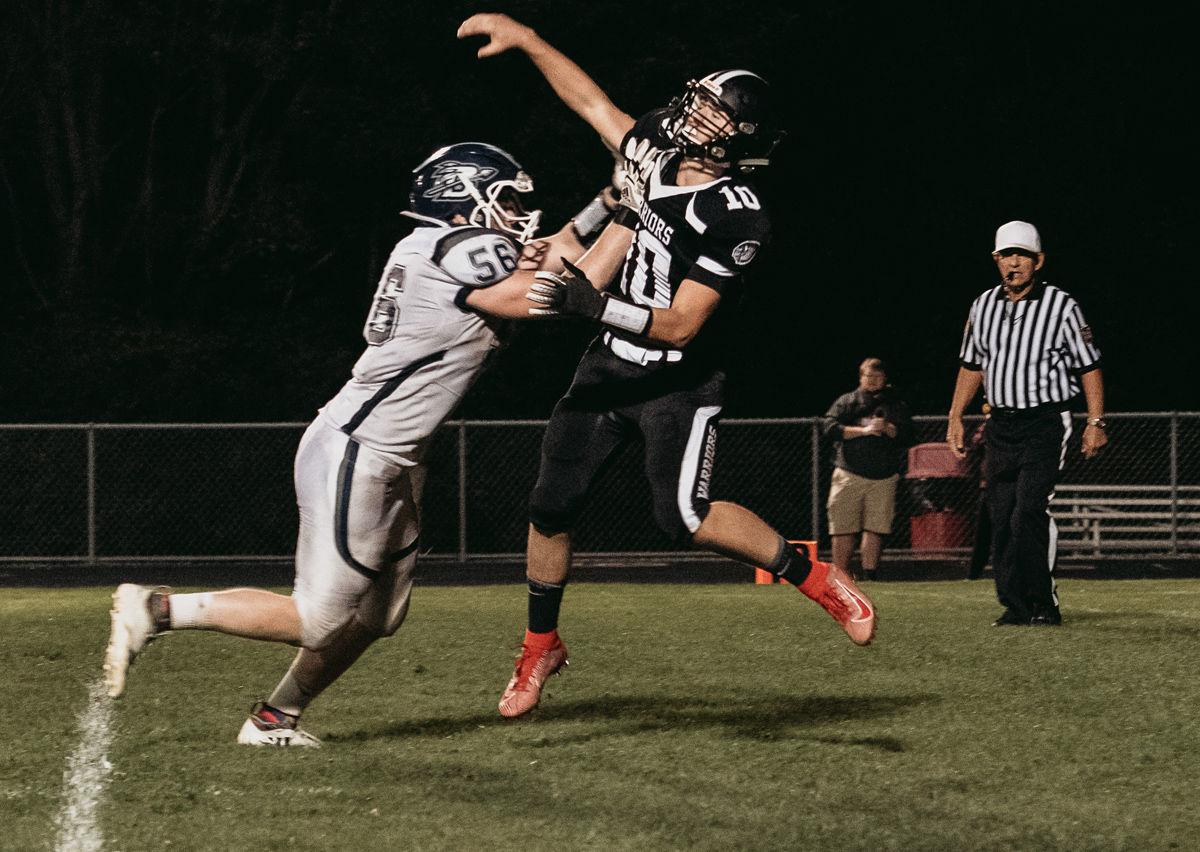 Brookville's Nathan Taylor gets to Moniteau quarterback Brady Thompson (10) after he gets a hurried pass off during last Friday's game.

Moniteau’s J.D. Dessicino (6) is tackled by Brookville’s Nathan Taylor (56), Marshall Hunt (31) and Linkin Radaker (33) with other teammates closing in during Friday’s game in West Sunbury. The Raiders beat the Warriors, 21-8.

Brookville's Nathan Taylor gets to Moniteau quarterback Brady Thompson (10) after he gets a hurried pass off during last Friday's game.

WEST SUNBURY — Going with the two-headed quarterback monster, the Brookville Raiders grinded out a 21-8 win at Moniteau last Friday night.

Starting with Robert Keth and working in Jack Krug, who was coming off an ankle injury he suffered two weeks ago against Clarion, the Raiders posted an effective 337-yard passing game between the two.

Running seven offensive series, Keth completed 21 of 32 passes for 192 yards with a touchdown and interception while Krug ran five possessions and completed 12 of 18 passes for 145 yards and two touchdowns.

The Raiders (5-1), who led 12-0 at the half thanks to Krug’s 24-yard TD pass to Keth as time expired, didn’t put the game away until the fourth quarter with a Krug 17-yard TD pass to Cole LaBenne and Donavan Hoffman’s 32-yard field goal.

Now it’s back to Brookville for Homecoming Friday night against 3-3 St. Marys.

“Two weeks in a row we had some adversity with some things not working,” Raiders head coach Scott Park said. “I thought we moved the ball pretty well in first half, but couldn’t get it in, but overall we’re 5-1 and we’ll regroup this weekend and get ready for homecoming.”

Eight different receivers caught passes for the Raiders, who scored on their first possession of the game. Keth tossed a flip pass to Ian Thrush going in motion and he raced into the end zone for the touchdown three minutes into the game. Thrush, coming off a big game at Karns City last week, finished with 13 catches for 111 yards.

The Raiders sputtered on their next two possessions, Keth getting intercepted and the Raiders stalling on downs at the Moniteau 15. But their defense bent, but didn’t break on two Moniteau drives that stopped on down at the Raiders’ 30 and 23, the second a lost fumble that led to the Raiders’ second touchdown.

Going 77 yards on nine plays, Krug’s first series of the game found the end zone. A tipped pass caught by Kyle MacBeth for 34 yards — he finished with six catches for 103 yards — got the Raiders to the Moniteau 29. Another 10-yarder to MacBeth and three incompletions with a delay of game penalty put the Raiders at the 24 with one play left.

Keth and Krug connected on a go-route down the left sideline, with Keth doing a good job staying inbounds on a perfectly thrown pass into traffic.

“(Jack) wasn’t laser sharp, but was good enough and we moved the ball with him,” Park said. “When he’s in there, that gives us all of our receivers and he hit Robert on a nice go-route at the end of the first. That’s what we need to do, to work him back into things where he’s 100 percent.

“That was a huge play and it gave us a lot of momentum and put them behind the eight ball.”

But Moniteau scored first in the third quarter, setting up with good field position following a 30-yard punt return and Raiders penalty that put the Warriors at the Raiders’ 25. Two plays later, J.D. Dessicino ran 24 yards for the touchdown at the 5:28 mark. Mason Mershimer made it 12-8 with his two-point conversion run.

But the Raiders’ defense tightened up from there and held Moniteau to two three-and-out possessions after that and put the game away when Krug hit Cole LaBenne with a 16-yard screen pass to make it 18-8 with 6:34 remaining.

Interceptions by Robert Keth and Ian Thrush stopped the next two Moniteau possessions and Donavan Hoffman finished off the scoring with a 26-yard field goal with 34 seconds remaining.