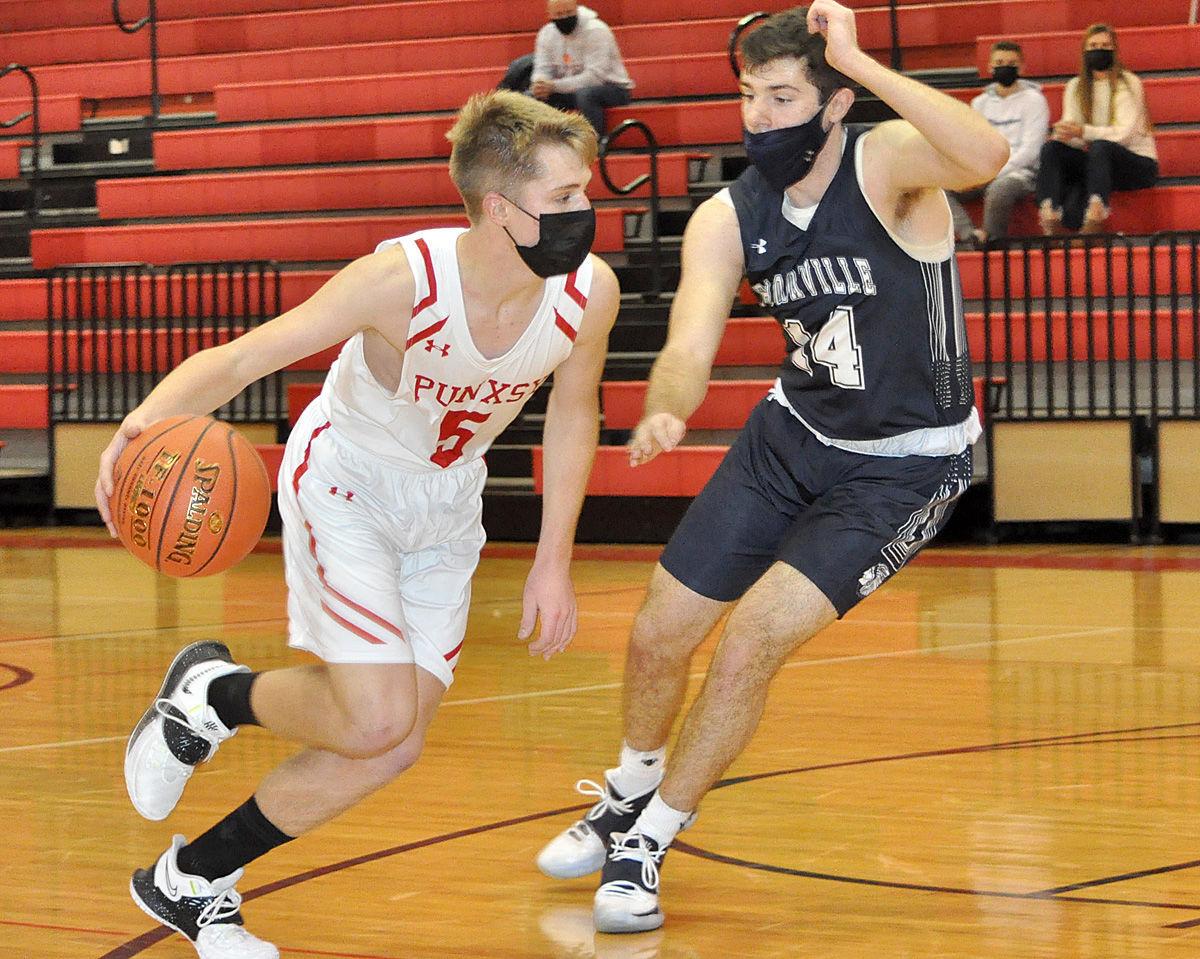 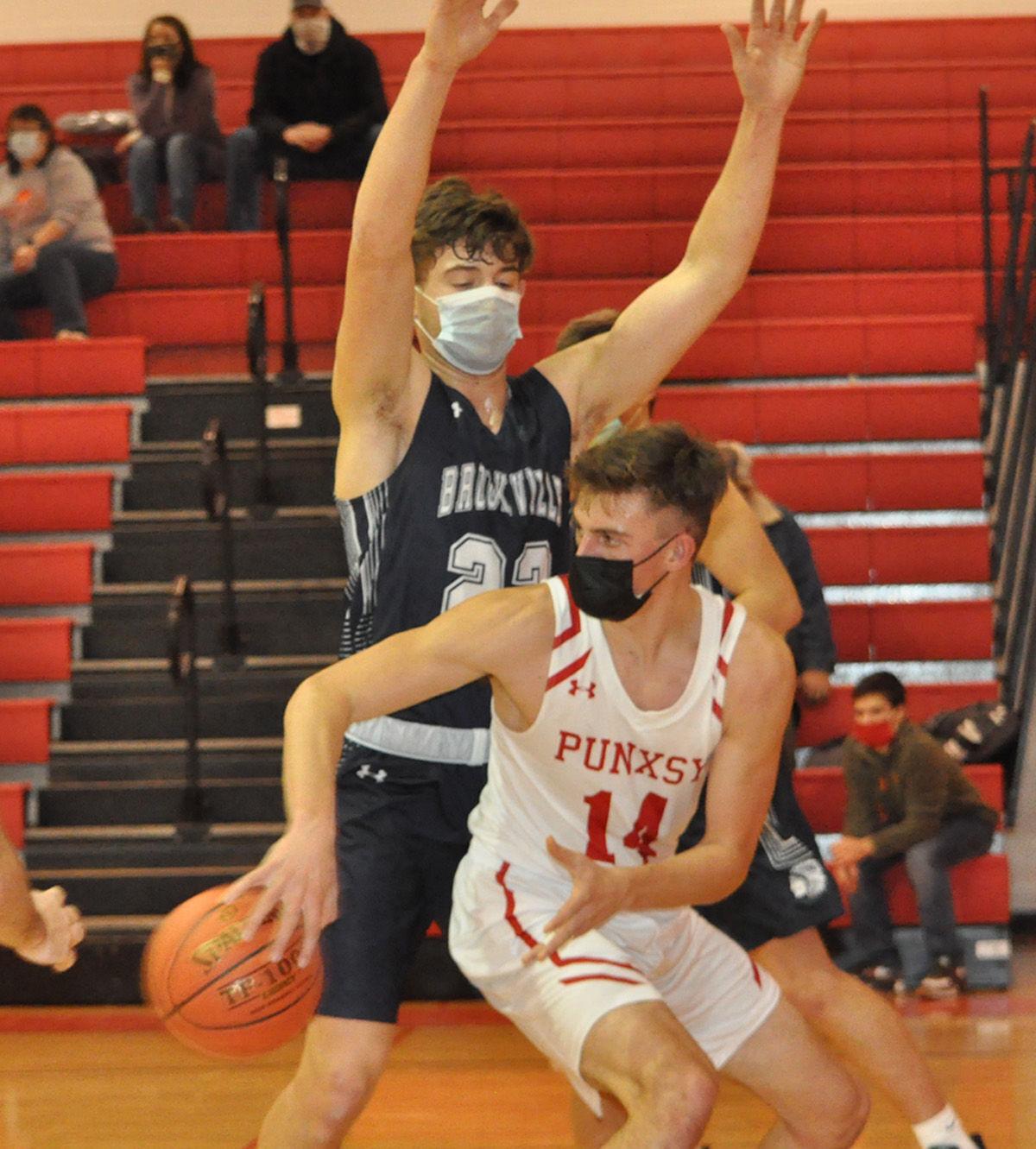 Brookville’s Griffin Ruhlman (back) bodies up against Punxsutawney’s Ethan Presloid during Friday’s game. Ruhlman finished with 15 points and eight rebounds.

Brookville’s Griffin Ruhlman (back) bodies up against Punxsutawney’s Ethan Presloid during Friday’s game. Ruhlman finished with 15 points and eight rebounds.

PUNXSUTAWNEY — In a lot of ways, it felt like had been four weeks since the Brookville Raiders basketball team last played a game on the basketball court.

Of course, few teams in the state could say they’re 3-0 thanks to the Raiders’ doubleheader sweep of Penns Manor and St. Joseph’s Catholic Academy back on Dec. 11, but it was back to the beginning again after last Friday night’s 66-42 win at Punxsutawney.

The Raiders used a late second quarter run to hike their lead to 11 points at 36-25 before outscoring the Chucks 30-17 in the second half.

And the Raiders shot it well, drilling 22 of 39 shots for 56.4 percent. That offset some turnover troubles with 18 that was forced by a hustling Punxsutawney defense under first-year head coach and Brockway native Jake Perrin.

All of it wrapped up into a package that looked like two teams coming off a long layoff.

“Oh, we have lots to do,” Raiders head coach Dalton Park said. “Coming off a long break at this time of year, we’re out of shape. That’s the first part and once we get in shape, things will come better for us. The 18 turnovers is too many. We can run and that’s something we do very well, but tonight we got nervous and didn’t handle the pressure.

“We got a lot of easy points out of hurrying, so it wasn’t all bad, but we can definitely do better.”

The Chucks got 12 points each from Gabe Kengersky and Andrew Young. Kengersky nailed 3 of 5 3-pointers in the second quarter as the Chucks went to the break 6-for-20 from downtown.

While the Raiders led from start to finish, the Chucks cut it to 30-25 on a Kengersky free throw with 59 seconds left before halftime. The Raiders put up six points unanswered points, including a Lauer putback of a Miner missed 3-pointer before the buzzer. The double-figure lead loomed large moving forward.

“Brookville has a good program over there and with the way our guys played tonight, if we don’t give up those quick six points before halftime and it’s a little tighter, this game might have ended up a little closer toward the end,” Perrin said. “But overall, we saw all the things that we wanted to see tonight, so I’m not worried too much about it.”

Park agreed with the half-ending run.

“What that let me do at halftime, and we talked to the guys and I was going to run with them in the first half, but the second half we weren’t and we wanted to make them play defense for a couple minutes and the first few possessions that’s what we wanted to do,” Park said.

The Chucks were just 2-for-12 from beyond the 3-point line in the second half. The Raiders led 52-36 going into the fourth quarter before a 14-6 edge closed things out with the largest lead of the night.

The Raiders visit Curwensville Wednesday. From there, the Raiders host Sheffield Friday before two road games next week at DuBois Monday and Homer-Center for a varsity-only matchup Wednesday.