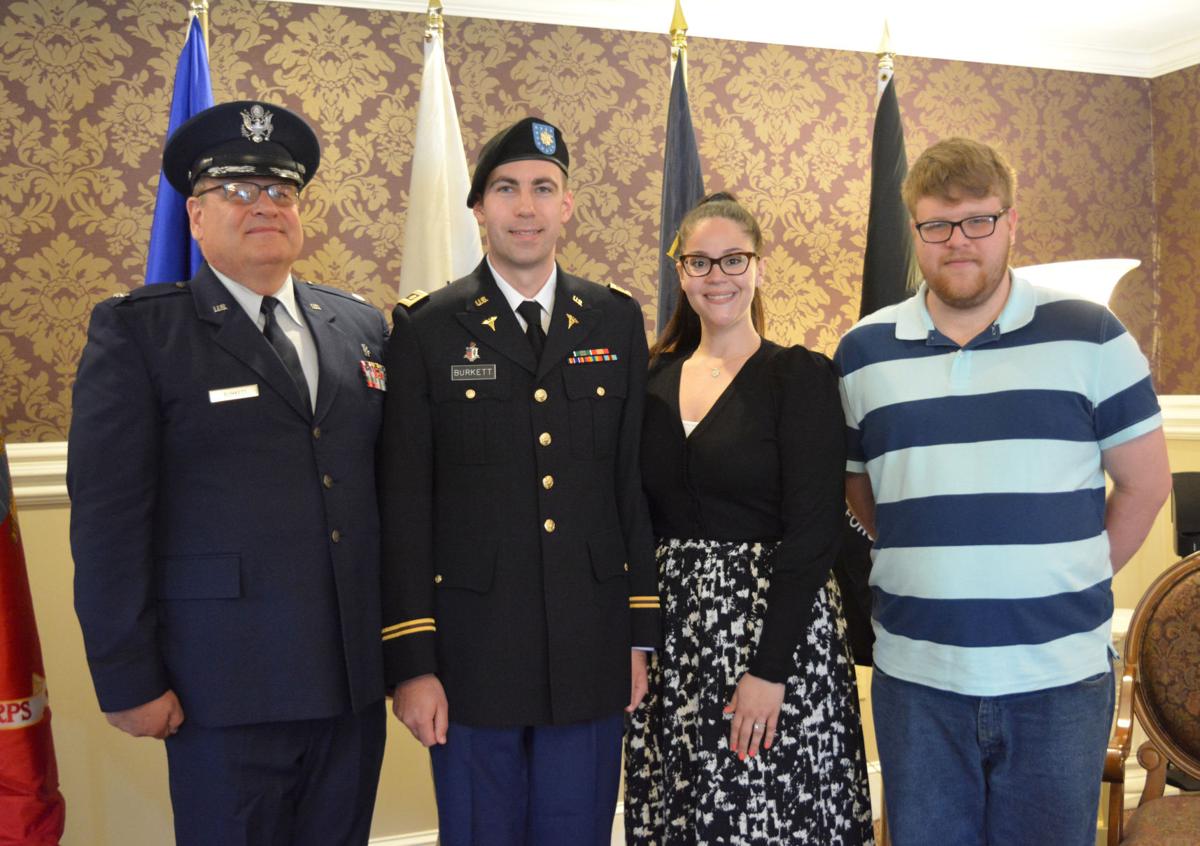 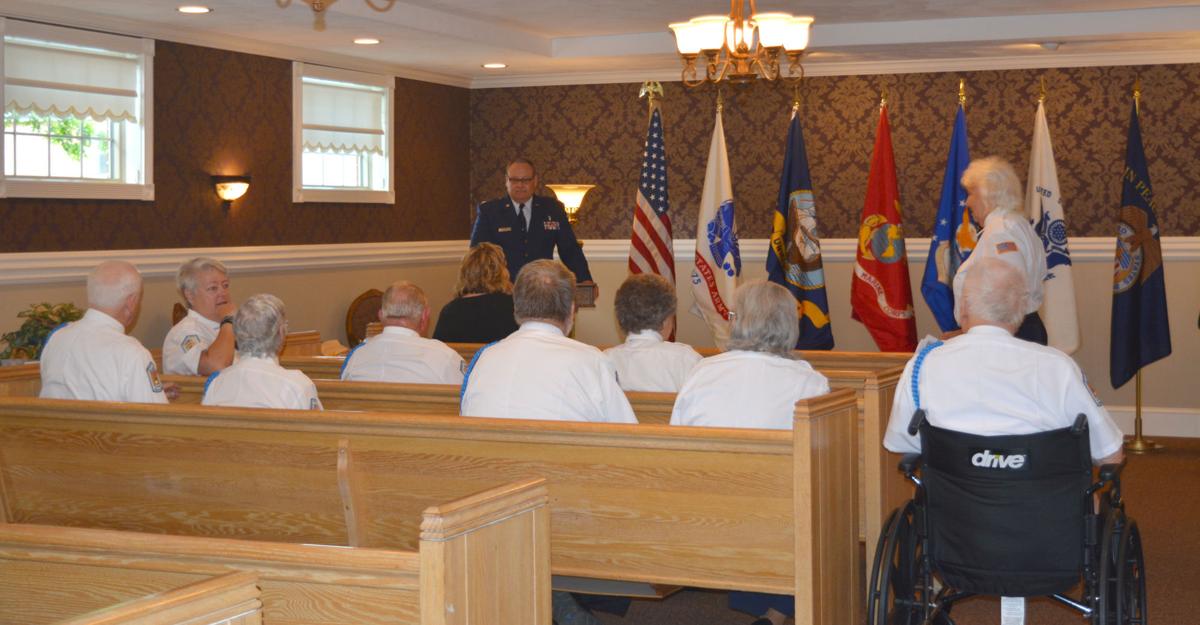 Ken Burkett addresses the audience of the promotion ceremony, which was largely made up of Jefferson County Honor Guard members. 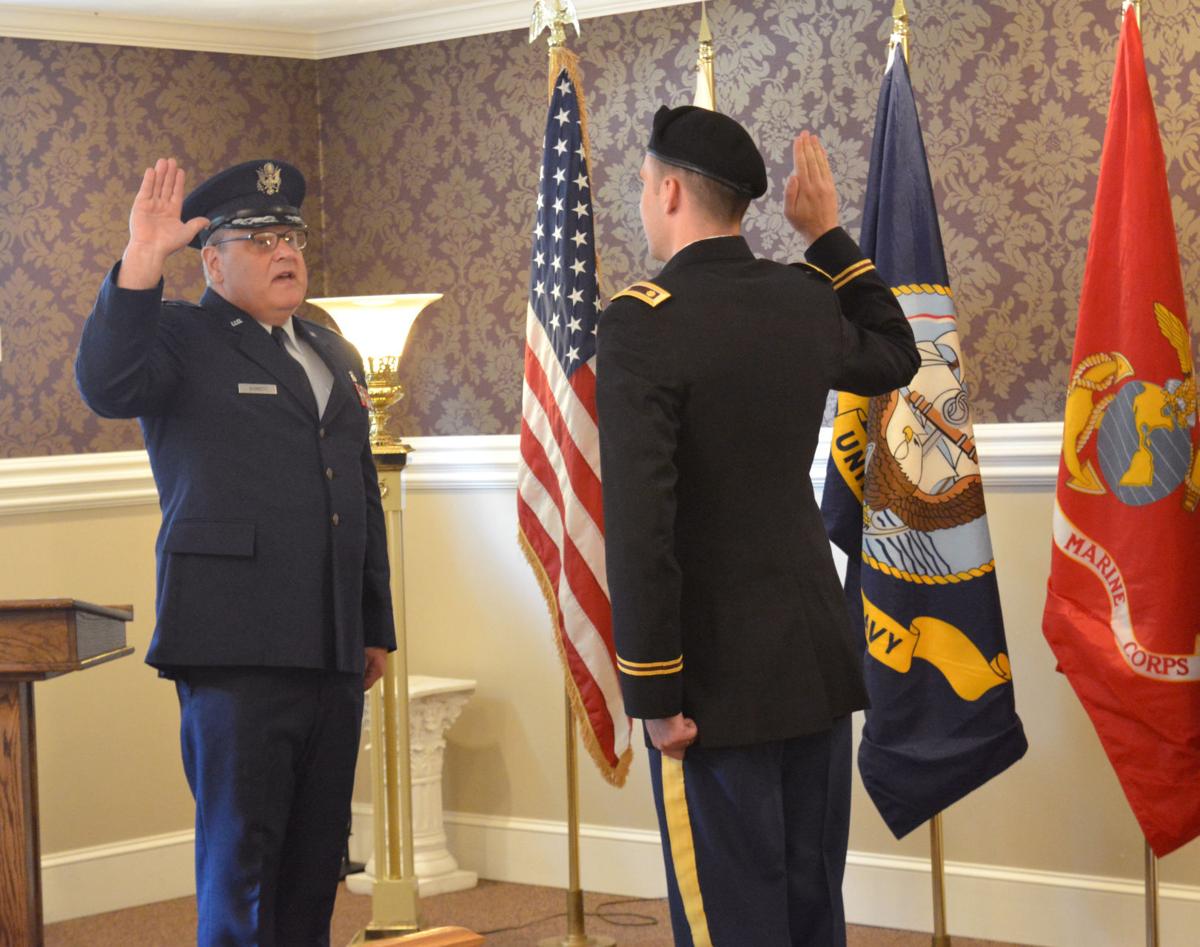 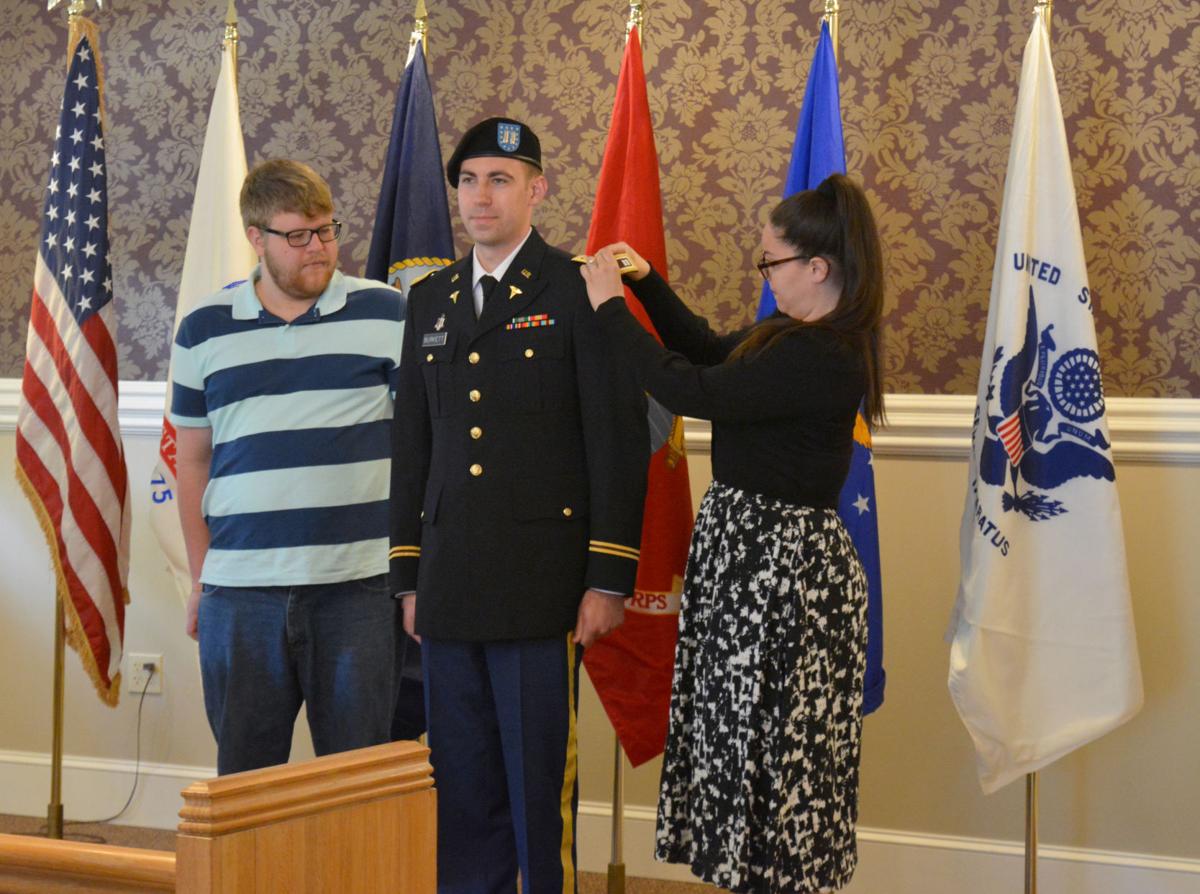 Adam Burkett stands as his brother Matthew Burkett and wife, Sasha Burkett change his rank on his uniform from captain to major.

Ken Burkett addresses the audience of the promotion ceremony, which was largely made up of Jefferson County Honor Guard members.

Adam Burkett stands as his brother Matthew Burkett and wife, Sasha Burkett change his rank on his uniform from captain to major.

PUNXSUTAWNEY — The Jefferson County Honor Guard gathered at the Shumaker Funeral Home in Punxsutawney last week for a ceremony for U.S. Army Capt. Dr. Adam Burkett, who was promoted to major.

His father, retired U.S. Air Force Medical Service Corp. Lt. Col. Ken Burkett, arranged the ceremony, wanting it to both honor his son’s accomplishment, and honor the veterans of the Honor Guard.

The ceremony was to honor Burkett’s promotion to Major in the United States Army Medical Service.

“I’m very honored to be appointed to this position of higher responsibility,” Adam Burkett said. “There’s a lot of people that have helped get me to this position… So I thank all the veterans who attended today. Without what you’ve all done, I couldn’t be doing what I’m doing right now. I thank my father, my brother, and my late mother who couldn’t’ be here today, but without them I couldn’t be the person I am.”

Burkett graduated from Penn State University with a Bachelor’s of Science degree in 2011. He received his commission as a second lieutenant in the U.S. Army and attended the West Virginia School of Osteopathic Medicine where he received his medical degree in 2015. He was then assigned to Brooke Army Medical Center in San Antonio, Texas from 2015 to 2018, where he received specialty training in internal medicine.

Following his residency, Burkett was assigned to the second cavalry regiment as the squadron surgeon from 2018 to 2021 in Germany. While assigned to 2CR, he deployed to the Republic of Georgia and Poland.

His next assignment is at Walter Reed National Military Medical Center where he will attend the Uniformed Services University as a Master’s of Public Health candidate. Burkett is a board certified internist.

He married his wife Sasha Burkett Perez, who he met while attending Penn State. They have been married since 2017. Sasha Burkett is an educator who has taught middle school science and soldiers wishing to advance their careers.

“This room today is filled with many veterans of past conflicts, who through their selfless acts and personal sacrifices kept the nation free from the tyrannies from those who sought to take our precious freedoms away from us,” Ken Burkett said. “Although we’re from different services, together we are one team, one fight, with one common mantra; duty, honor, and country.”

Ken Burkett also took time to acknowledge the role of the military spouses and families, and their sacrifices so their family can serve. He referred to them as the ones who stay behind to “keep the home front running like a well-oiled machine.” He thanked Adam’s wife, Sasha Burkett, for her role in Adam’s hard work and promotion.

Punxsutawney local Dawn Kopp sang the “Star-Spangled Banner” and gave the invocation before turning the floor over to Ken Burkett to perform the promotion ceremony for his son.

Burkett then prepared to publish the promotion orders, but first shared the importance of such a promotion.

“You have proven to your leadership that you are ready to move on to the next level of your career, and to personally take on a larger part of the mission,” Burkett said. “These ceremonies not only serve to honor, but they also serve to remind us of our core values and our military heritage.”

Sasha and Adam’s brother, Matthew, came forward and removed the rank of captain from his shoulders, and replaced it with the rank of major.

Ken Burkett administered the Oath of Office to his son as the final step of the ceremony.