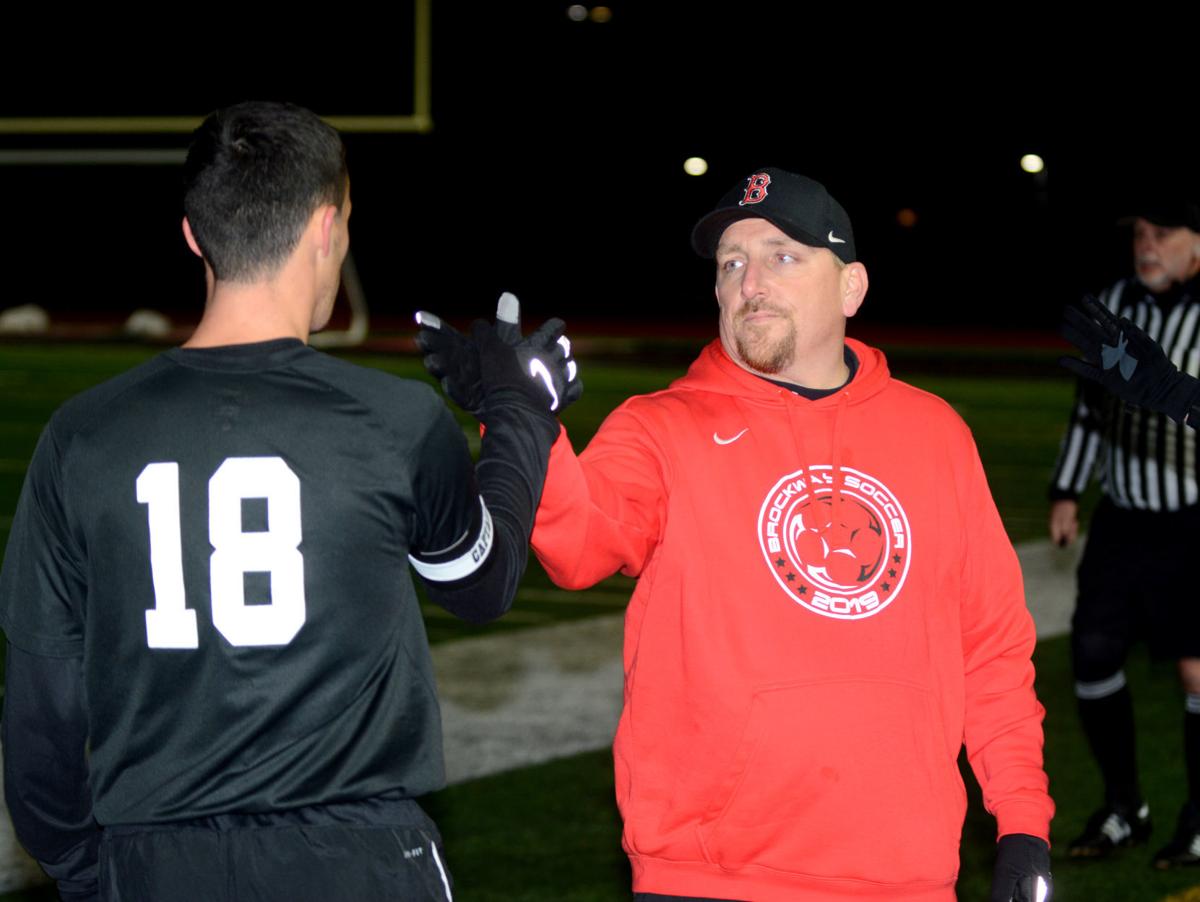 Brockway head coach Andy Daugherty, right, shakes hands with Nathan Bennett (18) after he took the senior out in the closing minutes of Tuesday’s PIAA Class A first round game against Springdale. Bennett, along with fellow senior Linkin Nichols, played their final games in a Rover uniform in a 3-0 loss to the Dynamos. 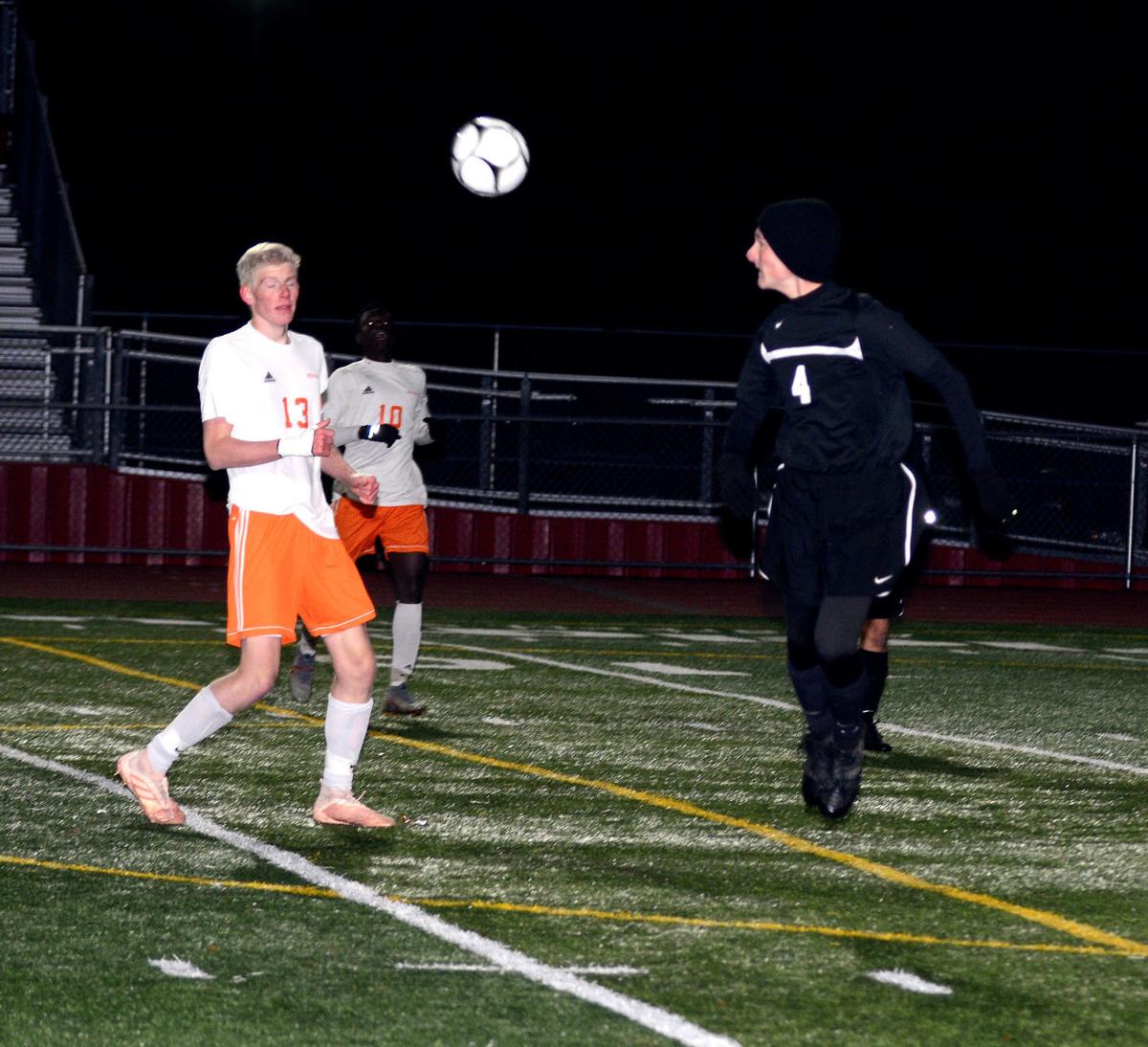 Brockway defender Eric Young (4) heads the ball away from his own box in front of Springdale’s Alexander Barch (13) during first-half action Tuesday in a PIAA Class A first round game. 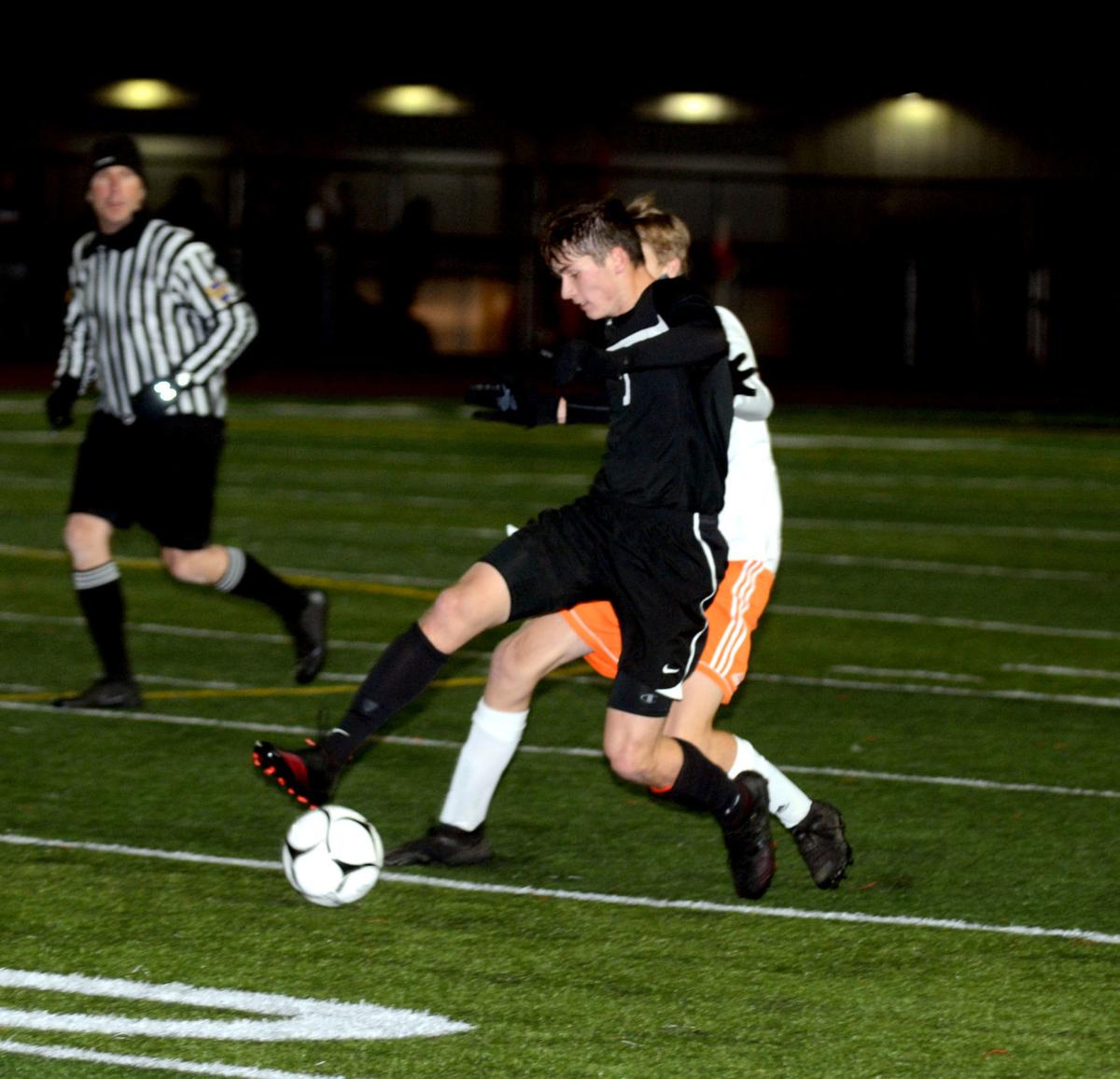 Brockway's Jared Marchiori, front, battles for the ball in the midfield against a Springdale player Tuesday in a PIAA Class A first round game.

Brockway head coach Andy Daugherty, right, shakes hands with Nathan Bennett (18) after he took the senior out in the closing minutes of Tuesday’s PIAA Class A first round game against Springdale. Bennett, along with fellow senior Linkin Nichols, played their final games in a Rover uniform in a 3-0 loss to the Dynamos.

Brockway defender Eric Young (4) heads the ball away from his own box in front of Springdale’s Alexander Barch (13) during first-half action Tuesday in a PIAA Class A first round game.

Brockway's Jared Marchiori, front, battles for the ball in the midfield against a Springdale player Tuesday in a PIAA Class A first round game.

HYDE — The Brockway and Springdale boys soccer programs met in the state playoffs for the second time in three years Tuesday night, and this time around it was the Dynamos who came away with a 3-0 victory at the Bison Sports Complex in the opening round of the PIAA Class A postseason.

The teams last met in the 2017 state quarterfinals, with a veteran Rover squad edging a young Springdale squad, 2-1, to reach the state semifinals for the first time in school history.

Those roles were reversed Tuesday evening, as Springdale — the WPIAL third place team — came in with the veteran roster while Brockway featured a young side that featured just a handful of upperclassmen who played in that 2017 matchup.

And, it was a pair of Dynamo senior captains who helped power Springdale to victory in Michael Mitchell and Alexander Barch. Mitchell scored twice — once in each half — while Barch added a second half goal to help propel Springdale into Saturday’s state quarterfinals.

Those three goals proved to be more than enough against a Brockway side that struggled to get its offense going. The Rovers recorded just six shots, four in the second half, with Dynamos keeper Andrew Haus making six saves to record the shutout.

“They (Dynamos) did a pretty good job possessing the ball, and we didn’t get too many (offensive) opportunities like we normally do,” said Brockway coach Andy Daugherty. “I knew coming in it was going to be this type of game. I’m just proud of this young team getting this far and putting up a good fight.

“I think we held them in check for the most part, and I think an underestimated part of our season is how well our defense has played. It was real solid and we don’t give up many shots.

“Like I told the guys, we took one on the chin tonight, but you have to learn from it. Most of this group has at least one more, if not two more years to have shots at this (states). We just earn from it and see where our game has to improve and move on from there and get better.”

Springdale (17-4) came out and seized control of the action in the first 10 minutes, creating a couple good scoring chances during that stretch.

Brockway keeper Lewis Painter was pressed into duty early on, making a save just past the 4-minute mark. Painter stopped another long-range shot in the eighth minute before denying a hard shot by Barch in the 10th minute.

The Rovers (12-6-1) mustered just one shot in the opening 10 minutes, an effort from the right side that sailed just wide of the Dynamos net.

The ensuing 15 minutes were largely played between the 18s before both sides created a couple scoring opportunities in the final 16 minutes of the half.

Painter stopped a shot by Mitchell in the 24th minute before Haus came up with a huge stop in the 28th minute off a Rover corner kick.

Marcus Bennett took that corner and placed a perfect pass into the box that teammate Noah Bash one-timed. However, Haus blocked the close-range shot and his defense was able to clear the ball out of harms way when it was played back in.

Springdale then made a strong push up the field, scoring just over a minute later when Mitchell blasted a shot into the back of the net with 11:33 left in the half.

The Dynamos took that 1-0 lead into the half and quickly doubled that advantage when Barch scored just 3:26 into the second half. Springdale kept the pressure on, but Painter turned away a pair of Mitchell shots over the ensuing two minutes.

Brockway had its first scoring chance of the second half 9:00 in when it earned a direct kick outside the top right corner of the Dynamos box. However, that long-range shot by Bennett was stopped by Haus.

And, just like in the first half, Springdale countered a near-miss for Brockway with a goal for itself as Mitchell netted his second of the game just 1:07 after the direct kick. The goal was an impressive one, as Mitchell took a shot near the right sideline and somehow found the top left corner of the Rover net.

That proved to be the final goal of the game.

Painter made one more save over the final 29 minutes, while the Dynamos had a couple shots be just off the mark.

On the other end, Haus saved a second direct kick opportunity for Bennett with 8:25 to play, then saved another shot from Bennett from the right side of the box with 3:11 remaining.

The Springdale keeper made one final stop in the final minute, denying an effort by Dylan Antonuccio to preserve his shutout.

The game was the final one for the Brockway senior duo of Nathan Bennett and Linkin Nichols, both of whom were part of the 2017 victory against Springdale.