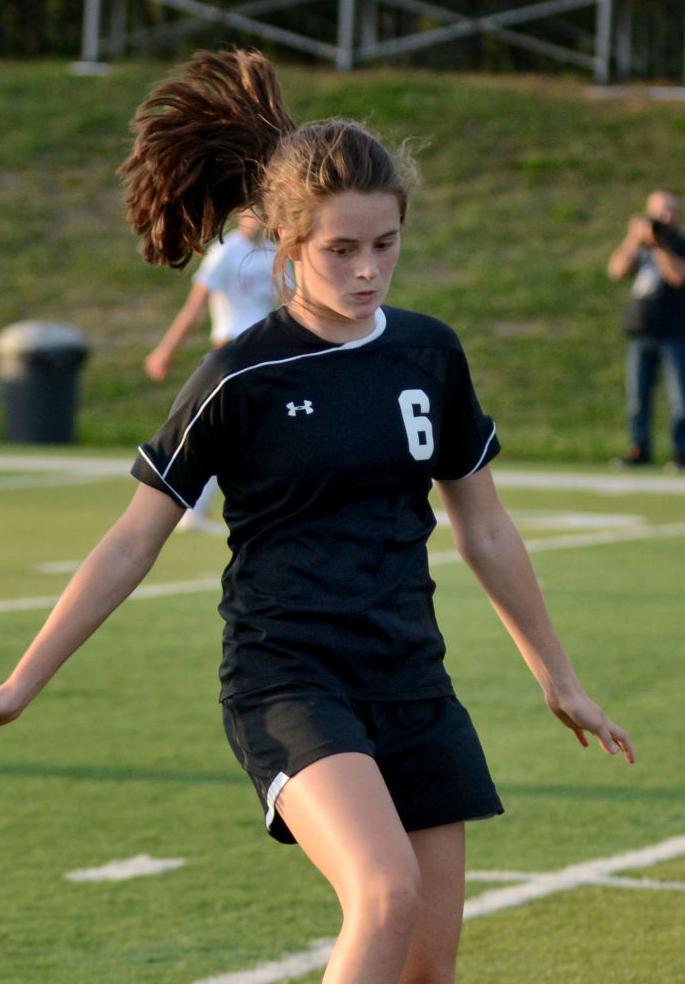 Brockway’s Morgan Lindemuth slips a pass to a teammate on the outside during second half action Thursday against Elk County Catholic. Lindemuth had a goal and assist in her return to the Lady Rover lineup in a 4-1 victory. 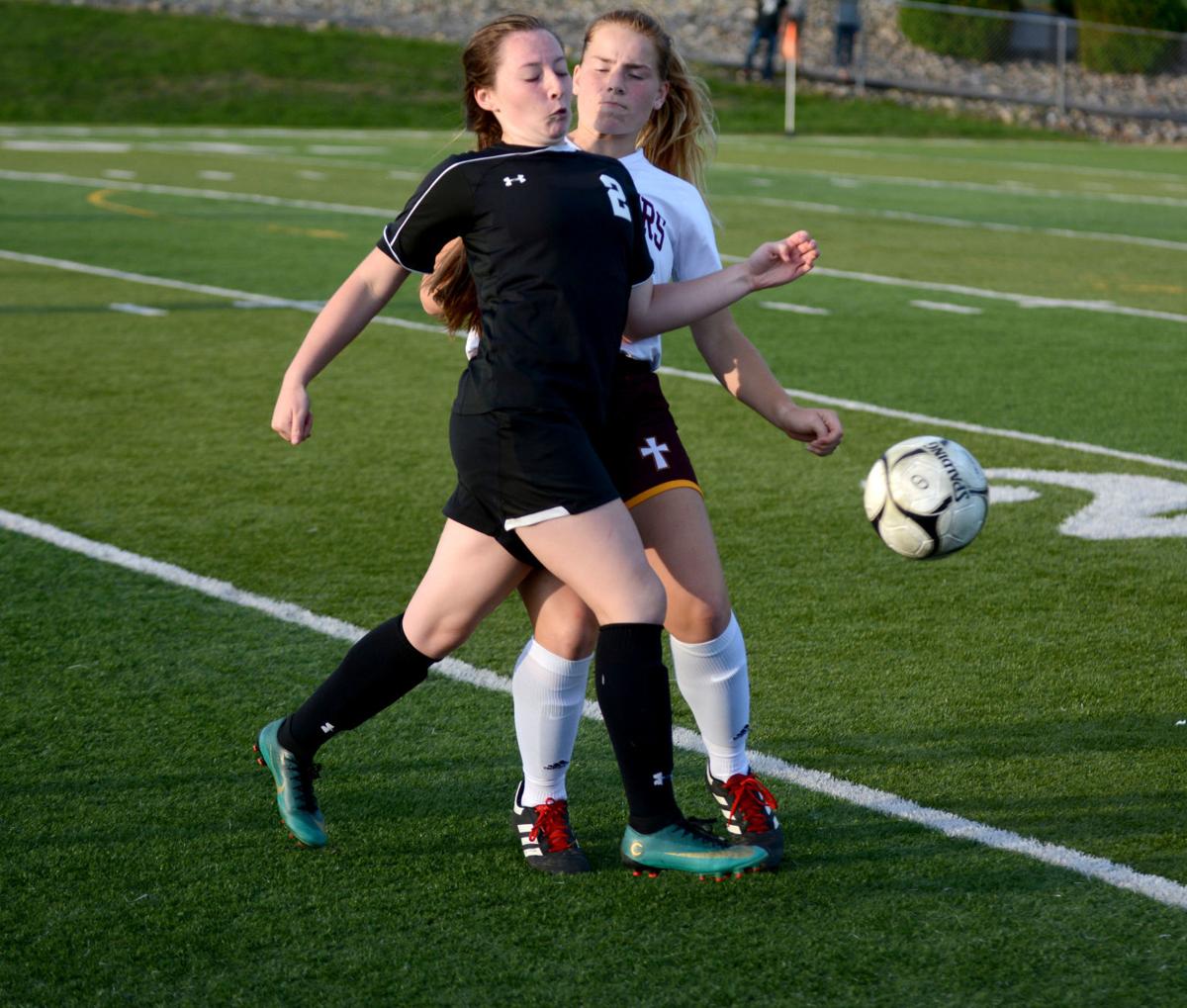 Brockway’s Danielle Wood (2) redirects a throw-in while on the run past Elk County Catholic defender Emily Wolfe during second half action Thursday night. 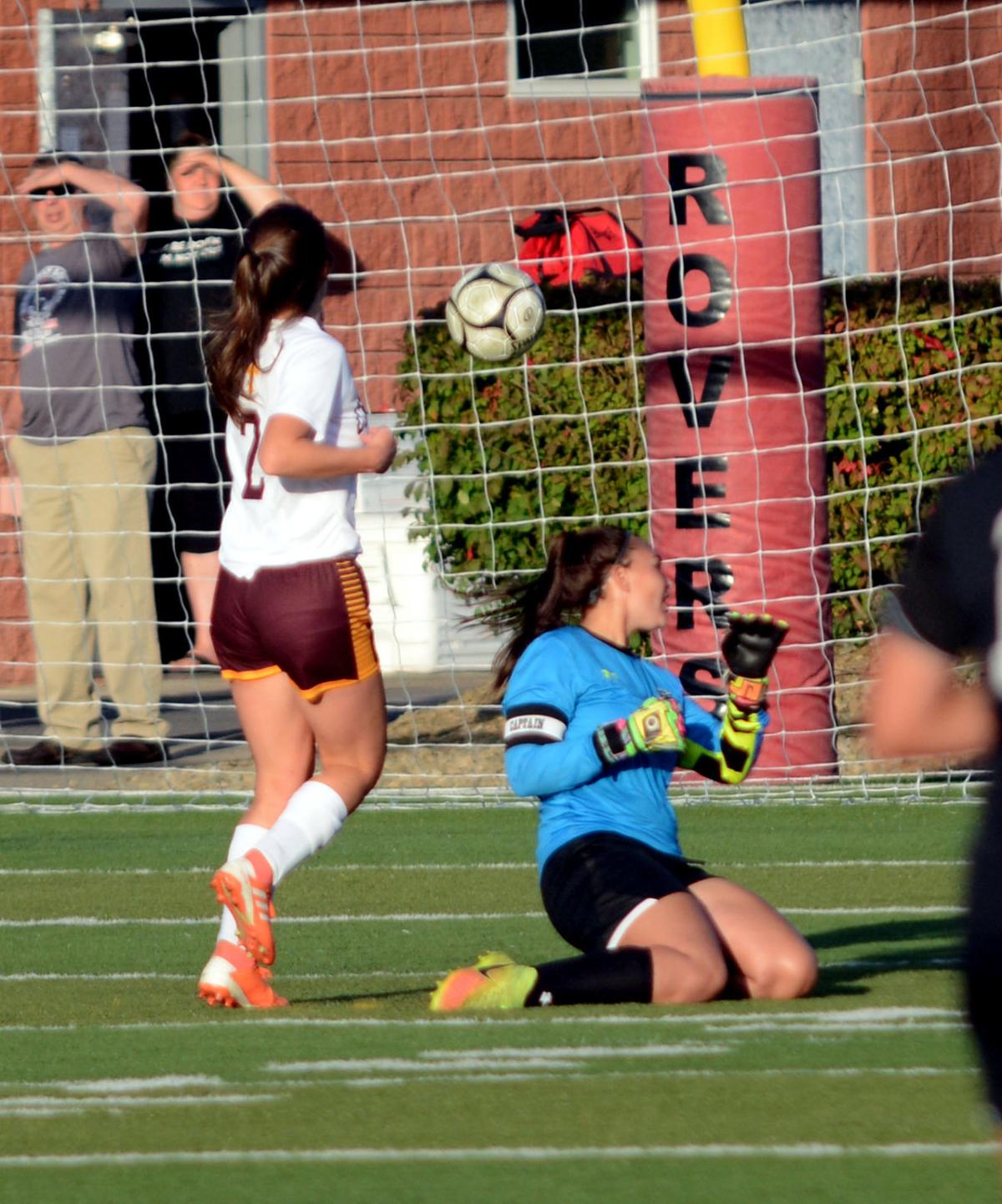 Elk County Catholic’s Gina Carnovale (2) watches the ball sail towards the net for a goal late in the first half Thursday after chipping a shot over Brockway keeper Mackenzie Overbeck as she came to challenge the shot.

Brockway’s Morgan Lindemuth slips a pass to a teammate on the outside during second half action Thursday against Elk County Catholic. Lindemuth had a goal and assist in her return to the Lady Rover lineup in a 4-1 victory.

Brockway’s Danielle Wood (2) redirects a throw-in while on the run past Elk County Catholic defender Emily Wolfe during second half action Thursday night.

Elk County Catholic’s Gina Carnovale (2) watches the ball sail towards the net for a goal late in the first half Thursday after chipping a shot over Brockway keeper Mackenzie Overbeck as she came to challenge the shot.

Brockway scored three times, two by senior Chanell Britten, in the that opening 30-minute stretch while also having a handful of other prime chances to extend that lead.

Elk County, which played the first half largely on its defensive side of the field, withstood that constant pressure by the Lady Rovers and got a goal back late in the half when Gina Carnovale scored on just ECC’s second shot of the opening 40 minutes.

Any momentum ECC got from the score was quickly taken away by Britten when she completed a hat-trick with her third goal of the game just 3:18 into the second half.

The remainder of the game was played mostly in the midfield as both sides struggled to get into any type of offensive flow in the final 35 minutes as the Lady Rovers finished off the three-goal victory to improve to 5-0 on the season.

“There was like a 15 to 20-minute stretch in the first half where we started to look really good, and then we started to get sloppy and playing kickball again,” said Brockway coach Jessica Leadbetter. “We got two really nice assists from Taylor (Little) on goals by Britten. We’ve working on feeding the ball and through balls, chips, and with some of our injuries looking for some other girls to step up and take initiative, and I thought she (Little) did that tonight.

“We also got Morgan Lindemuth, which will be big. She’s played pretty much every position on the field for us, and she’s up for anything and play wherever we need her.”

Brockway gained control of the game’s tempo in the opening minutes and really got going after the 10-minute mark.

Morrigan Decker had the lady Rovers’ first real scoring chance when she took a cross from Britten and fired a shot over top the net in the 12th minute. Britten then hit the post with a shot in the 16th minute, while ECC keeper Allison Geci stopped a long shot by Decker shortly thereafter to keep it scoreless.

Brockway finally broke the ice just past the 18-minute mark when Britten took a pass from Taylor Little in the midfield and blasted a shot from about 25 yards out past Geci to make it 1-0.

The duo teamed up again less than three minutes later. This time Little threaded a through to Britten on the move, and Britten dribbled in on goal before blasting a shot into the back of the net to put the Lay Rovers up 2-0 with 19:12 left in the half.

Danielle Wood nearly made it 3-0 just over a minute later when Decker found her with a cross in the box. However, Wood’s shot rolled just wide of the far post.

Brockway had another opportunity turned away in the 25th minute when Geci stopped Morgan Lindemuth’s header off a corner kick.

Lindemuth, making her return to the lineup after being injured in the season-opener at Clarion, didn’t miss on her next chance, as she took a pass in the box from Britten and slid a shot inside the right post for a 3-0 Lady Rovers’ lead with 11:37 remaining in the half.

Elk County recorded both of its first-half shots in the final six minutes.

Olivia Sorg had a long direct kick stopped by Brockway keeper Mackenzie Overbeck with 5:52 on the clock. Carnovale didn’t miss on her chance though, as she found herself all alone with the ball 68th minute.

Overbeck came out near the top of the box to challenge Carnovale’s shot, and the Lady Crusader was able to loft it over the keeper and looked on as it sailed into an open net with 2:05 left in the half to pull ECC within two at 3-1.

Elk County mustered two more shots the rest of the way, with Overbeck stopping a hard shot from Carnovale in the 58th minute.

Meanwhile, Britten’s goal early in the second half all but put the game away with how things played out. Lindemuth set up the score with a long cross from one side of the field to the other to Britten, who made a run on night and blasted a shot in the right corner.

Brockway had a couple scoring chances in the final 14 minutes, but Lindemuth had a shot stopped by geci, while Katie McMeekin and Amanda Decker each had shots sail just over the crossbar.

The Lady Rovers are in action Saturday at Hollidaysburg for a noon game, while ECC hosts Brookville on Monday.