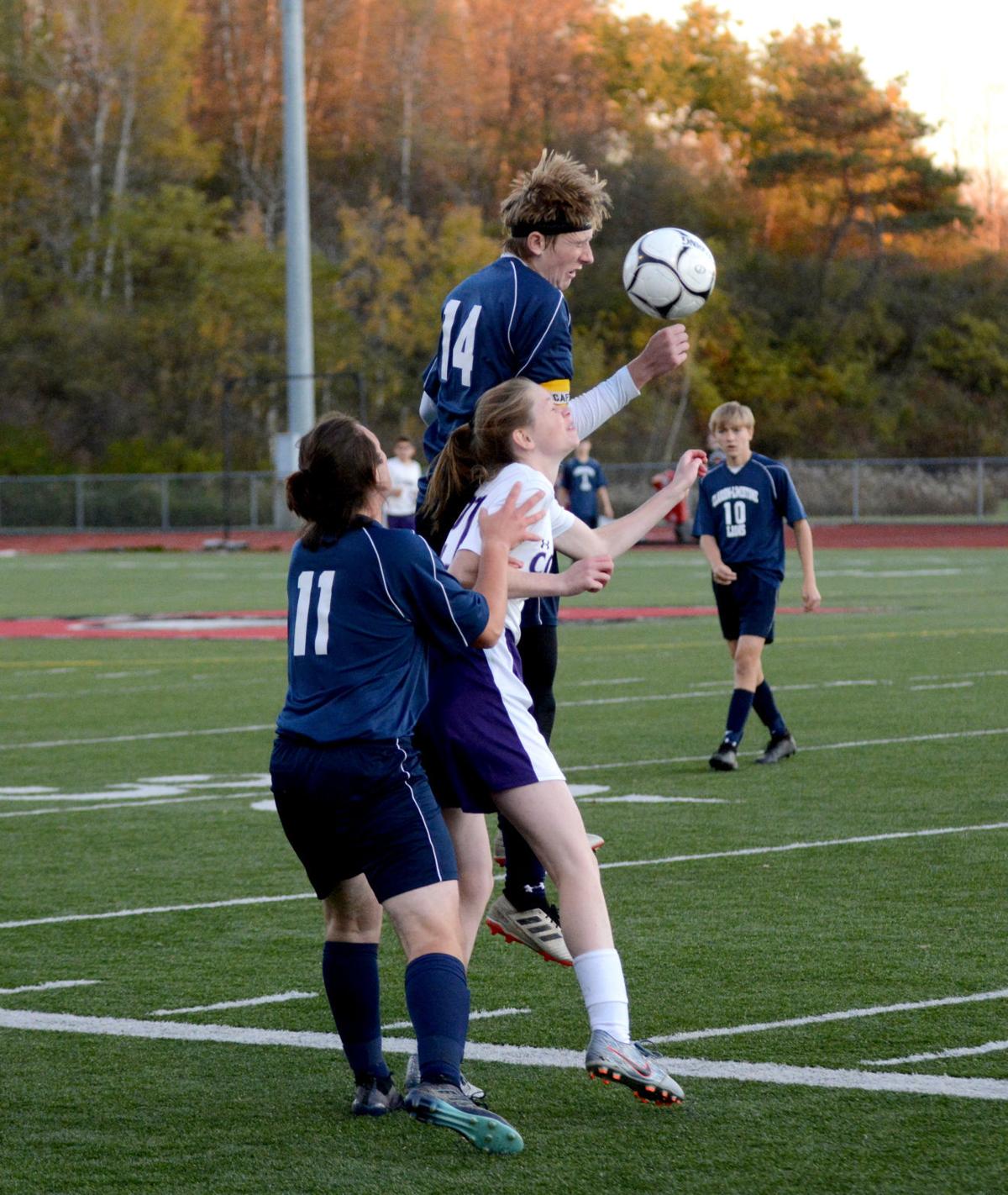 Clarion-Limestone’s Beau Verdill (14) leaps over Coudersport defender Sarah Chambers (11) and teammate Ryker Bingham (11) to head a ball late in the first half Monday in a District 9 Class A semifinal game. Verdill scored a goal in a 4-2 loss to the Falcons. 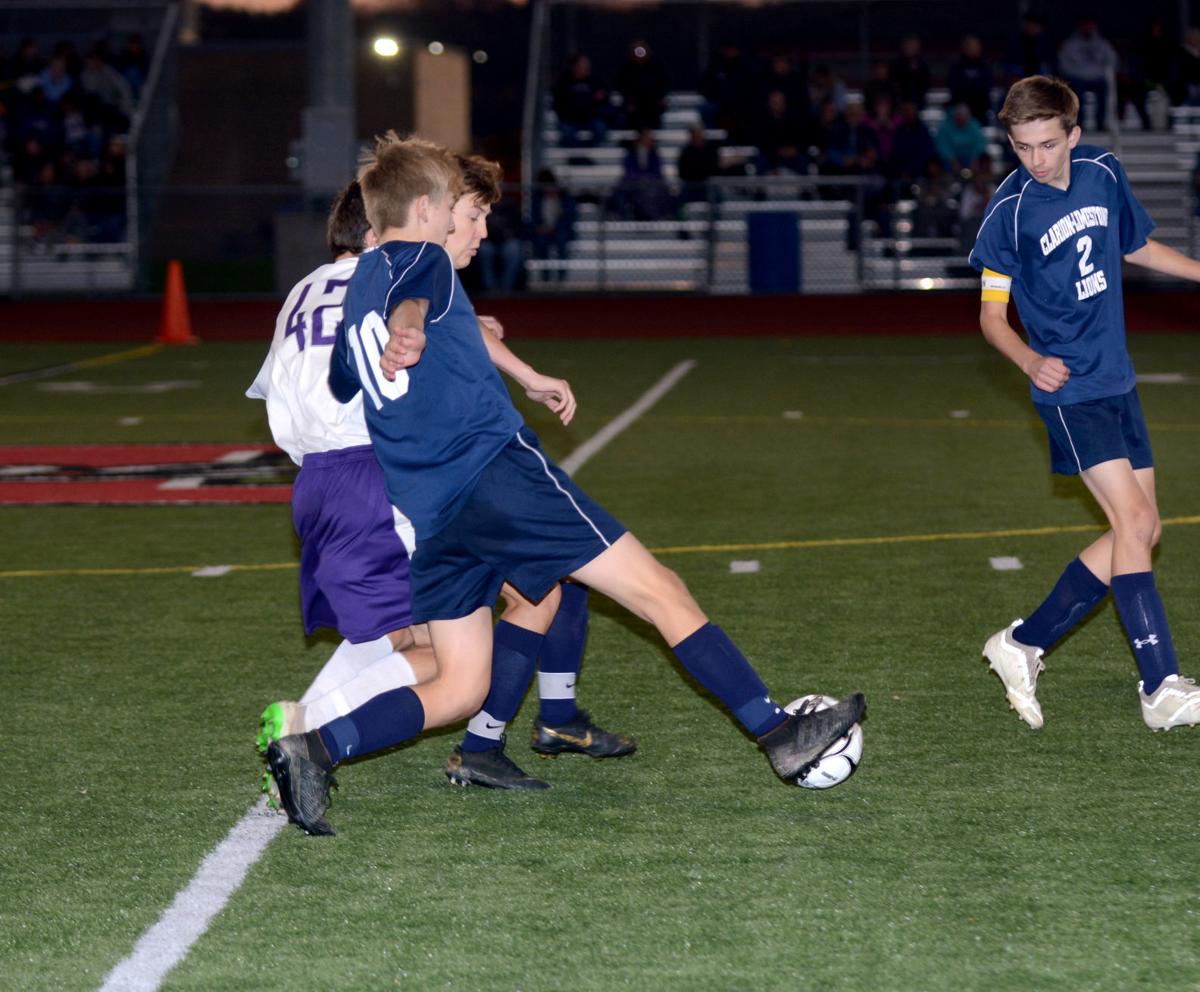 Clarion-Limestone’s Bailee Verdill (10) tries to clear the ball away from away from Coudersport’s Aristotle Smith (42) during second-half action Monday.

Clarion-Limestone’s Beau Verdill (14) leaps over Coudersport defender Sarah Chambers (11) and teammate Ryker Bingham (11) to head a ball late in the first half Monday in a District 9 Class A semifinal game. Verdill scored a goal in a 4-2 loss to the Falcons.

Clarion-Limestone’s Bailee Verdill (10) tries to clear the ball away from away from Coudersport’s Aristotle Smith (42) during second-half action Monday.

DUBOIS — Third-seeded Coudersport built a 3-0 halftime lead before withstanding a Clarion-Limestone comeback attempt in defeating the Lions 4-2 in the semifinal round of the District 9 soccer playoffs on Monday evening at Dubois High School.

Three different players scored in the opening half, Christian Furman, Aristotle Smith, and Jonathan Barroqueiro each scored to give the Falcons a 3-0 first half lead. C-L came back to score a pair of goals from Nate Megnin and Beau Verdill to close to within 3-2. However, Smith notched his second goal of the contest just eight seconds later to push the lead to 4-2.

“They made a play there,” said C-L head coach Don Montgomery. “We rallied to get it to within one and they answered quickly so you have to give them credit there. That’s what you do in the playoffs. They answered and that was a tough one for us to overcome.”

Goal keeper Rosalyn Page made a beautiful diving stop of a shot at the 26:16 mark of the first half to keep the score 2-0.

The game would then be delayed for a half hour as medical personnel attended to a fallen referee.

After the delay Barroqueiro scored at the 37:18 mark for the 3-0 halftime lead.

“We came out flat and I’m not sure if it was the time off or whatever,” said Montgomery. “We didn’t get our footing. But, in the second half our kids played for their playoff lives and I can’t ask for more than that.”

Page made another save from in close at the 13:21 mark of the second half. Each team then rang a shot off the post as the Lions came at the 18:10 mark and the Falcons came at the 23:31 mark with C-L goal keeper Reese Geiger making a save off the rebound.

Cody Whitling then sent a shot that deflected off of Page and Nate Megnin knocked the rebound into the net at the 24:26 mark to cut the lead to 3-1.

Four and a half minutes later Beau Verdill fired in a shot off an assist from Ryker Binghan at the 29:56 mark which cut the lead to 3-2.

Smith than sealed the game with his second goal eight seconds later.

Page made six saves on eight shots while Geiger made seven saves on 11 shots.

“That young lady was incredible for them tonight,” said Montgomery of Page. “I made a point to stop her and tell her that. You hate for someone to have a game like that against you, but you have to tip your hat to a performance like that.”

The loss brings the end of the careers of Paul Leonhardt who was an exchange student and the lone senior on the team in Ben Murtha.

“Paul as an exchange student goes back in January and we’ll really miss him,” said Montgomery. “His knowledge of the game rubbed off on a lot of these other kids. Ben Murtha is an incredible leader. His play in the second half in particular you could tell he didn’t want to lose the game. He’s a great kid to have on the team as he just goes out and does whatever you ask of him. That type of leadership is going to be tough to replace.”

MEETING NOTICE “The May monthly meeting of the Reynoldsville Water