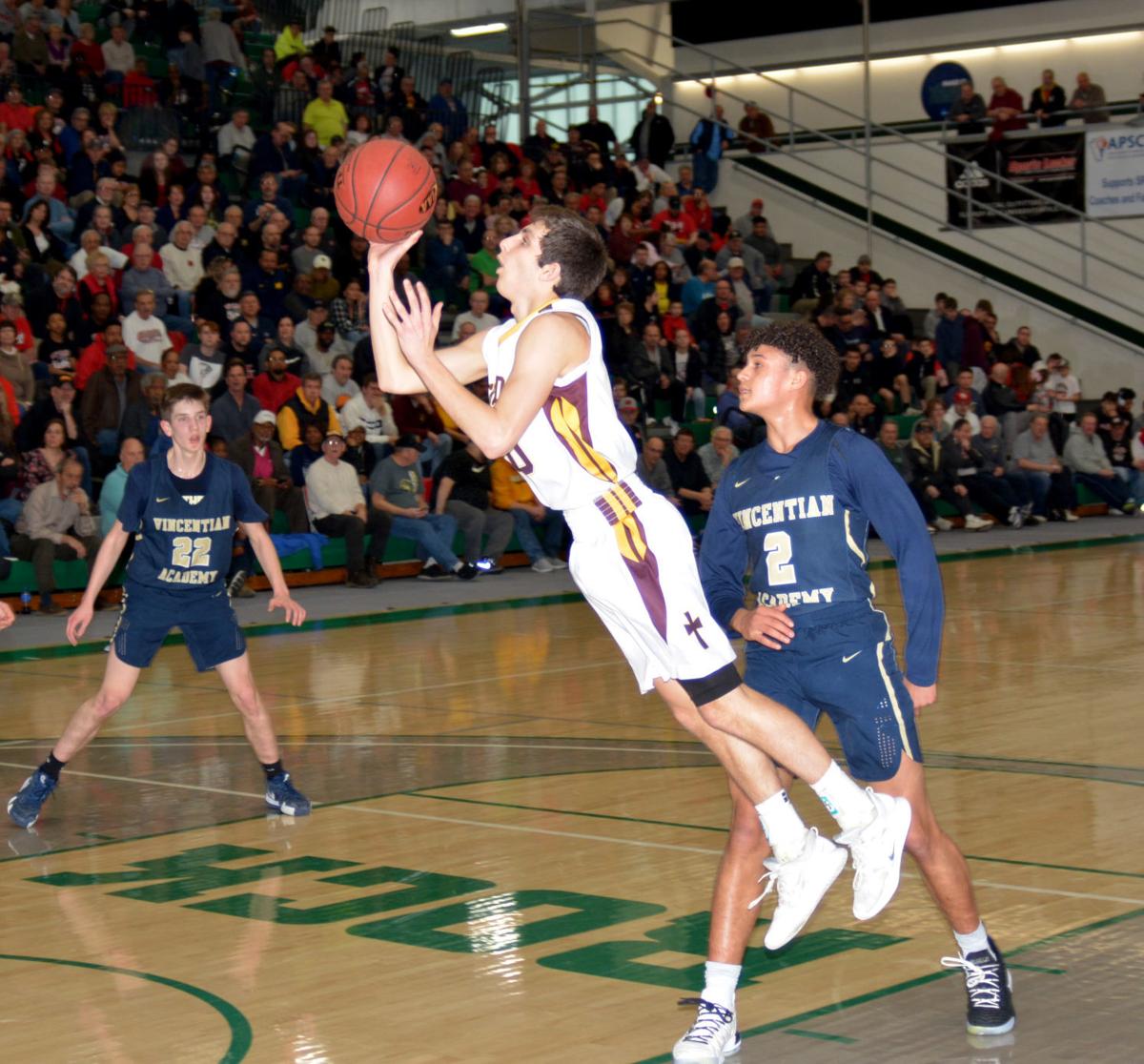 Elk County Catholic’s Carter Lindemuth (10) hits a shot from the edge of the paint in front of Vincentian Academy’s Trey Champine (2) during the fourth quarter Friday. Lindemuth scored a game-high 21 points for the Crusaders in a 63-57 defeat. 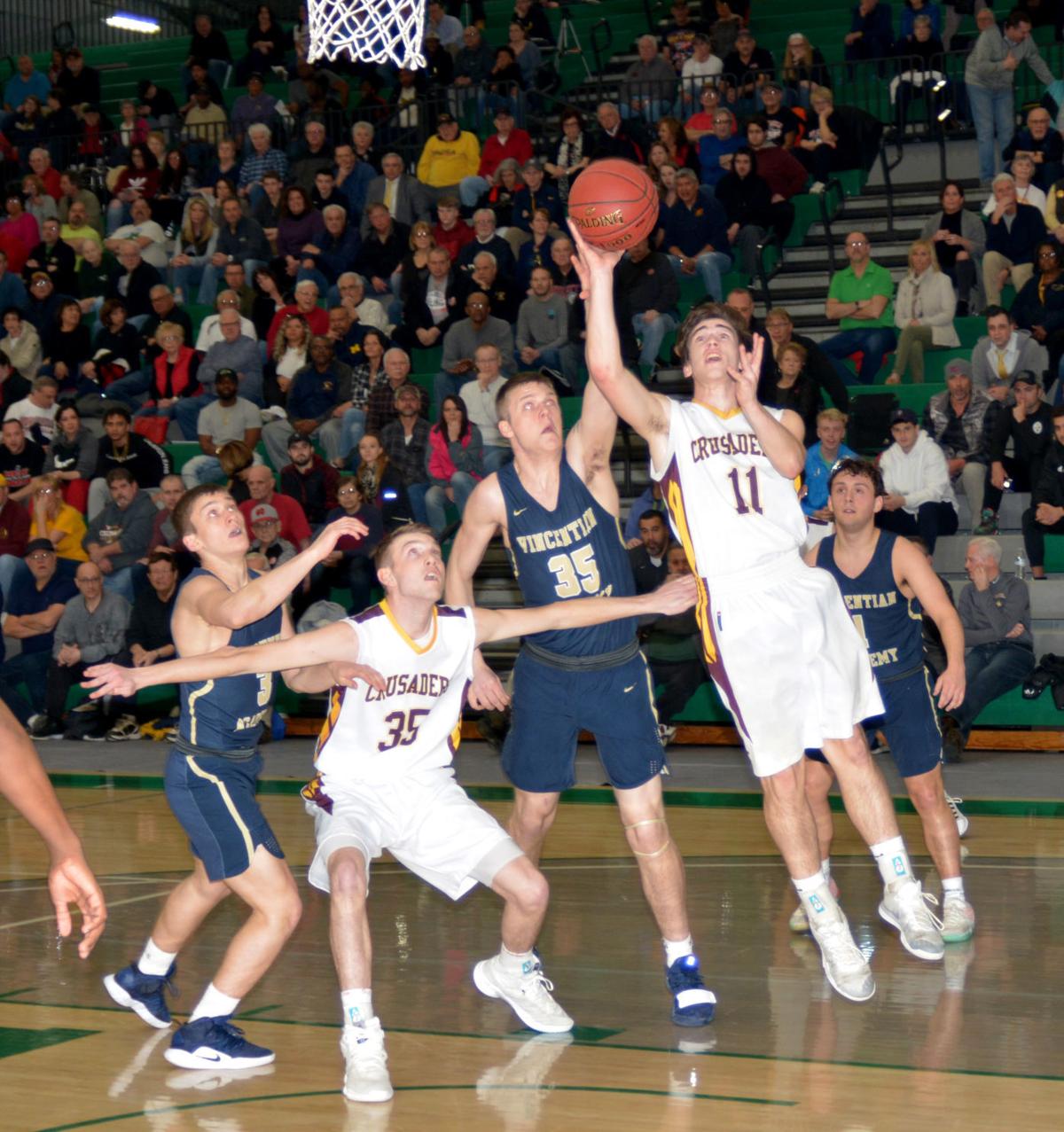 Elk County Catholic’s Alec Wehler (11) scores on the inside while teammate Brady Schnieder (35) shields a pair of Vincentian Academy defenders including Ethan Embleton (35) during the second quarter Tuesday. Wehler finished with nine points in the Crusaders’ 63-57 loss. 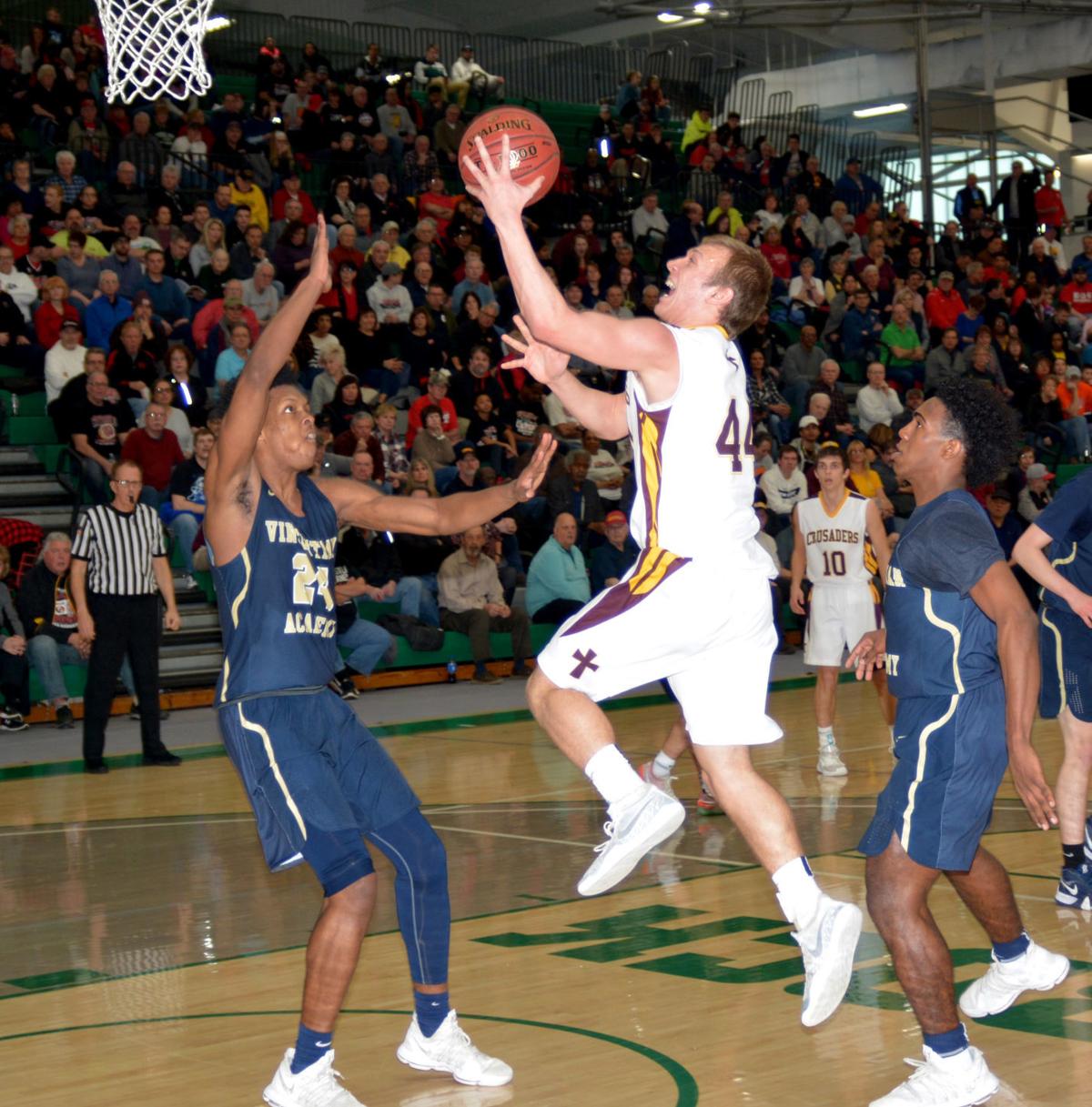 Elk County Catholic’s Alex Breindel (44) goes up for a shot in front of Vincentian Academy’s Angelo Reeves (24) during the fourth quarter Tuesday. Breindel scored eight points on the night as the Crusaders were defeated 63-57.

Elk County Catholic’s Carter Lindemuth (10) hits a shot from the edge of the paint in front of Vincentian Academy’s Trey Champine (2) during the fourth quarter Friday. Lindemuth scored a game-high 21 points for the Crusaders in a 63-57 defeat.

Elk County Catholic’s Alec Wehler (11) scores on the inside while teammate Brady Schnieder (35) shields a pair of Vincentian Academy defenders including Ethan Embleton (35) during the second quarter Tuesday. Wehler finished with nine points in the Crusaders’ 63-57 loss.

Elk County Catholic’s Alex Breindel (44) goes up for a shot in front of Vincentian Academy’s Angelo Reeves (24) during the fourth quarter Tuesday. Breindel scored eight points on the night as the Crusaders were defeated 63-57.

SLIPPERY ROCK — Elk County Catholic was unable to maintain a 10-point three-quarter lead, as it was defeated 63-57 by Vincentian Academy in the second round of the PIAA Class A playoffs at Slippery Rock University Tuesday.

After holding a six-point lead (29-23) at the half, the District 9 champion Crusaders opened the third quarter on a 6-2 run on three-pointers from Carter Lindemuth and Alex Breindel to take their first double-digit lead of the night at 35-25 just 54 seconds into the second half.

After Breindel’s trey ECC (27-2) was held scoreless over the next 4:24 of the game, as the WPIAL runner-up Royals went on a 12-0 run to recapture the lead for the first time since the early portions of the opening quarter.

Matt McDonough sparked the run for Vincentian (18-8) with back-to-back baskets, as the freshman scored 10 points in the third quarter on his way to a team-high 17, all of which came in the second half.

Trey Champine added a three-pointer during the run, while a basket from Alex Griggs off an ECC turnover tied the game at 35 with 3:28 to go in the frame.

After another Crusaders giveaway, McDonough drew a foul and hit both free throws to put Vincentian in front at the 3:09 mark of the third quarter.

“We got a little bit quick with a couple shots and then we had some bad turnovers,” ECC head coach Aaron Straub said. “I thought the kids played hard and played with a lot of heart.”

“I thought we were well prepared and we just needed to get shots in the third and fourth quarter and we lost track of McDonough. You can’t have a freshman score 17 points in the second half against you.”

ECC responded with a quick 4-0 run of its own on a pair of foul shots from Alec Wehler and a basket by Breindel, but the Royals scored the final four points of the third inside the final minute as the teams entered the fourth tied at 41.

Vincentian big man Angelo Reeves picked up his fourth foul with 30 seconds left in the third, as he sat out the remainder of the quarter and the first few minutes of the fourth.

“I’m really proud of the kids, the way how they came out and played for 32 minutes,” Straub said. “When the big kid (Reeves) went out with four fouls, we just didn’t take advantage of that.”

Reeves, who came into the game averaging a team best 17 points per game, was held to just four points, all coming at the free throw line, but was a key factor defensively for the Royals.

Lindemuth sparked the Crusaders in the early portions of the fourth quarter, as he scored the team’s first five points of the frame and hit a three to put ECC up 46-43 with 5:52 remaining in the game.

After Lindemuth’s three, the Royals responded with a 14-5 run to take their biggest lead of the night at 57-51 with 2:18 left to play.

Once again it was McDonough who kick started Vincentian’s run with a three-pointer and then a pair of foul shots to put the Royals up 48-46.

After a three from Breindel put ECC back in the lead, a score on the inside by Ethan Embleton and two free throws from Nate Cullo gave the Royals the lead back for good.

Wehler followed with a bucket to trim the deficit to one (52-51) with 3:04 left in the game, but another score from Embleton followed by a three-point play from Cullo put Vincentian ahead by six with just over two minutes left.

Scores by Lindemuth and Wortman got the Crusaders back within two (57-55) with 1:28 on the clock as they were forced to send Vincentian to the line.

Reeves drew the first foul and hit both ends of a one-and-one with 56.3 seconds left to stretch the Royals lead to four, as Embleton followed with a pair of free throws after ECC was unable to convert on the other end.

Trailing by six inside the final 30 seconds, Lindemuth got to the hoop and converted on an acrobatic shot while drawing a foul.

The junior had a chance to cut the deficit to three at the foul line, but saw his free throw roll of the rim with 26.3 seconds to go.

After Embleton went 1 of 2 at the foul line, Breindel put up a deep three-pointer which was off the mark, as Reeves added a free throw in the closing seconds to bring the final score to 63-57.

After a slow start, ECC used a big run of its own in the first quarter to take the lead, which they held until late in the third quarter.

Vincentian jumped out to an 8-3 lead, as the Crusaders’ lone score in the first two and a half minutes of the game was a three from Wortman.

Then after a three from Wehler, Lindemuth drained a three-pointer to put ECC in front for the first time at 9-8 3:04 into the game.

Wortman and Klawuhn added scores to cap the Crusaders’ big run, as a score by O’Leary sent ECC into the second quarter with an 18-15 lead.

The Crusaders opened the second on a 6-0 run on a score from Wehler and a pair of buckets by Wortman to push their lead to nine, but Vincentian quickly responded with a 6-0 run of its own.

A three-pointer by Lindemuth gave ECC a six-point advantage late in the quarter, as Wortman stepped in to draw a charge on the other end to help the Crusaders maintain a 29-23 lead heading into the half.

The drawn charge was ECC’s fourth of the half, which was key in limiting the Royals’ offense inside the paint.

The Crusaders then pushed their lead out to 10 early in the second half, before Vincentian battled back to retake the lead on its way to the victory to move on to the quarterfinal round.

The game was the final one in a Crusaders uniform for seniors Breindel, Wehler, Brennen Klawuhn, Bryce O’Leary, Brady Schneider and Josh Bauer.

“You could not ask for better kids, better role models or better kids to represent our school and our catholic identity,” Straub said. “I can’t say enough about our seniors.”

“We always tell our team to leave the program in better shape than you found it, and they certainly did that and I am really proud of them.”