DuBois Central Catholic libero Shayleigh Gulvas makes a pass from the back row Thursday night against Curwensville. Gulvas recorded a team-high 13 service points, including five aces, in a five-set victory against the Lady Golden Tide. 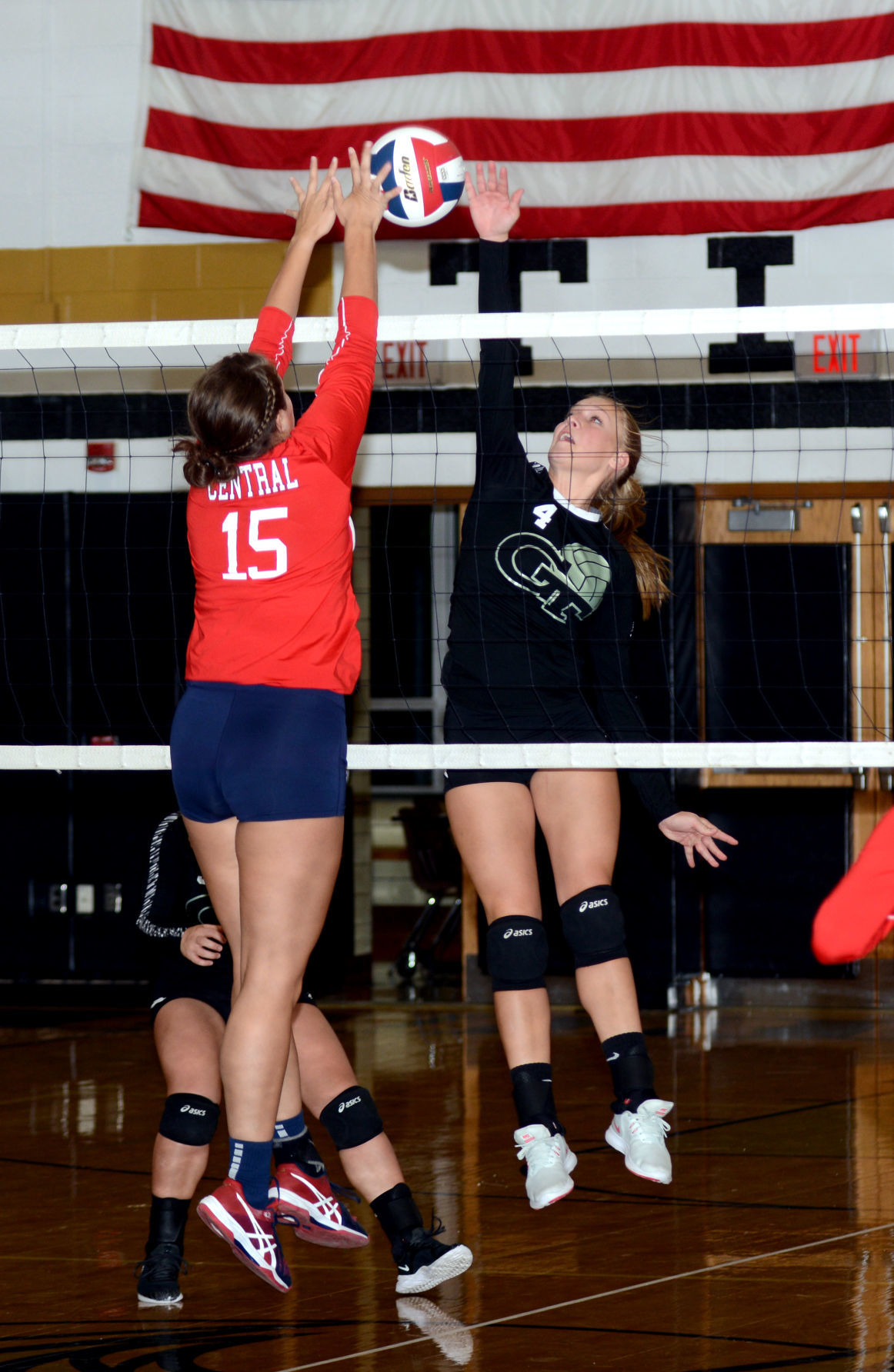 DuBois Central Catholic’s Bella Mangiantini (15) and Curwensville’s Raylee Sunderlin (4) battle at the net Thursday night. Sunderlin posted match-highs in kills (18) and blocks (5) in a five-set loss to the lady Cardinals. Mangiantini had five kills and a pair of blocks. 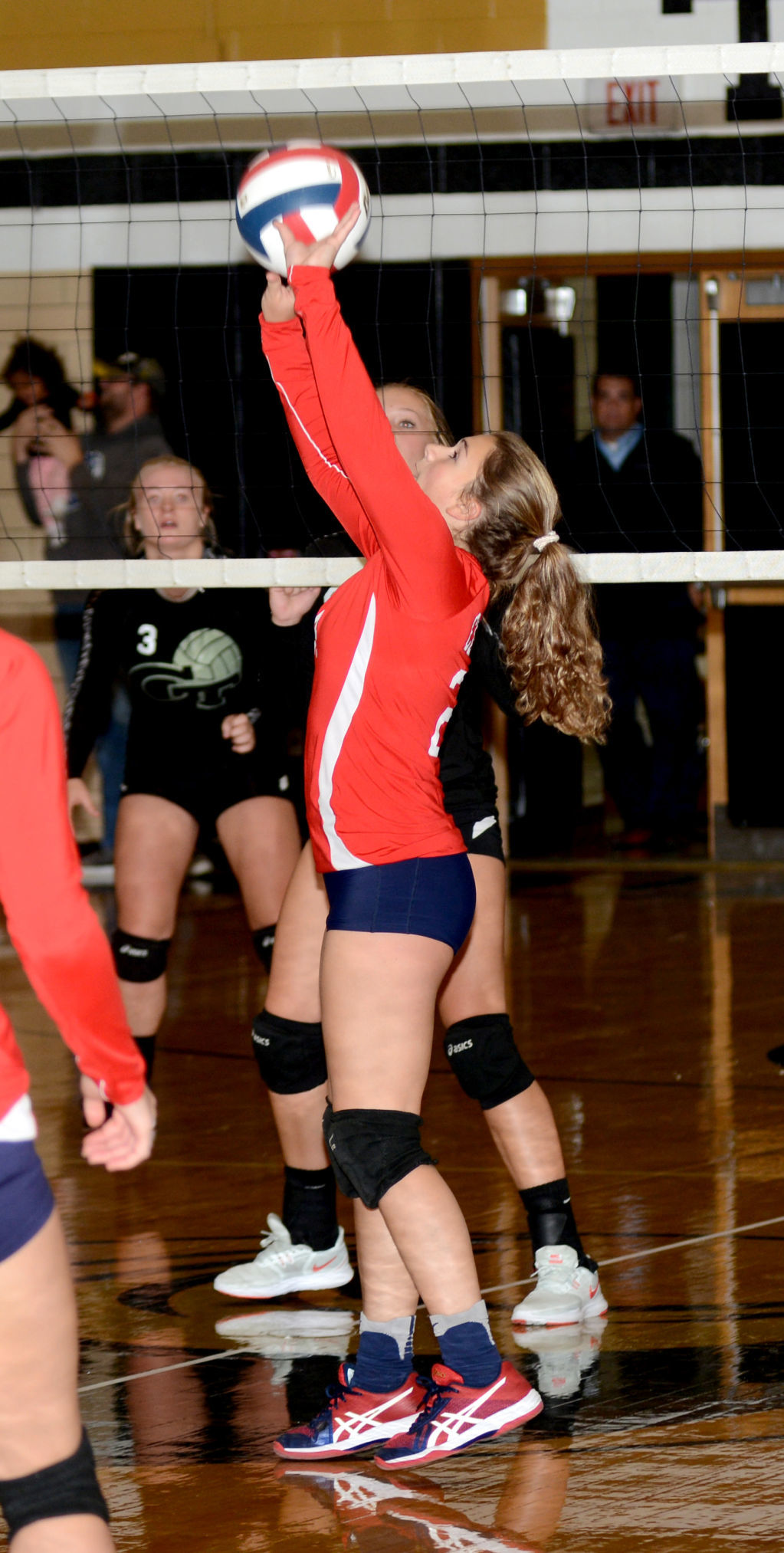 DuBois Central Catholic’s Maia Cogley sets up a teammate Thursday night against Curwensville. Along with running the DCC offense, Cogley recorded 12 service points and dropped in a pair of aces in a five-set victory.

DuBois Central Catholic libero Shayleigh Gulvas makes a pass from the back row Thursday night against Curwensville. Gulvas recorded a team-high 13 service points, including five aces, in a five-set victory against the Lady Golden Tide.

DuBois Central Catholic’s Bella Mangiantini (15) and Curwensville’s Raylee Sunderlin (4) battle at the net Thursday night. Sunderlin posted match-highs in kills (18) and blocks (5) in a five-set loss to the lady Cardinals. Mangiantini had five kills and a pair of blocks.

DuBois Central Catholic’s Maia Cogley sets up a teammate Thursday night against Curwensville. Along with running the DCC offense, Cogley recorded 12 service points and dropped in a pair of aces in a five-set victory.

CURWENSVILLE — The Curwensville volleyball team had DuBois Central Catholic on the ropes Thursday night, but the visiting Lady Cardinals regrouped to outlast the Lady Tide in a thrilling five-set victory at Patton Hall.

The teams traded sets the entire night, with DCC winning the first and third sets, 25-23 and 29-27, respectively, while Curwensville took the second set 25-21. The Lady Cardinals rallied from an early deficit in the third set before winning in a game that went beyond the regular 25-point threshold.

It appeared that win had given DCC the momentum, but that wasn’t the case as the Lady Tide rolled to a 25-9 victory in set No. 4 to even the match.

The fifth-and-deciding set was as tight as the overall match.

The teams then exchanged a series of sideouts before two points by Taylor Luzier on a pair of kills by Raylee Sunderlin put the Lady Tide up 11-9. The Lady Cardinals countered with a sideout and a three-point spurt by Avery Sickeri to up 13-11. Sickeri had 11 points on the night.

Curwensville pulled even at 13-13 on a sideout and point by Caldwell on a kill by Erica Buck. The Lady Tide then fought off a pair of DCC match points at 14-13 and 15-14 with sideouts.

However, a missed serve by Curwensville, coupled with a point by Lady Cardinal Jordy Kosko gave DCC a slim 17-15 win in the fifth set and the overall victory, 3-2.

Curwensville’s strong night at the net had them on the cusp of a victory, but the Lady Tide made a few more errors than DCC, and that ultimately cost them the match.

“It was an exciting match, and they (Curwensville) played really well,” said DCC coach Ted Fitzer. “We didn’t seem to have a lot of energy for most of the night. Jordy (Kosko) got going in that final game and starting swinging. But, it seemed like we were just pushing the ball over too much,

“I originally said if the soft middle is there go for it. And, they did and it worked a little bit in the first game, but they were playing it too much and maybe being a little too safe. I don’t know if they were afraid to make a mistake or what.

“They came through. We came back in the one game, and I give them a lot of credit for bouncing back from that 25-9 fourth set to win the fifth. That’s very commendable, and I’m really proud of them for that.”

Central Catholic jumped out to a quick 7-2 lead in the opening set as Gulvas scored theee points (2 aces) and Sickeri two, with one ace. Curwensville countered with a sideout and three points from Sunderlin, but a four-point run by Kosko later put the Lady Cards up 16-9.

Curwensville responded with a sideout and a six-point service run split evenly between Alyssa Bakaysa and Luzier to pull even at 16-16. Five more points, including three straight aces, by Caldwell on the next service rotation gave the Lady Tide a 22-17 advantage. Caldwell posted a match-high 18 service points.

Curwensville couldn’t finish off the set though, as DCC stormed back for a 25-23 victory. Gulvas got the rally started with a pair of points, while Sickeri served up the final four points of the set.

The second set was nip-and-tuck early on before a four-point spurt by Luzier gave the Lady Tide a 13-8 lead. Central Catholic never fully recovered from that mini-run, getting as close as 21-19 before Curwensville eventually won the set (25-21) on a sideout on a kill by Sunderlin.

Curwensville carried that momentum into the third set and jumped out to a 5-0 lead on a sideout and four points by Caldwell. Two more points from Sunderlin pushed that advantage to six (9-3) before Lady Cardinal Maia Cogley rattled off five straight points.

Cogley had two aces and Kosko a kill during that spurt that evened things at 9-9. Cogley finished the night with 12 points.

It was a tight battle from there, with a pair of Caldwell points giving Curwensville a 17-14 edge before a five-point service stint by Gulvas put DCC back on top 20-17.

The Lady Tide rallied back and got to set point late in the game (24-23) on a pair of points by Alexandra Zattoni. Central Catholic fought off that set point with a sideout, then got two points by Hannah Holdren to go up 25-24.

Curwensville proceeded to fight off three set points before DCC won the third 29-27 on a point by Gulvas.

The Lady Tide responded to the tight loss though and raced out to an 8-1 lead in the fourth thanks in large part to a six-point run by Jacobson that featured kills by Sunderlin and Buck. Jacobson recorded eight of her 14 service points in the fourth.

Three more points by Erica Linsenbigler made it 12-2 lady Tide, who never looked back on their way to a lopsided 25-9 victory that set the stage for the winner-take-all fifth set that DCC pulled out in the end.

Central Catholic closes out its regular season Tuesday at home against Brookville.