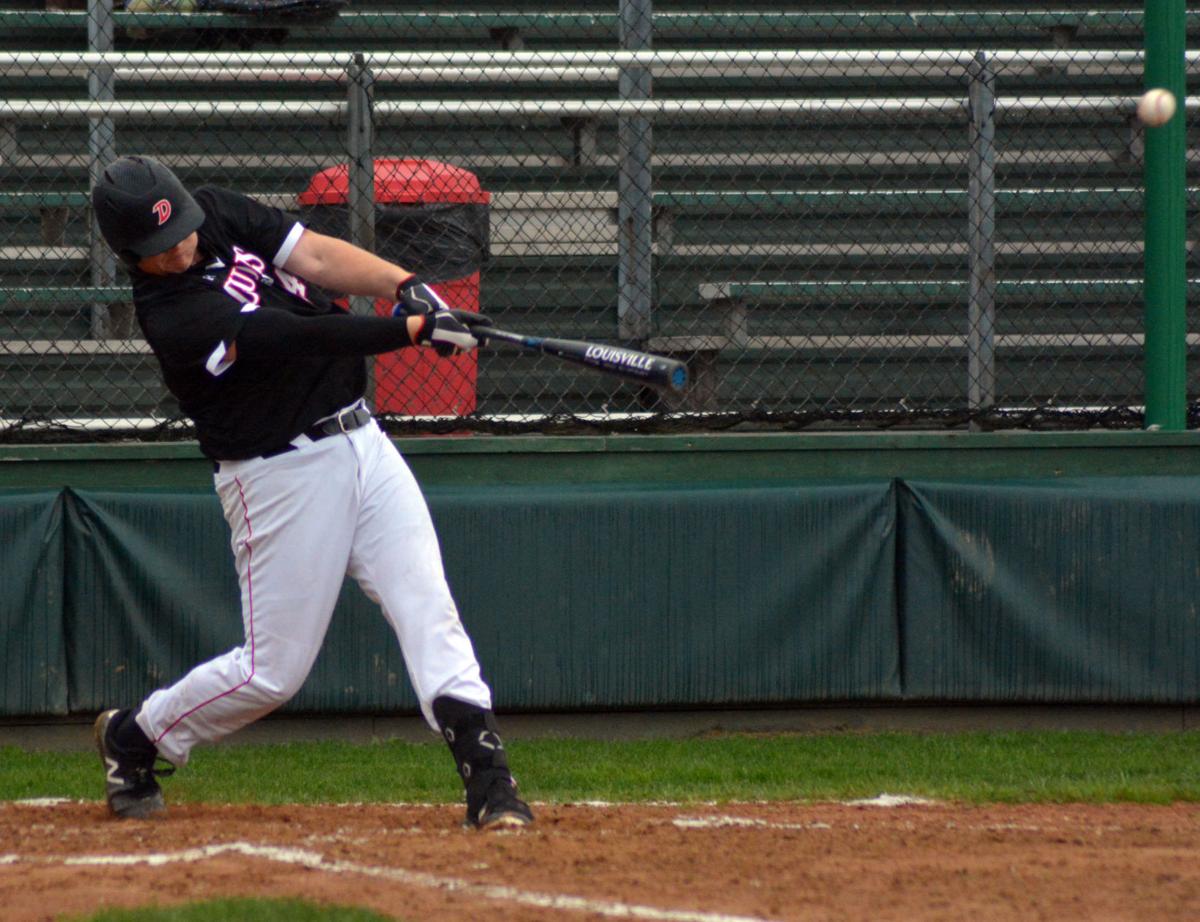 Alex Pasternak hits an RBI single in the first inning during Monday’s varsity baseball game against the St. Marys Flying Dutchmen at Berwind Park. Pasternak was 3-for-4 on the day with four RBIs as DuBois won 21-0 in three innings. 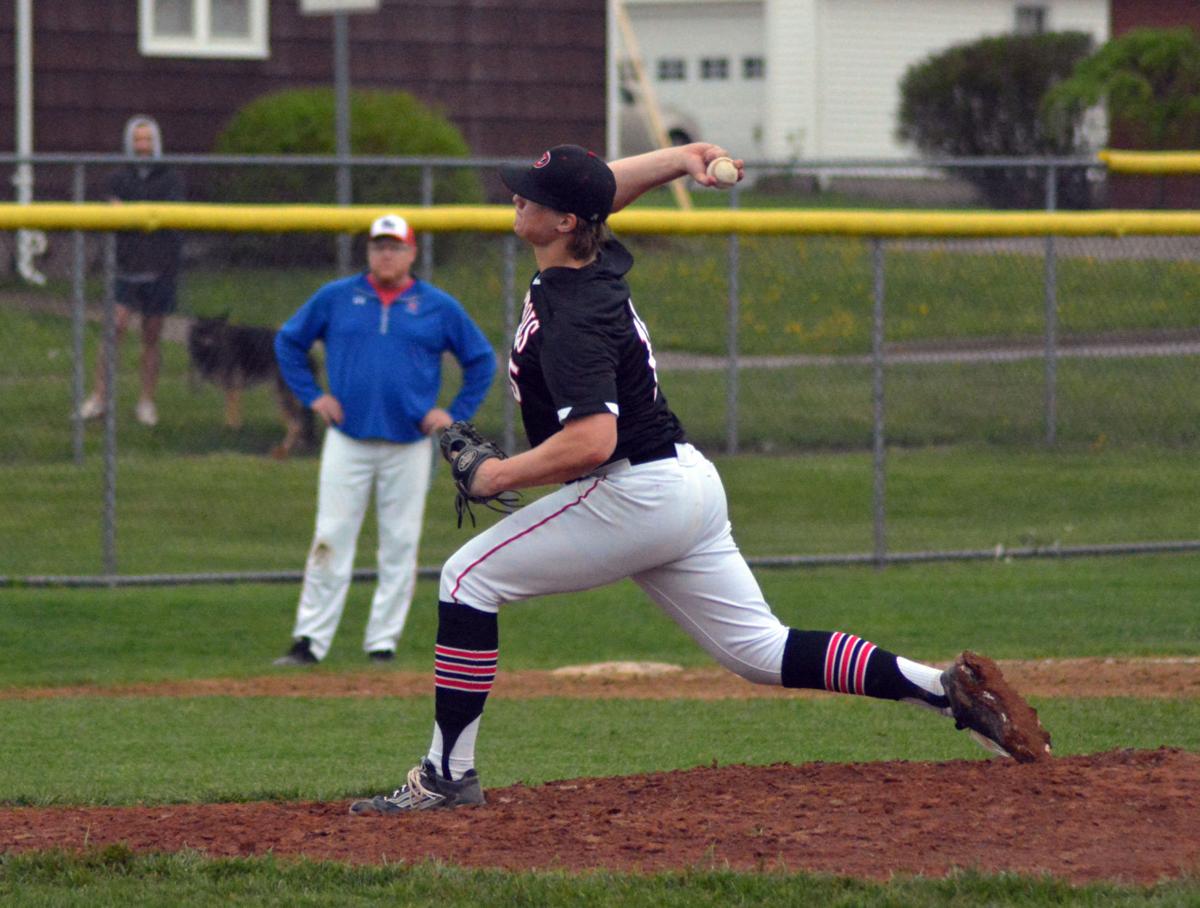 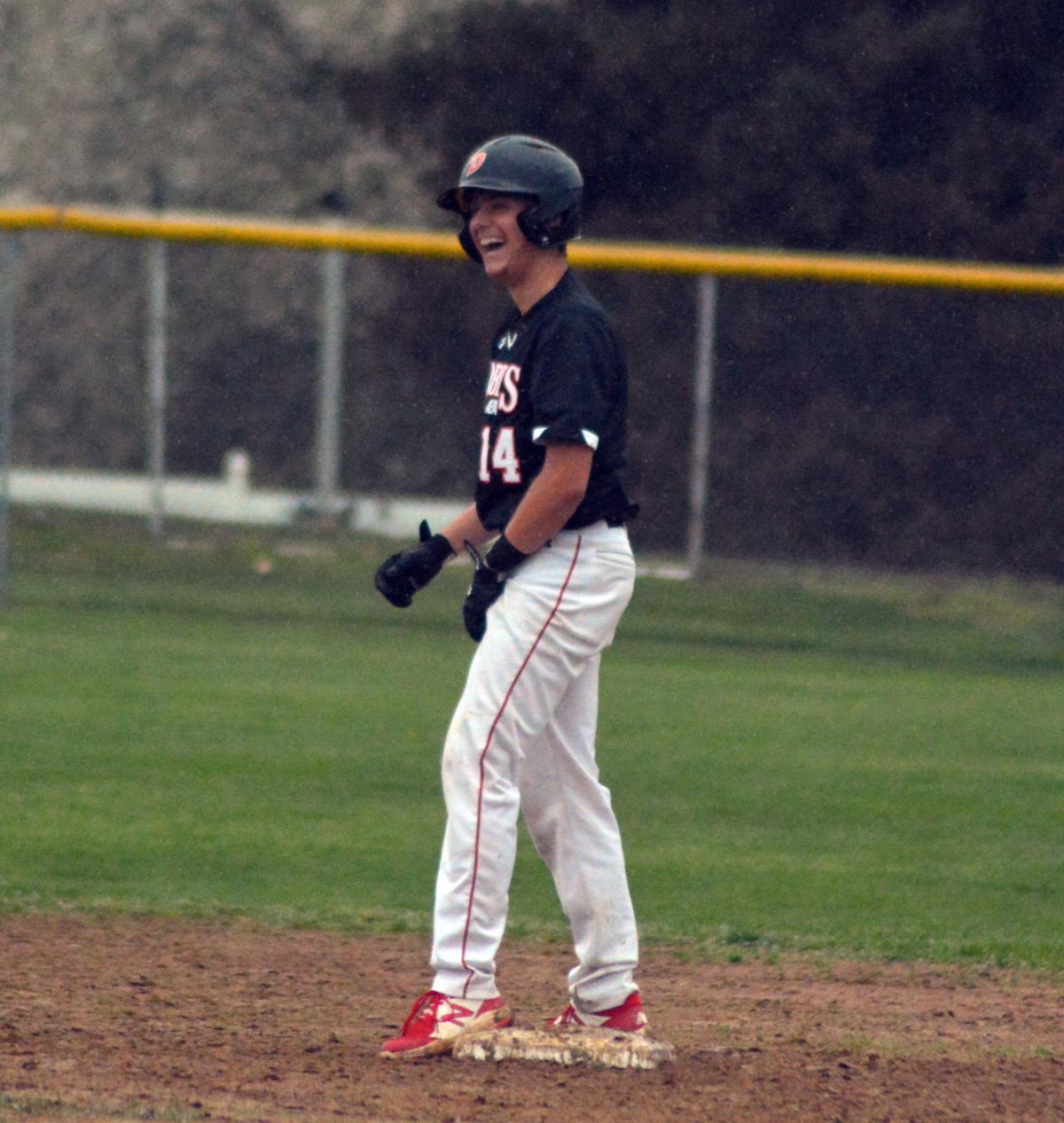 Nate Tyler smiles to his cheering DuBois Beavers teammates back in the dugout after Tyler hit a bases-clearing double during the second inning of Monday’s varsity baseball game against St. Marys. DuBois would go on to win 21-0 in three innings.

Alex Pasternak hits an RBI single in the first inning during Monday’s varsity baseball game against the St. Marys Flying Dutchmen at Berwind Park. Pasternak was 3-for-4 on the day with four RBIs as DuBois won 21-0 in three innings.

Nate Tyler smiles to his cheering DuBois Beavers teammates back in the dugout after Tyler hit a bases-clearing double during the second inning of Monday’s varsity baseball game against St. Marys. DuBois would go on to win 21-0 in three innings.

ST. MARYS — The DuBois Beavers and St. Marys Flying Dutchmen took to Berwind Park Monday afternoon amid dreary skies and raindrops. One team thrived in the conditions while the other faltered — as DuBois took advantage of 16 St. Marys walks en route to a 21-0 win in three innings.

“Anything can happen on a day like this,” DuBois head coach Todd Stiner said. “They had trouble throwing strikes and slipping on the mound. We were fortunate (DuBois pitcher) Brycen (Dinkfelt) wasn’t having an issue. He took his bullpen drill serious, came out and threw strikes and let our defense play. And they did a nice job.”

“We just couldn’t find the strike zone,” St. Marys head coach AJ Meeker said. “Then the attitude, they were just deflated. They just couldn’t pick themselves up and it just snowballed from there.”

Six of the first seven Beaver batters reached via walks to start the game — with nine total walks in the first inning alone among three pitchers. That allowed DuBois to jump out to an 8-0 lead. The only two hits DuBois needed in the first inning to score the eight runs both came by RBI singles from Alex Pasternak — who was 3-for-4 on the day with four RBIs.

After St. Marys couldn’t answer in the bottom of the first, DuBois added 10 more runs in the top of the second. This time instead of relying on the walks, the DuBois offense picked things up, with a three RBI double from Nate Tyler and two RBI singles from Pasternak and Garrett Starr.

“Getting a big hit here and there with the bases loaded is important. Even though you’re walking guys, you’re getting one run (at a time). Then you get a single and pick up two, get a double and pick up three. And it was nice for us to get guys in the game and see people in to bat and get some game experience.”

DuBois added three more runs in the top of the third inning that included two RBIs from Nate Farrell. Dinkfelt struck out two of the three St. Marys batters in the bottom of the third to end the game at 21-0 via the mercy rule.

Pasternak, Tyler and Farrell had four RBIs, while on the mound, Dinkfelt allowed one hit on the day — a leadoff single by Christian Coudriet.

“We’ve got a big week,” Stiner said. “Saving Brycen and only throwing three innings is big for us in a four-game week.”

DuBois got back to .500 on the season with the win, moving to 6-6 overall. They will travel to Punxsutawney today as Stiner hopes the win gives them momentum for today and for the rest of the year.

“We just have to enjoy this one but at the same time put it behind us and focus on Punxsy (today),” Stiner said. “It’s always hard to win in Punxsutawney. We’ve struggled up there. So we need to be aggressive, go up and play a good, sound game and eliminate mental mistakes — which we did today. We played smart baseball today but in an abbreviated game. We have a couple guys that are out right now so we need to fill their shoes and try to play hard.”

St. Marys falls to 4-6 on the year and travels to Hollidaysburg today.

“I told them out there that the season’s halfway done,” Meeker said. “We’ve got three more games this week. We’ve got (today) at Hollidaysburg. Then we have the Elk County tournament Wednesday and Thursday. We’ve got some choices. I said to them, ‘Either you shake this off and ignore it and it’s all done with or you let this affect you for the rest of the week and we end up 4-9 at the end of the week. It’s up to you guys — whatever you guys want to do.’ It’s up to them, but hopefully we can find the strike zone (today).”