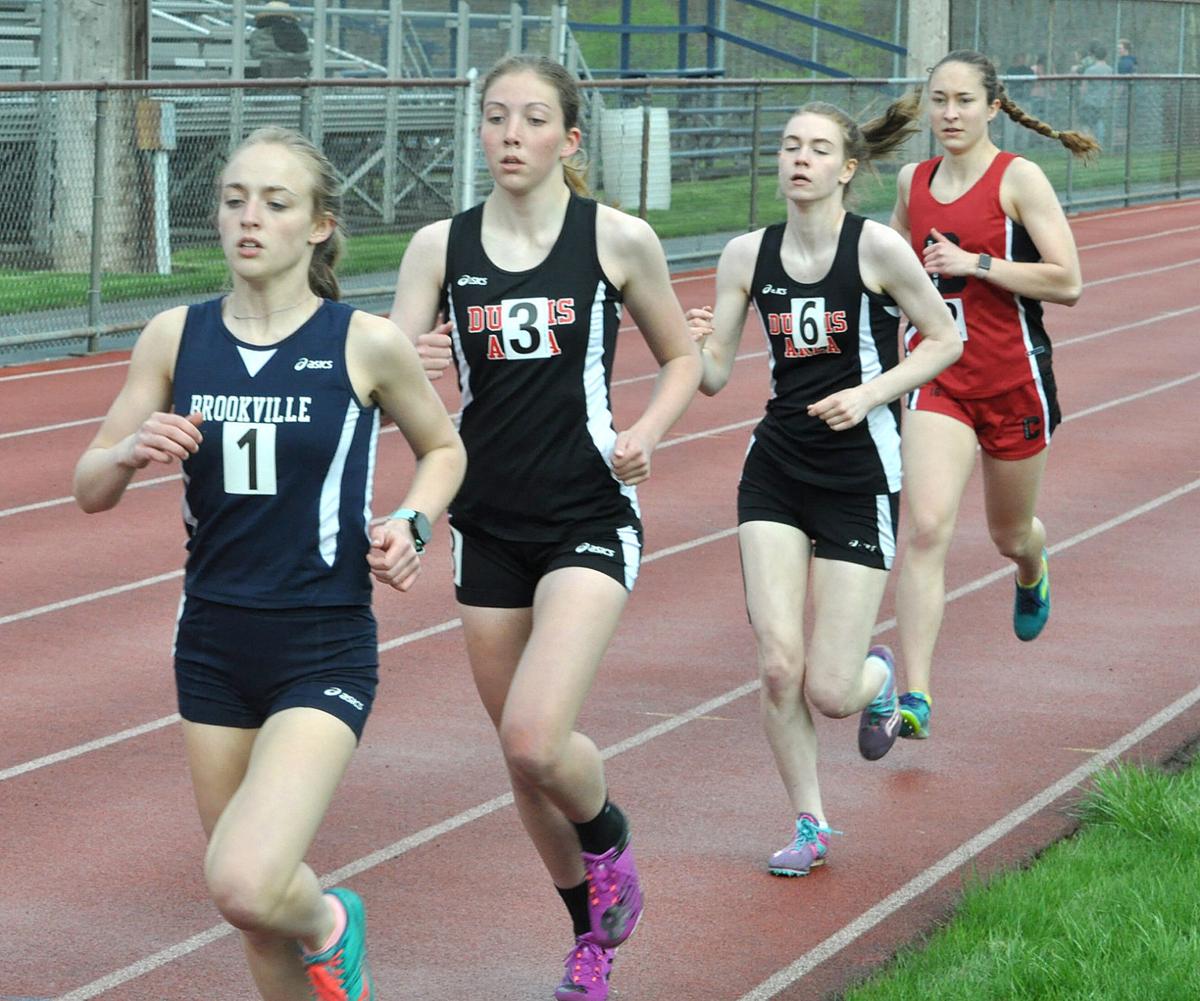 Brookville’s Emma Fiscus leads the field in the 1,600-meter run at Tuesday’s tri-meet with DuBois and Clearfield. Behind her, however, is eventual winner Abby Dressler of DuBois. Fiscus dropped to third place behind Dressler and Clearfield’s Abby LaBorde (back). DuBois’ Emalee Horner (6) was fourth 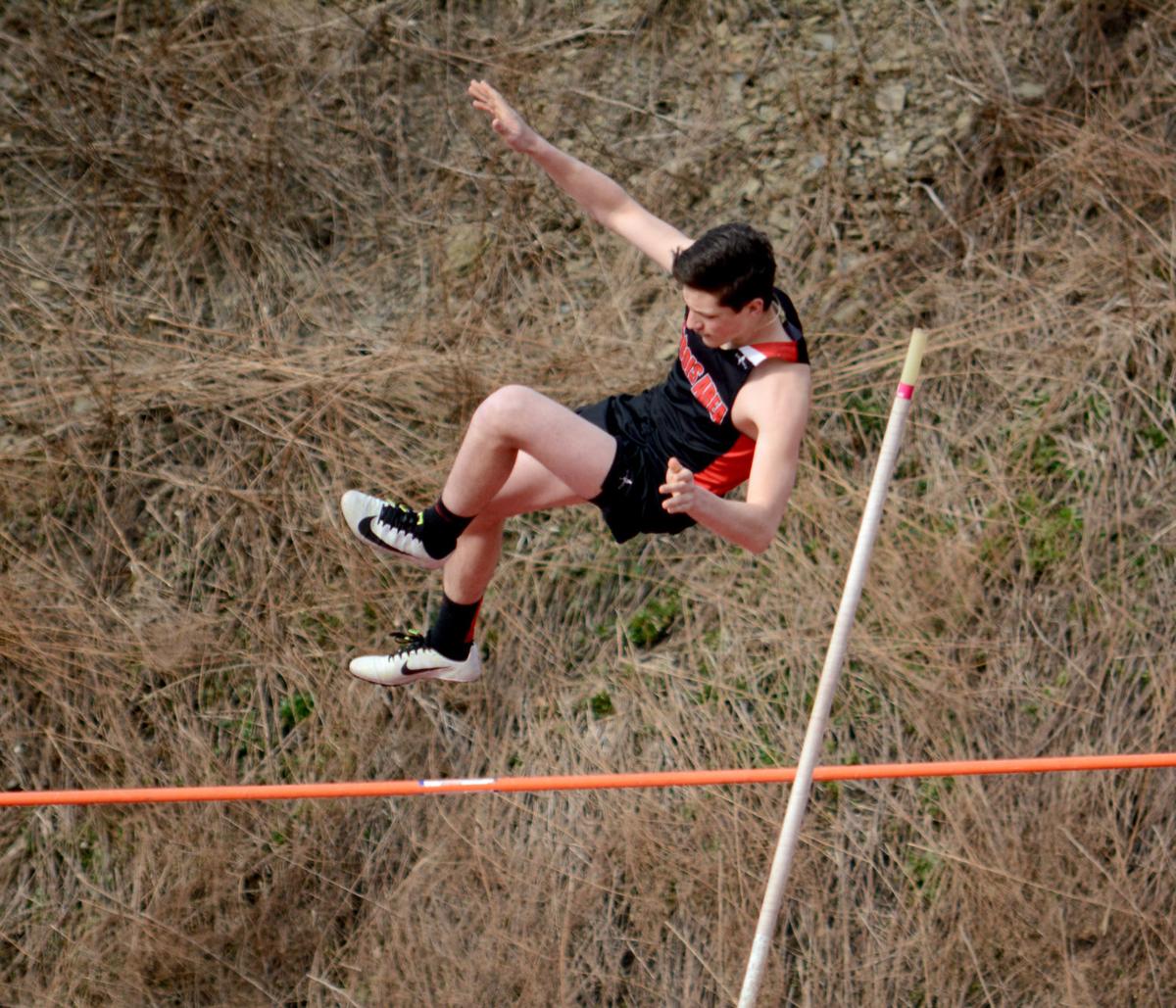 DuBois’ Zach Shilala, shown easily clearing an early height in the pole vault earlier this season, tied for first in the event Tuesday at a tri-meet in Brookville that also featured Clearfield. Shilala and Raider Griffen Wolfe each cleared 11-6.

Brookville’s Emma Fiscus leads the field in the 1,600-meter run at Tuesday’s tri-meet with DuBois and Clearfield. Behind her, however, is eventual winner Abby Dressler of DuBois. Fiscus dropped to third place behind Dressler and Clearfield’s Abby LaBorde (back). DuBois’ Emalee Horner (6) was fourth

DuBois’ Zach Shilala, shown easily clearing an early height in the pole vault earlier this season, tied for first in the event Tuesday at a tri-meet in Brookville that also featured Clearfield. Shilala and Raider Griffen Wolfe each cleared 11-6.

BROOKVILLE — With a heavy rain delaying things about an hour, the Brookville Area High School track and field teams won three out of four decisions in their three-team Senior Night tri-meet with DuBois and Clearfield.

That lone loss came at the hands of the DuBois Lady Beavers, who beat the Lady Raiders, 81-69. The DuBois girls scored a more lopsided 101-49 victory against Clearfield to improve to 6-2 on the season. The Brookville girls are now 7-1.

The Brookville girls won eight of the 18 events Tuesday, but DuBois used its overall depth to not only hand the Lady Raiders their first loss but also sweep the meet. DuBois and Clearfield each ended the day with five wins.

Senior Jerica Fischer and freshman Abby Dressler were each double winners for the Lady Beavers.

Gabby Snyder-Petitti added a victory in the discus (84-6) and second in the shot put for the Lady Beavers.

The Lady Raiders were led by Morgan and Madison Johnson, and Morgan Monnoyer, who were all double-winners.

Brooke Quairiere won the 100 hurdles (16.66) while finishing third in the 300 hurdles and second in the triple jump, both of them hitting qualifying standards.

Also for the Lady Raiders, Madison McAninch was runner-up in the 300 hurdles while Martz was third in the 400 dash as well Emma Fiscus in the 1,600 run.

“It just wouldn’t be a 2019 track and field meet without some rain,” said Lady Beavers coach Scott Dullivan. “Brookville was a very tough undefeated team and a well-coached team that we were very fortunate to beat today.

“We had the meet scored 75-75 on paper before hand, and it would have ended up 76-74 if Brookville ran their “A team” in the 1600 meter relay. I can’t say enough about how our girls responded today, though.

“The first obstacle was overcoming a 30 minute rain delay after being soaking wet and sitting on a school bus. We switched several girls to different events in an attempt to maximize our points. It was an absolute total team victory from top to bottom today.”

In the boys’ meet, the Raiders took overall firsts in nine of the 18 events.

Bryan Dworek was a triple-winner, leading a 1-5 Raiders finish in the 100-meter dash (11.4), winning the long jump (22 feet, 4 1/2 inches) just two inches shy of his record mark set last week at St. Marys and running a leg on the winning 4x100 relay with Ian Thrush, Cabe Park and Jack Krug. They crossed the line with another blistering time of 42.57 seconds.

Olson led a 1-2-3 overall sweep in the 110 hurdles, winning in 15.23 with Addison Singleton and Cameron Hooven also running district-qualifying times. Hooven and Singleton were 2-3 behind Dworek in the long jump with qualifying distances as well.

Hooven won the high jump, clearing 6 feet with teammate J.P. Young the only other jumper in the event, clearing 5 feet, 2 inches. Hooven and Singleton were 2-3 in the triple jump with Hooven reaching a qualifying distance.

Kyle MacBeth and Braden MacBeth were 1-2 in the javelin, with Kyle winning with a district-qualifying toss of 156 feet, 8 inches. Brad Byerly was fifth in the discus.

The Raiders’ 4x800 relay qualified for districts for the first time as the foursome of Cam Moore, Calvin Doolittle, Hayden Kramer and Bryce Baughman was second overall in 9:06.9. Baughman was third in the 3,200 run and fifth in the 1,600. Kramer was fourth in the 800.

As for the DuBois boys, they were led by Andrew Boyle, who played a part in two of the Beavers’ three victories on the day.

“Brookville has a really nice team this year, and Clearfield was tough too,” said DuBois coach Brian Clinger. “Andrew Boyle had a great day for us along with the other kids on the 3,200 relay. Zach Shilala also did a nice job in the pole vault for us.

“We’re just trying to get better each day as we move closer to districts.”

DuBois heads to the Altoona Invite Friday at Mansion Park, while Brookville will compete at the Oil City Invitational on Saturday.