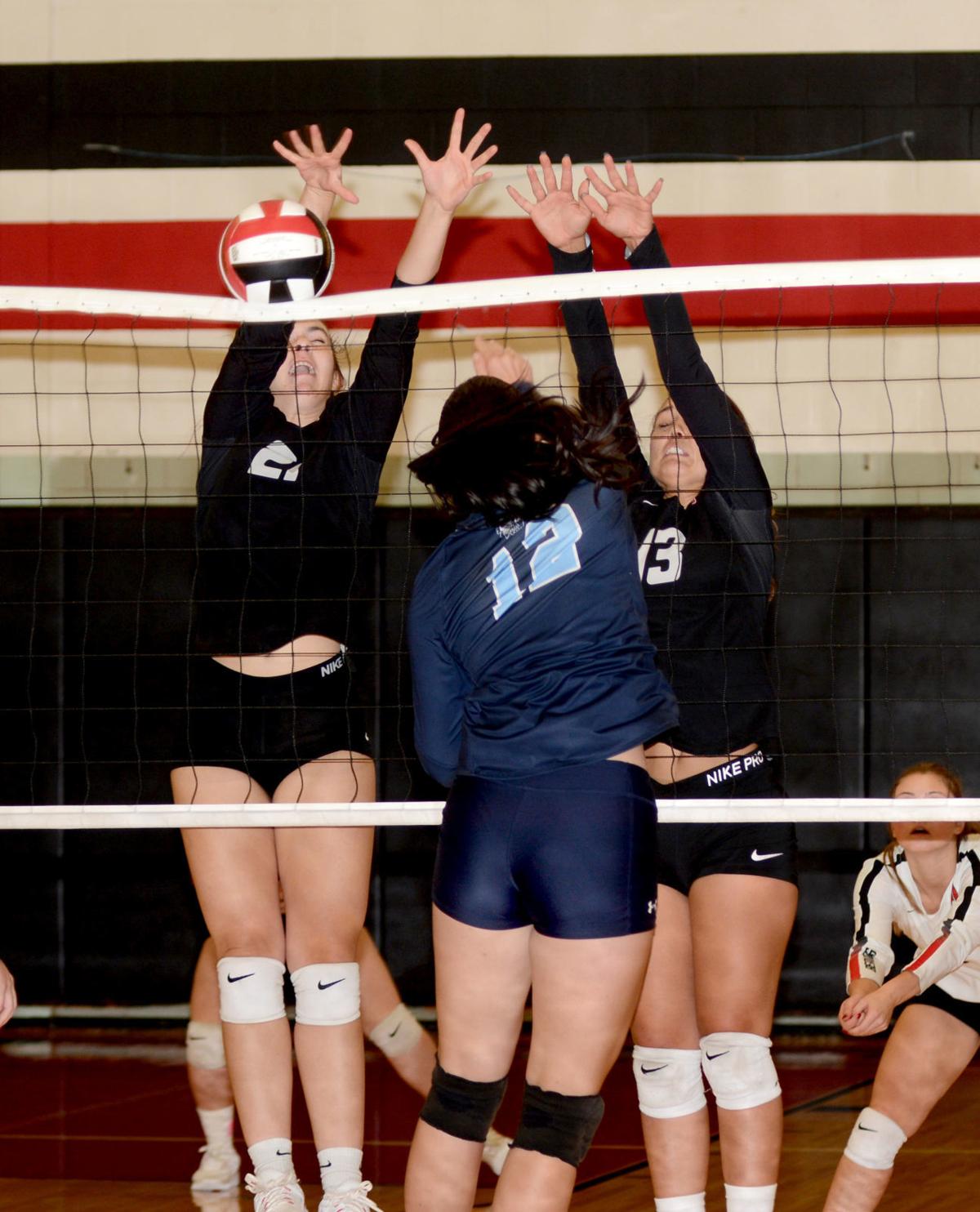 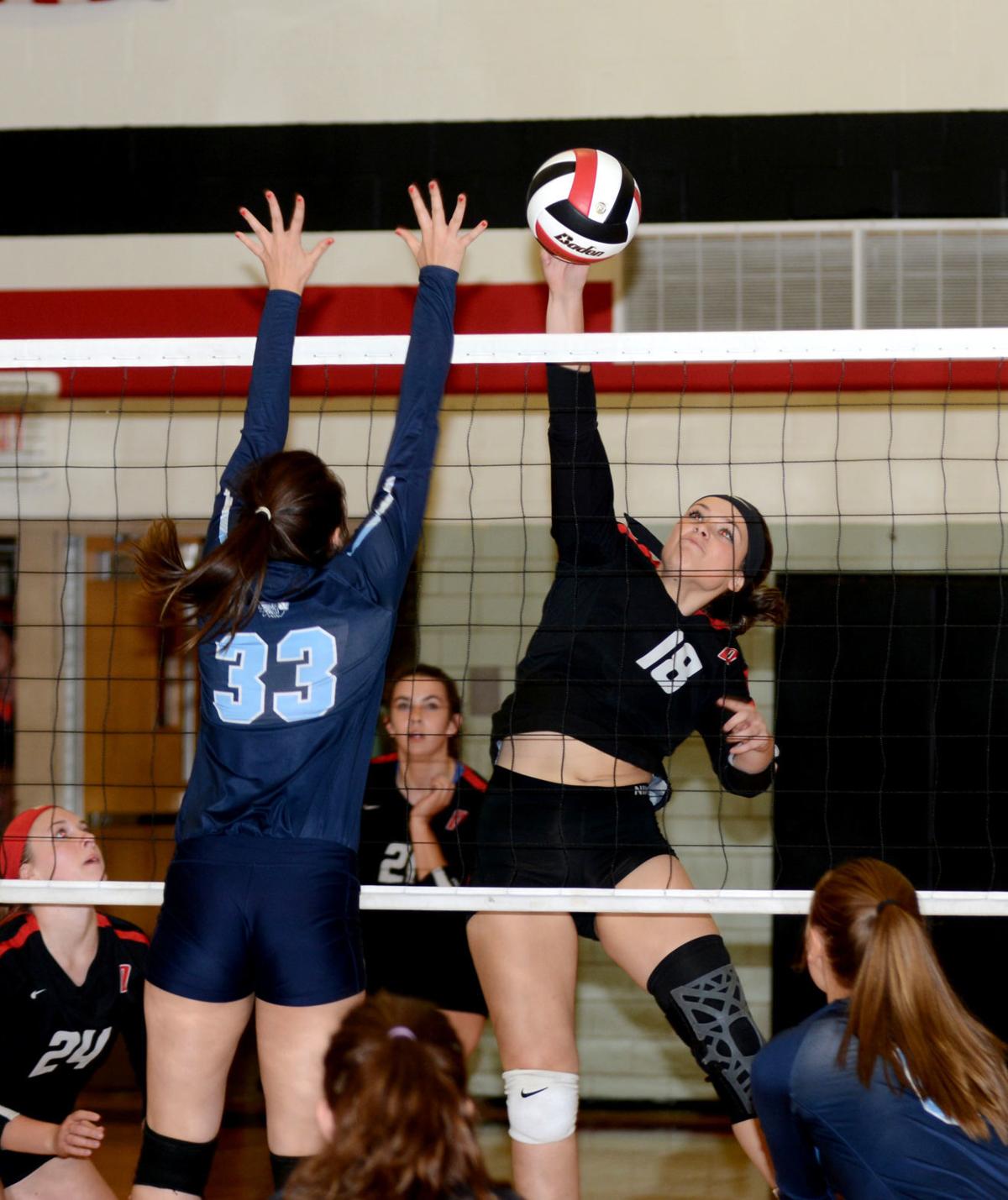 DuBois’ Taylor Smith (18) hits a spike past the block attempt of Brookville’s Maggie Mackins (33) Tuesday night. Smith had eight kills on the night. 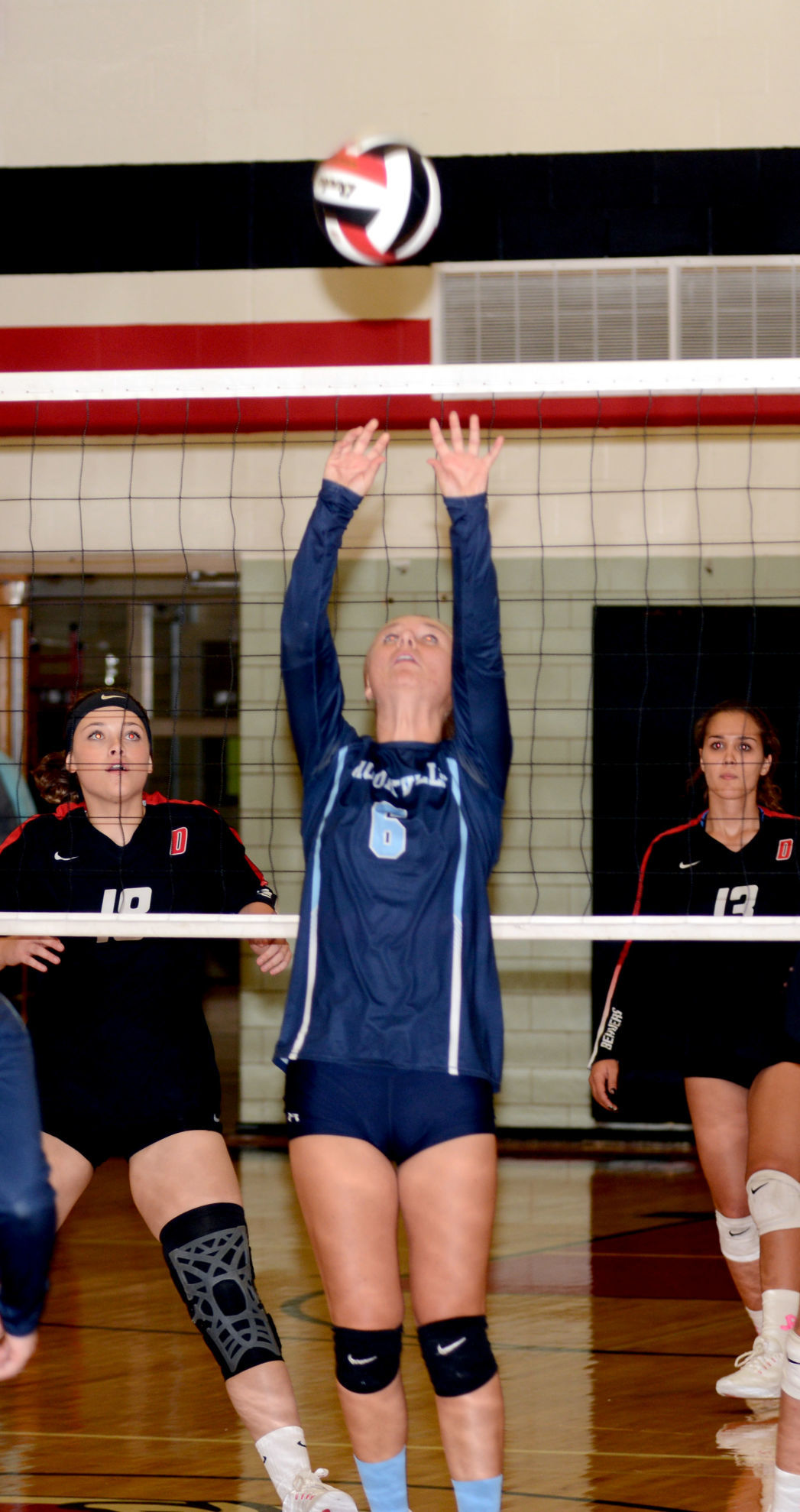 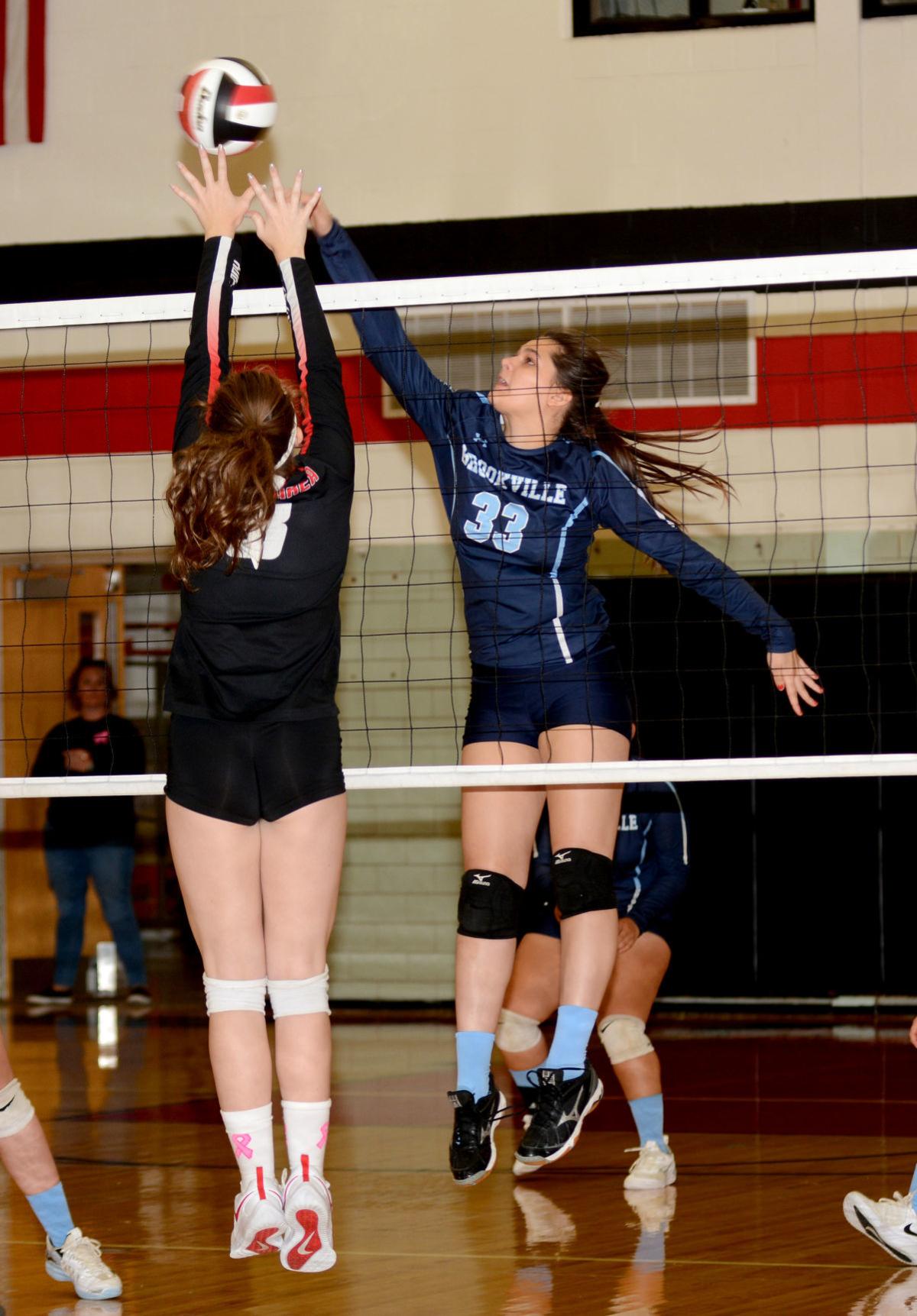 Brookville's Maggie Mackins (33) hits a shot over the block attempt of DuBois' Brynlie Galiczynski Tuesday night. Mackins recorded a team-high five kills and one block in a five-set loss to the Lady Beavers.

DuBois’ Taylor Smith (18) hits a spike past the block attempt of Brookville’s Maggie Mackins (33) Tuesday night. Smith had eight kills on the night.

Brookville's Maggie Mackins (33) hits a shot over the block attempt of DuBois' Brynlie Galiczynski Tuesday night. Mackins recorded a team-high five kills and one block in a five-set loss to the Lady Beavers.

DuBOIS — The DuBois volleyball team entered Tuesday’s night match against Brookville having lost just two sets during the regular season — one each in a pair of four-set wins against Bradford.

Brookville (9-3) matched that total alone Tuesday — splitting the first four sets with the Lady Beavers — while giving DuBois all it could handle. Brookville had DuBois on the brink of its first loss with the fifth-and-deciding set knotted at 13 in the race to 15 points.

However, DuBois’ Taylor Smith came up with a big kill for a sideout following a timeout after Brookville’s Morgan Johnson had pulled the Lady Raiders even with a pair of points.

DuBois’ Kaylee Sadowski then toed the service line and collected match point when Cayla Donahue arched a shot over a Lady Raider at the net and it dropped the floor in front of a diving Johnson to give DuBois a thrilling 5-set victory, 25-14, 18-25, 25-12, 23-25, 15-13.

DuBois libero Alayna Cornelius came up with a nice dig to set up Donahue’s match-ending hit.

Sadowski (9 kills), Smith (8 kills) and Donahue (7 kills) all had their moments at the net, but DuBois’ workhorse all match long was Sydney Kaschalk, who finished with match highs in kills (20) and blocks (8).

Despite DuBois’ decided advantage at the net, Brookville used its scrappy defense to stay in the match and gave the Lady Beavers fits at time. DuBois committed more unforced errors than it is accustomed to, due largely to having more balls played back to them than in most matches.

The loss ended an eight-match winning streak for Brookville following a loss to A-C Valley in the ensuing match after the first meeting with DuBois.

“I knew coming in that they (Brookville) were going to give us a fit,” said DuBois coach Jason Gustafson. “They play great defense and we in certain rotations just didn’t have the firepower tonight to put the ball away. Then it was a matter of who is going to make the mistakes first ... us or them.

“I definitely don’t feel that we played our best, but that’s up to us. That has nothing to do with Brookville. They forced us into a ton of mistakes and we definitely were not up for the challenge.

“We leaned on Sydney (Kaschalk) a ton at the end. She carried us a ton, but she also had some errors done the stretch that were at inopportune times too. They won the game as a team, and we put ourselves in a bad position as a team, but give credit to Brookville. They played a great match, and we stole one tonight I believe.”

The first set was all DuBois as 3-point service stints by Laken Smith and Kaschalk gave the Lady Beavers a quick 12-5 lead. Brookville countered with three straight aces by Madison Johnson to get within three (12-9), but DuBois pulled away from there.

Two points by Cornelius and a four-point spurt by Cate Gregory made it 22-12 before Laken Smith finished off the set with back-to-back aces. Gregory led all players with 22 points, while Cornelius and Smith added 12 and eight, respectively.

Brookville didn’t drop its heads after the first set loss and responded with a strong second set to even the match.

Two points Leah Kammerdeiner and three from Madison Johnson have the Lady Raiders an early 10-4 advantage, while three more points from Megrah Suhan later pushed that lead to 16-8.

The Lady Raiders finished off the set with two points from Morgan Johnson, including an ace on set point.

The momentum swung back to DuBois in the third set, thanks in large part to an eight-point run by Gregory that have DuBois a commanding 12-2 lead. Gregory had a pair of aces in the run, while Kaschalk had a pair of kills.

Brookville never recovered from that run as DuBois went on to win the set 25-12.

It appeared DuBois had seized the momentum, but that proved not to be the case as Brookville opened the fourth set with a three-point spurt by Suhan.

Two more points by Brooke Ganoe put the Lady Raiders up 6-2 before DuBois stormed back with a six-point run by Gregory that featured two kills and a block by Kaschalk to put DuBois on top 9-6.

After a series of sideouts, Brookville got three points from Morgan Johnson and two more by Suhan to take an 18-14 lead.

DuBois countered with a sideout and three points by Cornelius to pull momentarily pull even at 18-18, but a sideout and two points from Ganoe promptly put the Lady Raiders back out front 21-18.

Brookville maintained that slim two-point cushio the rest of the way, pulling out the set 25-23 to force the fifth-and-deciding set.

Ganoe led Brookville with nine points, while the Johnson twins and Suhan all had eight.

DuBois opened the fifth with back-to-back points by Sadowski. That 2-0 lead was short-lived though, as Brookville used a four-point spurt from Ganoe to take a 6-3 lead.

Gustafson called a timeout, a move that paid off as DuBois got a sideout on the ensuing point. Donahue then scored three straight to put DuBois back up 7-6. The set was nip-and-tuck from there before a sideout and three straight points by Hannah Ray put DuBois up 13-10.

Brookville had one last counter, getting a sideout and a pair of points by Morgan Johnson to tie things up (13-13) before DuBois pulled out the win.

“It was hard fought,” said Brookville coach Joyce Reitz. “They have the power 9at net) and we don’t have someone who can drive it down like they do. But, we pride ourselves on playing good defense and we did that tonight. The kids worked hard

“The first time around it wasn’t enough close. So, to come back and play five sets against them is a tremendous effort by our kids. There are a lot of positive things we can take out of this (even though a loss) and take forward as we move towards the end of the season.”

Both teams are back in action Tuesday. DuBois travels to Punxsutawney, while Brookville hosts Curwensville.