DuBois’ Natalie Sprague competes in the 100 breastroke in a meet against Clearfield Monday. Sprague, who took second in the event, was one of nine DuBois seniors recognized at the Senior Night meet. 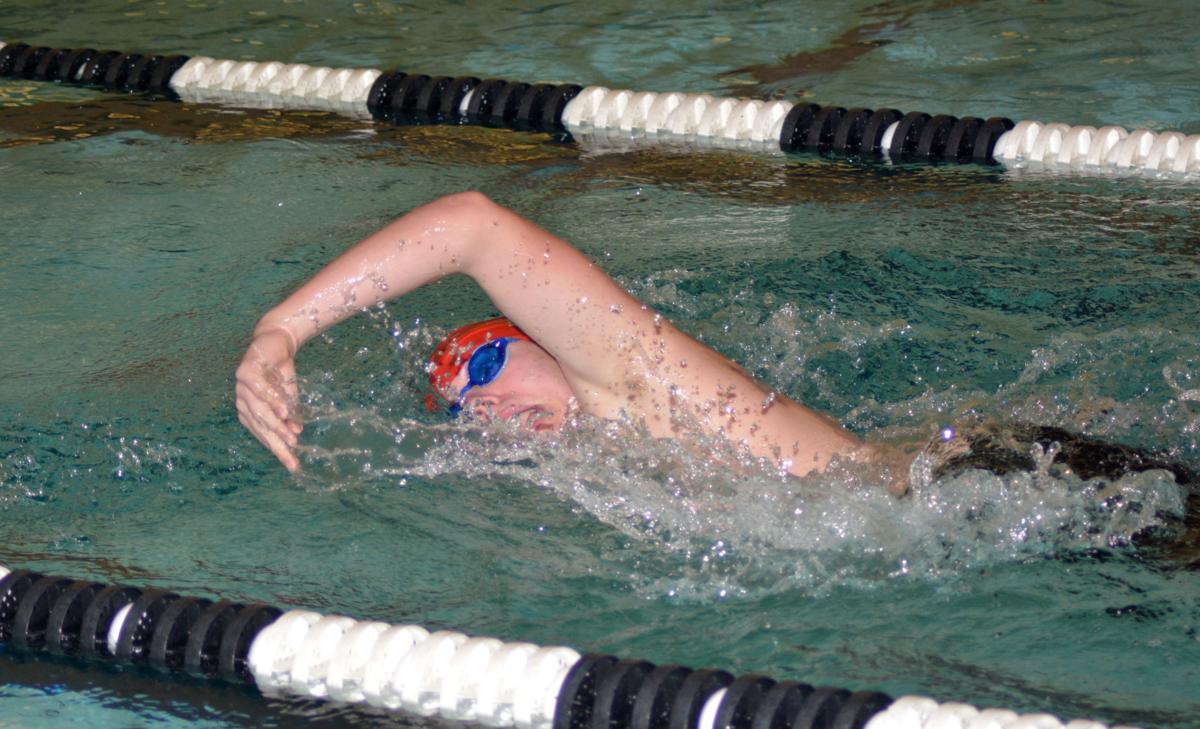 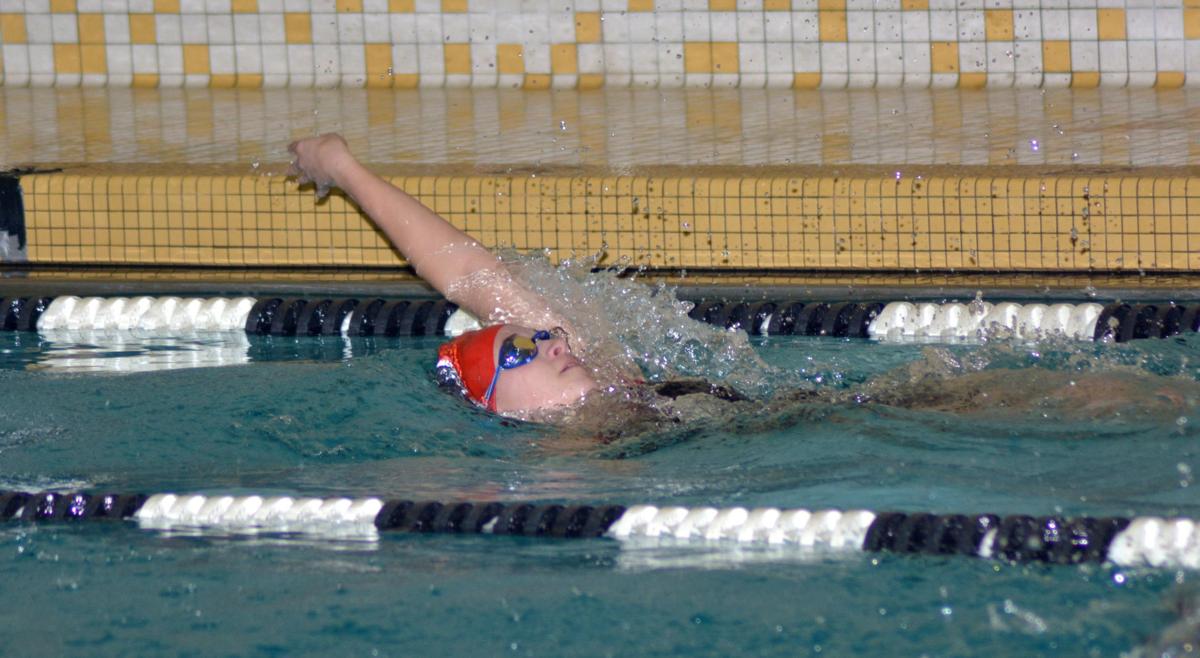 DuBois’ Tori Gregory swims in the 100 backstroke during the Senior Night meet against Clearfield Tuesday. Gregory, a senior, finished fourth in the race. 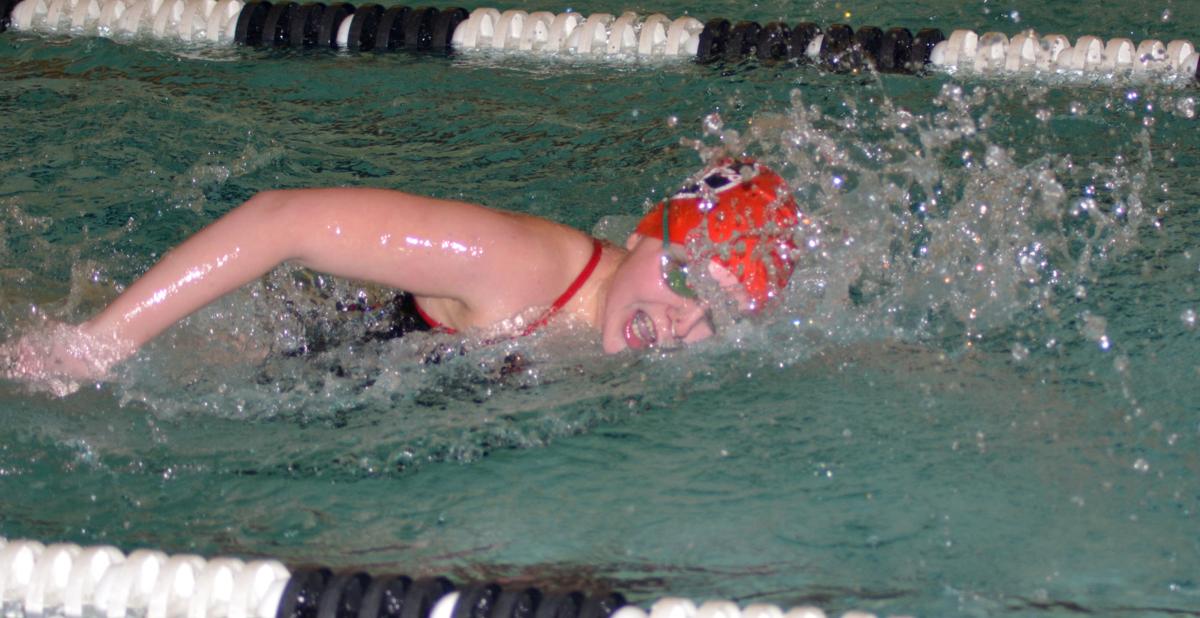 DuBois senior Allyson Andrulonis swims the third leg of the 400 freestyle relay during a meet against Clearfield Monday.

DuBois’ Natalie Sprague competes in the 100 breastroke in a meet against Clearfield Monday. Sprague, who took second in the event, was one of nine DuBois seniors recognized at the Senior Night meet.

DuBois’ Tori Gregory swims in the 100 backstroke during the Senior Night meet against Clearfield Tuesday. Gregory, a senior, finished fourth in the race.

DuBois senior Allyson Andrulonis swims the third leg of the 400 freestyle relay during a meet against Clearfield Monday.

DuBOIS — The DuBois swim team split with Clearfield, with the girls securing a 96-84 win and the boys falling 122-60 on Senior Night Monday.

“I’m proud of all my seniors, they put in four years of hard work and for the girls to have a victory tonight it feels real good,” DuBois head coach Mike Gressler said.

The head coach added that all nine seniors have had a positive impact on the team over the last four seasons and each one has improved greatly since they started out in their freshmen seasons.

The Lady Beavers opened the night by taking first place in the 200 medley relay from the team of Elle McMahon, Carnesali, Jessica Brant and Stainbrook, who finished nearly six seconds ahead of the field with a time of 2:04.43.

After the Lady Bison earned a win from Karli Bietz in the 200 freestyle, Rayna Fenstermacher picked up DuBois’ second and last win of the night in the 200 individual medley by posting a time of 2:22.68.

Gressler said Fenstermacher has been working hard to improve her time in the 200 IM, which led to her finishing with a lifetime best time in the meet.

Abby Dressler and Andrulonis took second and third respectively in the 200 free, something Gressler stressed for his team heading into the meet.

“For the girls, I told them before the meet that it was going to be a team effort,” Gressler said. “It was all about trying to get those first places when we can and then getting second, third and fourth.”

The head coach said the team swam hard and he was proud of their effort from start to finish.

Clearfield was able to take first place in eight of the 11 swimming events on the night, but in all eight of those races, the Lady Beavers took both second and third place.

While Clearfield’s Abby LaBorde took first in the 50 fee, the Lady Beavers once again took second and third in the event, with Cornelius and Stainbrook going 2-3.

After DuBois’ nine seniors were honored, as well as Clearfield’s seniors being recognized, the meet entered its diving portion, which only had Bison competitors.

Josie Grace took first place in the 1 meter dive for the Lady Bison with a score of 197.15.

LaBorde picked up her second win of the night for Clearfield in the 100 free, ahead of Fenstermacher and Stainbrook for DuBois.

In the 500 free, Bietz earned another win for the Lady Bison, followed by McMahon and Andrulonis for the Lady Beavers, then DuBois took second and third in the 200 free relay behind Clearfield’s team of Abby LaBorde, Bietz, Christina McGinni and Makeeli Redden.

Dressler and Brant took second and third in the 100 backstroke behind Redden, while Carnesalie and Sprague finished 2-3 in the 100 breaststroke after Raegan Mikesell.

The Lady Beavers closed out the night by taking second in third in the 400 free relay to close out the 96-84 win.

On the boys side, Clearfield swept all 12 events on the night, as the Beavers earned seven second place finishes.

“The guys they went in and raced really hard as well,” Gressler said. “I know the final score is very much in Clearfield’s favor, but they really raced hard.”

In the opening event, the 200 medley relay, Isaac Swanson, Noah Jordan, Luke Mikesell and Elliot Thorp took first place for the Bison, while DuBois was able to take second and third in the event.

Wayne also took second in the 500 freestyle on the night, while Tucker Fenstermacher secured another second place finish in the 100 free.

DuBois also earned a second place finish from Ian Meterko in the 100 backstroke on the night.

The Beavers closed out the meet with a second place finish from the team of Kolton Gwizdala, Wayne, Logan Wells and Tucker Fenstermacher in the 400 free relay.

Gressler noted that Stevens continues to improve his time in the 500 and pushed hard the entire race to finish in the top-3.

Gressler said going up against a talented opponent in Clearfield for the second time this season is a good way to gauge his team’s improvements, noting the biggest goal is improving individual times.

“It always comes down to you against the clock and the biggest enemy has in swimming is the person between your ears,” Gressler said. “It’s nice to go against another quality team because they are doing the same thing, pushing hard to improve their times.”

The head coach said fatigue is beginning to come a factor at the 10-week mark of the season and have been slowing down overall times.

Gressler noted that with the regular season nearing its end, several swimmers will begin resting for the team’s final dual meet in hopes to earn a qualifying time for the district meet.