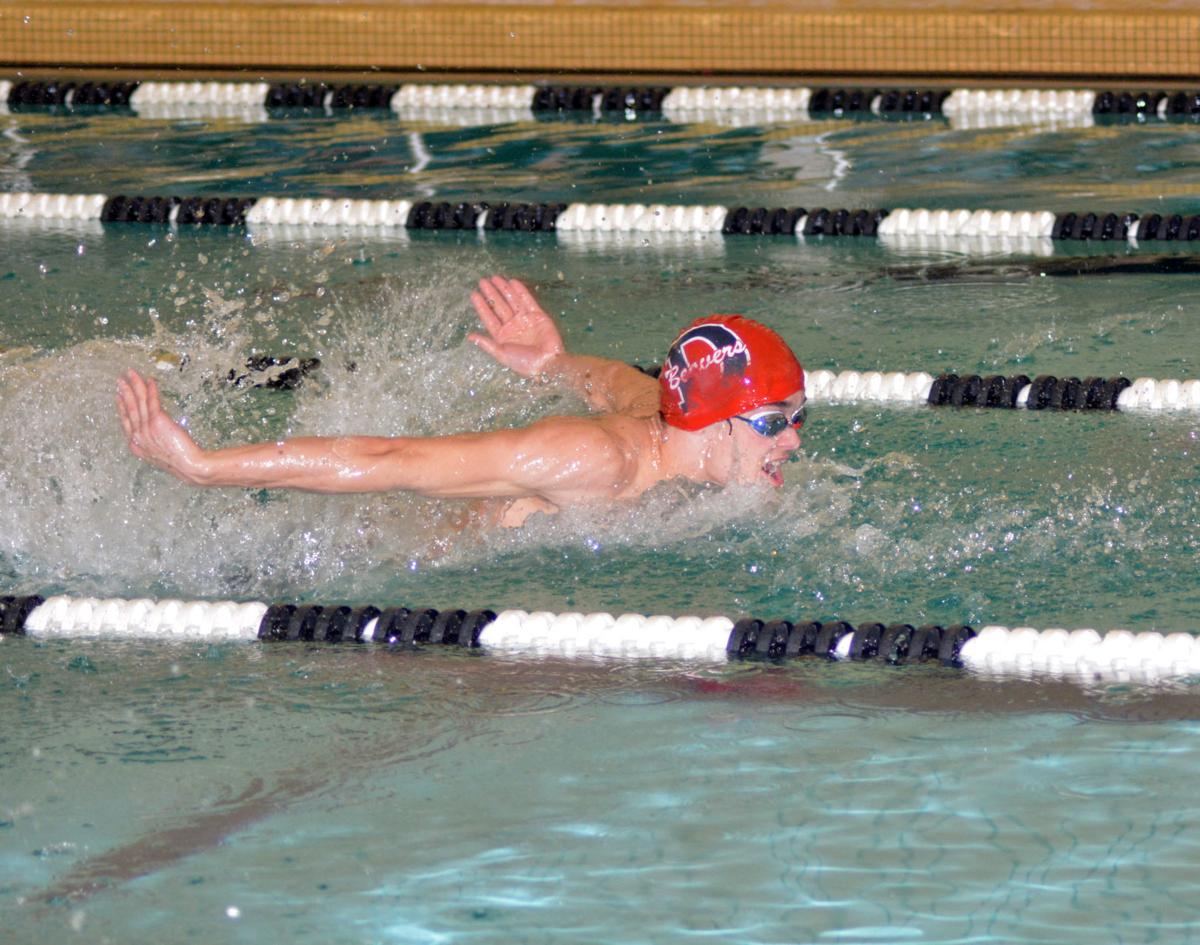 DuBois’ Logan Wells competes in the 100 yard butterfly in a meet against Bradford Thursday. Wells took second in the event, while also taking first as a member of the 400 free relay and 200 medley relay teams and finishing third in the 100 backstroke. 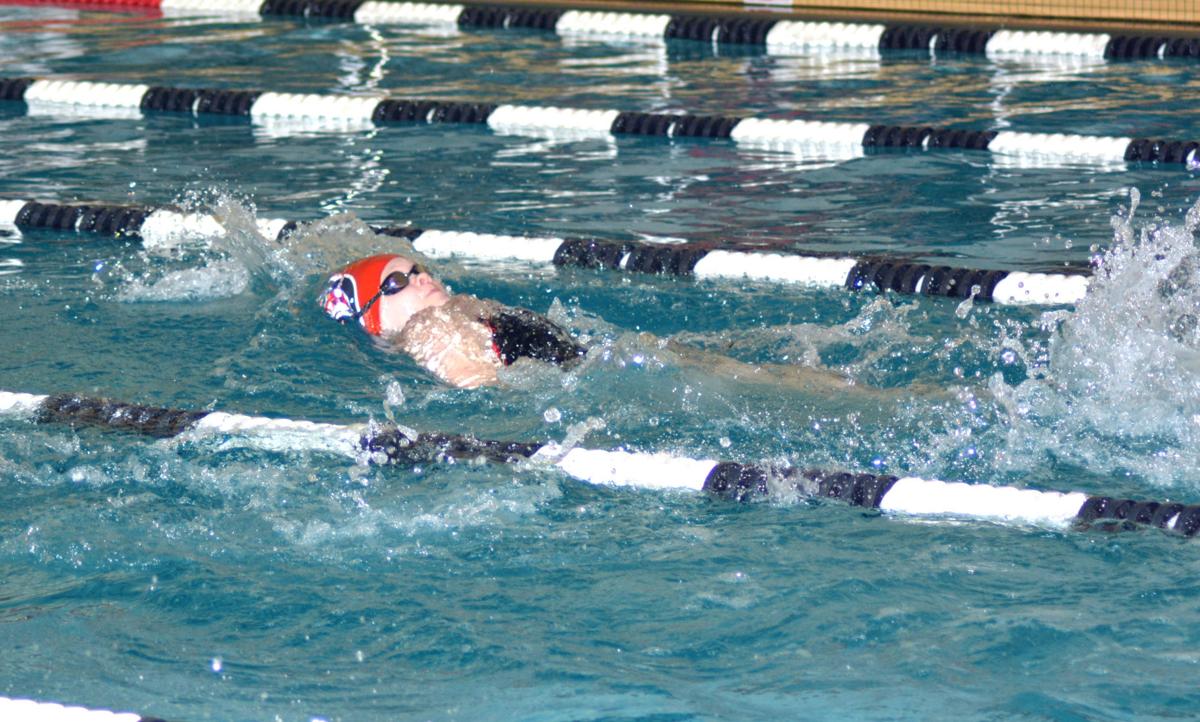 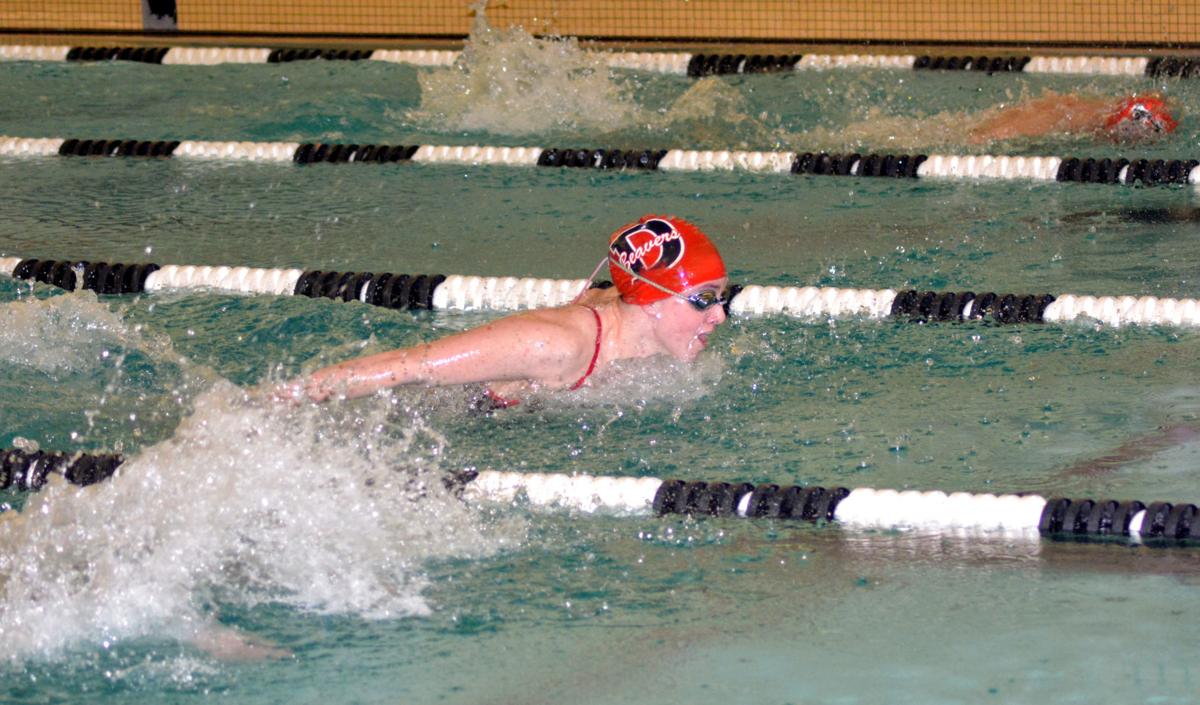 DuBois’ Alayna Cornelius swims in the 100 yard butterfly in a meet against Bradford Thursday. Cornelius took second in the event, while finishing first as a member of the 200 medley and 200 free relay teams and taking third in the 200 IM.

DuBois’ Logan Wells competes in the 100 yard butterfly in a meet against Bradford Thursday. Wells took second in the event, while also taking first as a member of the 400 free relay and 200 medley relay teams and finishing third in the 100 backstroke.

DuBois’ Alayna Cornelius swims in the 100 yard butterfly in a meet against Bradford Thursday. Cornelius took second in the event, while finishing first as a member of the 200 medley and 200 free relay teams and taking third in the 200 IM.

DuBOIS — The DuBois swim team swept Bradford in a home meet Thursday, with the boys recording a 110-50 win and the girls winning 102-73.

The meet was the Beavers’ third over the previous week, as they also swam at Clearfield’s Arctic Swim Saturday and had a dual meet at Clearfield Tuesday, which they split with the Bison.

“I was glad to see that they were still going in and racing hard,” DuBois head coach Mike Gressler said. “Bradford came in and I was really impressed with the way they swam, they’ve got some kids who are real quick.”

The head coach added that he mixed up the lineup some this time out to keep some of his swimmers fresh after the busy week.

The Beavers got the night started on a high note as both the girls and boys 200 medley relay teams secured victories to begin the meet.

On the girls side, Rayna Fenstermacher, Cassie Carnesali, Alayna Cornelius and Abby Dressler took first place with a time of 2:03.72.

“I was really happy with the girls medley relay,” Gressler said. “We haven’t swam that race in a while with some of our top swimmers, so that was nice to see and I was real proud of them there.”

Ian Meterko, Tucker Fenstermacher, Logan Wells and Kolton Gwizdala teamed up to take first place on the boys side at 1:48.59.

In the third event of the night, DuBois’ Allyson Andrulonis and Anna Wingard battled it out with Bradford’s Mackenzie Lucas in the 200 freestyle.

The Owls picked up their first two wins of the night in the boys 200 free (Karl Gangloff) and the girls 200 individual medley (Emma Webster).

DuBois’ Tino Deemer and Mitchel Drahushak took second and third respectively in the 200 free, while Dressler and Cornelius went 2-3 in the 200 IM.

On the boys side of the 200 IM, Gwizdala secured a first place finish for the Beavers with a time of 2:17.30, while teammate Isaac Wayne took second.

In the girls 50 freestyle, Rayna Fenstermacher was edged by Bradford’s Julia Moini by just .23 seconds for first place, as Trista Truesdale took third for DuBois.

Meterko and Kaleb Stevens took first and second respectively for the Beavers in the boys 50 free.

DuBois swept the 100 freestyles, with Dressler taking first on the girls side with a time of 58.48, while Deemer secured a first place finish on the boys side at 55.03.

“We’ve been waiting for her (Dressler) to go under a minute in that (100 freestyle) for a long time, so I’m glad she was finally able to get under,” Gressler said.

Stevens took third place in the 100 free for DuBois with a time of 58.28, a time he had been working towards throughout the season.

“Stevens is another one that’s been sitting right on that edge, trying to get under a minute and he was able to drop some time,” Gressler said.

Bradford responded by sweeping the 500 freestyles, as Rayna Fenstermacher took second for the Beavers on the girls side and Wayne finished second on the boys side.

In the girls 200 freestyle relay, DuBois took first, second and third, as the team of Dressler, Trulee Stainbrook, Rayna Fenstermacher and Cornelius took first place in commanding fashion with a time of 1:49.49, more than nine seconds ahead of the field.

The boys 200 free relay also saw a commanding victory, as DuBois’ Deemer, Stevens, Josh Singler and Meterko secured first with a time of 1:44.53.

After Bradford’s Lucas took first ahead of DuBois’ Truesdale and Natalie Sprague, the boys race saw one of the more exciting finishes of the night.

DuBois’ Meterko and Bradford’s Tyler Sortore were neck and neck throughout the entire race, as Meterko reached the wall just a split second sooner, finishing in first with a time of 1:00.24, as Sortore finished at 1:00.28.

After Bradford secured a victory in the girls 400 freestyle relay, DuBois closed out the night with a win in the boys 400 free relay, as Gwizdala, Wayne, Wells and Tucker Fenstermacher won by nearly 15 seconds with a time of 3:35.91.

“We’ve got a lot of people who are cooking along and doing really well,” Gressler said.

The head coach added that his team’s depth has given them an opportunity to mix things up with their relay teams and he continues to see good results no matter the groupings he sends out.

Gressler noted that all those swimmers will be battling it out for a spot on the relay teams in the postseason.

“You have completion not just at meets, but also every single day in practice,” Gressler said. “Every day they are trying to push one another.”

“Some days some have it and some days they don’t, but no matter what happens they are always there to pick each other up.”

DuBois is back in action Jan. 21 as they host Brookville.