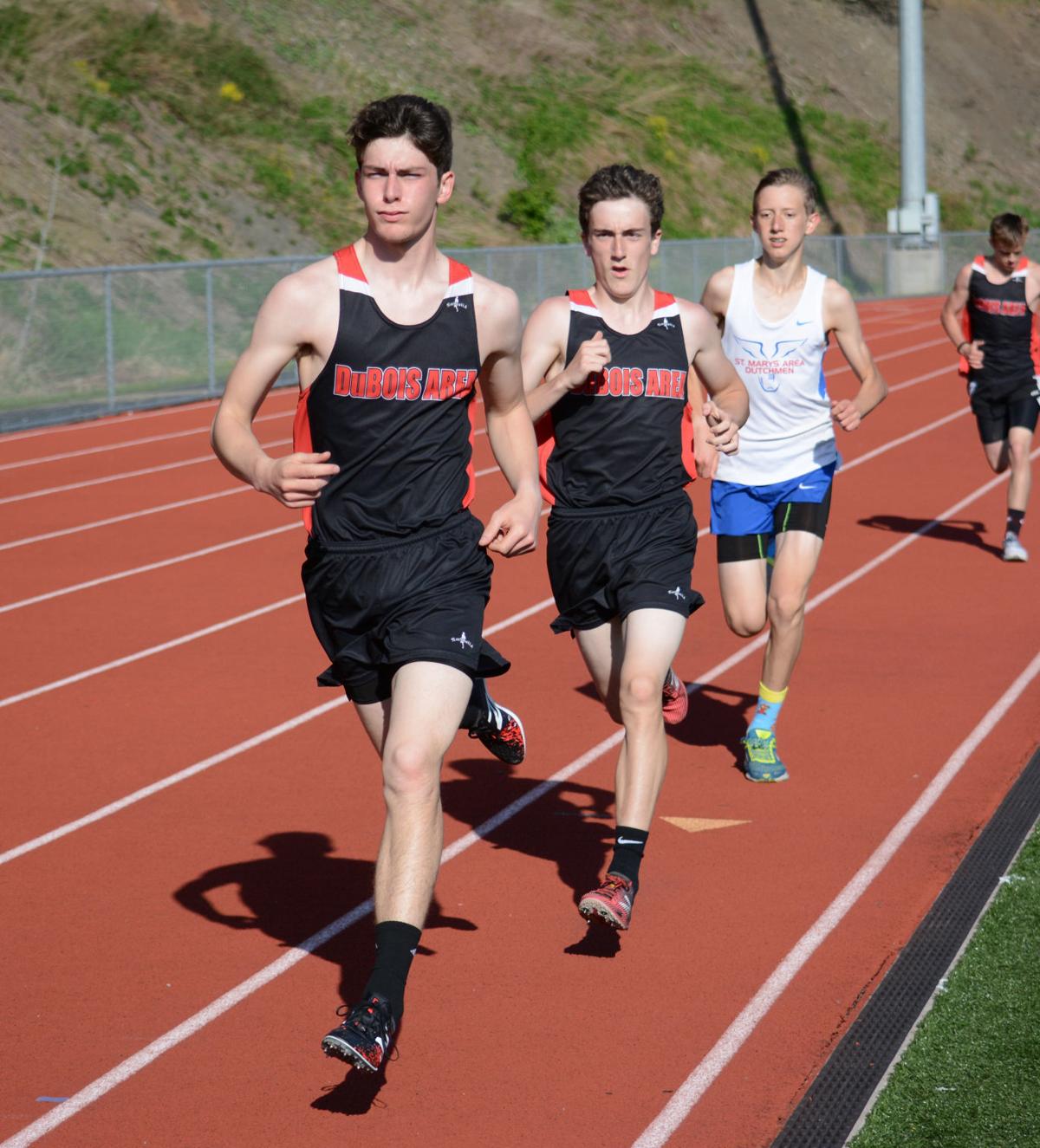 DuBois’ Andrew Boyle leads teammate A.C. Deemer in the 800 run Monday against St. Marys. Boyle was a triple winner in his Senior Night meet — crossing the line first in the 800 while running legs on the Beavers’ 4x800 and 4x400 relay teams that won. 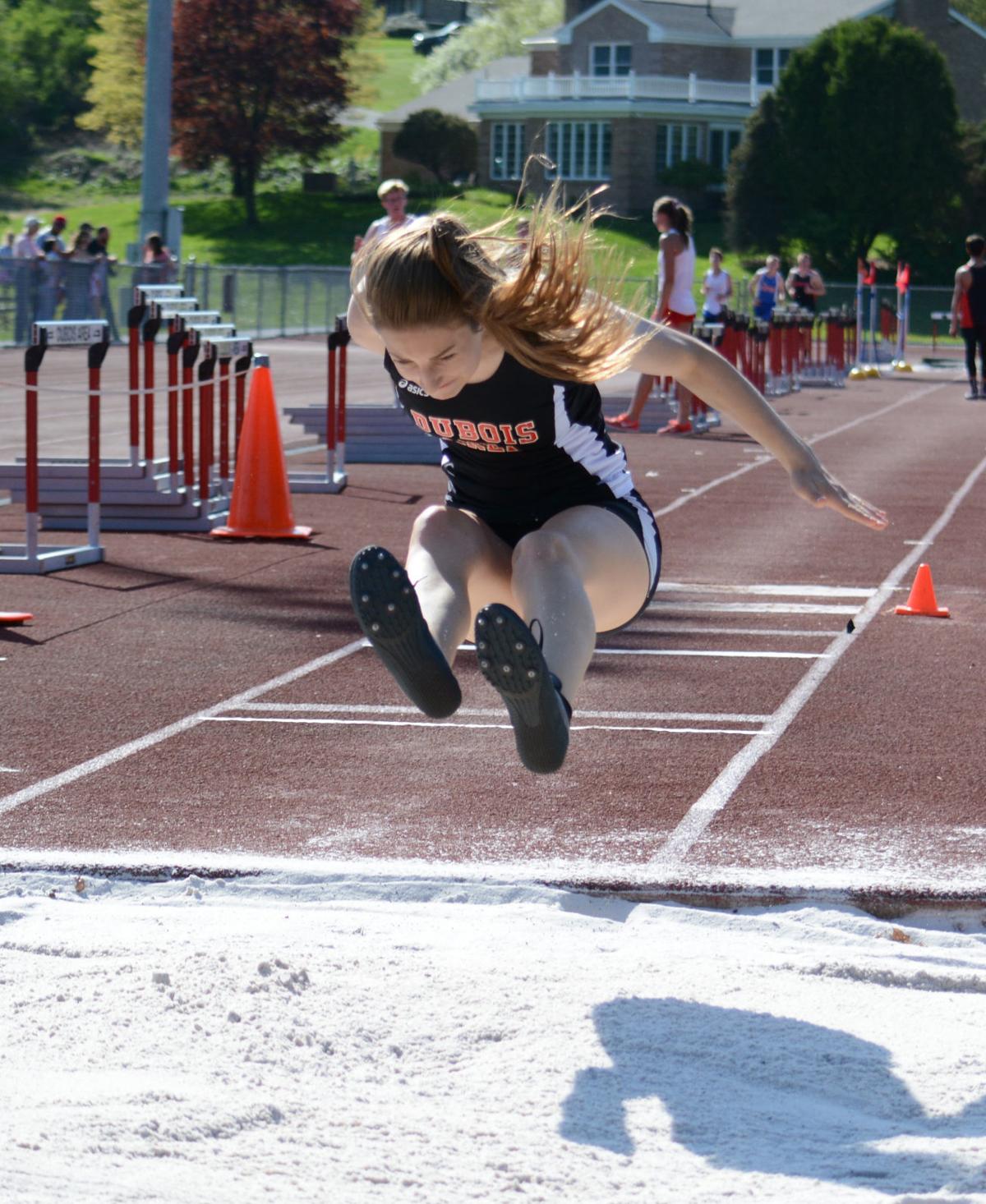 DuBois’ Jerica Fischer stretches for the triple jump pit Monday against St. Marys. Fischer won all three jumping events on Senior Night. She was one of 18 seniors honored before the meet.

DuBois’ Andrew Boyle leads teammate A.C. Deemer in the 800 run Monday against St. Marys. Boyle was a triple winner in his Senior Night meet — crossing the line first in the 800 while running legs on the Beavers’ 4x800 and 4x400 relay teams that won.

DuBois’ Jerica Fischer stretches for the triple jump pit Monday against St. Marys. Fischer won all three jumping events on Senior Night. She was one of 18 seniors honored before the meet.

A majority of those seniors honored played a role in both wins.

On the girls’ side, Lady Beaver seniors played a role in six of the team’s 10 wins on the day,

Three other seniors captured wins in field events as well. Gabby Snyder-Petitti won the the discus (99-11) and was second in the shot put, while Ally Andrulonis took home top honors in the javelin (90-9). Heather Gilga added a win in the pole vault (8-0).

“Once again Jerica put the team on her back and lead a jumping contingent that out scored St. Marys 26-1 in the three jumping events,” said Lady Beavers coach Scott Sullivan. “She just barely missed tying the high jump school record (5’4) again and then dominated the long and triple jumps.”

“Antonia has a nice day running a career best in the 100 meter dash and then anchoring the 4x 100 team to victory.”

“Em (Horner) also had huge day for us getting big points in the mile and then winning the 2 mile to seal the team win. Gabby 9Snyder-Petitti) had a big day in the discus, throwing a D-9 No. 1 seed distance of 99’11. She just missed repeating in the shot put by only three inches. In the preseason we thought she could win both events and after today there is no reason that cannot happen!”

“Other career bests today included, Heather Gilga in the pole vault (8-0), Ally Andrulonis in the javelin (90-9) and Dani Baumgartner in the discus (98-0).

The Lady Beavers also collected runner-up finishes in 11 of the 15 individual events.

Horner was second in the 1,600, while Kyra Hoover was second in the 400 and 800. Morgan Allman added runner-up finishes in the long and triple jumps. Other Lady Beavers who came in second were Fenice (200), Madee Finalle (100 hurdles), Izzy Geist-Salone (high jump) and Danielle Baumgartner (javelin).

“If you would have told us two months ago we would finish the season with a 7-2 record we would have thought you were crazy,” said Sullivan. “We honestly thought a 500 season was a pipe dream. This team has over achieved all season and we cannot be more proud of them.”

The 4x800 relay of Hayes, Kyla Johnson, Grotzinger and Quesenberry ran a 10:56.56 to take first, as did the Lady Duth 4x400 relay squad. names were not available for that squad.

On the boys’ side, DuBois won 12 of the 18 events — with seniors playing a role in seven of those victories.

Andrew Boyle led that effort as a triple winner. He took an individual win in the 800 (2;11.73) and was part of two relay squads that crossed the line first.

Ashenfelter also helped lead the 4x100 relay to a win, as he joined forces with Derraick Burkett, Ruben Estrada and Luke Sturrock to post a time of 45.97.

Seniors Ashenfelter (100) and Stevens (3,200) were among DuBois’ third-place finishers.

“I was nice to end the regular season on senior night with a win,” said Beavers coach Brian Clinger. “Seniors Andrew Boyle and Brenden Saunders both had really nice days for us, as did Jordan Meintert, Damien Ashenfelter and Kaleb Stevens in the events they competed in.

“As a coaching staff, we would like the congratulate all the seniors and wish them the best on their future endeavors.”

Both teams close out there seasons at invites on Thursday. DuBois while be at the Redbank Valley Invite, while St. Marys competes at the Elk County Meet in Johnsonburg.

NOTICE The Beaver Township Board of Supervisors is canceling the

NOTICE Sealed proposals for 2020-2021 supply of stone will be

NOTICE Notice is given that Letters Testamentary for the Estate