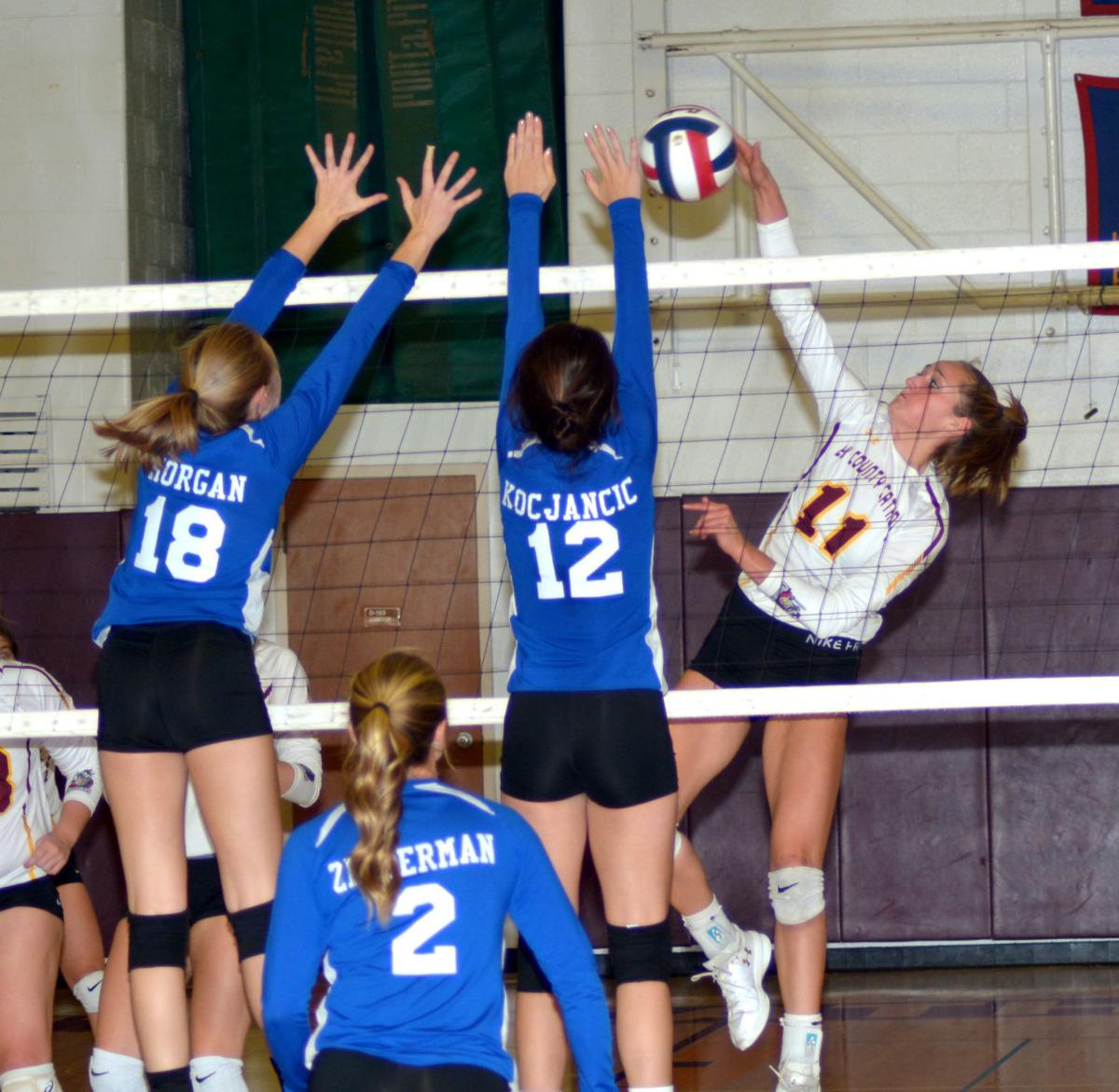 Elk County Catholic’s Taylor Newton (11) fires a kill off the block attempt of Johnsonburg’s Tess Kocjancic (12) as Jenna Morgan (18) also goes for a block during the opening set of Tuesday’s match. Newton finished with 26 kills and 12 service points to help lead the Lady Crusaders to a five-set victory. 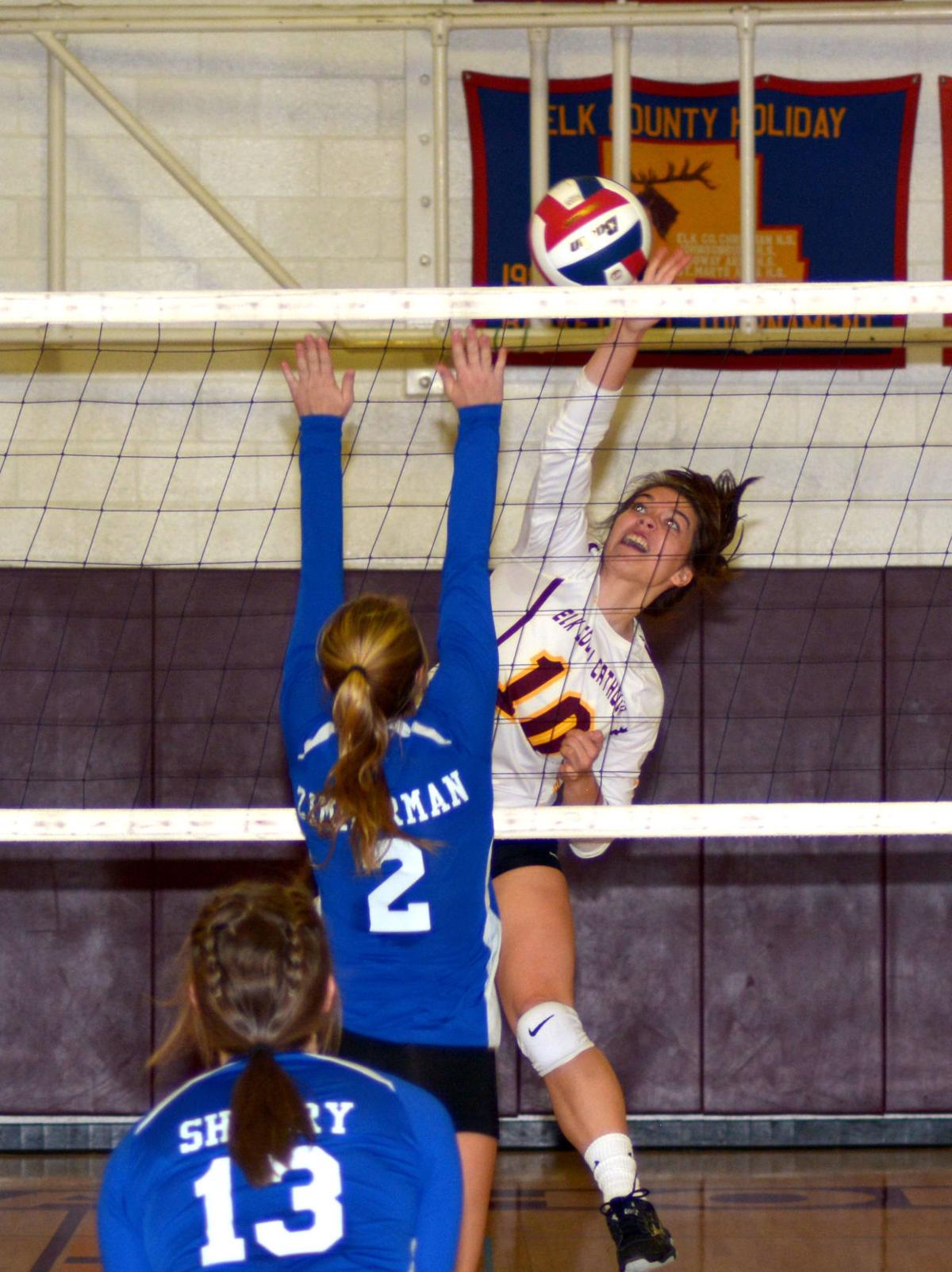 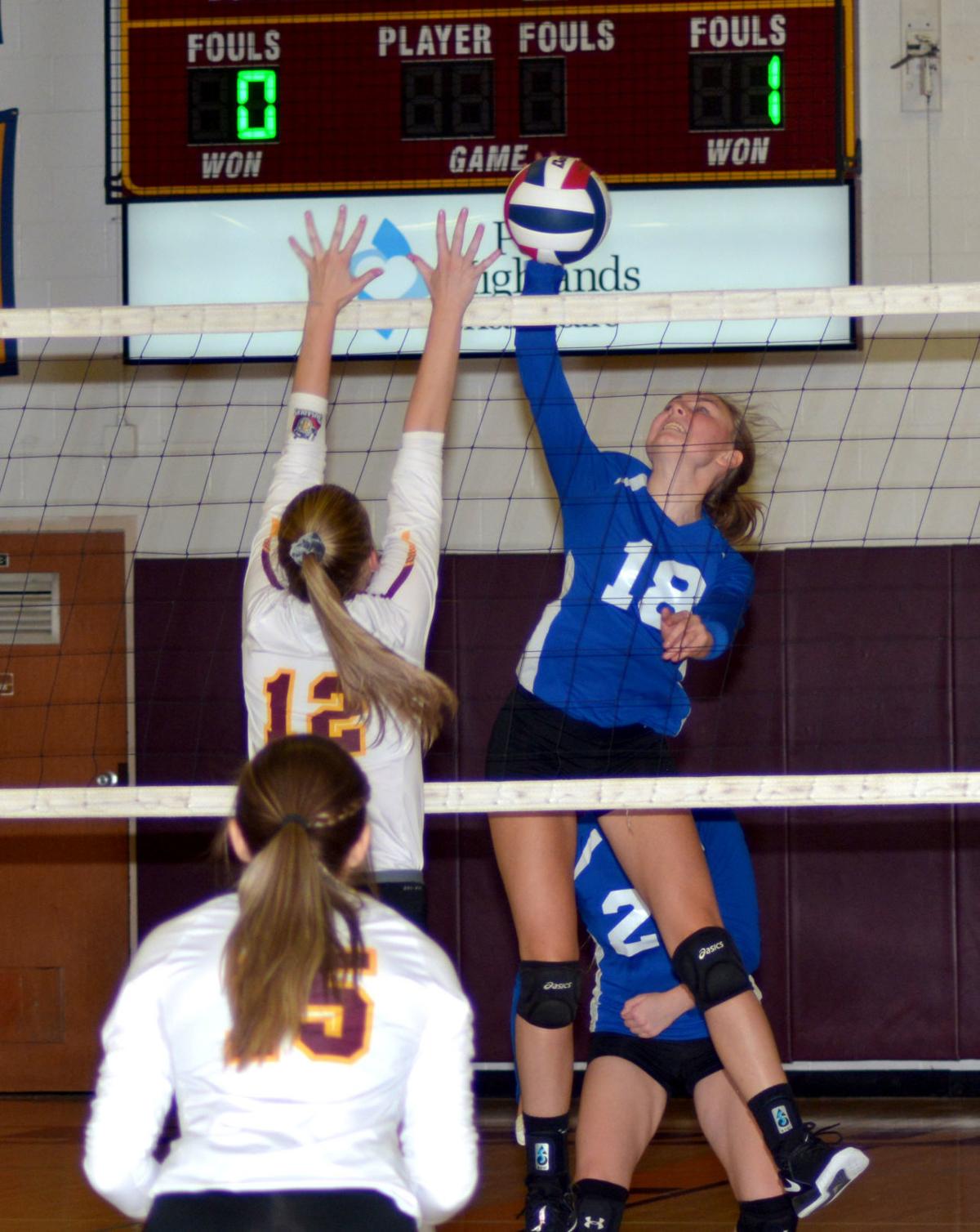 Johnsonburg’s Jenna Morgan (18) sends a kill past the block attempt of Elk County Catholic’s Brooke Bauer (12) during the second set of their match Tuesday. Morgan led the Ramettes with 12 kills in a five-set loss.

Elk County Catholic’s Taylor Newton (11) fires a kill off the block attempt of Johnsonburg’s Tess Kocjancic (12) as Jenna Morgan (18) also goes for a block during the opening set of Tuesday’s match. Newton finished with 26 kills and 12 service points to help lead the Lady Crusaders to a five-set victory.

Johnsonburg’s Jenna Morgan (18) sends a kill past the block attempt of Elk County Catholic’s Brooke Bauer (12) during the second set of their match Tuesday. Morgan led the Ramettes with 12 kills in a five-set loss.

ST. MARYS — Leading two sets to one, eighth-seeded Johnsonburg was on the verge of pulling off an opening round upset over top-seeded Elk County Catholic in the opening round of the District 9 Class A playoffs Tuesday night.

“This was a really big game for so early in the playoffs and I’m really proud of my team for how they played and how hard they worked, they never gave up,” Elk County Catholic head coach Kelsey Morey said.”

“They (Johnsonburg) are an amazing team and I think it’s a shame that they had to go home today because I think they still deserve to be in this tournament.”

After the teams alternated sets, with the Ramettes winning the first and third sets around a second-set win for ECC, the visitors jumped out to an early lead as they looked to close out the victory.

Four straight service points by Haylee Cherry gave Johnsonburg the early advantage, but the Lady Crusaders quickly battled back as a kill by Julia Aikens returned the service to the home side as Aikens herself took the line.

Aikens then rattled off five service points started off with an ace and then helped along by three kills from Taylor Newton, who had a monster night at the net, finishing with 26 kills.

The teams then went back-and-forth before a trio of service points from Brooke Bauer aided by an ace gave ECC a 16-11 edge as it looked to run away with the set.

Instead, a kill from Emma King swung the service back to the Ramettes’ side and four service points by Haylee Zimmerman quickly tied things up at 16.

Then, with the match tied at 17, Madyson Dellaquila came up with a big kill to swing momentum back to ECC’s side, as Aikens followed with a trio of service points along with an ace to give her side the late edge.

Newton later finished off the 25-20 win with her ninth kill of the set as the Lady Crusaders fought back to even the match at two sets apiece.

Just like the fourth set, the winner-take-all fifth set saw the visitors take the lead early, as a side out followed by a pair of Mackenzie Sallack service points, one on a Alaina Sherry kill and the other on an ace, gave Johnsonburg a 3-0 advantage.

The Ramettes continued to hold onto a slim lead before Newton took over the set, as the senior recorded a kill to cut the deficit to 5-4 before taking to the service line, where she won five straight points to give her team a 9-5 edge.

The run included back-to-back ills from Aikens, who finished the match with 10, along with a kill from Bauer and an ace.

Later in the set, a pair of points from the line by Zimmerman helped Johnsonburg trim the deficit down to 10-9.

Hannah Barnett quickly put an end to the run with a momentum-swinging block, as ECC won the following three points to reach match-point at 14-9.

A kill by Sallack kept the Ramettes alive temporarily, but Aikens finished things off by hitting a kill just inside the line to secure the 15-10 set victory and 3-2 match win to send the Lady Crusaders to the next round.

“When they needed to come together they did, it was not easy at times, this game was high intensity and full of aggressive play the whole way through, so I’m just really proud of them and I can’t say enough about their play tonight,” Morey said.

The tone for the entree match was set in the opening set, as the teams exchanged service runs as they traded the lead several times before Johnsonburg came away with a 26-24 win.

With the home side in front 17-14, a side out sent Sherry to the line for the Ramettes, as she then won five points in a row along with an ace to give her team a 20-17 edge.

Elk County Catholic would not go down without a fight, as later in the set a kill by Aikens set up a three-point service run as the home side took a 23-22 lead.

A service point by Cherry later give Johnsonburg set-point, but a side out then evened the match at 24 before kill from Jenna Morgan, who led the Ramettes with 12 on the night, gave them another opportunity at 25-24.

This time a point by Sallack finished things off as the visitors were able to secure the first-set victory.

After an opening set that saw a handful of ties and lead changes, the second set was a much different story, as while it did not run away with things, ECC led from start to finish to even the match at one.

Newton brought her team to set-point with a run of three points at the line to bring the score to 24-17, but Johnsonburg was not done there.

After a side out, four service points by Sherry that included kills by Emma King and Sallack trimmed the deficit down to 24-22.

Sherry’s next service ended with a shot into the net as the Lady Crusaders held on to win the second set 25-22.

The third set was almost a carbon copy of the second, although this time it was Johnsonburg taking the lead early and never letting it up before having to hold off a late rally by ECC.

The Ramettes took a 9-3 lead to open the set and found themselves at set-point after a side out brought the score to 24-18.

Newton kept her team alive with a kill off a service by Sallack, as ECC then won the next four points to get within one at 24-23.

After a long rally on the next point, Sherry finished things off for Johnsonburg with a kill to secure the 25-23 win.

The Lady Crusaders then responded by winning the final two sets to secure the thrilling five-set victory.

“We were caught with some sickness during the season and that put us in the eight seed,” Johnsonburg head coach Bill Shuey said. “I thought we gave them everything we had, I think our kids got tired there in the fifth set.”

“Our girls have nothing to be ashamed of, ECC picked up a lot of our hits and they were hustling too.”

Elk County Catholic will now host fourth-seeded Cranberry in the semifinal round Thursday at 6:30 p.m. with a spot in Saturday’s district title match on the line.