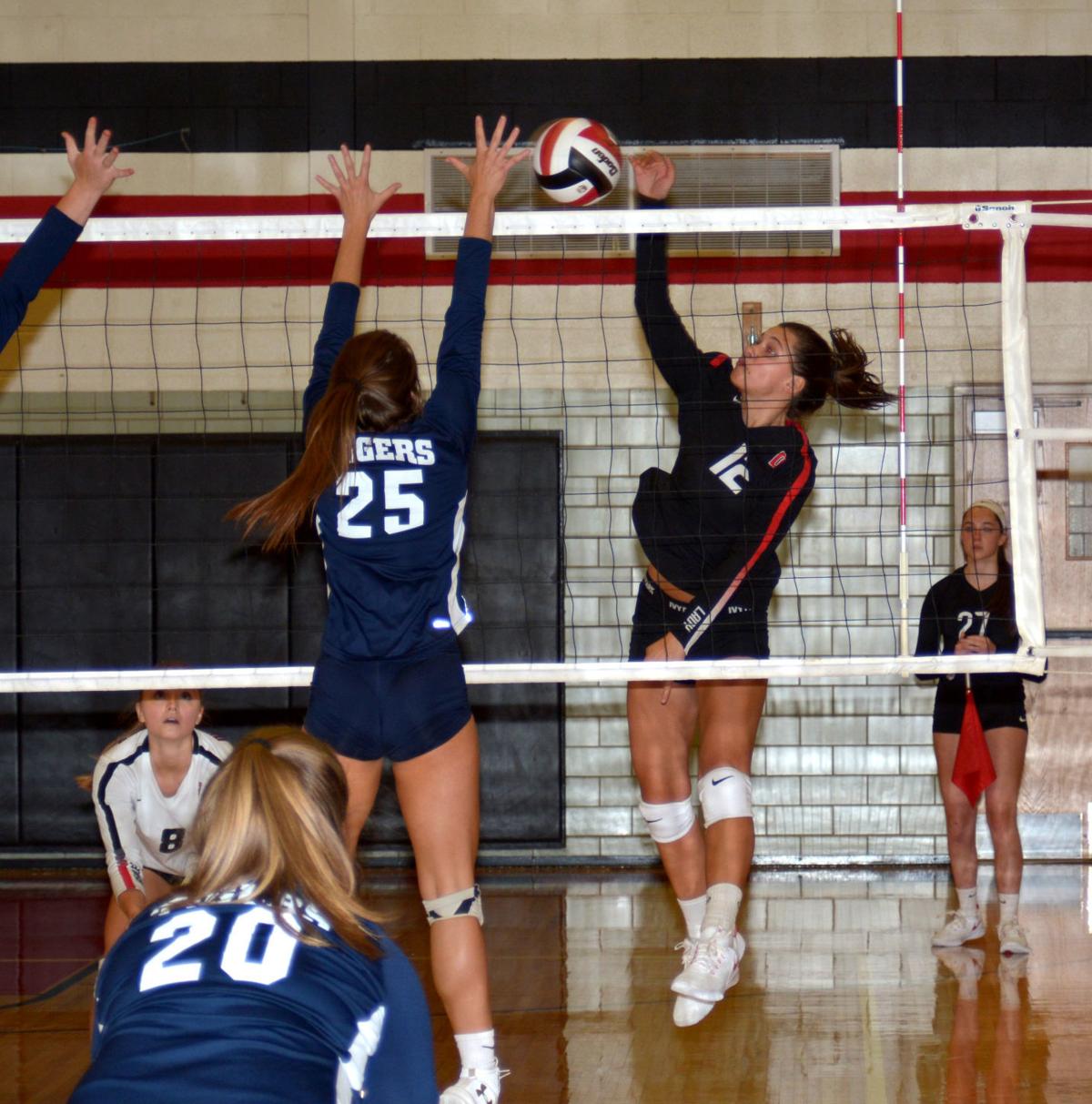 DuBois’ Cayla Donahue (12) hits a kill past Hollidaysburg’s Allison Barton (25) during the third set Monday. Donahue had a match-high 13 kills to lead the Lady Beavers to a three-set victory. 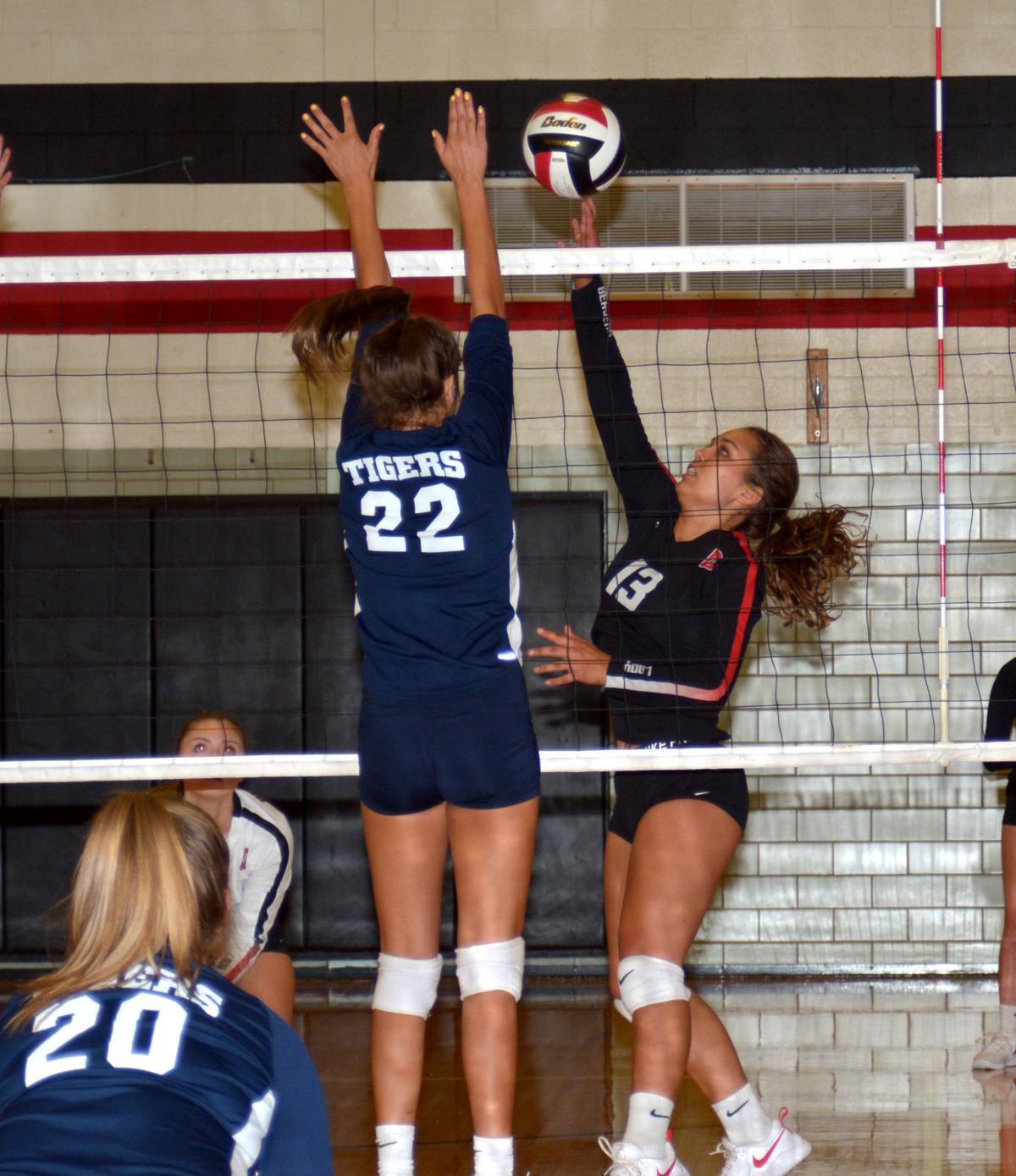 DuBois’ Kaylee Sadowski (13) fires a kill around the outstretched arms of Hollidaysburg’s Rylee Lear (22) during the first set Monday. Sadowski finished with eight kills as the Lady Beavers swept the Lady Golden Tigers. 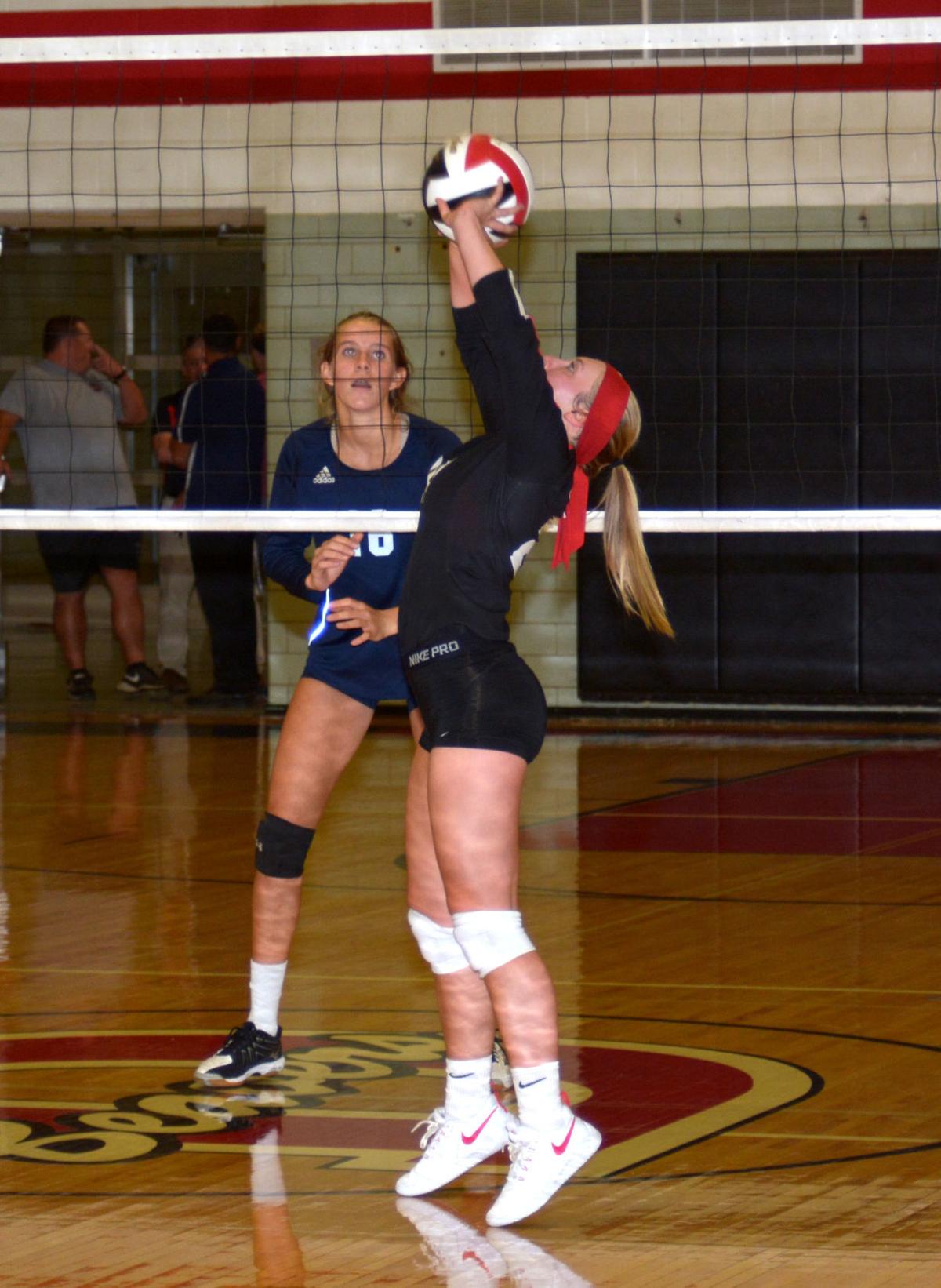 DuBois’ Cate Gregory hits a back set which led to a kill from teammate Kaylee Sadowski during the second set against Hollidaysburg Monday. The Lady Beavers won in straight sets.

DuBois’ Cayla Donahue (12) hits a kill past Hollidaysburg’s Allison Barton (25) during the third set Monday. Donahue had a match-high 13 kills to lead the Lady Beavers to a three-set victory.

DuBois’ Kaylee Sadowski (13) fires a kill around the outstretched arms of Hollidaysburg’s Rylee Lear (22) during the first set Monday. Sadowski finished with eight kills as the Lady Beavers swept the Lady Golden Tigers.

DuBois’ Cate Gregory hits a back set which led to a kill from teammate Kaylee Sadowski during the second set against Hollidaysburg Monday. The Lady Beavers won in straight sets.

DuBOIS — The DuBois girls volleyball team took control right from the opening serve and never let up on the way to a 25-16, 25-19, 25-18 victory over visiting Hollidaysburg Monday.

With the win, the Lady Beavers avenged a five-set loss on the road from last season.

“They (Hollidaysburg) are an experienced team and last year’s loss was a stinging loss honestly because we dropped a five-gamer down there,” DuBois head coach Jason Gustafson said. “I think all in all we came out tonight on a mission and no doubt about it they took care of business.”

Alayna Cornelius took to the service line to start the match, as the senior rattled off seven consecutive service points to give the Lady Beavers control early.

The run included a pair of aces and was also aided by kills from Cayla Donahue and Sydney Kaschalk.

That was just the beginning for the senior duo, as they led the way at the net throughout the match, as Donahue finished with a match-high 13 kills, while Kaschalk added nine kills.

“I like to acknowledge all the kids, but I’ll tell you what, tonight was like a coming out party for Cayla Donahue,” Gustafson said. “She played a level tonight that I have yet to see her play in the four years I’ve coached her.”

After the Lady Beavers jumped out to a 7-0 lead to begin the opening set, Hollidaysburg never got within six points the remainder of the set.

DuBois stretched its advantage to 10 points multiple times late in the set before a Lady Golden Tiger service fault ended the set at 25-16.

The second set saw the Lady Beavers get off to another strong start, as a kill by Donahue was followed by back-to-back kills from Kaschalk on services by Lakin Smith that helped the team take a 6-2 advantage.

A trio of service points from Hannah Ray behind kills from Taylor Smith and Kaylee Sadowski helped push the home side’s lead to 11-4.

Just like it did in the opening set, DuBois held off any attempt by Hollidaysburg to swing the momentum, as the away side only got within four points once from that point on in the second half.

In fact, limiting momentum swings was a key for the Lady Beavers throughout the match, as they never allowed a service run of more than two points, as they only allowed back-to-back service points four times throughout the sweep.

“If you can control the momentum, or minimize the damage if things aren’t going your way, then obviously it’s going to be a good night,” Gustafson said. “We’ve been susceptible to that, there’s times where we’ll give up four, five, six in a row right after we scored six in a row.”

Facing set point in the second set with a 24-19 advantage, Kaschalk put an end to a lengthy point with a block to give DuBois a 2-0 set lead.

The third set saw Hollidaysburg take its first lead in the match, as it jumped out to a 5-1 lead to open the set and continued to hold a lead late as it looked to force a fourth set.

After a Lady Beavers service fault gave the away side an 18-15 edge and the serve, it looked as if Hollidaysburg would be able to stay alive.

Instead, a pivotal block by Taylor Smith gave the service back to DuBois facing a two-point deficit.

Sadowski then stepped to the line and recorded nine straight service points, the third of which giving the Lady Beavers their first lead of the set, on the way to a 25-18 victory.

The senior finished the match off with an ace, as the run included a trio of aces as she finished with four aces, a team-high 12 service points and eight kills.

“We definitely came out a little flat in set three, but like we’ve done all year we had several situations where we are down and battle back and they did it tonight again too with there backs against the wall a little bit,” Gustafson said.

Donahue took over in the third set, as she added nine kills in the final set, including four during Sadowski’s long service run that put an end to the match.

The Lady Beaver head coach said he felt his team played well at the net, but also credited his back row players in Cate Gregory, Lexi Forbes and Cornelius for playing strong defense and controlling the ball well.

“This is a pivotal week in the season with them (Hollidaysburg) tonight and we have Punxsy tomorrow night,” Gustafson said. “We’ve been looking at this week and saying if we can get through this, we could have a good season on our hands.”

DuBois returns to action for a home match against Punxsutawney today at 7:15 p.m.