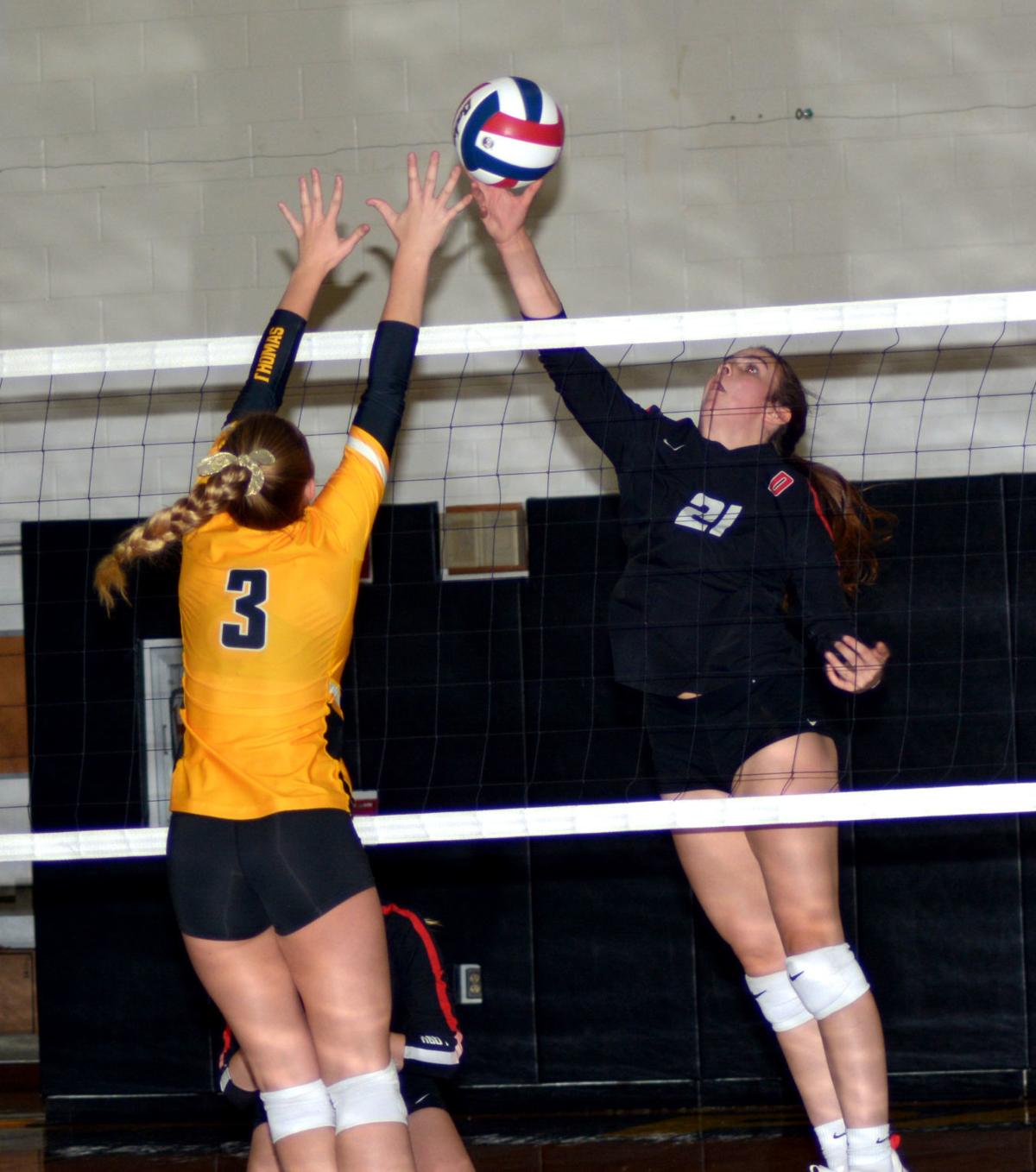 DuBois’ Sydney Kaschalk (21) tips a shot past Thomas Jefferson’s Natasha Yanief (3) during the first set of Tuesday’s PIAA Class 3A first round match. Kaschalk finished with a team-high five kills along with three blocks in a three-set loss. 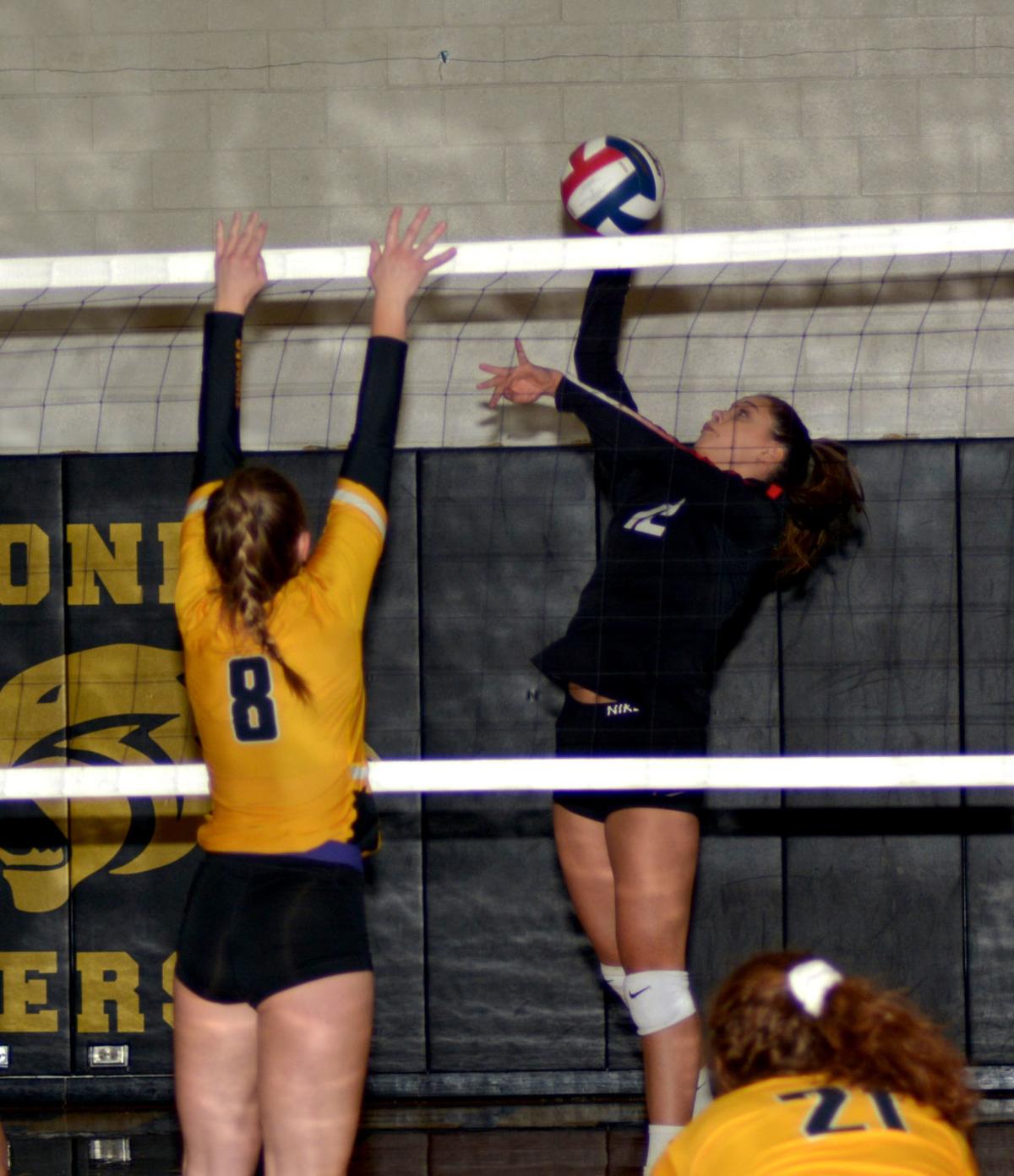 DuBois’ Cayla Donahue (12) sends a shot over Thomas Jefferson’s Abigail Chalovich (8) during the opening set of Tuesday’s PIAA Class 3 first round match. Donahue had four kills for the Lady Beavers who saw their season come to an end with a sweep.

DuBois’ Sydney Kaschalk (21) tips a shot past Thomas Jefferson’s Natasha Yanief (3) during the first set of Tuesday’s PIAA Class 3A first round match. Kaschalk finished with a team-high five kills along with three blocks in a three-set loss.

DuBois’ Cayla Donahue (12) sends a shot over Thomas Jefferson’s Abigail Chalovich (8) during the opening set of Tuesday’s PIAA Class 3 first round match. Donahue had four kills for the Lady Beavers who saw their season come to an end with a sweep.

KNOX — DuBois saw yet another strong season come to an end in the opening round of the PIAA Class 3A playoffs as it was swept 25-14, 25-10, 25-17 by Thomas Jefferson at Keystone High School Tuesday.

The Lady Beavers (18-2), coming off their third straight District 9 title, suffered a three-set loss to the Lady Jaguars for the second year in a row.

Thomas Jefferson, the WPIAL (District 7) runner-up, set the tone early as it never trailed throughout the match that saw just one tie at 1-1 in the early going of the third set.

“I think maybe the nerves or something got to us in game one, I knew from the warmup we just didn’t have the energy that we’ve had and we were nowhere near where we were on Saturday (District title match),” DuBois head coach Jason Gustafson said.

The Lady Jaguars’ most dominant portion of the match came between the end of the first set and the start of the second, as they closed the opening set on a 8-1 run before starting the second with a 14-1 stretch.

Tanner Patrick got the match started with a four-point run at the service line for Thomas Jefferson behind back-to-back aces followed by a kill from Ashleigh Hanes before the Lady Beavers got their first point of the match on a block from Sydney Kaschalk.

The Lady Jaguars eventually took a 9-3 advantage before a kill from Cayla Donahue swung the service back to DuBois’ side of the court and Hannah Ray.

Ray was then able to win back-to-back points helped by a Donahue kill to get the Lady Beavers back within three at 9-6.

DuBois would not come any closer the remainder of the set, as a kill by Taylor Smith cut the deficit to 17-13 before the Lady Jaguars ran away with the set.

After Smith’s kill, Thomas Jefferson got a kill from Lillian Rockwell and a pair of service points from Abigail Chalovich as it began to run away with the set.

Julia Palmer finished off the 25-14 set win with a four-point service run helped along by an ace and a kill by Hanes, as Tyler Turk had a block and finished things off with a kill.

The Lady Jaguars then carried the momentum of a strong end to the opening set into a dominant start to the second set as a pair of lengthy service runs led it to a 14-1 lead to open the set.

Turk came up with a kill on the opening point on a DuBois service, before taking to the line and winning six straight points before a block from Smith gave the Lady Beavers their first point of the set.

A service fault by DuBois then sent Catherine Galioto to the line, as she secured a six-point run to push the WPIAL representatives out to a 14-1 lead.

Another service into the net by the Lady Beavers later gave Thomas Jefferson set point at 25-10 as it took a commanding 2-0 set advantage.

Leah Colville came up with a kill for DuBois to even the third set at one before the Lady Jaguars went on a 7-1 run to begin to pull away.

Galioto, Chalovich and Turk all came up with three-point service runs for Thomas Jefferson, as a pair of service points for Golioto late in the match on kills by Natasha Yanief gave the Lady Jaguars match-point at 24-13.

After a side out, the Lady Beavers got a three-point run by Alayna Cornelius to keep them alive temporarily as the run included an ace and a block by Kaschalk.

On the ensuing service a side out gave Thomas Jefferson a 25-17 win to finish off the three-set victory and send it to the next round.

The match was the final one for DuBois nine seniors, many of whom played key roles in the team’s run of three straight district crowns.

“It’s an awesome group,” Gustafson said of his seniors. “These girls, quite a few of them have been playing varsity since they were sophomores and they might have only lost seven or eight matches in their whole career.”

“Number one hey mean a ton to the team and number two it’s going to be really hard to replace them, they’ve left a lot for the younger girls to look up to in terms of work ethic and just love of the game.”

MEETING NOTICE “The May monthly meeting of the Reynoldsville Water