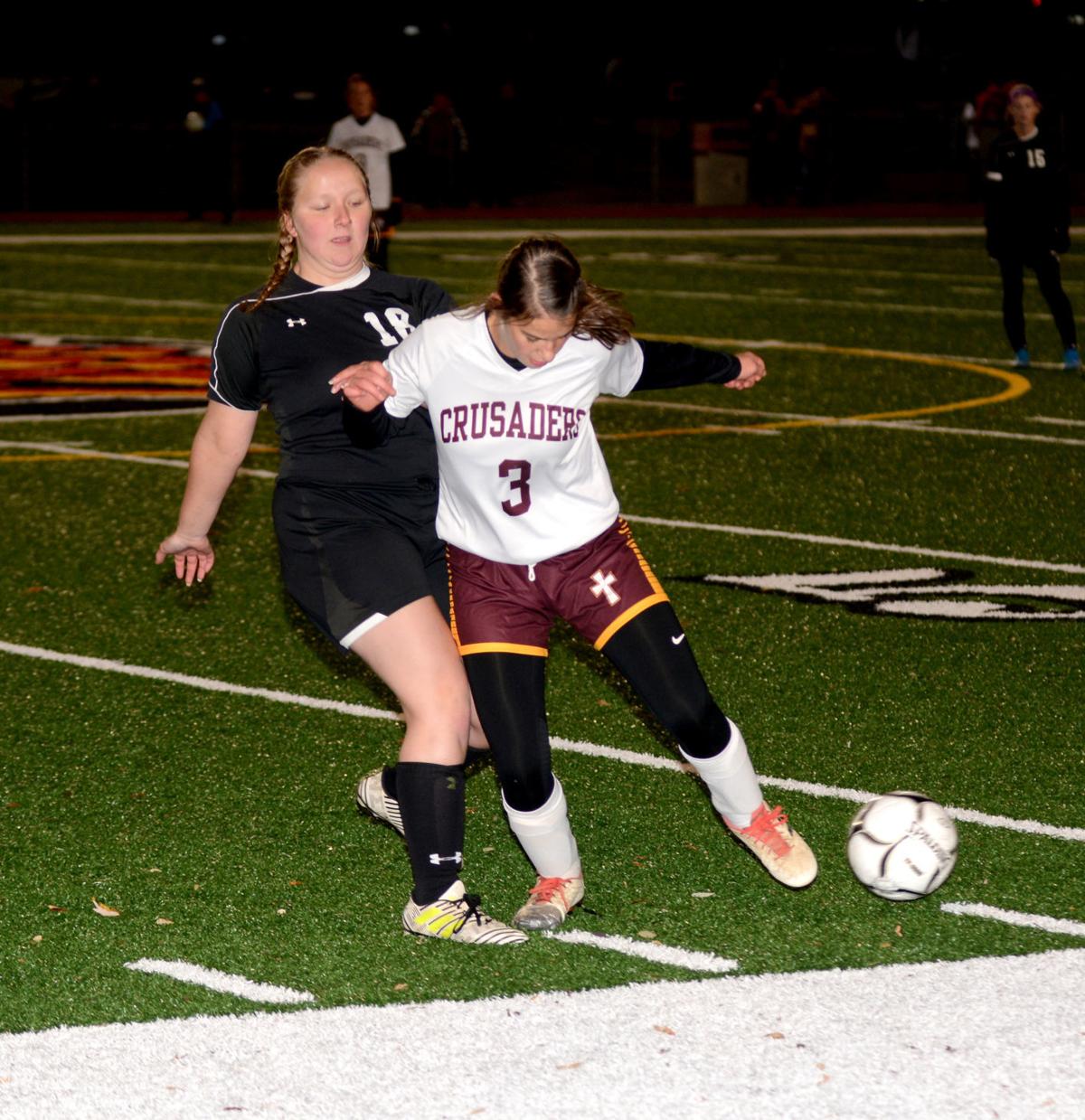 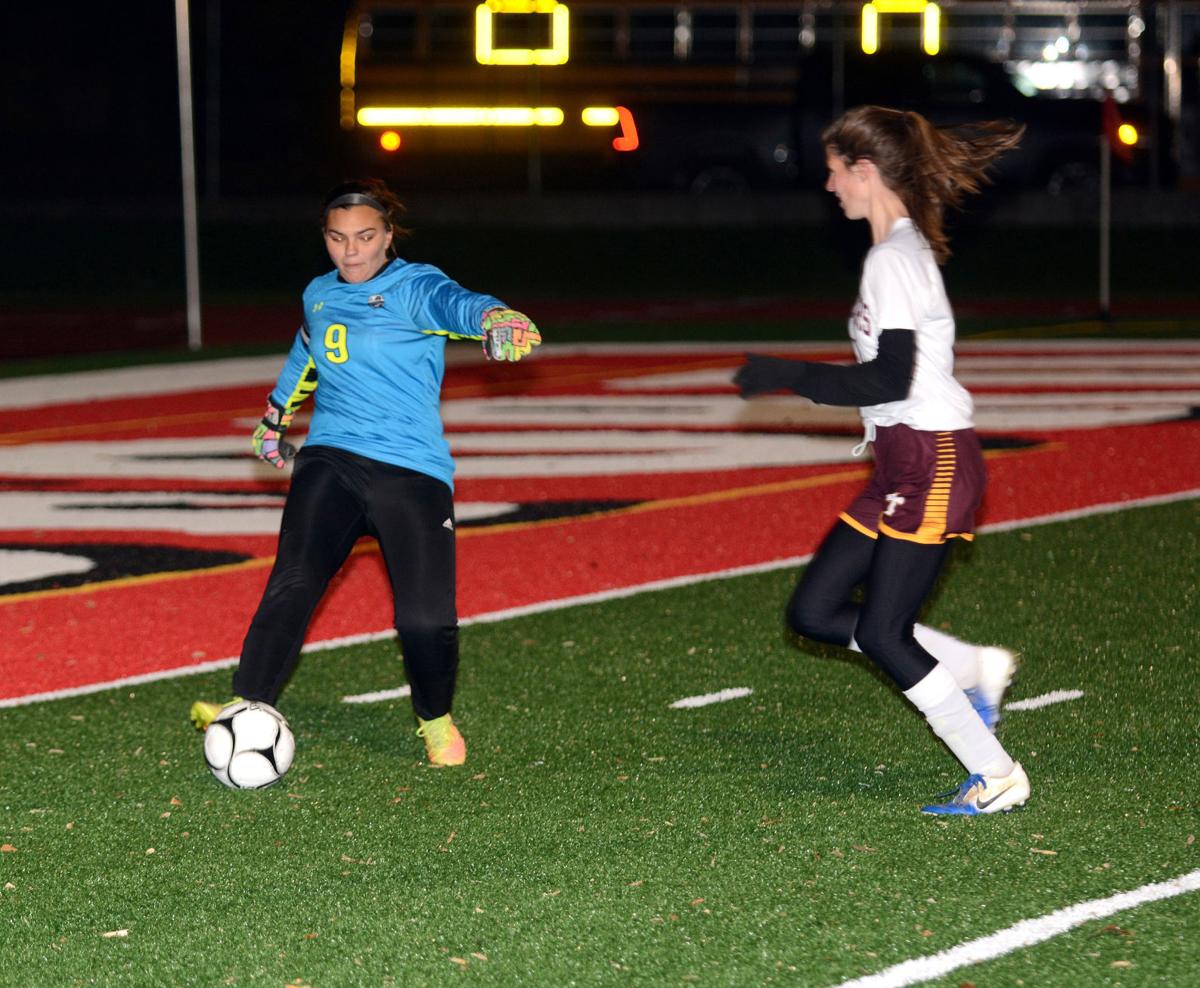 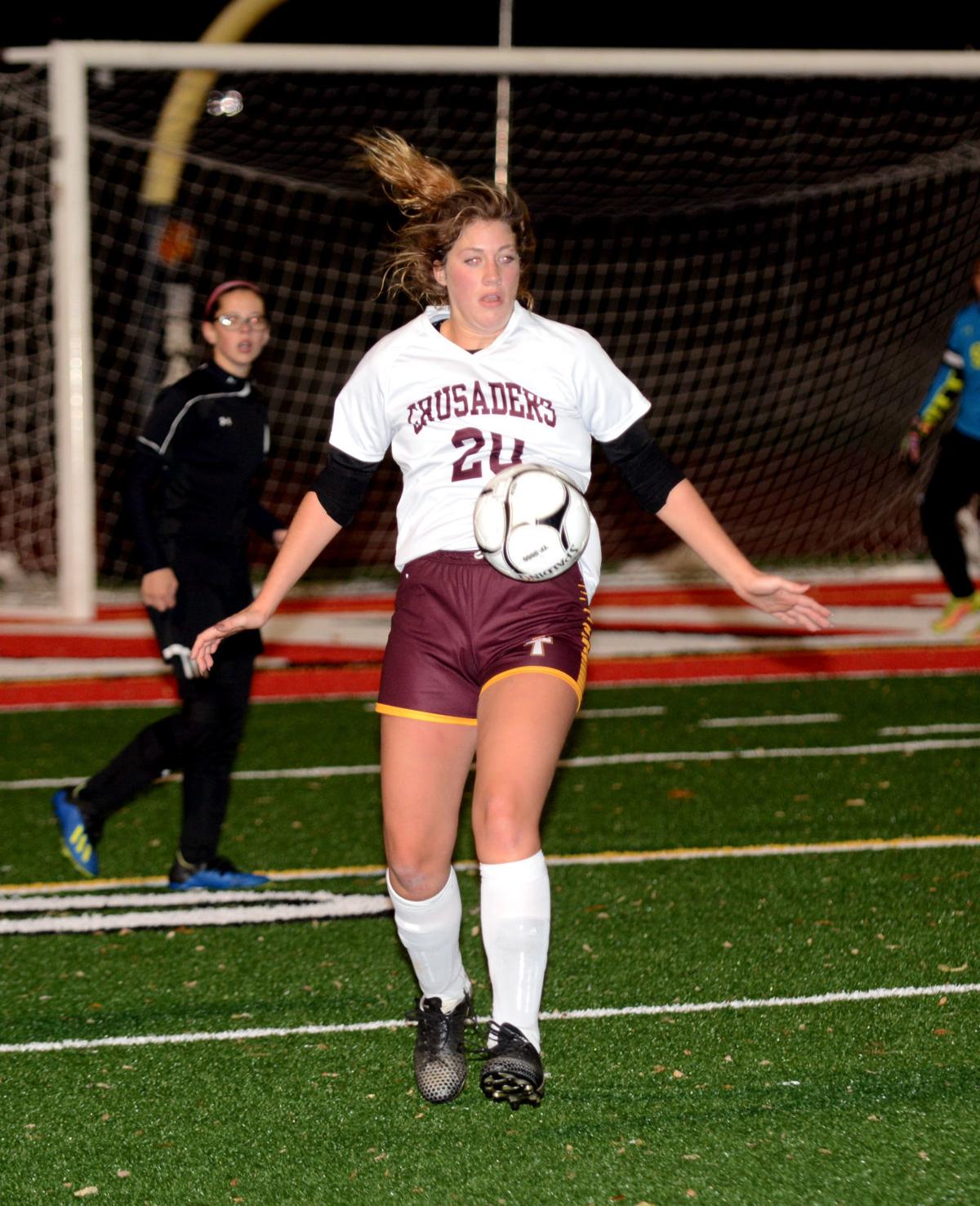 Elk County Catholic's Julia Toncich (20) tries to settle a pass during first-half action Saturday nigh in the District 9 Class A title game.

Elk County Catholic's Julia Toncich (20) tries to settle a pass during first-half action Saturday nigh in the District 9 Class A title game.

BRADFORD — Slow starts have plagued the Brockway girls soccer team all season, and Saturday night was no different against Elk County Catholic in the District 9 Class A title game at Bradford’s Parkway Field.

But, as they have all season, the Lady Rovers turned it on when needed to come away with a convincing 5-0 victory to capture their second straight district title. The win also completed the second straight sweep of the D-9 Class A soccer titles for Brockway, as the girls watched the boys squad blank Coudersport, 3-0, in the opening game of the night.

Things weren’t easy for the top-seeded Lady Rovers at the start, as a scrappy ECC squad (No. 7 seed) held Brockway scoreless through the first 16 minutes. Senior Chanell Britten finally broke the ice for Brockway when she scored on a rebound off her own shot in the 17th minute.

That’s all the Lady Rovers could muster through 27 minutes, but things quickly changed from there as junior Morgan Lindemuth scored twice in a span of 2:17 to change the complexion of the game and make it 3-0 before things hit the 30-minute mark.

Brockway (16-1) took that 3-0 lead into the break, then saw Britten score twice in the first nine minutes of the second half to all but put things away with 31:06 left to play. Britten’s hat-trick pushed her season goal total to 50 and 164 in her standout career.

Brockway pulled most of its starters shortly thereafter before putting its seniors back on the field for the closing moments. Those final 31 minutes were played largely between the 18s with the teams combining for just a couple shots.

“Winning another district title is really nice, especially with the group of eight seniors,” said Lady Rovers coach Jessica Leadbetter. “I’ve been coaching them the past four years I’ve been here, and they were my first freshmen group. You really couldn’t ask for a better group of girls. They are hard workers and fun to coach. I have them in school and I have them on the field. They’re just fun to be around.”

Things opened as a battle in the midfield, as neither side mustered a shot in the opening 11 minutes. Elk County keeper Kara VanEerden and Overbeck then promptly traded saves on direct kicks by the opposition in the 12th and 13th minutes, respectively. VanEerden recorded 10 saves in her second start in net since replacing the injured Allison Geci.

VanEerden then turned away a shot by Botwright in the 14th minute before stuffing Britten on a point-blank shot a minute later as she rushed out to make the challenge.

Brockway kept the pressure on VanEerden who made another save on Britten in the 17th minute, but she couldn’t secure the ball. The rebound came back to Britten, who didn’t miss a second time and buried a shot into the back of the net.

Britten nearly doubled the Lady Rover lead just over a minute later in a similar scenario. VanEerden again stopped an initial shot by the Lady Rover, only this time Britten’s rebound effort went wide of the right post.

Overbeck then made her second and final save of the half just past the midway point, while VanEerden recorded another stop in the 26th minute on a Decker shot from the left side.

Decker then made a huge impact on the game as she assisted on both of Lindemuth’s goals that made it 3-0 with 10:33 left in the half. Lindemuth redirected in a Decker pass for her first goal in the 28th minute, then slammed home a rebound shot for the second after VanEerden made an initial save on a Decker shot.

The Lady Rovers took that 3-0 advantage to the break, then came strong to start the second half with Britten’s two goals putting the game on ice with just over 31 minutes to play.

Elk County’s lone shot on goal in the second half came from Rylie Belsole in the 50th minute and was stopped by Overbeck.

“We definitely have a thing with starting slow and did again tonight,” said Leadbetter. “But, once we get that first goal and then a quick second goal, they usually fall right into place after that and the momentum really gets going.”

As for ECC coach Ken Vogt Jr., he was proud of his team’s effort — not only in the title game but during its run to the finals as the No. 7 seed. That journey featured upset wins against second-seeded Forest Area (5-2) and third-seeded Redbank Valley (5-1). The Lady Crusaders finished with a 7-12 record.

“Being the underdog is tough. You know coming in it’s going to be a hard-fought game, and you don’t know how the girls are going to react — especially with a young team,” said Vogt. “But, I was proud. They played well and played hard and kept going. They were still into it at the end of the game, which is nice.

“Hopefully, they can keep that and we can get back here next year. This was my first D-9 title game experience (as coach), and it was kind of neat to get here as a seven seed.”

Next up for the Lady Rovers is first round state playoff matchup with District 7 runner-up Greensburg Central Catholic Tuesday at Clearfield High School at 6 p.m. The two schools met two years ago when Brockway made states as the D-9 runner-up and GCC was the WPIAL champ, and the Lady Centurions came away with a close 3-2 victory.

“Their big goal is to win a game at states,” said Leadbetter. “Every year we’ve come back they wanted that D-9 title, but every year since they (seniors) have been freshmen they have wanted to go one step farther and win that first state game. That will be a big deal (Tuesday).”