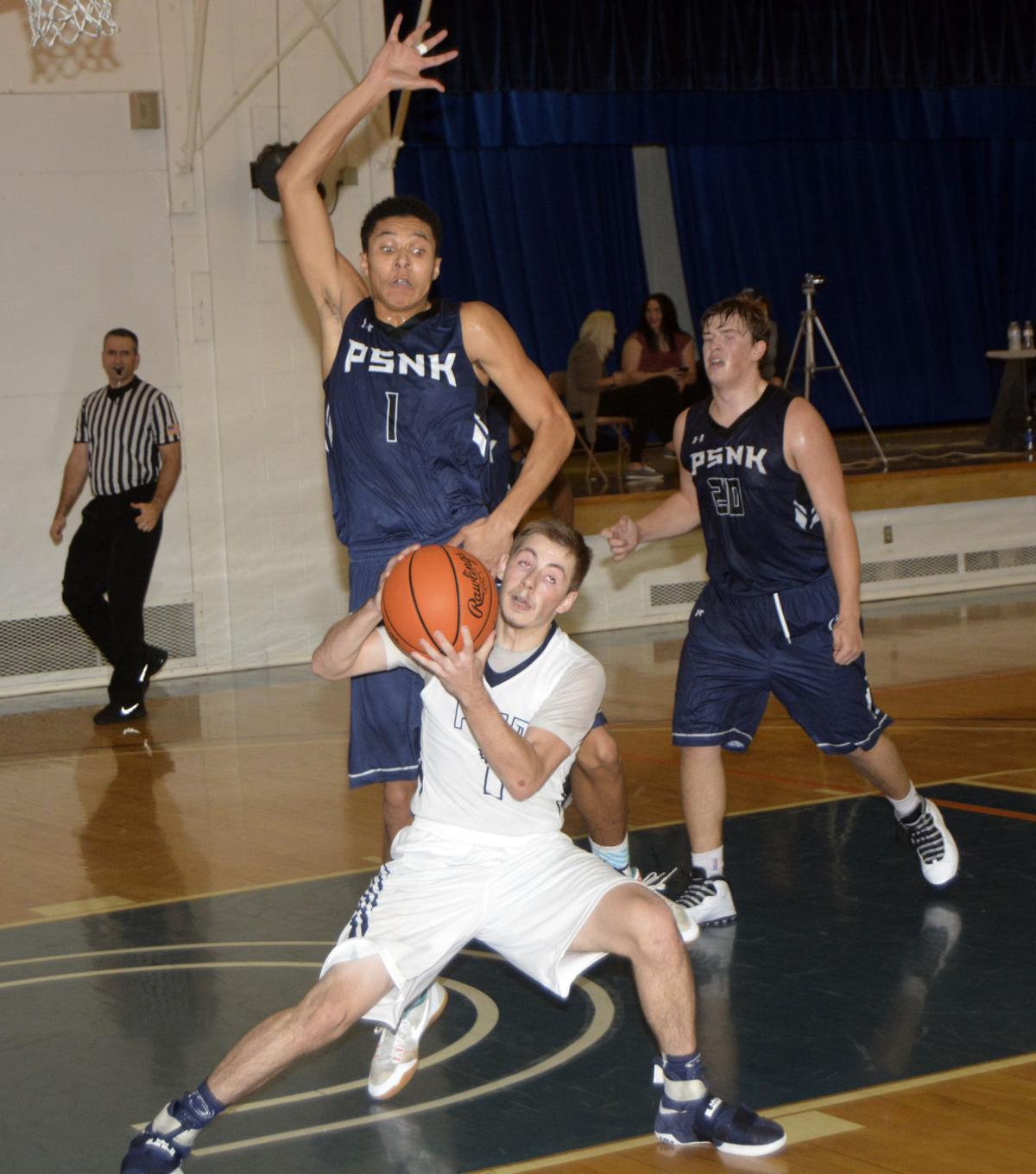 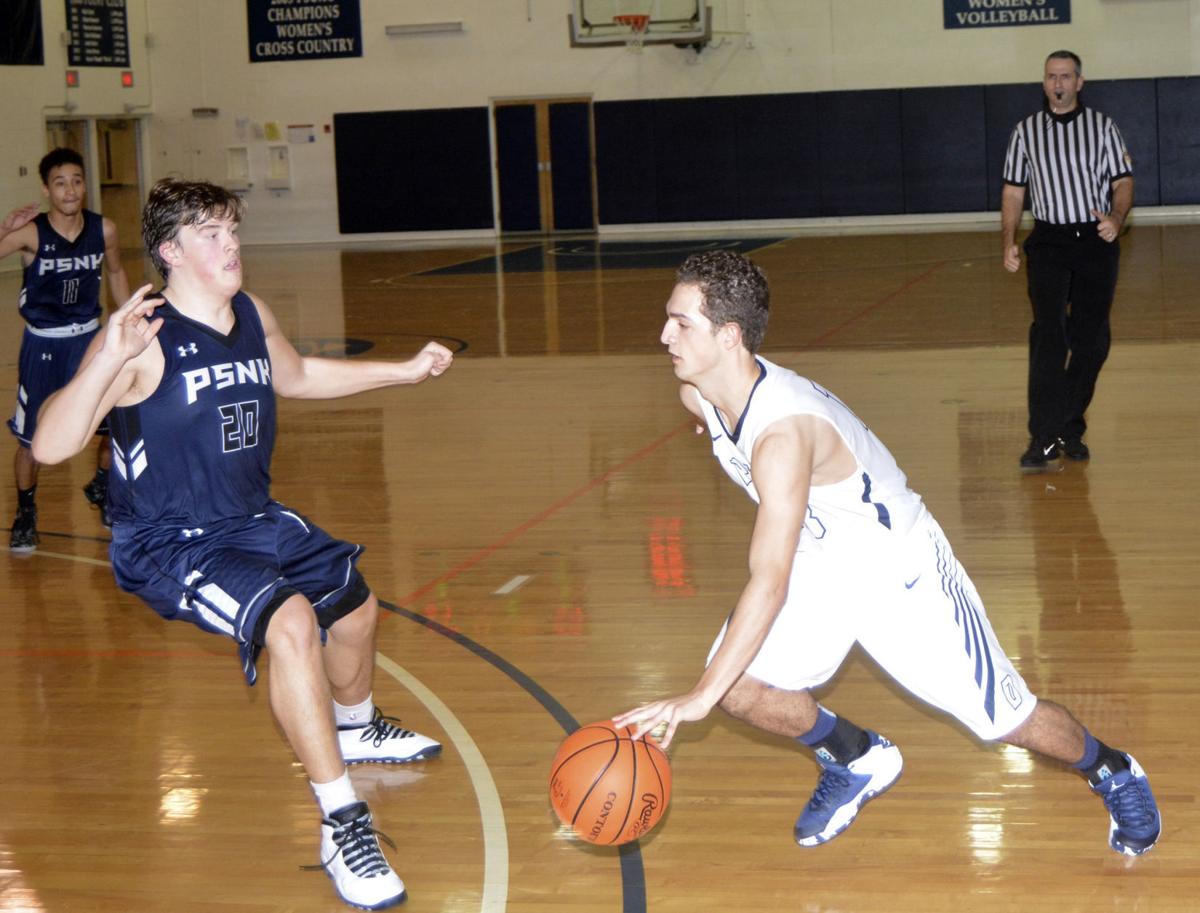 Penn State DuBois’ Dane Aucker (right) drives to the hole as New Kensington’s Shane Baronner (20) defends. Aucker had 19 points off the bench to help DuBois to a 97-82 win. 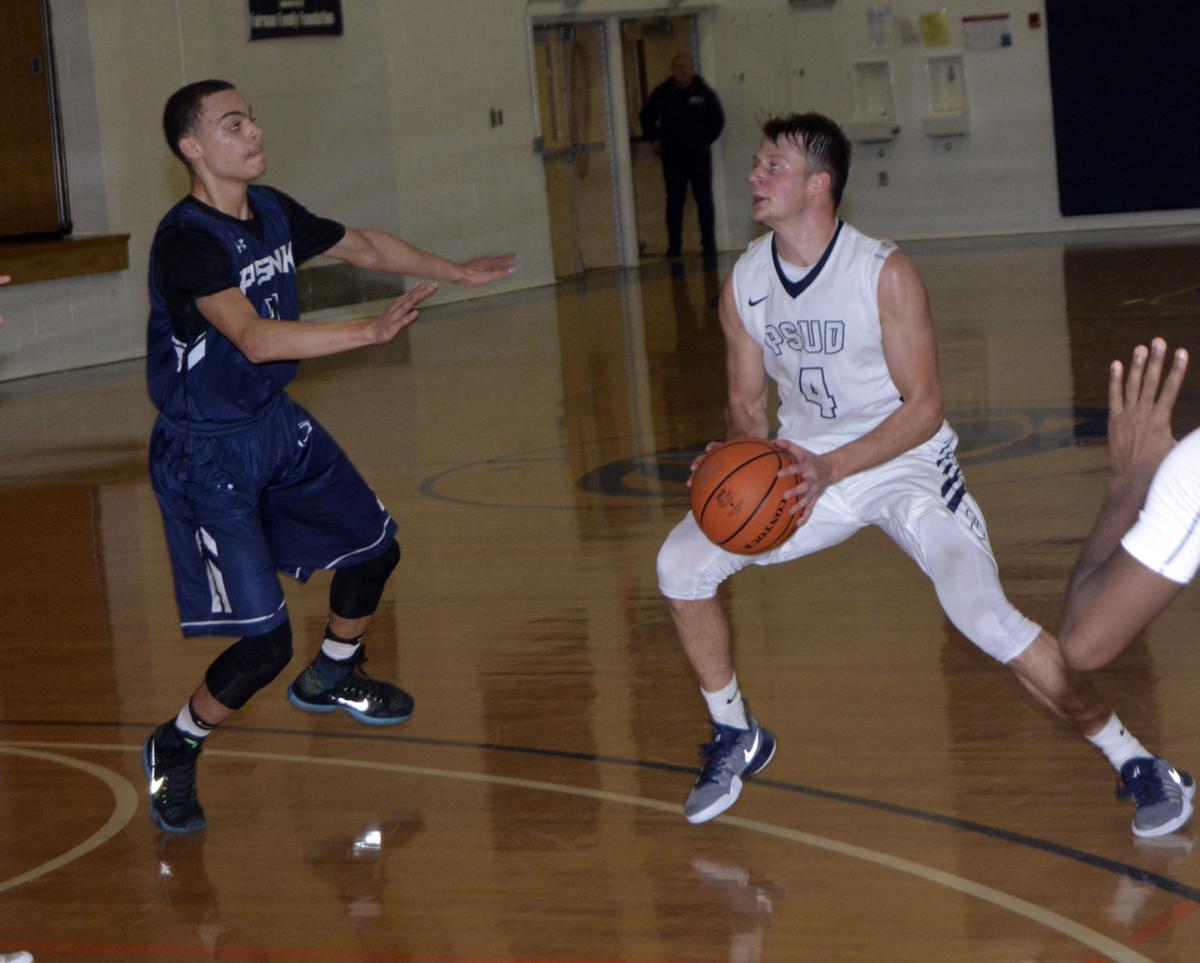 Penn State DuBois’ Dane Aucker (right) drives to the hole as New Kensington’s Shane Baronner (20) defends. Aucker had 19 points off the bench to help DuBois to a 97-82 win.

The first half saw 14 lead changes between the two teams to go with a few more ties in a back-and-forth slugfest in the first 20 minutes.

New Kensington took an early lead, but never led by more than five points at any time. They had leads at 7-2 and 16-11 before PSUD got themselves going around the 14-minute mark of the first half.

Tristan Pierce collected a defensive rebound at one end and raced the other way for a layup and a foul and converted a three-point play early in the first half.

Dane Aucker (DuBois Central Catholic) gave DuBois its first lead on a straight-away three-pointer at the 12:10 mark, giving his team a 20-18 lead.

On PSU DuBois’ next possession, Pierce drilled a three-pointer and again was fouled on the way up. He made the ensuing free throw to give DuBois a 24-20 lead.

New Kensington then went on a 7-0 run in the next two minutes, but Penn State DuBois took the lead once again with about five minutes to play in the first half on a Pierce trey.

The two teams went basket-for-basket down the final stretch of the first half with six lead changes in the final four minutes.

With the game tied at 50 apiece, Aucker hit a three-pointer with a minute to go, which gave PSU DuBois the advantage for good. New Kensington’s Jordan Williams and Kenneth Rouse hit a free throw each in the final minute, but DuBois went to the locker room up 53-52.

The game remained tight throughout much of the second half as DuBois held just a four-point lead with 12 minutes to play.

Up 72-69 under the 10-minute mark, Aucker made a layup, while Pierce hit a jumper to create some breathing room for the home team.

Rouse responded with a three-pointer to cut New Kensington’s deficit back to four with 7:42 to play.

DuBois extended its lead to 10 a couple minutes later on a pair of big three-pointers from Jesse Reynolds (Ridgway) and Pierce to give PSUD an 84-74 lead.

Penn State DuBois had a couple kids in foul trouble in Sam Roselli (Ridgway) and Logan Pearce. Both fouled out with a couple minutes remaining in the game, as New Kensington got into the double bonus with 4:50 to play in the game.

Despite that, DuBois kept the visitors off the foul line for most of the rest of the way.

New Kensington trailed by as little as eight points with just over two minutes to play at 87-79, but DuBois finished the game on a 10-3 run to finish out the win. Jacob Perrin (Brockway), Donovan Boyd and Pierce all hit free throws down the stretch.

Pierce led the way with 32 points on the night on 11-for-20 shooting and 4-for-9 from long distance. He also pulled down seven rebounds.

Aucker scored 19 points off the bench in 22 minutes, while Reynolds ended the night with a double-double with 12 points and 10 rebounds.

Despite getting to the line 34 points, New Kensington only sunk half of them. They also were just 5-for-24 from behind the arc.

Penn State DuBois, which improved to 4-2 on the season, hosts a pair of PSUAC games this weekend. The Lions begin on Friday evening against Penn State Mont Alto at 8 p.m. before entertaining Penn State York on Saturday afternoon at 3 p.m.