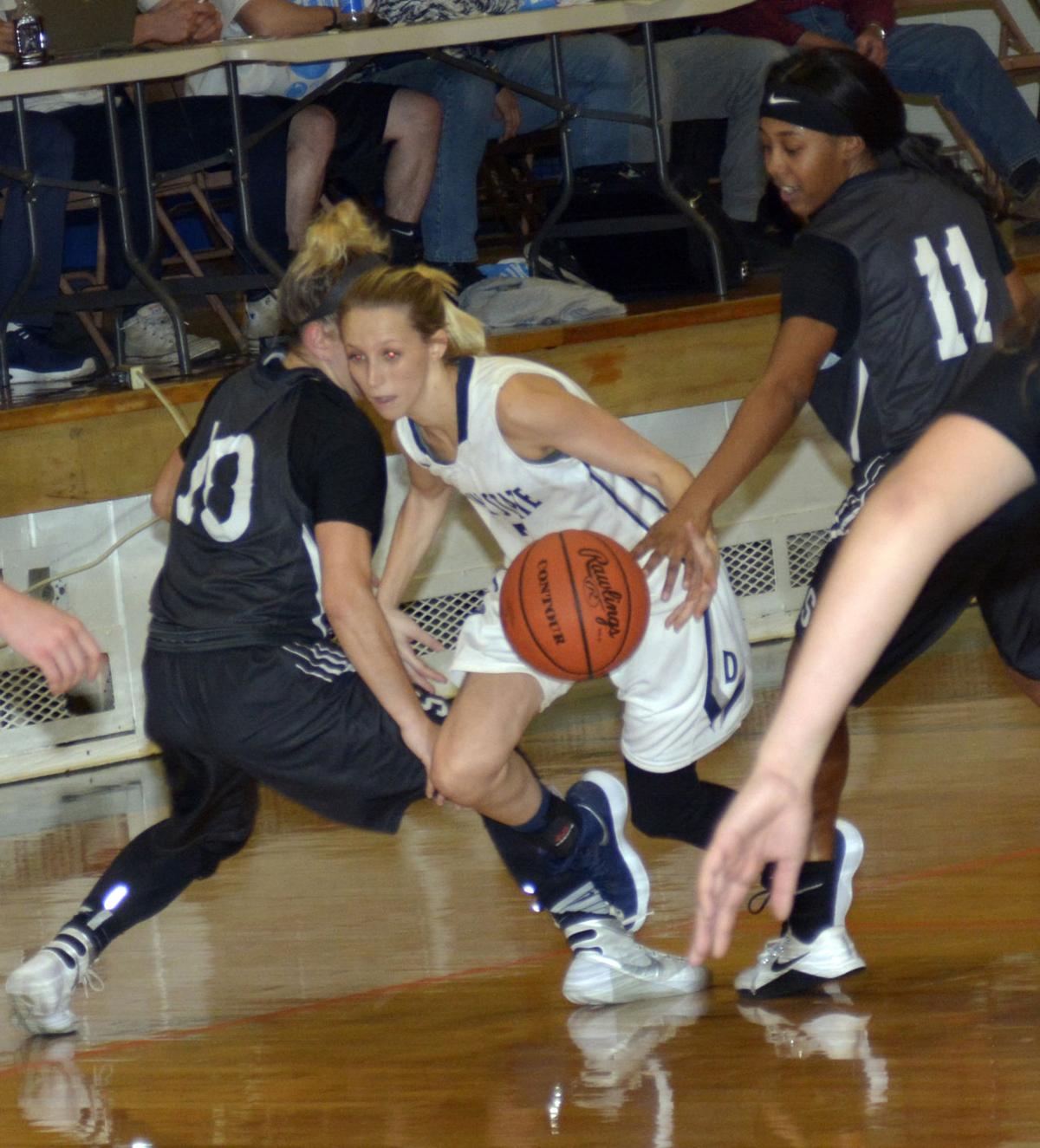 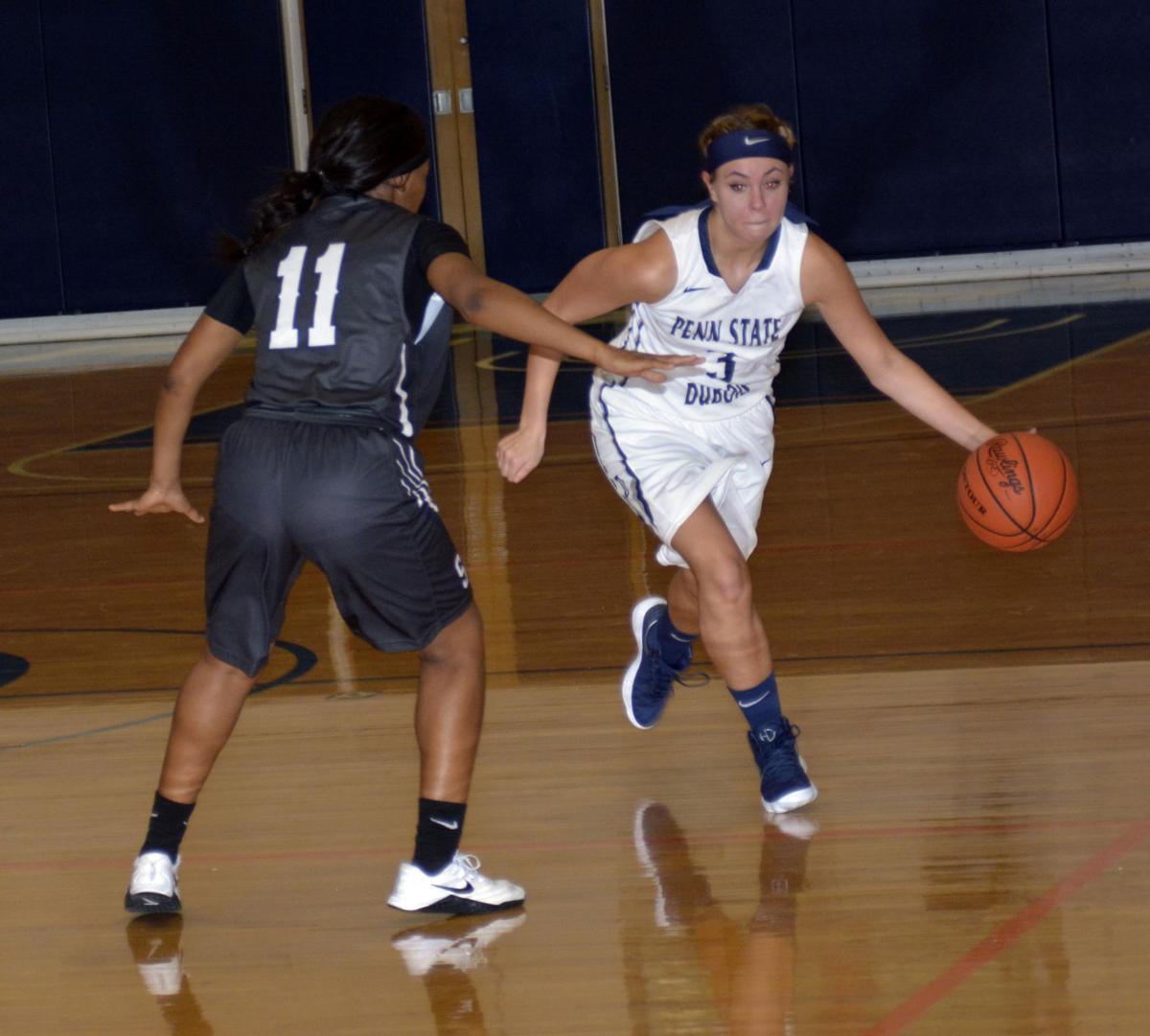 Penn State DuBois' Cierra O'Shell (3) dribbles up the floor as Beaver's Diamond Thomas (11) defends. O'Shell had 16 points on the night, including three three-pointers in DuBois' 70-61 win. 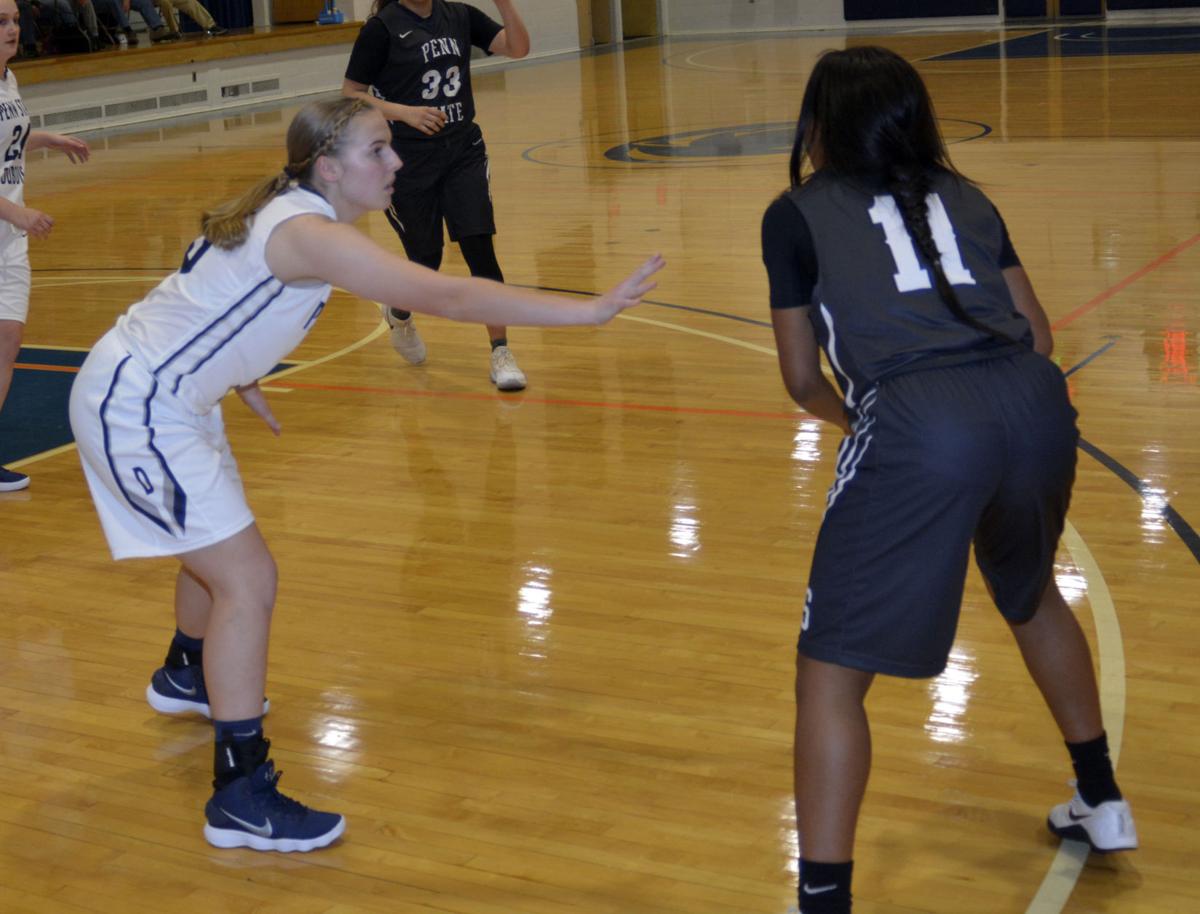 Penn State DuBois' Cierra O'Shell (3) dribbles up the floor as Beaver's Diamond Thomas (11) defends. O'Shell had 16 points on the night, including three three-pointers in DuBois' 70-61 win.

DuBOIS — The Penn State DuBois womens basketball team continued its strong start to the season on Tuesday evening, finishing the night with a 70-61 over Penn State Beaver in the PSU DuBois Multipurpose Gymnasium.

The win, according to DuBois head coach Pat Lewis, was the program’s first over Penn State Beaver in school history. In Lewis’ 10 years at the helm at PSUD, he believed Beaver had been to the national tournament nine times.

DuBois went to the locker room trailing 30-29 at halftime, but took the lead for good in the last minute of the third quarter and never looked back from there.

“This is a great win,” said Lewis. “I thought we played exceptionally well. We had a lot of turnovers, but that’s kind of our Achilles’ heel in some ways.

“We’ve been a second half team all season long. I play a lot of kids. I do a lot of hockey style subbing. A lot of times, that will wear an opposing team out. We seem to gain strength as the game goes on. Five games ago, we were down by 25 to Pitt-Titusville in the second quarter, and we won by 10. We have an explosive offense, but we grind away.”

Neither team really separated themselves in the first half with neither side holding as big of a lead as more than five points.

Kristen Williams’ layup with a minute left in the first half gave her team a 29-28 lead, but Beaver’s Brittany Jackson’s putback off a rebound with five seconds left sent Beaver to the break up 30-29.

Part of the big difference in the second half came at the foul line, where Beaver struggled throughout the night. The visitors ended the night going 13 for 29 from the charity stripe, while DuBois was much more efficient at 22 for 27, good for an 81 percent night.

“We outscored them by nine from the foul line,” said Lewis. “That was the difference in the game.”

The second half started once again with a couple lead changes, and Beaver got its lead as high as five points, but DuBois took the lead by the end of the third quarter.

Gracie Hamilton hit a pair of free throws, while DuBois product Laura Fatula also had a bucket and a Melody Young putback in the last minute of the third quarter gave the home team a 45-44 with 10 minutes to play.

Williams started off the fourth quarter with a three-pointer from the top of the key, but Beaver worked the game back to a point with 7:47 to play.

Cierra O’Shell then hit a three of her own, while a Lauren Young layin got the DuBois lead to six points with 6:25 to play.

DuBois got the lead to as much as 12 points with three minutes left before coasting for the victory.

“We kept it reasonable, and the second half went exactly how I hoped it would go,” said Lewis.

“I honestly think we learned something from our (54-51) loss on Saturday against York. We were up by five points with two minutes to go. We didn’t take good care of the ball at the end. Tonight we did. We’re learning and we’re continually getting better.”

Williams and O’Shell each had 16 points to lead DuBois on the night.

For Beaver, Jackson had a double-double with 23 points and 12 rebounds.

“This is huge for us,” said Lewis. “Those girls don’t know that we lost to Beaver 10 years ago or eight years ago. They don’t know. They don’t care. What they do know is Beaver came into tonight at 3-0 in the conference, and they just beat a good team. It means the world to them because it gives them confidence. They now know that they can play with the best.”

DuBois will now host Penn State Greater Allegheny on Friday evening before going on a 10-day break before playing at Division II Clarion University on Dec. 18.