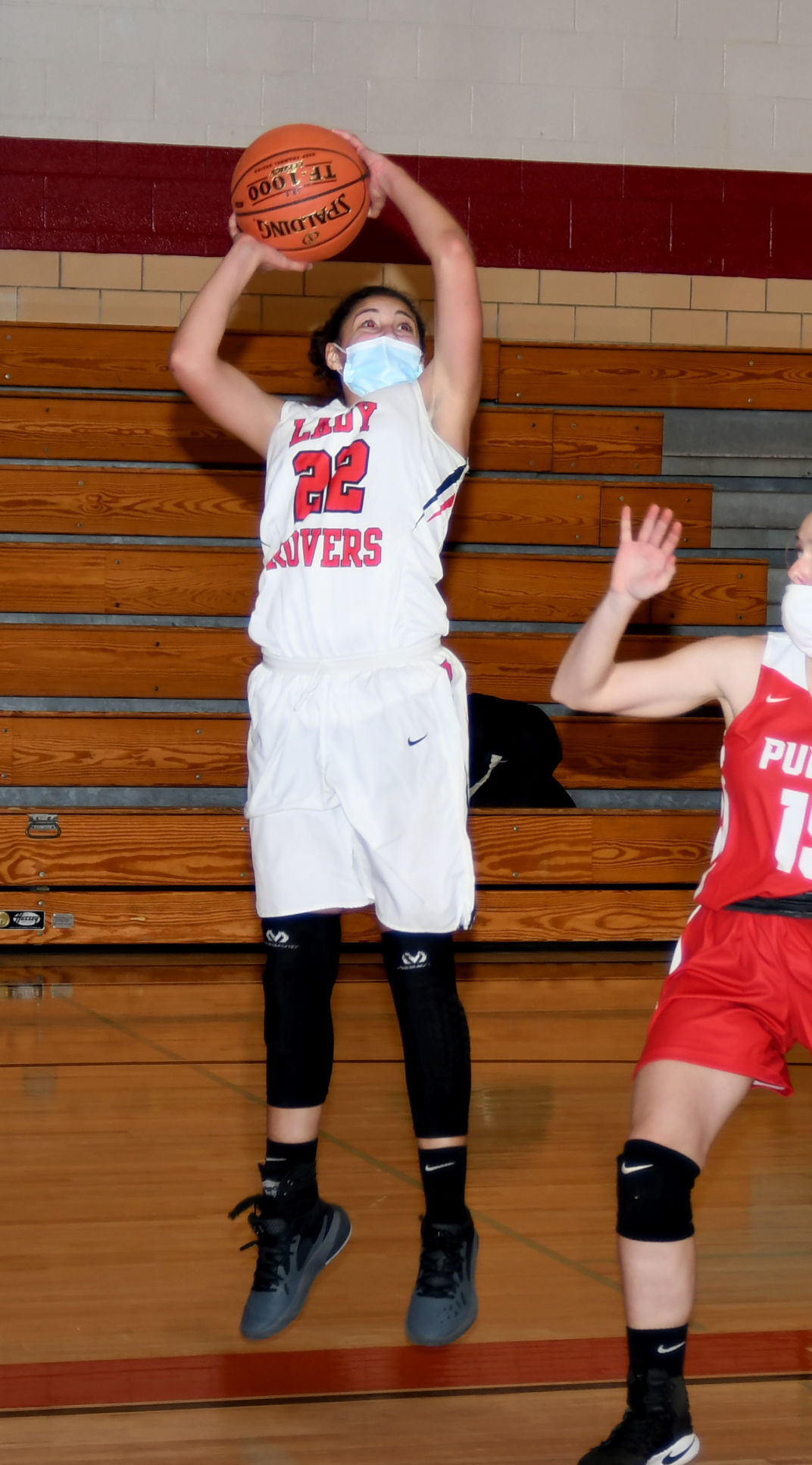 Brockway’s Nikki Baker (22) hits a jumper in the lane during third-quarter action Wednesday night against Punxsutawney. Baker had two points and five rebounds in a 61-16 loss to the Lady Chucks. 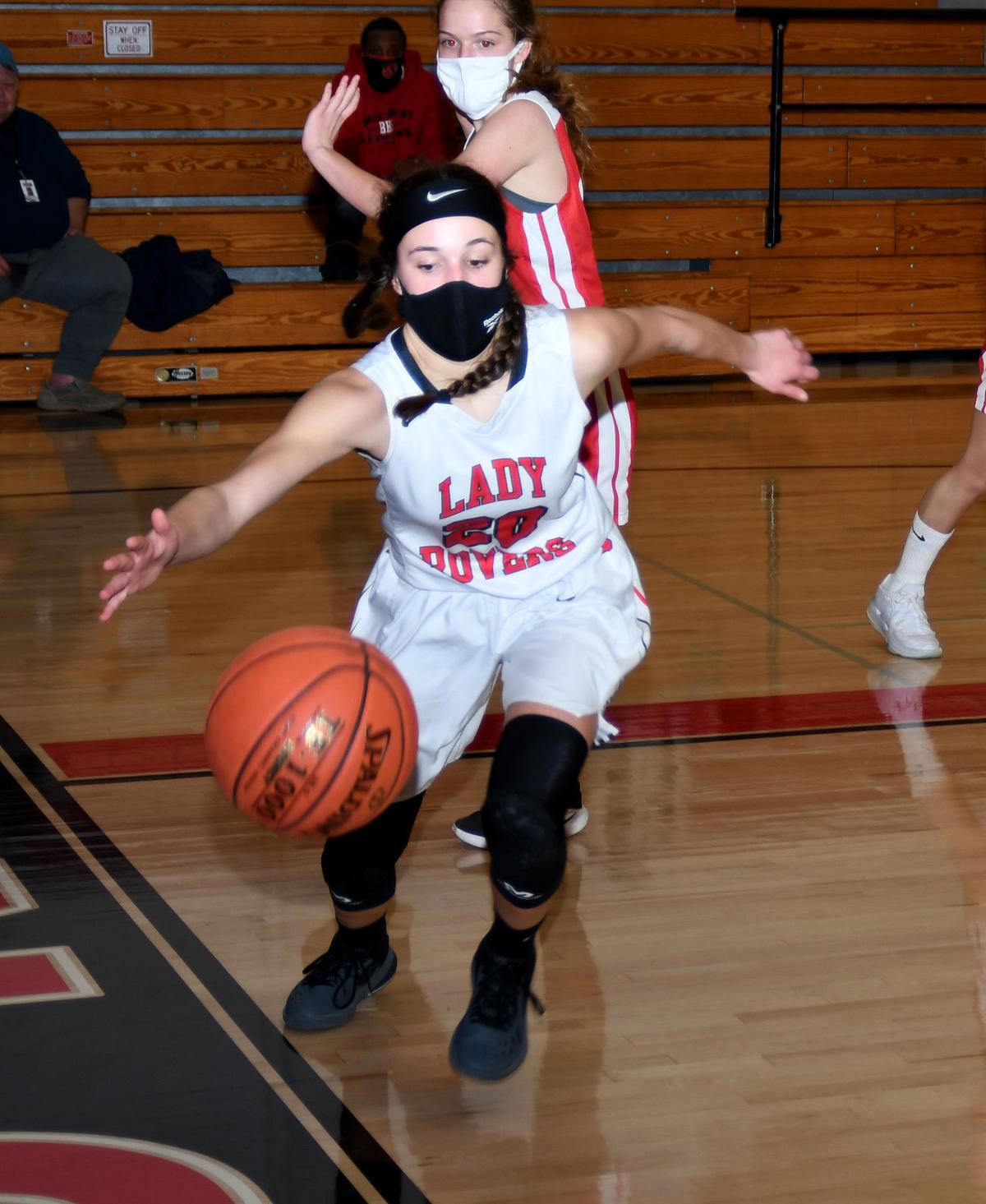 Brockway’s Madelyn Schmader (20) tries to keep the ball inbounds near the end line under her own basket during first-half action Wednesday night against Punxsutawney.

Brockway’s Nikki Baker (22) hits a jumper in the lane during third-quarter action Wednesday night against Punxsutawney. Baker had two points and five rebounds in a 61-16 loss to the Lady Chucks.

Brockway’s Madelyn Schmader (20) tries to keep the ball inbounds near the end line under her own basket during first-half action Wednesday night against Punxsutawney.

PUNXSUTAWNEY — For the second time in less than a week, the Punxsutawney girls basketball team used its speed and pressure defense to roll past an opponent from the Tri-County Area.

The Lady Chucks (3-0), who opened their season with a 67-18 victory at DuBois Central Catholic last Friday night, captured their second mercy-rule victory Wednesday night with a 61-16 win at Brockway.

The Lady Rovers (0-2), coming off a tough 33-32 loss at Karns City in its opener Monday, never got into a rhythm Wednesday — thanks in large part to Punxsy’s pressure defense at both the full court and half court levels.

Punxsy forced Brockway into 15 first-half turnovers, including 10 in the first quarter as its raced out to a 27-2 lead after the opening eight minutes. The Lady Rovers compounded their turnover problems by failing to make a first-half basket as the Lady Chucks took a commanding 40-5 lead into the break.

That put the mercy rule clock into effect to start the second half, with Punxsy outscoring Brockway 21-11 over the final two quarters. Punxsy limited the Lady Rovers to just four baskets in the game, with Brockway’s other eight points coming from the free throw line.

“They basically threw a blitz at us, and when you shoot 0-for-24 in the first half, you’ll never win a ball game,” said Brockway coach Dick Esposito. “We were out synch from the jump ball when she almost knocked it out of bounds all the way through the second half.

“And now, we’re starting to nurse minor injuries and had three kids sitting down a lot of the second half. We’re just hoping we can get through this little part of it.

“Punxsy has one heck of a program, though, and that may be the best team in the district. We do play one of the toughest schedules in District 9 for a AA school, and we just have to get use to the competition. We just need to learn to play together and start putting it together. Right now, we just need a win to get the confidence going.”

Punxsy’s Riley Presloid opened the game with five points in the opening minute, as she drained a 3-pointer and scored inside — both off Brockway turnovers. That opening sequence was a preview of things to come, as Punxsy used its defense to create easy baskets in transition.

Brockway’s lone first-quarter points came at the 5:25 mark on a pair of Danielle Wood free throws that made it 7-2 at the time. The Lady Chucks proceeded to end the quarter on a 20-0 run to build a 27-2 lead after one.

Selena Buttery finally ended Punxsy’s run with a pair of free throws herself in the opening minute of the second quarter, but it proved to be more of the same from there.

The Lady Chucks put together another 13-0 spurt before Buttery went 1 of 2 at the line with 41 seconds left before the half to make it 40-5. Punxsy led by that score at the break.

Buttery led Brockway with seven points to go along with 10 rebounds. She had two of her team’s four baskets in the game. Wood didn’t play the second half because of an ankle injury.

The pace of play slowed some in the second half with the clock running and Punxsy holding a commanding lead.

Brockway’s Ciara Morelli scored all four of her points in the final two quarters. Teammate Nikki Baker had two points and five rebounds.

Brockway is back in action Saturday at home against Sheffield at 1:30 p.m.