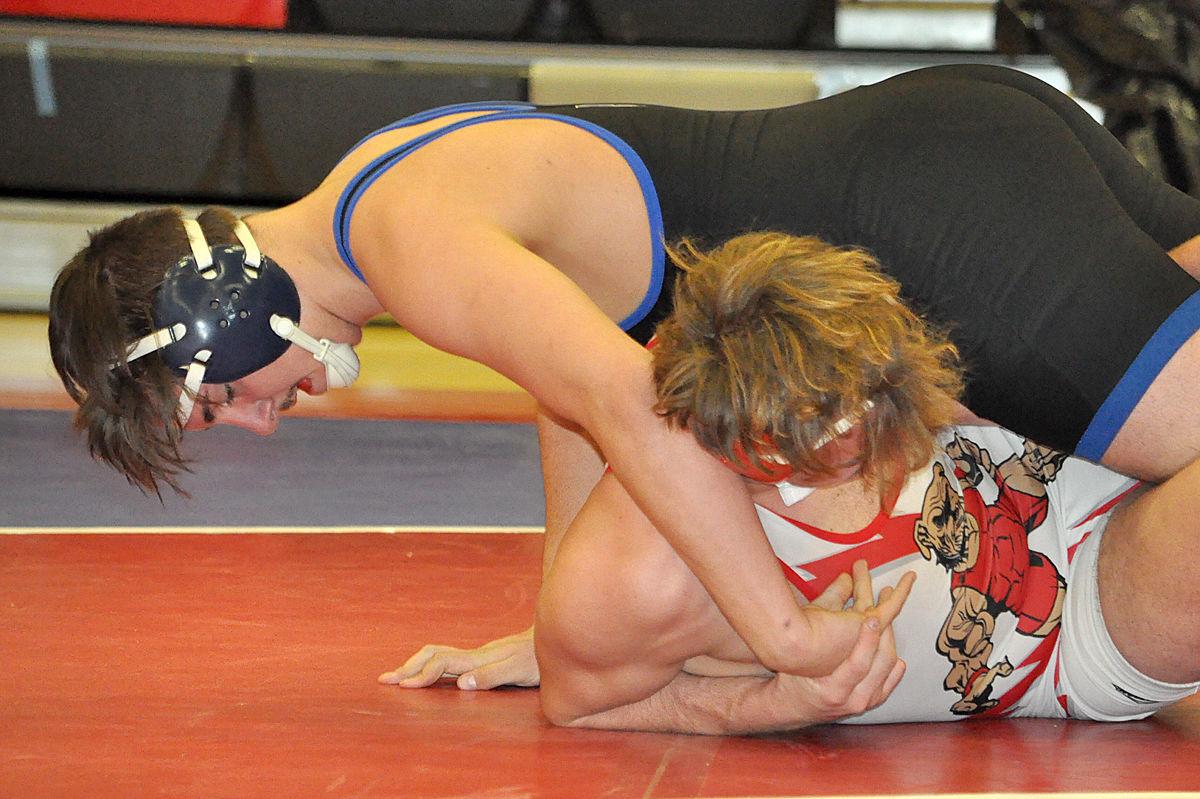 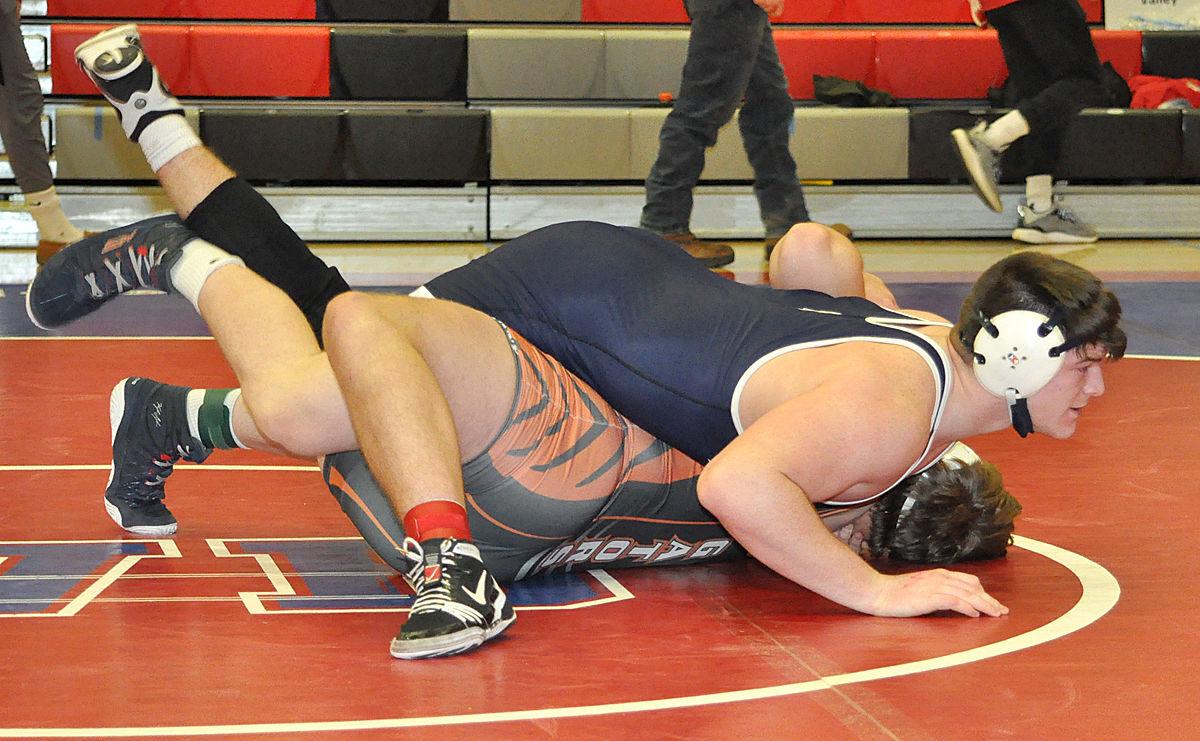 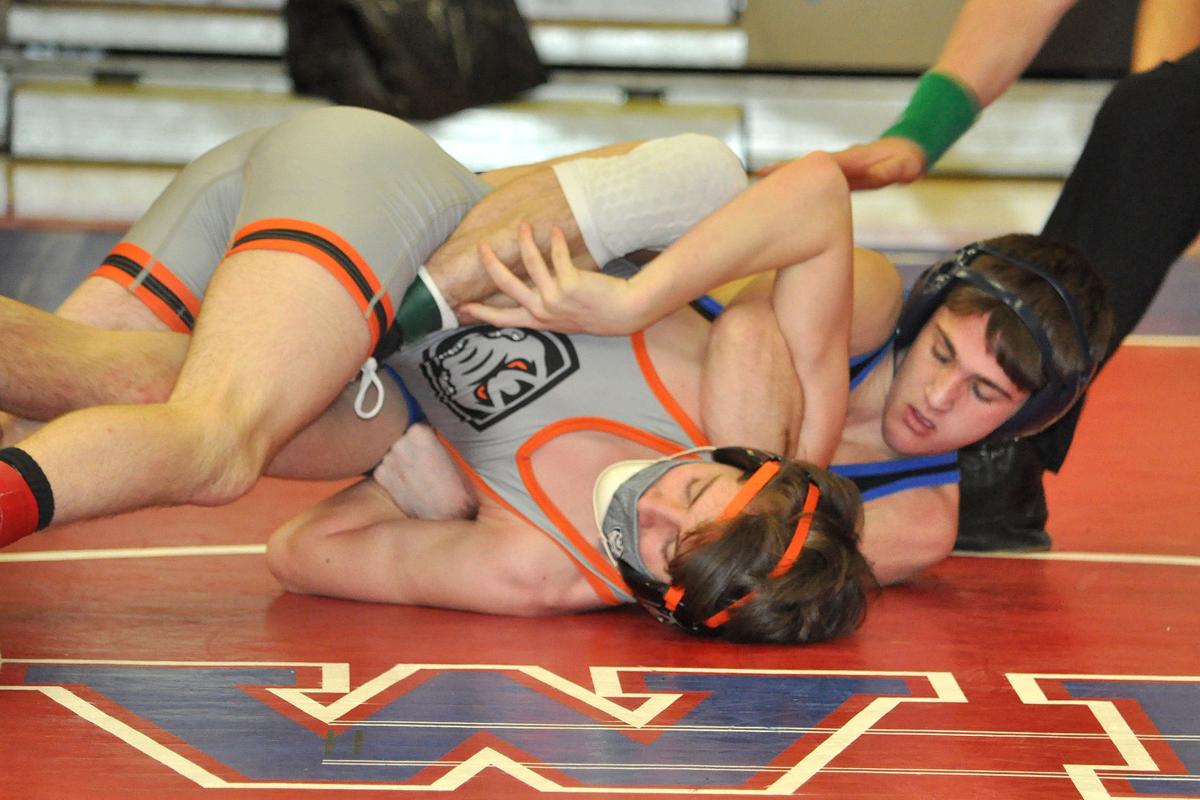 Brookville’s Owen Reinsel tilts Port Allegany’s Chase Weimer not long before pinning him in the first period of their 120-pound finals bout. It was Reinsel’s third district title.

Brookville’s Owen Reinsel tilts Port Allegany’s Chase Weimer not long before pinning him in the first period of their 120-pound finals bout. It was Reinsel’s third district title.

HYDE — While not dominating the field as they had in the previous eight title runs since 2011, the Brookville Raiders wrestled their way to a ninth team title in the past 11 years at Saturday’s District 9 Class AA Tournament held at Clearfield Area High School.

It took a top-three finish this year to advance in the adjusted postseason setup due to COVID-19 considerations. The regional bracket is just an eight-man setup per weight with five District 10 finishers combining with the top three from District 9.

From Sharon go the top four finishers at each of the 13 weights to the Western Super Regional scheduled for Indiana University of Pa. on March 6.

Brookville, the only one of the 13 teams with a full 13-man lineup, scored 174 team points, the second lowest total among their now 13 team championships with 2004’s incredibly balanced tournament needing just 129 points to win the team crown. Last year, the Raiders scored 221.5 points to win by 51.5 points over Brockway.

Saturday, the Raiders beat runner-up Port Allegany by just 20 points. Redbank Valley was third with 140.5 points and both the Gators and Bulldogs qualified one more wrestler, seven, for Sharon than the Raiders.

The finals and consolation finals were a mixed bag of results for the Raiders, who went 3-3 in the finals and 0-3 in the third-place matches with the winner getting a ride to Sharon. Junior Owen Reinsel won his third D9 title, plowing his way to the 120-pound crown. Senior Nathan Taylor won his second title, his first at heavyweight in dominating style as well while junior Bryce Rafferty won the 215-pound crown in his first year as a starter.

That’s a D9-record 34 straight years with a champion for the Raiders, who increased their D9 title list to 121, the most among Class AA schools and it’s 48 since the program began its dominating run back in 2011. Only Ridgway, Curwensville, Redbank Valley and Brockway have more than that in their entire history. Kane has 45.

Finishing second and headed to Sharon are senior Cayden Walter at 106, senior Wyatt Griffin at 160 and sophomore Jackson Zimmerman at 172. Losing bids for third with losses in the consolation finals were freshman Jared Popson at 113, and sophomores Brecken Cieleski and Coyha Brown at 132 and 152.

“I stressed all week to the kids that the tournament will be won by guys who come back through the wrestlebacks,” said Raiders head coach Dave Klepfer, who won his 10th Lenny Ferraro Memorial Coach of the Year Award in the past 13 years. “It usually is, but it was a team effort. Every one of our kids picked up wins, picked up pins throughout the day and those are the difference. Bonus points are the difference in tournaments and that was the case this weekend.

“We had a lot of guys who understood the situation and went out and got it done today.”

Reinsel, ranked No. 4 in the state by papowerwrestling.com, breezed to his third D9 title with three straight pins at 120 — Michael Stanley of Cranberry in 47 seconds, Cole Norlin of Johnsonburg in 48 seconds and No. 6 seed Chase Weimer of Port Allegany in 1:24 in the final.

Taylor, ranked No. 2 in the state after finishing fourth at 215 last year, also plowed his way to his second D9 title with three straight pins — Clarion’s Kaoz Baker in 57 seconds, Ridgway’s Jacob Kunselman in 1:38 and Port Allegany’s No. 3 seed Justin Young in 2:55 in the final. Taylor beat Young 9-2 in last year’s 215-pound final.

“Nathan, like Owen, are on that mission and this was just phase one and they have three more weekends and they both plan on being in the same spot the next few weeks,” Klepfer said.

Rafferty, a first-year starter at 215, was seeded second and pinned his way to the final with a first-period fall against Cameron County’s Eden Condon and a second-period pin of Port Allegany’s Derek Kallenborn.

Against top-seeded Aiden Gardner of Redbank Valley, Rafferty built a 5-1 lead going into the third period with a pair of takedowns and an escape. Gardner escaped and took Rafferty down 17 seconds into the third, but Rafferty escaped and countered a Gardner shot into a title-clinching takedown to set the 8-4 final.

“Bryce is hard to score on, he’s long and creates a lot of leverage on people and he’s just saavy,” Klepfer said. “We knew it was a toss-up match coming in, but he wanted this match pretty bad and we had some talks and he felt it was his time to step in there and come away as a district champ.”

Walter went into the weekend ranked No. 2 at 106, but was stopped cold in his attempt at a third D9 title by Brockway freshman Weston Pisarchick, who was seeded No. 3 but was the only other wrestler in the weight class ranked in the state at No. 24.

Pisarchick took down Walter in the first period with Walter escaping, rode Walter out the entire second period and escaped in the third to go up 3-0. He then took Walter down in the waning seconds to set the final. The win earned Pisarchick the tournament’s outstanding wrestler award.

Griffin, the No. 2 seed at 160, pinned his way to the finals with falls against Ridgway’s Jonathan Hinton and Meadville’s Landon Mead, but injured his knee in the Mead bout and Klepfer felt that it was enough to injury default to Johnsonburg’s top-seeded Cole Casilio in the final. Klepfer expects Griffin to be in the lineup at Sharon.

At 172, Zimmerman reached the finals as the No. 2 seed with two pins against Curwensville’s Dylan Harmic and Clarion’s Cutter Boggess before meeting Brockway’s No. 7-ranked Noah Bash.

Zimmerman, ranked No. 22, had dropped a 5-3 decision to Bash during the regular season but came out and grabbed the initial lead with a takedown and two-back points in the first period for a 4-0 advantage. Bash escaped with three seconds left in the period.

But Bash rode out Zimmerman in the second period, then reversed Zimmerman into a four-point move of his own early in the third period and rode Zimmerman out for the 5-4 decision.

Popson, Cieleski and Brown came up one win shy of regionals. Popson, seeded third, was blanked 7-0 by Redbank Valley’s Cole Bish in the 113-pound third-place match. Cieleski, seeded sixth at 132, appeared to have beaten the clock for a winning takedown against Johnsonburg’s Rayce Milliard in their third-place bout, but was ruled to be too late. Then in the overtime takedown period, Milliard scored a five-point move for a 7-2 win.

At 152, the fifth-seeded Brown lost his third-place bout in a 4-0 decision to Kane’s Luke Ely.

“We had a couple get away from us like always and I felt like we picked up a couple wins where we were the underdog, but I’m just proud of the team’s effort,” Klepfer summed up. “We preach the whole time it’s 13 guys helping to win this tournament. That’s why it worked out. Everybody got a win, even guys who didn’t place picked up some pins. That’s a good day.”