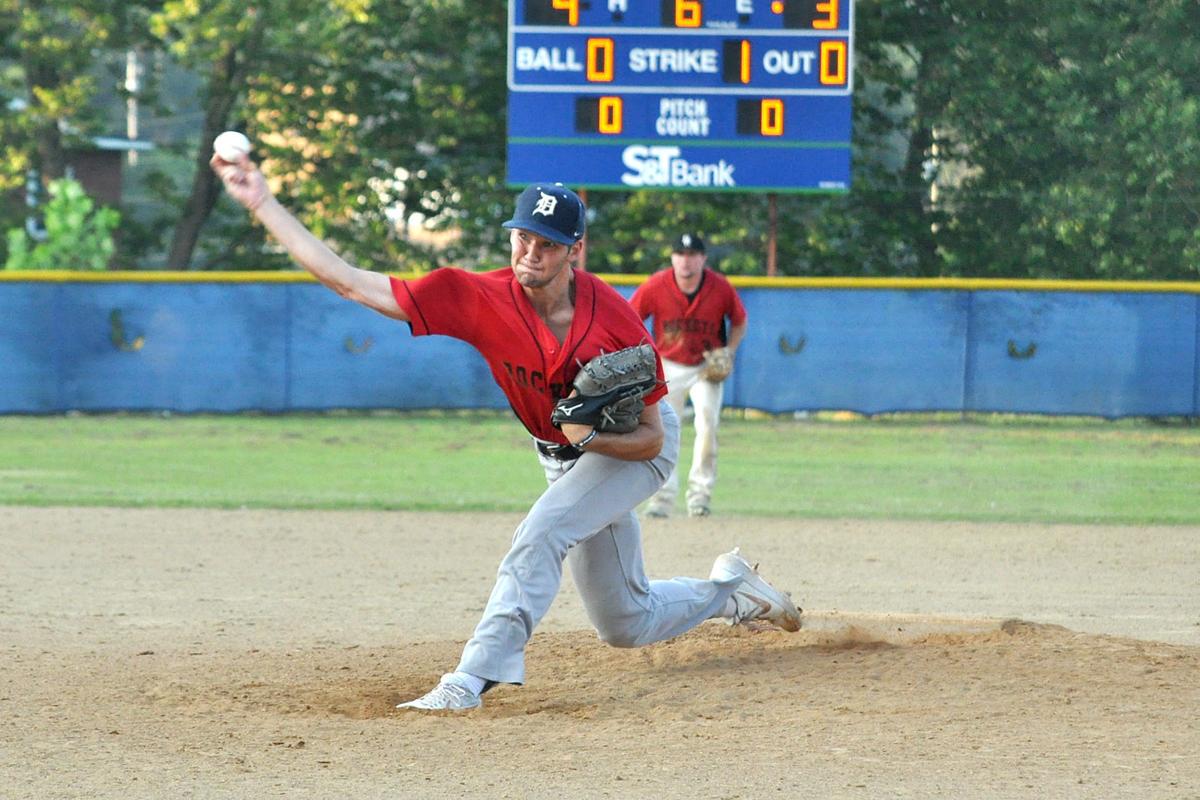 DuBois Rockets pitcher Austin Amacher delivers a pitch during the sixth inning of Sunday’s game in Brookville. Amacher got the win on the mound and T.J. Gornati picked up the save as the Rockets forced a decisive Game 7 with a 4-3 win over the Grays at McKinley Field. 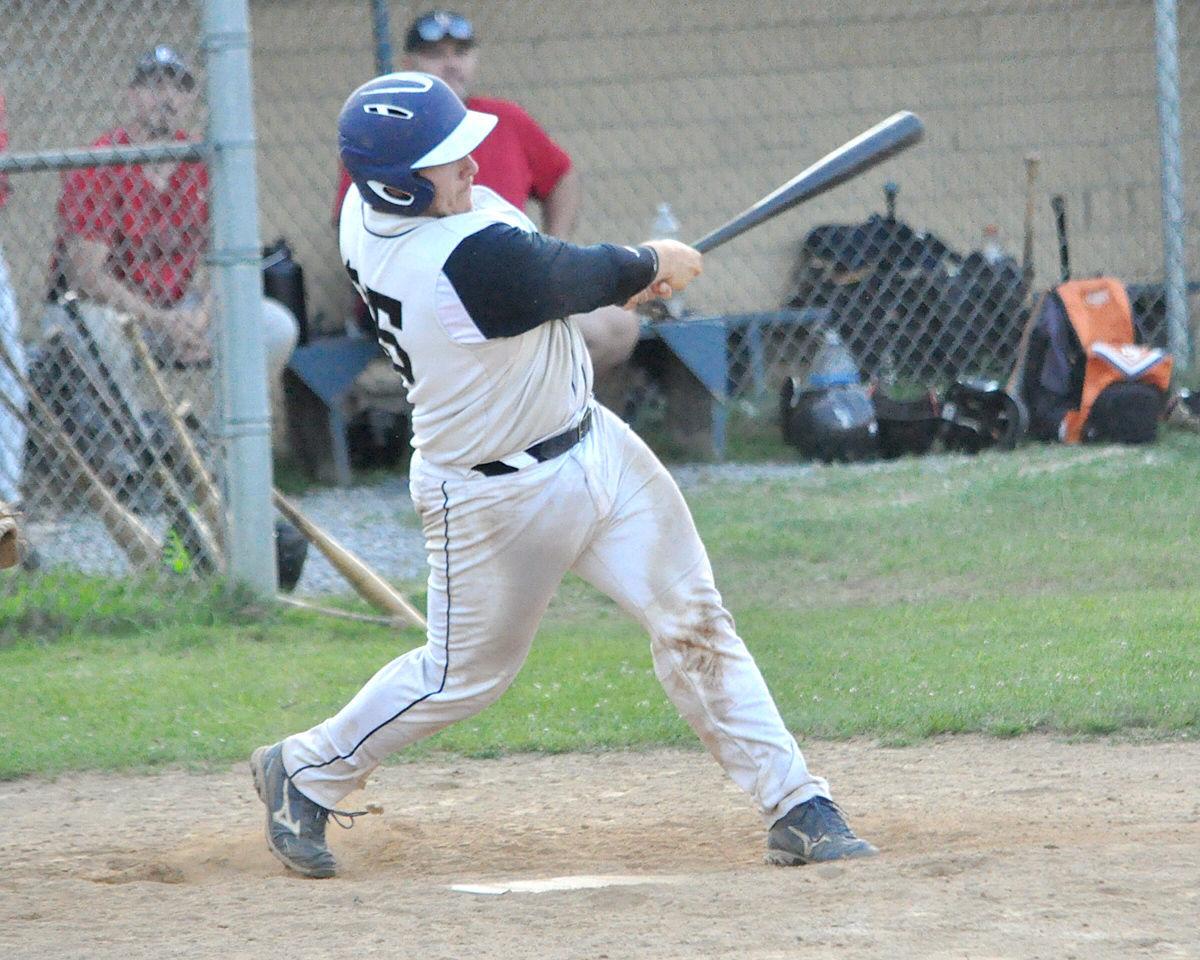 DuBois Rockets pitcher Austin Amacher delivers a pitch during the sixth inning of Sunday’s game in Brookville. Amacher got the win on the mound and T.J. Gornati picked up the save as the Rockets forced a decisive Game 7 with a 4-3 win over the Grays at McKinley Field.

BROOKVILLE — With their back to the wall, so to speak, the DuBois Rockets came out pitching … with just enough hitting.

Erasing a 3-1 series deficit with a 4-3 win over the Brookville Grays Sunday night at McKinley Field, the regular-season champion Rockets forced a decisive Game 7 against the last-place Grays Tuesday night at City Park.

After dropping a brutal 14-inning affair last Thursday at McKinley Field, the Rockets routed the Grays 14-0 Saturday, then eked out Sunday’s win to stay alive.

“You just have to do a good job keeping everyone focused. It’s a series,” said Rockets manager Jeff Gasbarre. “We’re not playing a tournament here, so we can’t win a series in game 3 or 4 and neither can they. I felt we could get to the next game in front of us and that sets us up. We feel our pitching will keep us in games and if we can get some timely hits, which we did today.”

And that was after the Rockets fell behind 3-0 quickly on Tanner LaBenne’s three-run homer off starter Austin Amacher in the bottom of the first inning.

“That’s not exactly how you draw it up,” Gasbarre said. “Lopez singles and we intentionally walked (Nathan) Bonfardine who’s been all over us the whole series and we get to LaBenne and he hits a clutch three-run homer. That’s deflating. But to chip away and finally take the lead, it feels like we’re coming together at the right time.”

The Rockets definitely chipped away, scoring runs in the second and third innings, then taking the lead for good with two runs in the fifth off Grays ace Kane McCall. The Rockets scored an unearned run thanks to two Grays errors in the second. In the third, Garrett Brown led off with a double, Thayne Morgan singled him to third and Gasbarre drove Brown with a sacrifice fly.

In the fifth with two outs, Nate Sabados singled and Matt Zimmerman ripped a double through the left-center field game to score Sabados from first to tie the game. With the bases loaded three batters later, McCall walked in Morgan Bell to give the Rockets a 4-3 lead.

That score stood up the rest of the way as T.J. Gornati notched the save with a scoreless seventh. But that wasn’t easy either. With one out, Nathan Bonfardine doubled. After a walk to LaBenne, shortstop Garrett Brown somehow ran down a Dustin Diehl grounder in the hole and was able to get the forceout at second.

“You can’t say enough about Garrett Brown,” Gasbarre said. “He’s been our centerfielder all year … He’s a gamer. I always want him on the team. He’s a game-changer.”

The Grays likely lost Bonfardine for Tuesday. He appeared to injure his hamstring sliding into third base on Brown’s play at shortstop and left the game for a pinch-runner. Bonfardine has been the Grays’ best hitter in the postseason.

Gornati then struck out Jace Miner to end the game and even the series.

“He’s been big all year,” Gasbarre said. “I’m with him at Penn State-DuBois and he’s been in some big games. He pitched in national championship games before and he’s exceptional. We absolutely like our chances with him on the mound and it’s our whole staff. We have five pitchers who could be No. 1s in this league.”

McCall, who tossed a two-hitter in the Grays’ 5-1 game two win last Tuesday, went five innings and gave up nine hits while walking two and striking out four. Jace Miner and Joe Lopez finished out the final two innings, keeping the Rockets off the board and giving the Grays a shot late.