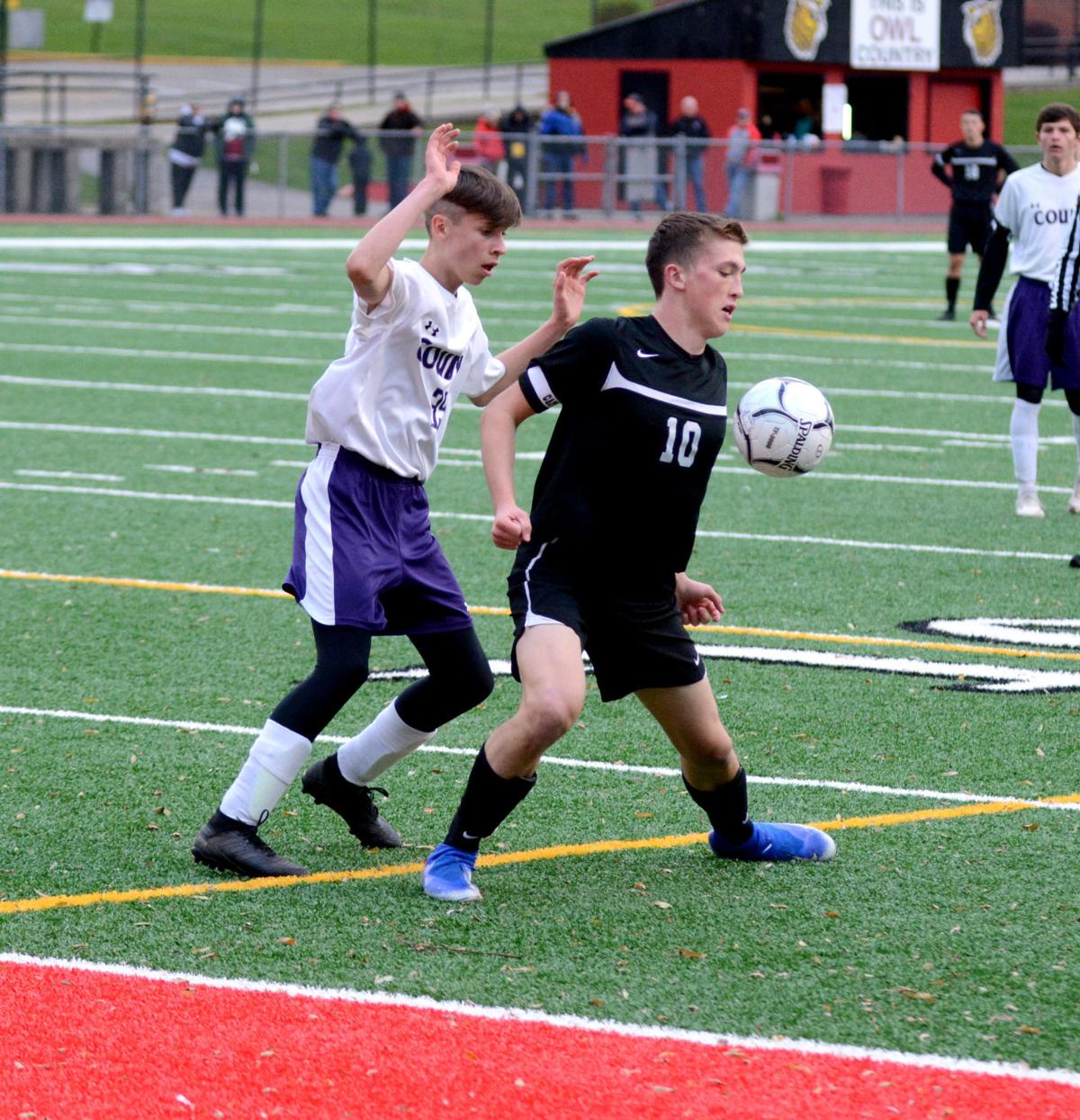 Brockway’s Noah Bash (10) settles a ball in front of Coudersport’s Jacob Hooftallon in the Falcons’ box during first-half action Saturday. 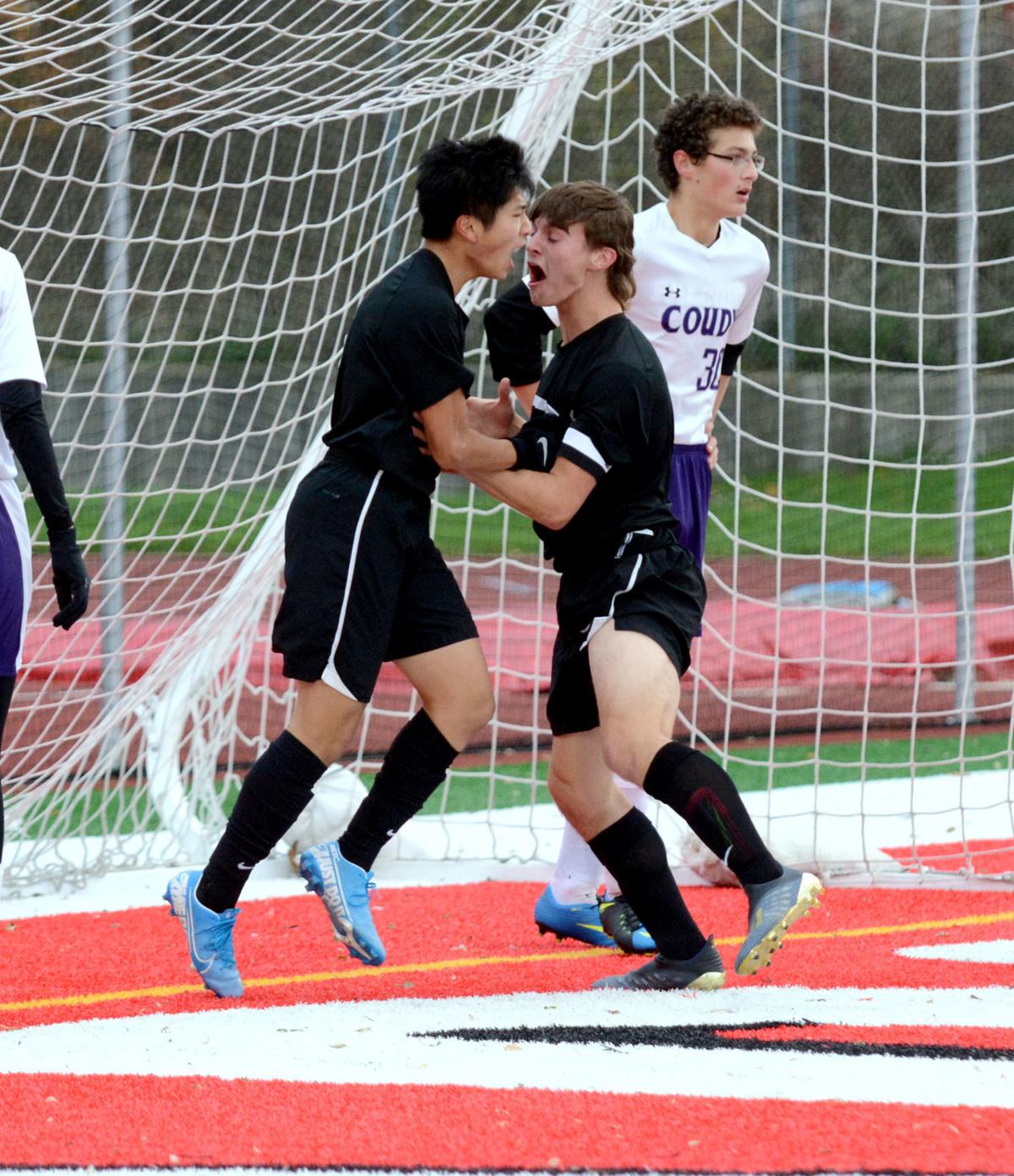 Brockway's Ryan Lin, left, celebrates with teammate Linkin Nichols after scoring the opening goal in the District 9 Class A title game Saturday against Coudersport. The Rovers went on to win, 3-0, for their third straight district title. 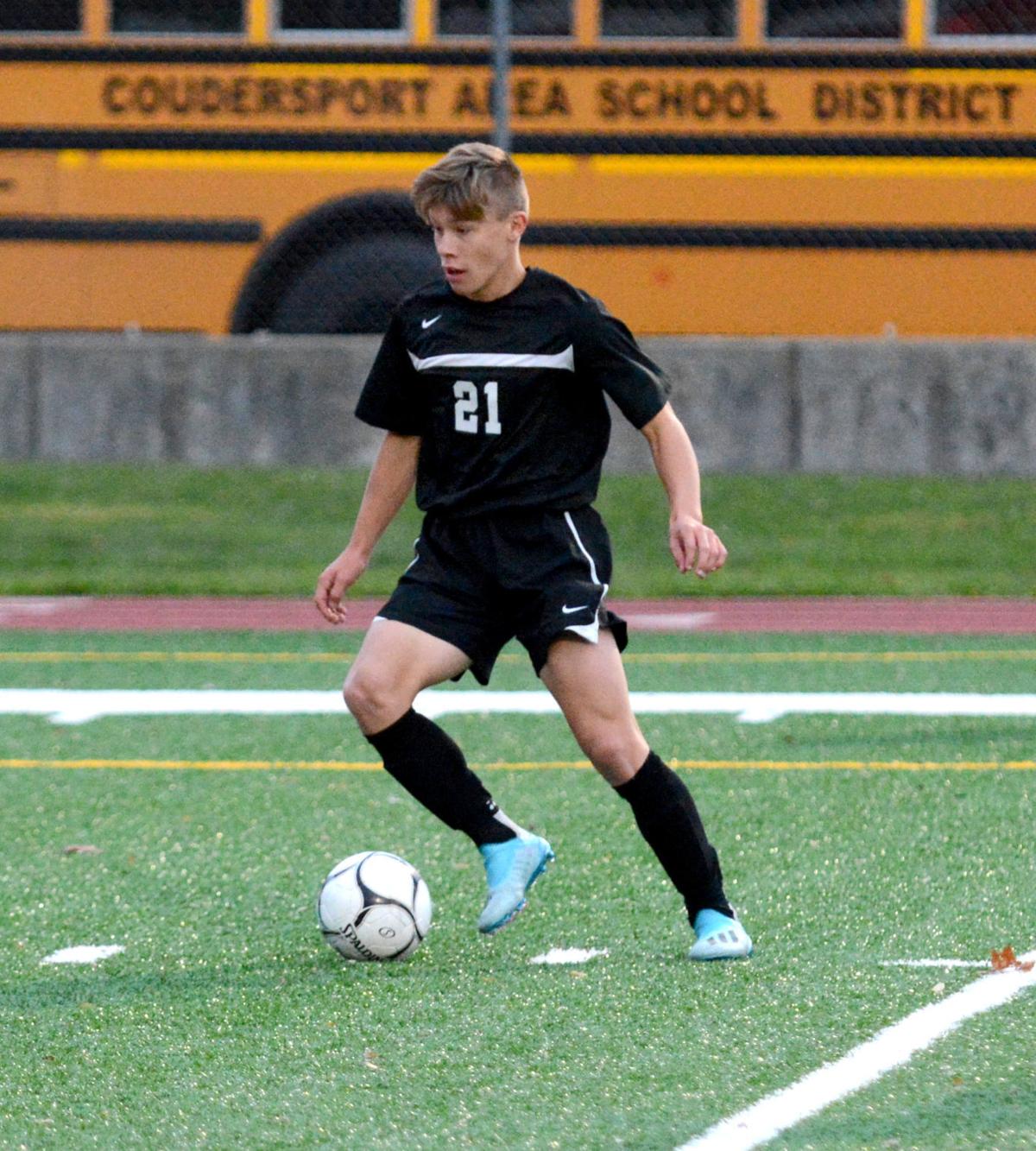 Brockway’s Marcus Bennett looks to make a pass to a teammate in the Coudersport box during first-half action Saturday in the District 9 Class A title game. Bennett scored twice in the second half in a 3-0 victory.

Brockway’s Noah Bash (10) settles a ball in front of Coudersport’s Jacob Hooftallon in the Falcons’ box during first-half action Saturday.

Brockway's Ryan Lin, left, celebrates with teammate Linkin Nichols after scoring the opening goal in the District 9 Class A title game Saturday against Coudersport. The Rovers went on to win, 3-0, for their third straight district title.

Brockway’s Marcus Bennett looks to make a pass to a teammate in the Coudersport box during first-half action Saturday in the District 9 Class A title game. Bennett scored twice in the second half in a 3-0 victory.

BRADFORD — A young Brockway boys soccer team battled through its share of growing pains during the regular season, using them as a learning experience that culminated in the program’s third straight District 9 Class A title — and first under new coach Andy Daugherty — Saturday evening in Bradford.

The Rovers (12-5-1) had to wait two extra days and make a long trek north on Route 219 to win that title. But, neither mattered little as Brockway used a strong all-around effort to shut out third-seeded Coudersport, 3-0, on a chilly evening at Parkway Field.

The championship game was originally scheduled to be played Thursday evening in DuBois. However, heavy rains as part of a tornado watch forced that postponment of the game, along with the Class A girls contest, when air pockets formed under the turf at DuBois High School as the rains temporarily flooded part of the field.

Brockway, which limited the Falcons to just four shots, got the only goal it needed from junior Ryan Lin in the ninth minute of the game. The Rovers took that 1-0 lead to the half before fellow sophomore Marcus Bennett put the game away with a pair of second-half goals.

Next up for the Rovers is a matchup in the first round of the state playoffs against Springdale, the third-place team from District 7, Tuesday at Clearfield at 8 p.m.

“It feels good,” said Daugherty of winning a district title in his first season. “It’s always the goal to get here to the championship game. They (kids) have been real determined and playing with a lot of intensity (late in season). I wasn’t real worried about it, but you still get butterflies.

“A couple in our sophomore group played in the (title) game last year, but it’s a pretty solid core we got that had to step up for us this year. And, they certainly did that.

“Ryan’s early goal was huge. That’s a mountain to get over if you get down one goal. We preached that (get lead) all week, and Ryan has been all over those bounces ... garbage goals as we like to call them. He does it all year, and it was good to see it go in early.”

Top-seeded Brockway seized control of the action in the opening minutes and pressured Coudy keeper Rosalyn Page all night. Page did her part to keep her team in the game, recording 12 saves in the loss.

Bennett caught Page off her line in the fifth minute but his shot on goal was cleared away by a Falcon defender.

Bennett had another look on goal near the 8-minute mark on the right side of the box, but Page was able to make the save and knock it towards the other side of the field. Unfortunately for Page and the Falcons, Lin had continued his run in the middle and fired home a rebound shot to make it 1-0 8:07 into the game.

Brockway kept the pressure on the Coudy net the ensuing 13 minutes.

Page stopped a shot by Noah Bash at the near post in the 10th minute, while Bennett had a redirect shot sail high 45 seconds later. In the 14th minute, Rover Linkin Nichols had a shot from the left side of the box go just wide of the far post.

Nichols had another scoring look in the middle of the box in the 20th minute, but Page made another diving save to keep it a 1-0 game. Just over a minute later, Dylan Antonuccio nearly headed home a cross from Bennett but Page got a hand on the shot, knocking it off the post.

Coudy (11-7) made a quick rush up the field after that near miss by the Rovers and got their first real scoring chance of the game. However, Jonathan Barroquiero fired a shot just wide of the right post.

Brockway countered right back with a shot from about 30 yards out by Nolan Swanson that was just wide with 17:27 left in the half.

The next seven minutes were primarily a battle in the midfield before Coudy had a scoring chance in the 30th minute. Brockway keeper Lewis Painter, who had little to do on the night, stopped a shot from the left side of the box by Caleb Burdick. Painter had to make just two saves in recording the championship game shutout.

Both sides had one more good scoring chance in the final 10 minutes of the half.

Page made another diving save on a Bennett shot with 7:40 remaining, while Aristotle Smith fired a shot wide right with 2:30 left.

Brockway took its 1-0 advantage into half. The Rovers then owned the final 40 minutes, as it held Coudy to one shot — an effort in the closing seconds that Painter smothered to the turf as time expired.

In between that save and the start of the second half, Brockway outshot the Falcons 13-0. Page played an impressive half in net, recording seven saves. But, the contstant pressure finally got to Page and her defense as Bennett scored twice to seal the Rovers’ victory.

Bennett’s first score came in the 56th minute when he blasted a penalty kick past Page after a Coudy defender was called for a handball in the box.

“We felt a lot better after that goal,” said Daugherty of Bennett’s penalty kick conversion. “Nothing is ever safe about 1-0 (lead), but that second goal was big. Marcus turned it one in the second half and played a great half.”

Prior to the PK in the first 14 minutes of the half, Page had stopped shots by Lin and Eric Young and watched as Nichols and Antonuccio each had shots be just off the mark.

Lin nearly made it 3-0 in the 59th minute but had a shot roll just wide of the far post.

Page turned away two shots by Bash and another by Lin over the next nine minutes to keep it a two-goal deficit for the Falcons. However, Bennett struck again with 8:54 to play on a shot from the right side of the box to all but ice the game at 3-0.

Page made one final save on a direct kick by Jared Marchiori with 6:16 to play.

“The little bit we got to watch Coudy (in semifinals), we kind of figured out what their game plan was and we worked on that all week,” said Daugherty. I thought we did a really good job (on defense).

“Louie (Painter) was talking before the game about how soft this turf was and he wouldn’t mind diving on it. I told him I don’t care if you don’t touch the ball the whole time, and he really didn’t have do much work. The defenders played really well, as they have all year.”