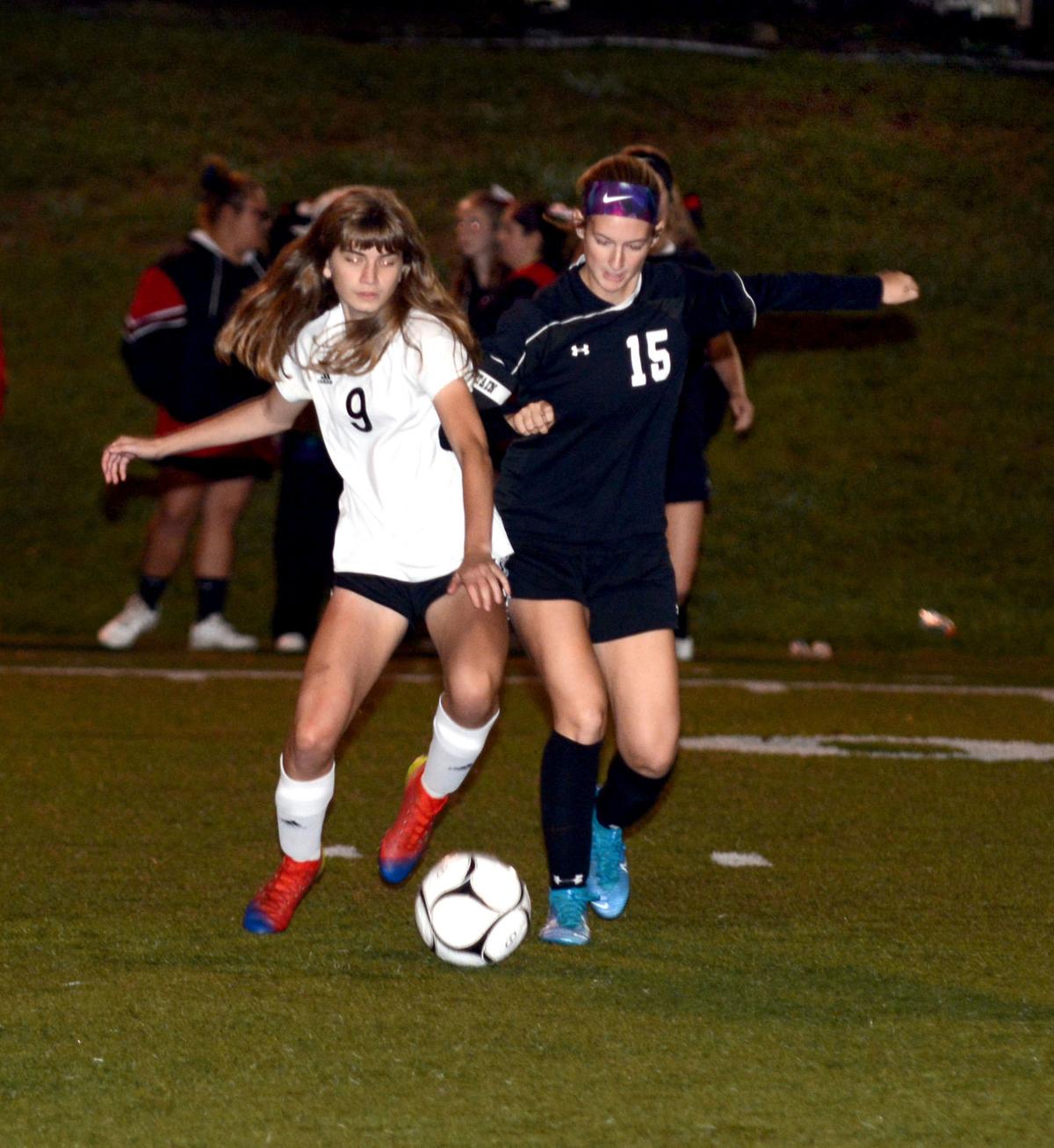 Brockway’s Chanell Britten (15) and DuBois’ Lily Zimmerman (9) battle for the ball during second half action Monday. Britten, one of eight Lady Rover seniors honored prior to the game, netted a hat-trick in a 3-1 victory. 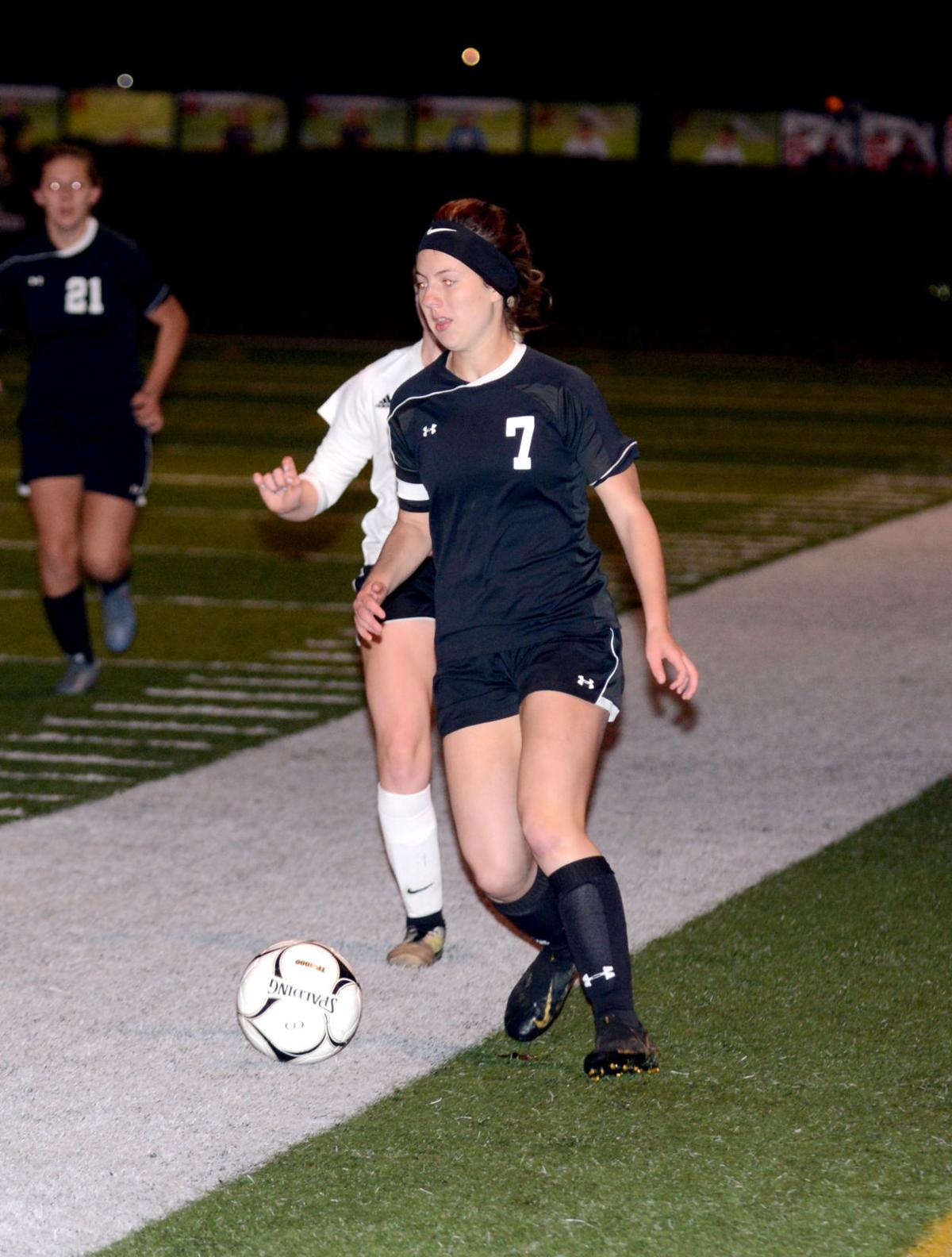 Brockway’s Morrigan Decker makes a run up the left sideline during first-half action Monday against DuBois. Decker, one of eight seniors honored prior to the game, recorded two assists in a 3-1 victory. 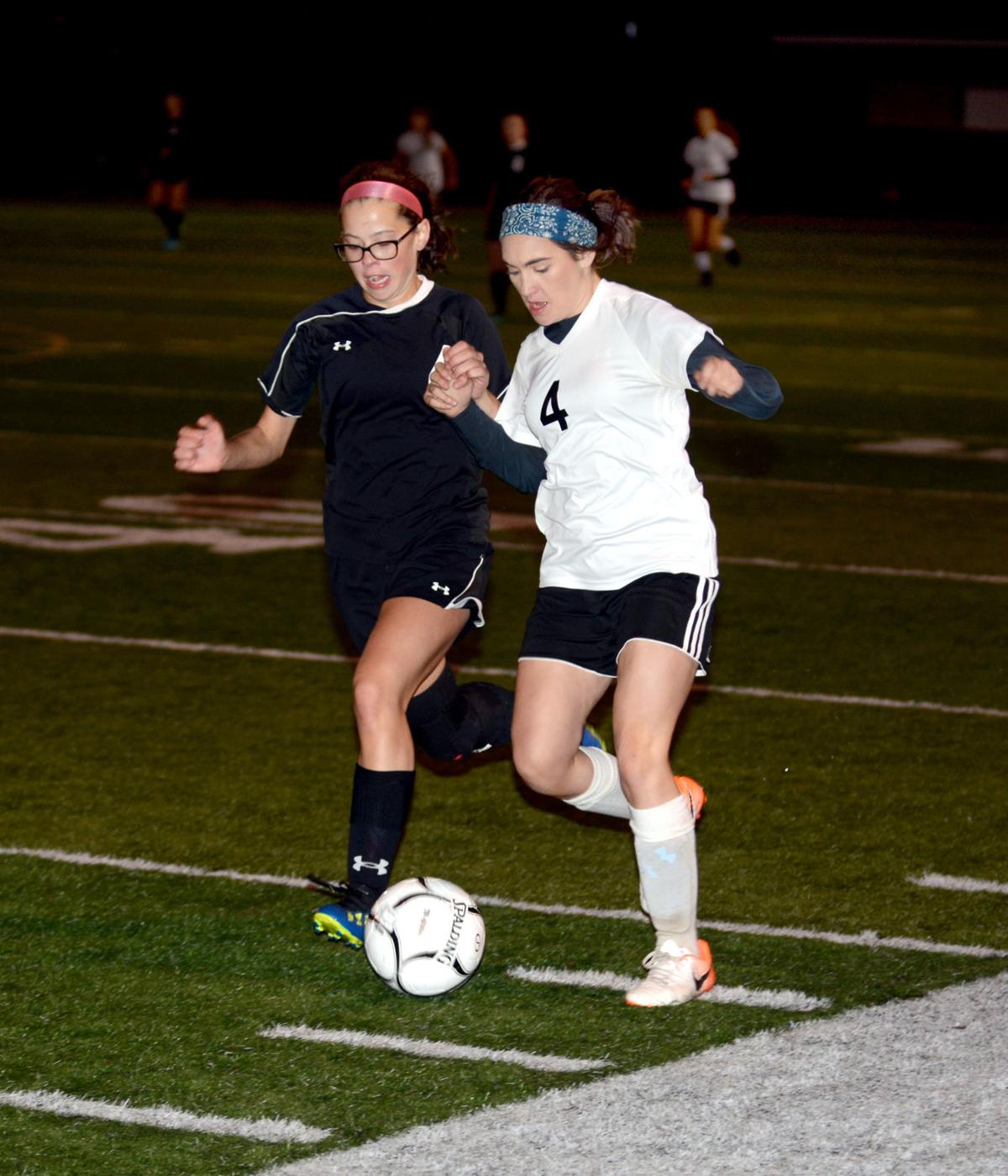 DuBois' Isabella Beers (4) makes a run up the sideline against Brockway's Delaney Wineberg during second half action Monday.

Brockway’s Chanell Britten (15) and DuBois’ Lily Zimmerman (9) battle for the ball during second half action Monday. Britten, one of eight Lady Rover seniors honored prior to the game, netted a hat-trick in a 3-1 victory.

Brockway’s Morrigan Decker makes a run up the left sideline during first-half action Monday against DuBois. Decker, one of eight seniors honored prior to the game, recorded two assists in a 3-1 victory.

DuBois' Isabella Beers (4) makes a run up the sideline against Brockway's Delaney Wineberg during second half action Monday.

BROCKWAY — The Brockway girls soccer team earned the school a Senior Night split against DuBois Monday at Frank Varischetti Field, knocking off the Lady Beavers, 3-1, after watching the Beavers edge the Rovers, 3-2, in the opening game.

That senior group then went out and played a huge factor in the win. Britten continued her recent scoring spree, netting another hat-trick to account for all three Lady Rover goals. Decker helped set up the first two of those scores.

On the other end, Overbeck recorded 15 saves to notch the victory in what was a 2-1 game early in the second half. Even Jamison, who has been injured most of the season, made an appearance as she started on defense but was subbed off when DuBois played the ball out of bounds on the opening whistle.

“We’re kind of hit or miss this season,” said Brockway coach Jess Leadbetter. “One game we come out strong right from the whistle, and another game it’s 15 or 20 minutes until we’re actually finding our style of soccer.

“Tonight was one of those example. We played pretty well right off the start and got a couple quick goals, then it became kick ball for both teams I think and got to be a little sloppy.

“DuBois gave us a good game tough, and we knew they were aggressive. But, tonight was definitely about the eight seniors — a great group of girls who have been a big part of the team the past four years. It was nice to have a win for them.”

DuBois, which came in off a 3-2 win at previously undefeated St. Marys Saturday, founds themselves in a quick whole Monday night as Britten and Decker teamed up for a pair of goals in the fist eight minutes.

The first came off a corner kick, as Decker played a ball into the box that DuBois keeper Kara Tilson tried to knock away. However, her punch went to the right side of the box, where a waiting Britten blasted home a shot 2:14 into the game.

DuBois nearly answered right away, as Isabella Beers tracked down a through a ball, then chipped the ball past Overbeck. That chip was a little hard, and by the time Beers tracked it down near the end line, her shot towards an open net went off the side of the cage.

After Wood had a shot turned away by Tilson in the seventh minute, Decker and Britten connected again in the eighth when Britten redirected in a Decker cross to make it 2-0 with 7:19 gone in the game.

Neither team scored the remainder of the half, but it wasn’t from a lack of effort. DuBois outshot Brockway, 10-3 over the final 30 minutes of the half but couldn’t crack Overbeck — who made nine first-half saves to keep it a 2-0 game.

Lady Beavers Austyn Burkett and Rachel Sickeri each had multiple shots turned away by Overbeck during that stretch.

DuBois carried that momentum into the second half, with Sickeri recording the first shot — which Overbeck had to make a diving save on just over three minutes in.

She bent a corner into the box, and after a brief flurry, Leah McFadden found herself with the ball. And, she didn’t miss on her opportunity as she fired a shot into the back of the net to make it a 2-1 game with 36:30 to play.

DuBois nearly pulled even just over five minutes later, but Overbeck made back-to-back saves on shots by Burkett and Riley West.

Brockway then took some wind out of DuBois’ sails as it made a quick rush up the field — a push that resulted in Britten’s third and final goal of the night. Her score came 16 seconds after Overbeck stopped West.

Both teams had their chances from there, but the goalkeepers kept the score where it was.

Tilson made a nice diving save on a shot by Britten in the 58th minute, while Overbeck made a pair of nice saves in the 64th minute. She initially stopped shot by Burkett before making a diving save on a Sickeri shot, knocking it out of play for a corner kick.

She also denied Sickeri in the 67th minute when the Lady Beaver made a run on goal off a through ball by Burkett. Overbeck made one final save with just under 10 minutes to play to preserve the victory.

“When you’re playing from behind, you’re kind of fighting two battles,” said DuBois coach Mike Town of his team’s early deficit. “But, I’m still so proud of these girls for the way they have turned the corner this season.

“They are playing with so much heart, and we’re definitely creating opportunities and playing exciting soccer. We just have find way to finish (opportunities), but we’re getting there.”

Both teams are back in action Wednesday.

Brockway is scheduled to play at Punxsutawney, while DuBois hosts Altoona.