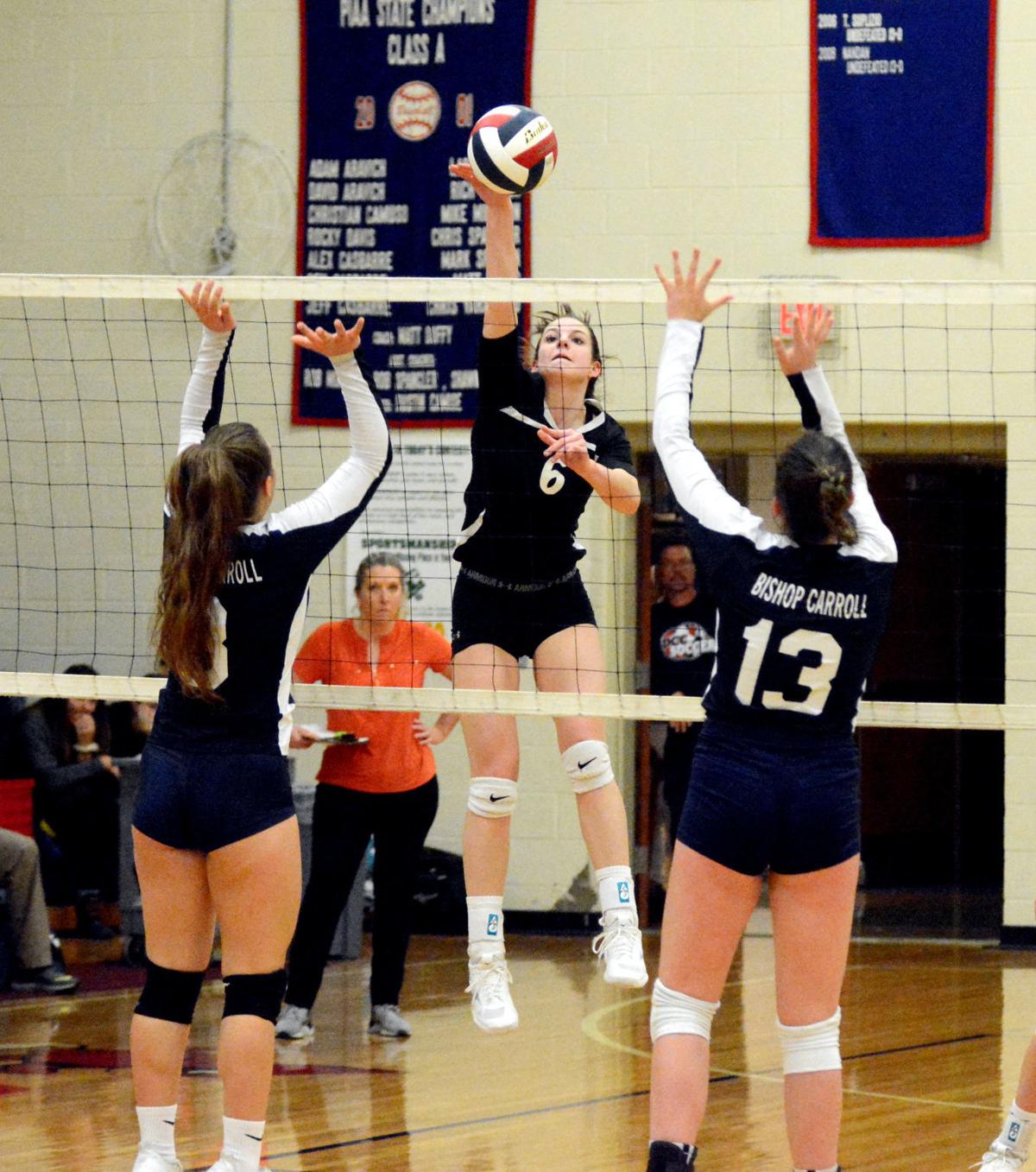 Clarion’s Maddie Schill (6) blasts a spike between the block attempts of Bishop Carroll’s Madita Dieseler (8) and Eleanor Long (13) during first-set action Saturday in a sweep of the Lady Huskies in a PIAA Class A quarterfinal match. Schill and the Lady Cats square off against Northern Cambria for the third straight year Tuesday at Clearfield, with a spot in the state finals on the line. Clarion’s Maddie Schill (6) blasts a spike between the block attempts of Bishop Carroll’s Madita Dieseler (8) and Eleanor Long (13) during first-set action Saturday in a sweep of the Lady Huskies in a PIAA Class A quarterfinal match. Schill and the Lady Cats square off against Northern Cambria for the third straight year Tuesday at Clearfield, with a spot in the state finals on the line.

HYDE — Two storied volleyball programs meet on the court Tuesday night in the PIAA Class A semifinals, when Clarion and defending state champion Northern Cambria clash at Clearfield High School with a berth in the state finals on the line.

Clarion and Northern Cambria were ranked first and second, respectively, in the state in Class A in the most recent Pennsylvania Volleyball Coaches Association weekly poll.

Both teams are led veteran coaches — Clarion by Shari Campbell and Northern Cambria by Mike Hogan — who each have spent more than two decades at their respective schools building two of the most respected small school programs in the state.

Campbell took over at Clarion in 1999, and since then has led the Lady Cats to 16 state tournament appearances in 21 years. Clarion just hasn’t reached states but been a consistent winner during that two-decade plus stretch, reaching the state quarterfinals 13 of those 16 years and the state semifinals on seven occasions.

And, Clarion put together a historic run early on this decade, as it became the first and only District 9 team to make the state finals three years in a row (2010-2012) in the same sport. That impressive three-year run culminated in the program’s only state title in 2012, with a sweep of Williamson in the state championship match, punctuating a perfect 23-0 season.

Hogan, who played collegiately at Penn State (1984-87), has been at Northern Cambria even longer. Hogan has manned the Lady Colts bench as head coach since 1989 and led Northern Cambria to the PIAA tournament 11 times.

The Lady Colts have captured three Class A state titles during his tenure — 2005, 2009 and last year.

Given both program’s success, it should come as no surprise they aren’t strangers to playing each other in the state tournament.

More recently, the schools have split meetings in the state tourney the past two years.

Losses to the eventual state champ are nothing new to Clarion, as 11 times in the previous 15 trips to states the Lady Cats have lost to the team that ended up striking gold. Some of those losses occurred in the old pool play format and didn’t direct end Clarion’s season at the time.

Those two matches are fresh in the minds of both squads entering Tuesday’s showdown, particularly a handful of players who had prominent roles in both matchups — most notably Clarion’s Maddie Schill (senior) and Brenna Campbell (junior) and Northern Cambria juniors Maggie Hogan and Camryn Dumm.

Schill and Hogan, Mike Hogan’s daughter, have been key pieces at the net in both matchups.

Hogan had seven first-set kills two years ago as a freshman as the Lady Colts won the opening set, but Clarion made some adjustments and her slowed her down from there as she recorded just eight more as the Lady Cats won the final three sets to advance.

Schill teamed up with the now graduated Maya Thornton and Hailey Sintobin for a combined 30 kills in the win in an offense led by Campbell, who is the two-time reigning District 9 Class A (Coaches’ Association) MVP as a setter.

A year ago, Hogan was dominant at the net from the get-go as she racked up 29 kills to go along with 19 service points.

Schill had seven kills in the loss, while Korrin Burns, now a sophomore, led Clarion that night with eight kills as a freshman.

On Saturday, Burns and freshman Aryana Girvan led Clarion with nine kills a piece against Carroll, while Schill and Constantino each had eight kills. Schill added two blocks. Campbell led the way with 13 service points and 35 assists, while sophomore Jordan Best had nine points while filling in for Girvan at libero.

Given the firepower and tradition on both sides, the matchup is poised to be a great one as they battle to see who gets to play for another state title.

The winner advances to Saturday’s state finals against either D-5 champ Berlin or D-11 champ Nativity. That title match will be played at 10:30 a.m.