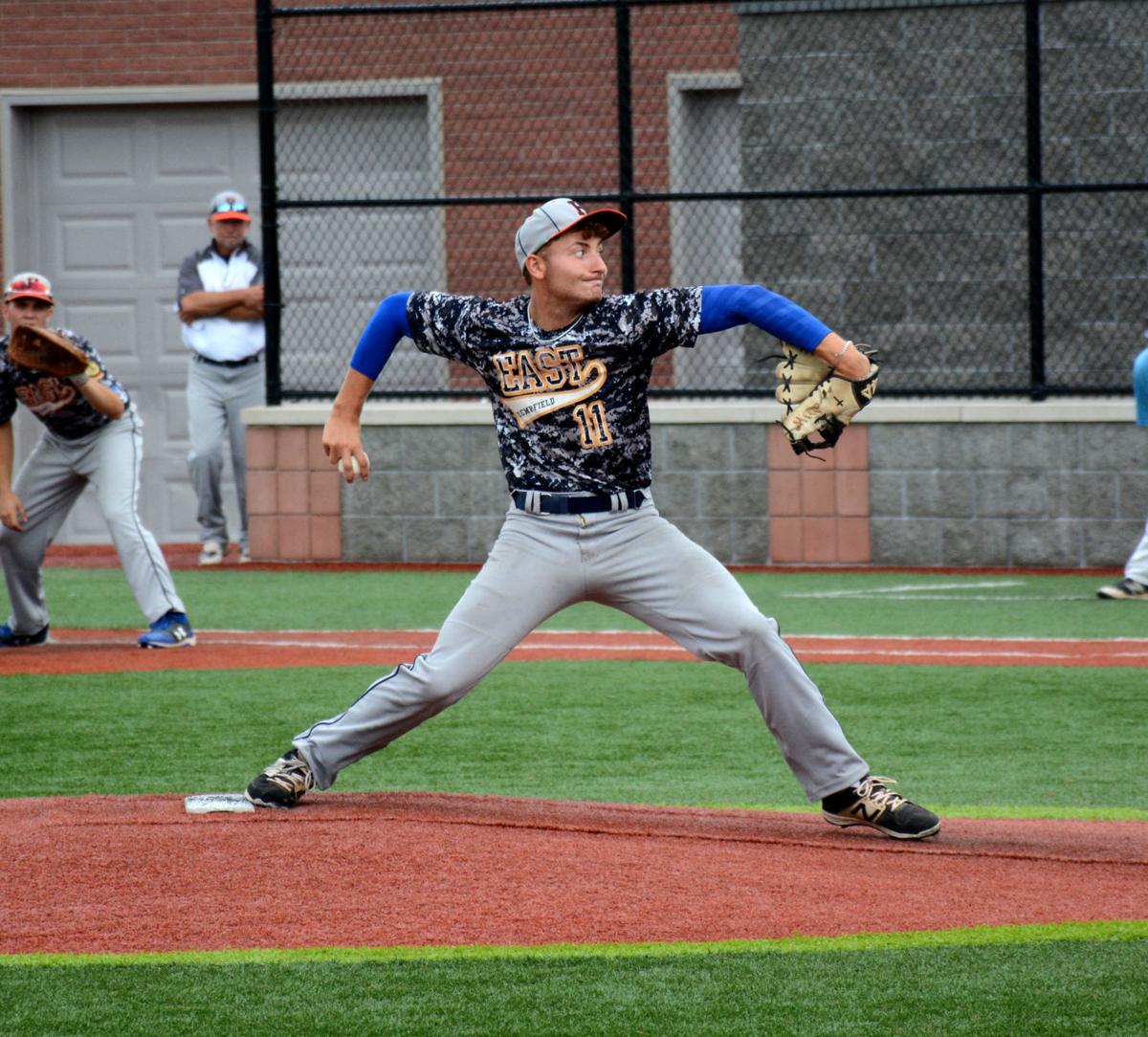 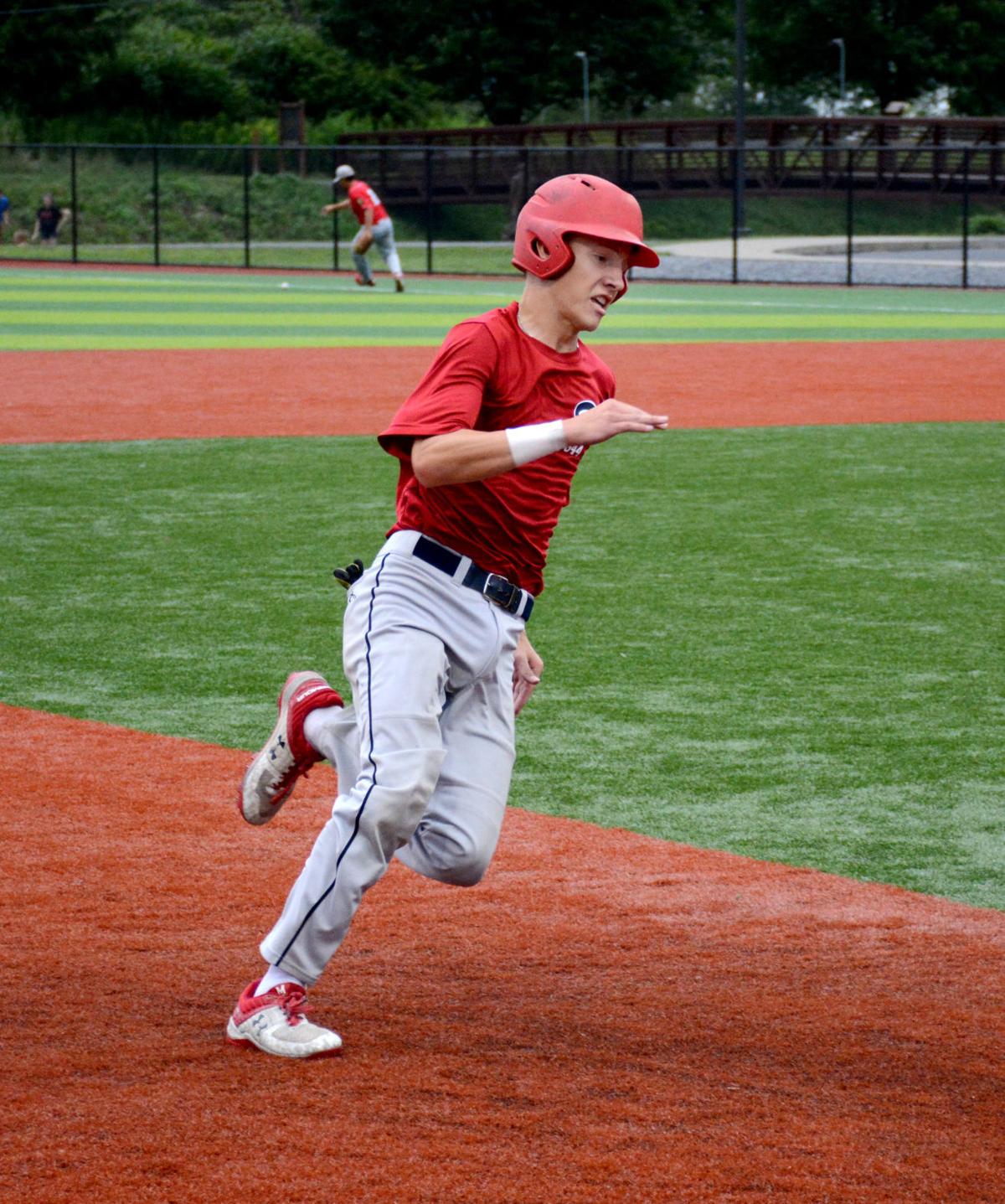 Swoyersville’s Garrett Vought hustles around third base to score as South Parkland right fielder Koby Staivecki, background, chases down a double by Colin Conway that spun away from him on the turf in the bottom of the first inning Tuesday. 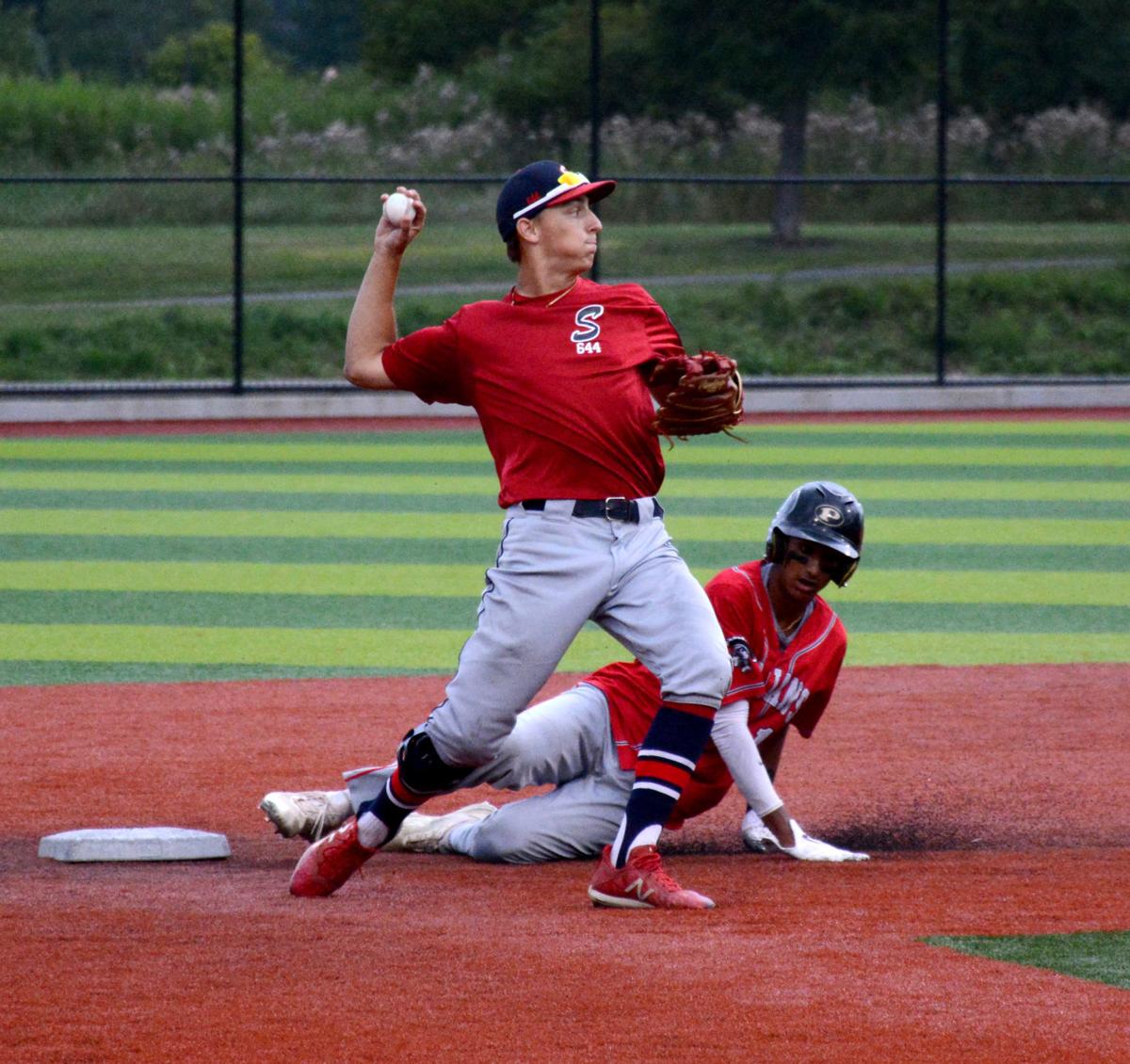 Swoyersville second baseman Colin Conway looks to turn a double play as South Parkland's Tejpal Khela slides into second during the top of the second inning Tuesday at Showers Field. Conway's throw to first wasn't in time. Conway was 1-for-3 with a RBI double and run scored in a 3-2 victory.

Swoyersville’s Garrett Vought hustles around third base to score as South Parkland right fielder Koby Staivecki, background, chases down a double by Colin Conway that spun away from him on the turf in the bottom of the first inning Tuesday.

Swoyersville second baseman Colin Conway looks to turn a double play as South Parkland's Tejpal Khela slides into second during the top of the second inning Tuesday at Showers Field. Conway's throw to first wasn't in time. Conway was 1-for-3 with a RBI double and run scored in a 3-2 victory.

DuBOIS — And then there were two.

Undefeated Swoyersville (4-0) and Hempfield East (3-1) will battle for the Pennsylvania American Legion Baseball State Tournament title this afternoon at Showers Field after the teams proved to be the two survivors in the five-day event.

It will be the second meeting in three days between the squads, with Region 5 champion Swoyersville having beaten region 7 champ Hempfield East, 4-1, in Monday’s winners’ bracket finals game.

The teams are set to play at 3:45 p.m., with Hempfield East having to beat Swoyersville twice if it is to win the state championship. The if-necessary game will follow if needed.

Swoyersville won state titles in 2013 and 2016, while Hempfield East has never won the state legion tournament. Both teams advance to Great Lakes Regional play by making the finals.

Swoyersville completed its undefeated run to the finals in walk-off fashion in Tuesday night’s contest, getting a one-out RBI single from Daniel Gibbons that scored Michael Kane with the game-winning run in a 3-2 victory against South Parkland.

The game was otherwise a pitcher’s duel between South Parkland starter Adam Smith and the Swoyersville duo of Richard Kolesar and Draig Cooley-Ruff.

Smith allowed just six hits while being saddled with the loss. He gave up three runs, all earned, in 6 1/3 innings of work while striking out four and walking four.

Kolesar went the first six innings for Swoyersville, allowing two earned runs on four hits while earning a no-decision. He struck out three and walked four. Cooley-Ruff tossed a scoreless seventh and got the win thanks to Gibbons’ walk-off single. He gave up two hits while walking one.

After Kolesar tossed a scoreless top of the first, Swoyersville grabbed the lead with a pair of runs in the bottom of the first.

Garrett Vought and Colin Conway opened the inning with back-to-back doubles down the right-field line, with Conway’s two-bagger scoring Vought. Conway later came home on a groundout by Patrick Adamski.

Swoyersville held that 2-0 lead until the fifth, when South Parkland finally got to Kolesar for a pair of runs to tie the game.

Gabriel Stay got things started with a one-out walk and went to third on a double by Joseph Webber. Stay then scored on a wild pitch before Webber came home on a single by Anthony Palumbo to knot things at 2-2.

The game went to the seventh tied, with South Parkland putting together a rally against Cooley-Ruff.

Koby Staivecki led off the seventh with a single and was bunted to second by Stay. Staivecki reached third on a two-out single by Palumbo, then Swoyersville elected to intentionally walk Adam Mellinger to load the bases.

The decision paid off as Colley-Ruff fielded a comebacker off the bat Joshua Miller for the final out to leave the bases loaded.

That set the stage for the bottom of the seventh and Gibbons’ late-game magic.

In Tuesday’s opener, Hempfield East used a strong performance from Matthew Wicker on the mound and a big fifth inning at the plate to finish off Hopewell in a 6-0 victory to reach the final day of the tournament.

Wicker tossed a five-hit shutout, striking out one while walking three.

Wicker got all the offense he needed in the top of the second when John McBride smacked a two-out single to center field to score Reid Hipps.

Hempfield East maintained that 1-0 lead into the fifth when it exploded for four key big insurance runs.

Hipps got things started with a one-out walk, while Noah Sweeney followed with a single. A single by Dom Carrera then loaded the bases for McBride, who plated a run on a fielder’s choice that saw all the runners reach safely on a bad throw.

After a flyout, Dajauhn Hertzog came through with a clutch two-out single to left that chased home Sweeney. Hopewell then changed pitchers, but reliever Anthony Lasala fared no better as Andrew Rosenberg greeted him with a single that scored Carrera to make it 3-0.

Hunter Eperesi was then hit by a pitch with the bases loaded, forcing home McBride to push the Hempfield East lead to 5-0.

Hempfield East scored its final run in the sixth.

Hipps led off the inning with a triple but was forced to stay at third on a groundout. Carrera then put down a safety squeeze bunt that resulted in the second out but also plated Hipps from third to set the eventual final at 6-0.

Hopewell put two runners on in both the bottom of the sixth and seventh innings, but Wicker worked out of both mini-jams to finish off his shutout victory.

MECHANIC Wanted part-time possibly lead to full-time. Must have experience