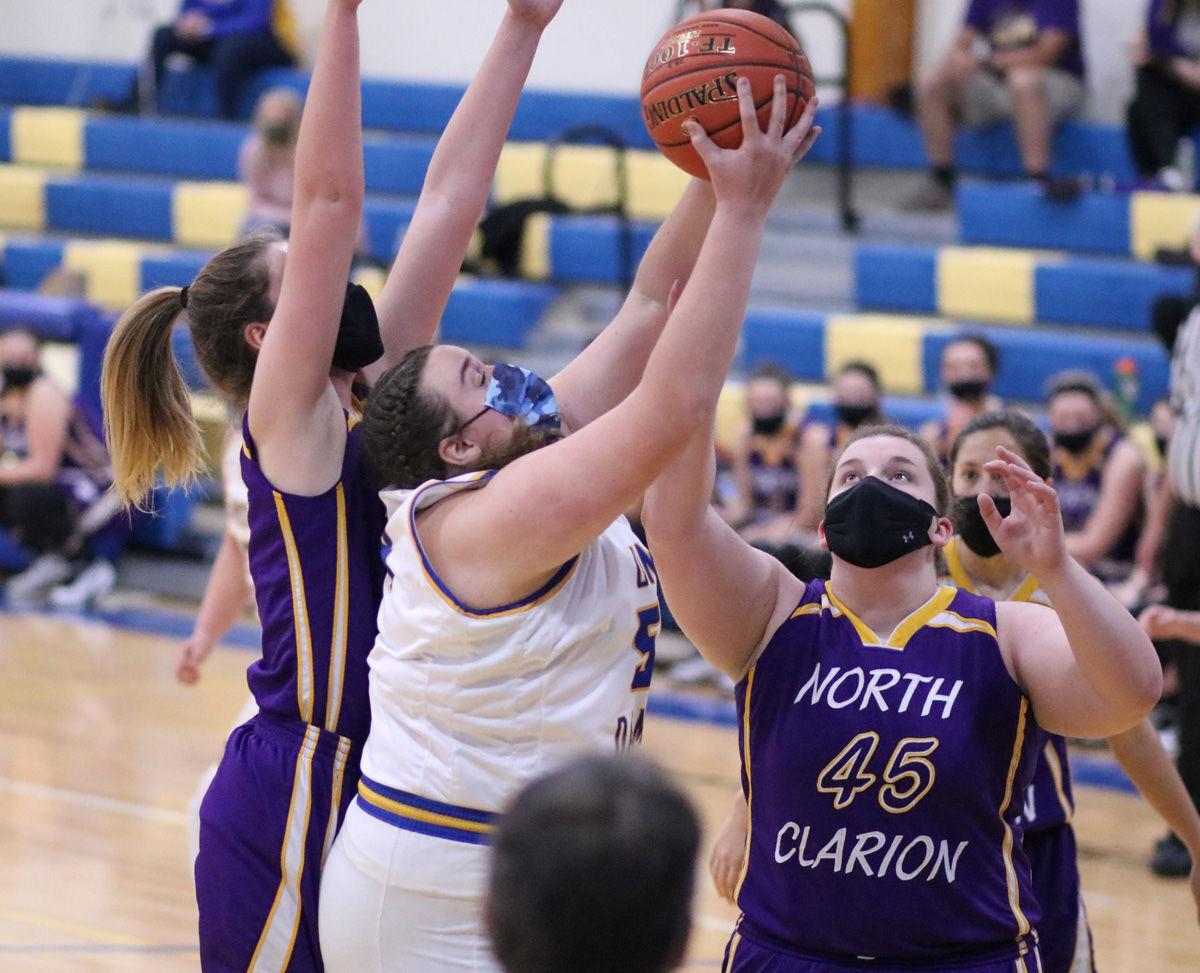 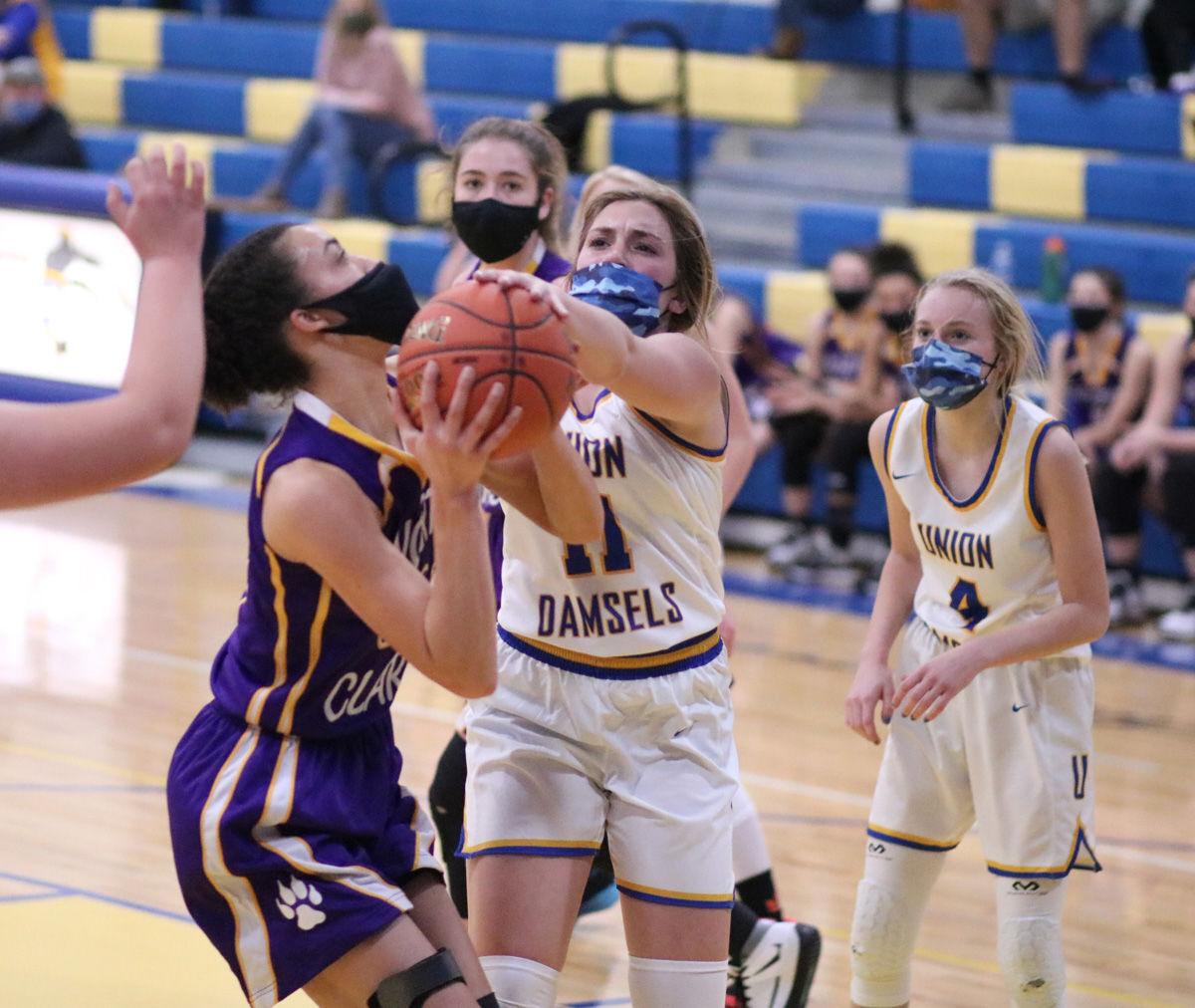 Union’s Hailey Kriebel reaches over to block the shot of North Clarion’s Trinity Thompson during Monday’s game in Rimersburg. The Damsels’ Hailey Theuret (4) looks on.

Union’s Hailey Kriebel reaches over to block the shot of North Clarion’s Trinity Thompson during Monday’s game in Rimersburg. The Damsels’ Hailey Theuret (4) looks on.

RIMERSBURG — Close but not quite enough.

The Union Damsels basketball team nearly handed North Clarion its first conference loss in six years, but in the end the She-Wolves were able to overcome 31 turnovers to pull out a 47-41 win in the much-delayed, highly-anticipated season opener for both teams Monday at the Dungeon.

The Damsels had North Clarion on the ropes when they took the lead for just the second time in the game — and for the first time since 8-6 in the first quarter — on a pair of Maggie Minick free throws with 6:22 to play.

But the advantage was fleeting, as sophomore Emma McFarland was able to hit a shot while getting fouled by Dominika Logue with 6:06 left. McFarland converted the old-school 3-point play to put North Clarion back in front for good, 36-35.

The She-Wolves then extended the lead to 41-35 on a basket by Amya Green off a McFarland feed followed by a pair of Addison Shaftic free throws and a charity shot by Gwen Siegel with Siegel’s free throw at the 3:23 mark ending the 8-0 run.

Union didn’t go away quietly, as Keira Croyle converted an old-school three-point play of her own with 3:17 left to close the gap back to three, 41-38.

But Siegel, the junior who was one of the more experienced players on the floor for the young She-Wolves who lost four players to graduation from its PIAA Class 1A quarterfinal team from a year ago, answered with bucket to back it 43-38.

Siegel had a monster game with a game-high 21 points and a game-best 16 rebounds.

The Golden Damsels answered the Siegel bucket with a putback by Kennedy Vogel to get back within three one last time, 43-40, with 1:58 to go, but Claire Kriebel scored at the 1:08 mark after a She-Wolves timeout to make it 45-40.

North Clarion missed four straight free throws to leave the door open for Union, but Croyle missed two charity shots that would have made it a 3-point game with 24.7 second left ending any real hope for a comeback.

Logue had a solid game for Union with 20 points, five steals and four rebounds but spent much of the second half in foul trouble picking up her third foul with 3:45 to play in the third quarter and her fourth on the McFadden basket with 6:06 to play.

Logue was strong early scoring all eight points during an 8-0 first-quarter run that erased an early 6-0 deficit and gave Union a short-lived 8-6 lead midway through the opening eight minutes.

In fact, she scored 12 of Union’s first 14 points and 18 of the Golden Damsels’ first 24 points helping Union stay within four, 28-24, early in the second half.

But after picking up her third foul, Logue was held to just one basket, early in the fourth quarter, the rest of the game. That fourth-quarter tally, at the 7:22 mark tied the game at 33 after Union had trailed by five, 33-28, late in the third quarter.

Despite the 31 turnovers, North Clarion had an answer for every Union run.

Rebounding helped North Clarion, as the She-Wolves outrebounded the Golden Damsels 54-28, including 17 offensive rebounds — 13 of which came in the second half.

The Damsels had two more games on the schedule this week with a home game against Moniteau Wednesday before traveling to Keystone Friday. Next Tuesday, they host Cranberry.