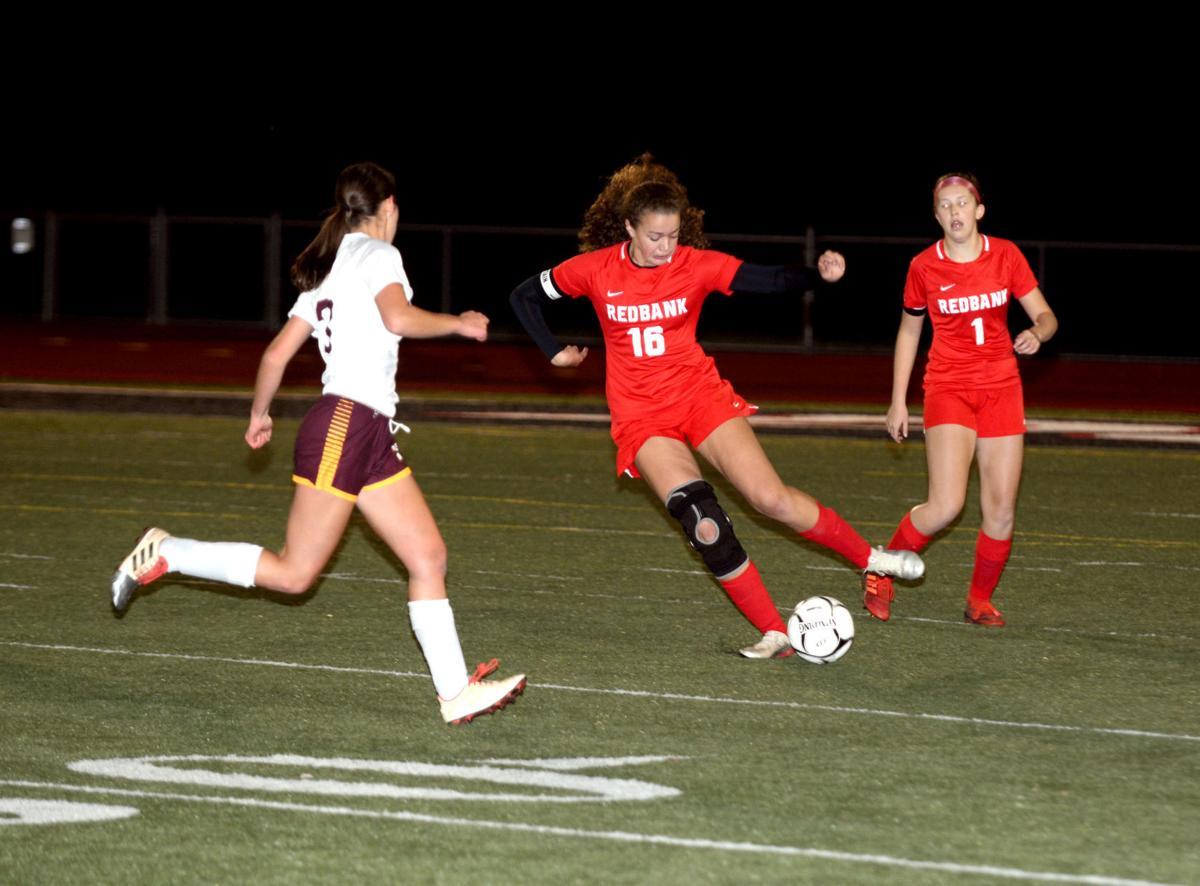 Redbank Valley defender Megan Gourley (16) clears the ball out of her own end during first-half action Tuesday night as Elk County Catholic's Mary Cerroni (3) closes in on the play. 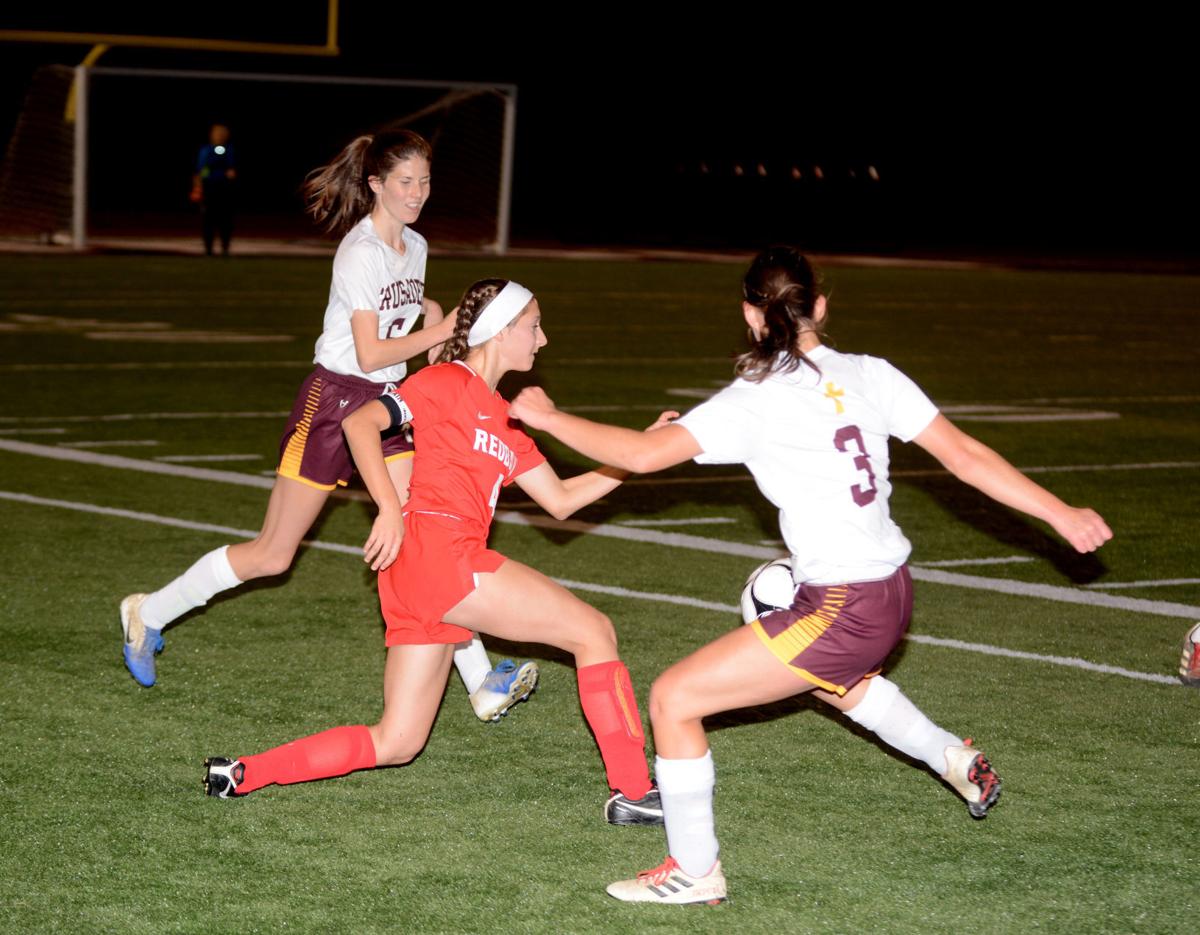 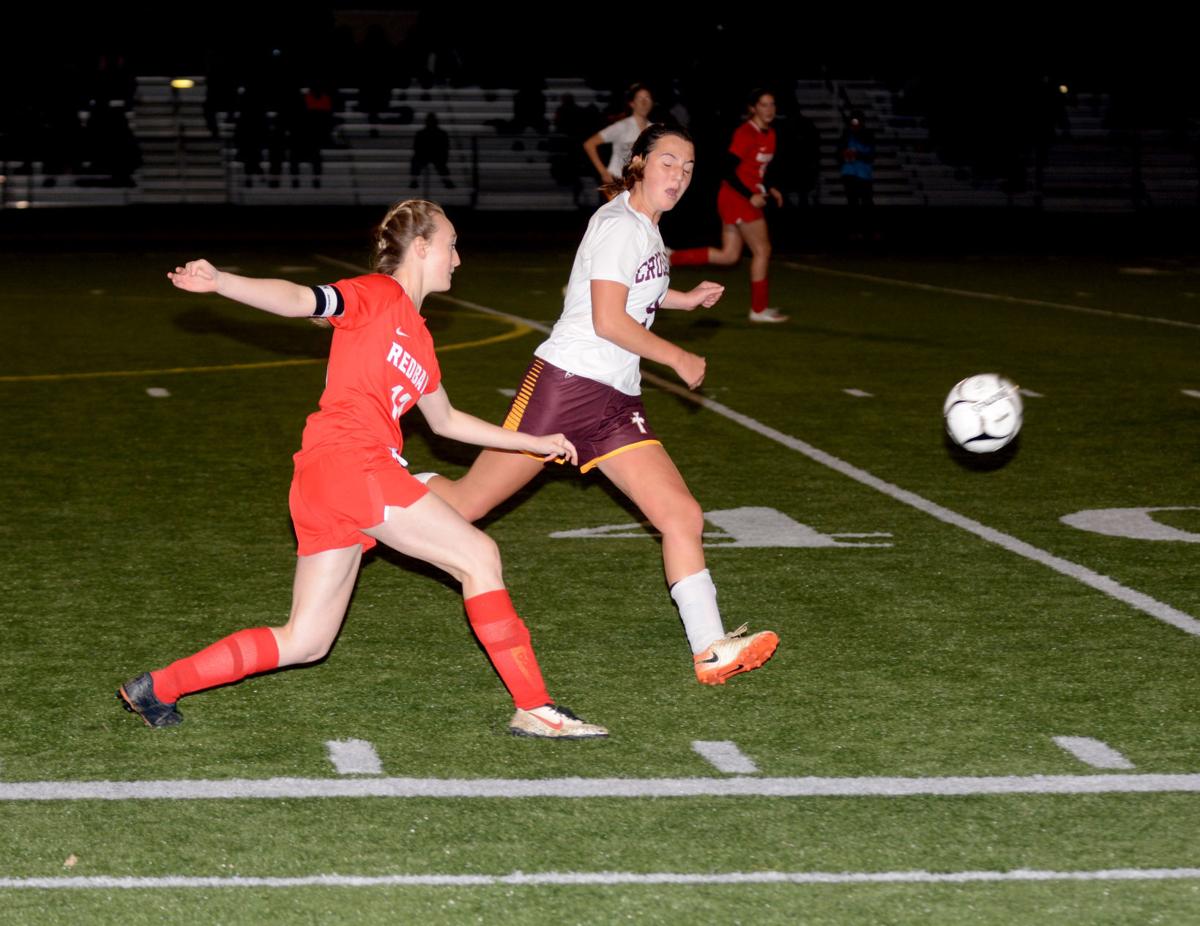 Redbank Valley defender Megan Gourley (16) clears the ball out of her own end during first-half action Tuesday night as Elk County Catholic's Mary Cerroni (3) closes in on the play.

DuBOIS — The Elk County Catholic Lady Crusaders soccer team has become the Cinderella story of the District 9 playoffs, and it punched its ticket to The Ball — otherwise known as the Class A title game — Tuesday night with a 1-0 upset victory against third-seeded Redbank Valley at DuBois Area High School.

Freshman Rylie Belsole gave ECC the story-book victory when flipped a shot over top Lady Bulldogs keeper Gabby Dinger as she came sliding out to make a challenge with 8:16 remaining in the game. Senior Julia Toncich set up the game-winner, chipping a pass around a defender for Belsole to track down.

The ECC defense, led by senior Olivia Sorg and junior keeper Kara VanEerden, did the rest from there to hold off the Lady Bulldogs. Redbank gad two real scoring chances over the seven minutes in a game where shots came at a premium for both sides.

Redbank senior Megan Gourley had a direct kick from outside the top right corner of the box sail high with 6:15 remaining, while VanEerden stopped a shot by senior Brooke Eberle with 1:27 remaining to preserve her shutout.

The win was especially sweet for VanEerden, who started her first game in goal all season in the Lady Crusaders’ biggest game because starting keeper Allison Geci was injured Monday in practice.

Geci’s injury left an already short ECC bench even shorter, as the head coach Ken Vogt had just one healthy sub for the game. The team started the season with just 14 players.

Despite those numbers, ECC now finds itself in the first D-9 title game during Vogt’s tenure as coach. On top beating Redbank, seventh-seeded ECC (7-11) also knocked off second-seeded Forest Area, 5-1, in the quarterfinals.

“It was like this every time we played them this year,” said Vogt, whose team lost 2-1 in overtime at home Oct. 3, then 1-0 in New Bethlehem Oct. 14. “They all were one-score games, and I told the girls, ‘It’s going to be hard fought. We can’t give up any easy goals, and one goal is going to win this game.

“And, we were the one to score it this time. Our struggle this year has been finishing on the offensive side, and we worked a lot of those short, quick combinations and that was a nice goal.

“VanEerden also stepped up and played a great game. She was our goalie last year, and I told her, ‘Hey, we’re gonna put you in for the district semifinals. It’s just like riding a bike, get in there and remember what you did last year.’ She didn’t complain about it and ran with it.

“The defense played well in front of her. Olivia (Sorg) is hard to get past with her speed and knowledge of the game. And, the other three we had back really stepped up and played hard. You could tell they wanted it.”

Redbank, which beat ECC twice during the regular season in a pair of one-goal games, came out strong and pressured VanEerden early. She and her defense were up to the challenge though.

The Lady Bulldogs’ Raegan Beamer found herself open after tracking down a through ball in the midfield in the third minute and made a strong run on goal. VanEerden came out to challenge and saved Beamer’s initial shot.

The ball rolled towards the right side of the box, where another Redbank player fired a second shot the was blocked an ECC defender. A scrum ensued, with the ball appearing to be stuck between a couple players legs. VanEerden hustled back and dove into the pile to secure the ball.

Redbank got the ball right back and fired a long shot on goal from the left side, but VanEerden came up with another save.

Beamer had another scoring chance in the sixth minute as she made a run on goal from the left side of the box. However, her shot was just off target as it hit the side of the net, momentarily getting a cheer from the Redbank faithful who thought it had gone in for a goal.

Elk County’s first scoring chance came at the 7-minute mark when it was awarded an indirect kick in the Redbank box after Dinger played a pass back from a defender.

The kick was only about five or six yards in front of the goal line, so Redbank packed that line with defenders. The indirect was played out to Belsole, who had a shot stopped by Dinger.

Redbank final shot of the first half came just past the 10-minute mark as VanEerden stopped a direct kick.

A vast majority of the half from there was played between the 18-yard lines.

Elk County mustered just two scoring chances over the final 29 minutes of the half.

Sorg had a direct kick from just outside the box turned away by Dinger in the 22nd minute, while ECC came up empty again with 1:10 left in the half when it was awarded a second indirect kick in the Redbank box.

The second half proved to be more of the same, as the teams battled in the midfield trying to find scoring opportunities. Elk County held a slim 4-3 edge in shots over the final 40 minutes as both sides finished with seven in the game.

In the end, all ECC needed was Belsole’s goal in the 72nd minute to continue its magical ride to the D-9 finals, where the Lady Crusaders take on defending champ Brockway. The top-seeded Lady Rovers beat Curwensville, 7-1, in the other semifinal Tuesday — using a five-goal second half to win going away.

“The other games we played them were also one goal games, so we knew it would be difficult,” said Redbank coach Mike Dawson, whose team finished 10-10. “We knew we’d have to work to try to get anything on offense going.

“We had a couple good looks early, but then that momentum kind of fizzled out. We regrouped at half and built some more (momentum), but we just couldn’t get one good look in the second half to try to tie it up in last 10 minutes.

“It’s nice to look forward to the future with what we have coming back, but the four seniors (Eberle, Gourley, Carley Shick, Kennedy Heeter) where a big part of what we did this year. It just hurts we couldn’t get them one more game.”

Elk County and Brockway play for the D-9 Class A title Thursday at 7 p.m. at DuBois. The opening game that night pits Brockway against Coudersport in the boys Class A championship game.

Those teams meet in Thursday’s first game at DuBois starting at 5 p.m. followed by the girls’ final at 7 p.m.

In Class 2A, it’s a doubleheader Wednesday night at Brockway’s Varischetti Field. Karns City meets Clearfield in the girls’ final at 5 p.m. with Karns City facing Punxsutawney in the boys’ final at 7 p.m.

Last Thursday in the Class 3A boys’ final at Brockway, it was Bradford edging Clearfield, 3-2.