You are the owner of this article.
Edit Article Add New Article
You have permission to edit this article.
Edit
Welcome, Guest
Home
COVID-19
News
Sports
Obits
Opinion
Local Events
Announcements
Classifieds
Share This
1 of 6 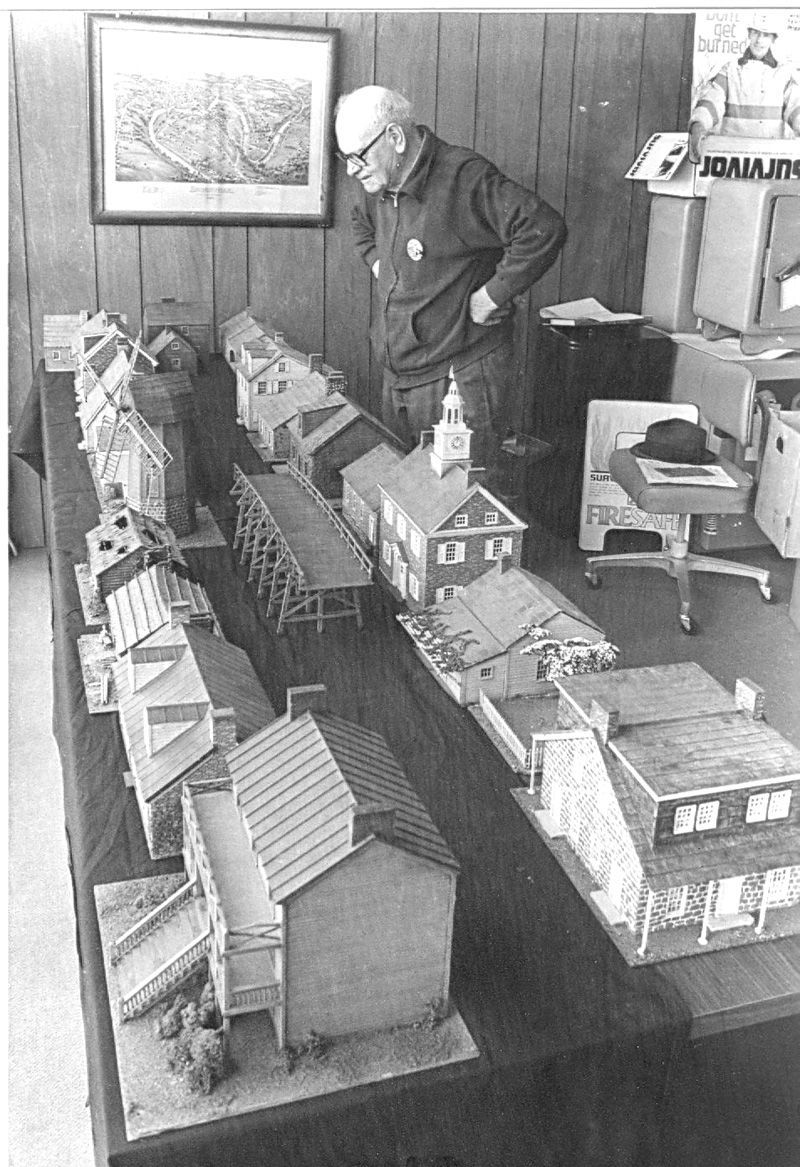 The late Charlie Bowdish inspects his models at Buhl Planetarium in 1980. This close-up of some of the display models of the Bowdish exhibit shows the Jefferson County Courthouse as it once looked. A hot air balloon and trains can be seen in a portion of the miniature railroad display that is part of the Bowdish exhibit at the Jefferson County History Center in Brookville. The trains, as well as animated pieces, will be running this coming Saturday. Victor Stahlman, a Clarion University student who is interning at the Jefferson County History Center, helps to set up one of the new exhibits at the center. The “First People: Native American Lifeways” exhibit opens Saturday during the Bowdish Birthday Bash.

The late Charlie Bowdish inspects his models at Buhl Planetarium in 1980.

This close-up of some of the display models of the Bowdish exhibit shows the Jefferson County Courthouse as it once looked.

A hot air balloon and trains can be seen in a portion of the miniature railroad display that is part of the Bowdish exhibit at the Jefferson County History Center in Brookville. The trains, as well as animated pieces, will be running this coming Saturday.

Victor Stahlman, a Clarion University student who is interning at the Jefferson County History Center, helps to set up one of the new exhibits at the center. The “First People: Native American Lifeways” exhibit opens Saturday during the Bowdish Birthday Bash.

BROOKVILLE — The staff at the Jefferson County History Center are busy this week as they prepare for the 101st annual Charles Bowdish Birthday Bash on Leap Day.

While the bash will be celebrated on Saturday, February 29, Bowdish’s actual birthday is Feb. 28. Born in 1896, his claim to fame would come through his artistic talents.

Bowdish, according to a book about him that was written by Carole A. Briggs, had four older brothers and two sisters. One of his brothers had died on the same day he was born. His three brothers and father were mechanically inclined, building objects such as merry-go-rounds and carousels for entertainment. They also designed scenery for shows performed by the Bowdish Stock Company.

For his brother George and his new bride’s Christmas wedding, Bowdish created a miniature scene that included familiar Brookville buildings found on Main Street. Through the urging of a family friend, word got out and it is said 600 people came to the Bowdish house that year to view the display.

He would continue each Christmas to create a new display. According to Brigg’s book, “In 1928 over 800 people came to see the wonderful sight of the Bowdish tree and decorations.”

In 1930 Bowdish would recreated Brookville as it would have looked in 1830. The special display was for the town’s Centennial celebration.

Bowdish kept registers of the people who visited his annual display and by 1939, 100,000 people had viewed his holiday displays that were erected at Christmas and would remain up until February. The display at this time were still set up in his home at 8 S. White St.

His scenes included mills, trees and by the 1940s there were trains, horses and buggies, a waterfall and more. The annual exhibit would continue to grow until in 1954 Bowdish moved it from Brookville to Pittsburgh – to the Buhl Planetarium.

In 1954, Bowdish would do two displays – one for viewing in Brookville and one at Buhl Planetarium. It is said 3,000 people viewed it in Pittsburgh in one day and that 1,500 people visited Brookville in the first week of the display. He would do the same again in 1955 but that would be the last time he built a Brookville exhibit.

Bowdish continued to live in Brookville despite working with Buhl Planetarium as “model builder and consultant” until his death in 1988.

Bowdish’s miniature railroad display would later be moved to the Carnegie Science Center in 1992. It was in 1998 during a Victorian Christmas celebration in Brookville, that Bowdish models would once again appear, this time in the windows of a local store.

According to Briggs, in 2000 the Carnegie Science Center and the Jefferson County Historical Society came to an agreement that would allow those Bowdish models not in use at Carnegie to be displayed once again in Brookville.

Today, there is a gallery set aside at the Jefferson County History Center for an exhibit that brings Bowdish’s creativity to life.

This coming Saturday the trains will move along the tracks and various animations will be in action. The exhibit will be open from 11 a.m. to 4 p.m.

Kat Lyons, JCHC administrative coordinator, says, “The Bowdish crew has been working hard since January on the newly redesigned trains and animations. The trains will be chugging up and down the tracks and whistling through the tunnels. The Bowdish miniature display will showcase new arrangements of people, places and things relating to Jefferson County.”

There will be more to see during the 101st Bowdish Birthday Bash at the Jefferson County History Center.

JCHS has redone the exhibit panels to show how Native Americans in this region gathered food, grew crops, traveled and traded, and interacted with European settlers. A series of pull-out drawers holding projectile point typology where people can bring in their arrowheads and identify them by type and by age have also been added. In the window is a life-size Paleo-Indian hunting with his wolf-dog, with atlatl (spear-throwing device) in hand.

Also featured will be a new diorama (model) of Scripture Rocks Heritage Park Native American rock shelter and the artifacts excavated by North Fork Chapter 29 and JCHC. The diorama was built by Ken Burkett using photos of the rock shelter before excavation.

Also NEW in the evolving, award-winning Stones N’ Bones Exhibit are more ice age mega-mammal real fossils and a replica of a giant carnivore of the time which must be experienced.

Admission to the exhibits is by donation. For more information, call 814-849-0077 or visit jchconline.org

Local author to be at celebration

Local author Ken Raybuck will be joining the annual Bowdish Birthday Celebration on Saturday at the Jefferson County History Center with his newly published book, You Meet Everyone Twice. He will have copies available or can personalize a previously purchased book.

A Jefferson County native, Raybuck recently retired after 30 years as a banker and worked at other jobs far removed from fictional writing.

“I always wanted to tell a fictional story," he said, "because I knew a book had the potential to outlive a lot of other stuff in my life.”

He spent the last year combining his real life experiences, along with some stories he heard from others, into a fictional account of a young man's wayward life set in the 70s and 80s.

This book takes the reader from a young man’s early years living on a farm, to risking a daring mission that would bring him back to the hills and valleys of western Pennsylvania. It explores the relationships in his life as friends change over time and become intricately involved in his return to that quiet little town in Pennsylvania.