Jay (front) and Corban Potter ride on the newly paved BMX pump track at the Philipsburg 13th Street/Slabtown playground. Both riders said they enjoy the paved track more than the dirt one that was originally built in 2015. 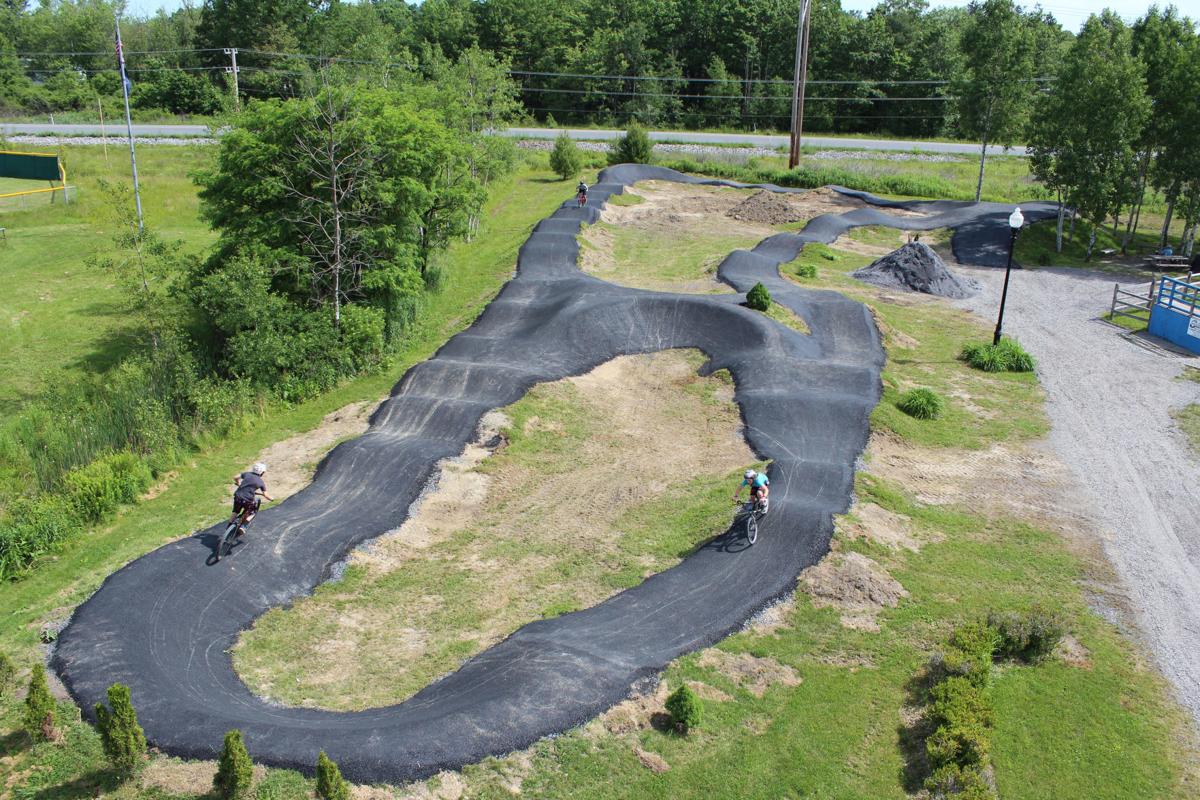 Dave King of Dirtsculpt said he and his crew spent three days paving the BMX pump track in Philipsburg last week. Shown here riding the track on its first full day of use are Corban Potter, Jay Potter and Ayden Socie.

Jay (front) and Corban Potter ride on the newly paved BMX pump track at the Philipsburg 13th Street/Slabtown playground. Both riders said they enjoy the paved track more than the dirt one that was originally built in 2015.

Dave King of Dirtsculpt said he and his crew spent three days paving the BMX pump track in Philipsburg last week. Shown here riding the track on its first full day of use are Corban Potter, Jay Potter and Ayden Socie.

PHILIPSBURG — Back in 2015, a dirt BMX pump track was constructed at the 13th Street/Slabtown playground with the help of some local residents and the company Dirtsculpt. Four years later, Dirtsculpt returned to Philipsburg to pave the track.

Philipsburg Borough Manager Joel Watson said the company started work on the track on June 5 and finished up things on Tuesday. Watson said resident Tracy Potter – who contacted Dirtsculpt originally in 2015 – has children that race BMX and they were familiar with how certain bicycle parks are throughout the country.

“They had originally planned on, at some point, paving at least the corners because they required maintenance to keep them safe,” Watson said.

However, Watson said Dirtsculpt, led by Dave King, gave a better deal to the municipality because of it being a permanent structure and it would be beneficial to those in the community using it. So the decision to pave the entire thing was made. Dirtsculpt had a three-man crew that prepped the track for paving, in which New Enterprise and HRI, Inc. helped with the project. The project itself did not cost anything to the borough, as support for it will be supplied through the Centre Foundation.

King said the paved pump track is the second of its kind in the state, with the other public one located at Buhl Park in Hermitage. It took his crew three days of actual paving.

“It’s a great thing to have in the community,” King said. “It also helps kids stay active.”

While the pump track – in which a bicyclist can make it around a lap without actually having to pedal – is technically built for bicycles, King said scooter riders and skateboarders could use the track now since it’s paved.

Watson said when the track was dirt, it took quite a bit of maintenance to keep it in top shape. With the paved track, that will change.

The wear of the pavement also will not age as rapidly as what a normal road does.

“It’s not like a driveway or highway where it gets salt applied to it,” Watson said. “So it should be really long lasting compared to a road surface.”

Another perk of the pavement King said is that it will extend the riding season.

People of all ages can ride on the track from dusk to dawn each day, with Watson saying that helmets are required and that the policy is strictly enforced.

There were plenty of children trying out the new paved track the day after it was finished. Jay Potter, 11, and his brother, Corban, 9, of Philipsburg, and Ayden Socie, 12, of Smoke Run, were a few of the first youths to give it a try. All three said they regularly rode the track when it was dirt and said the paved track made it much smoother.

“I like it better when it’s paved,” Socie said.

Watson said having something like this in the community is a big benefit.

“Not every kid is into stick and ball sports,” Watson said. “The kids that are out at the track, it’s keeping them outdoors and (staying active). You can come here and do the real thing instead of on a video game.”