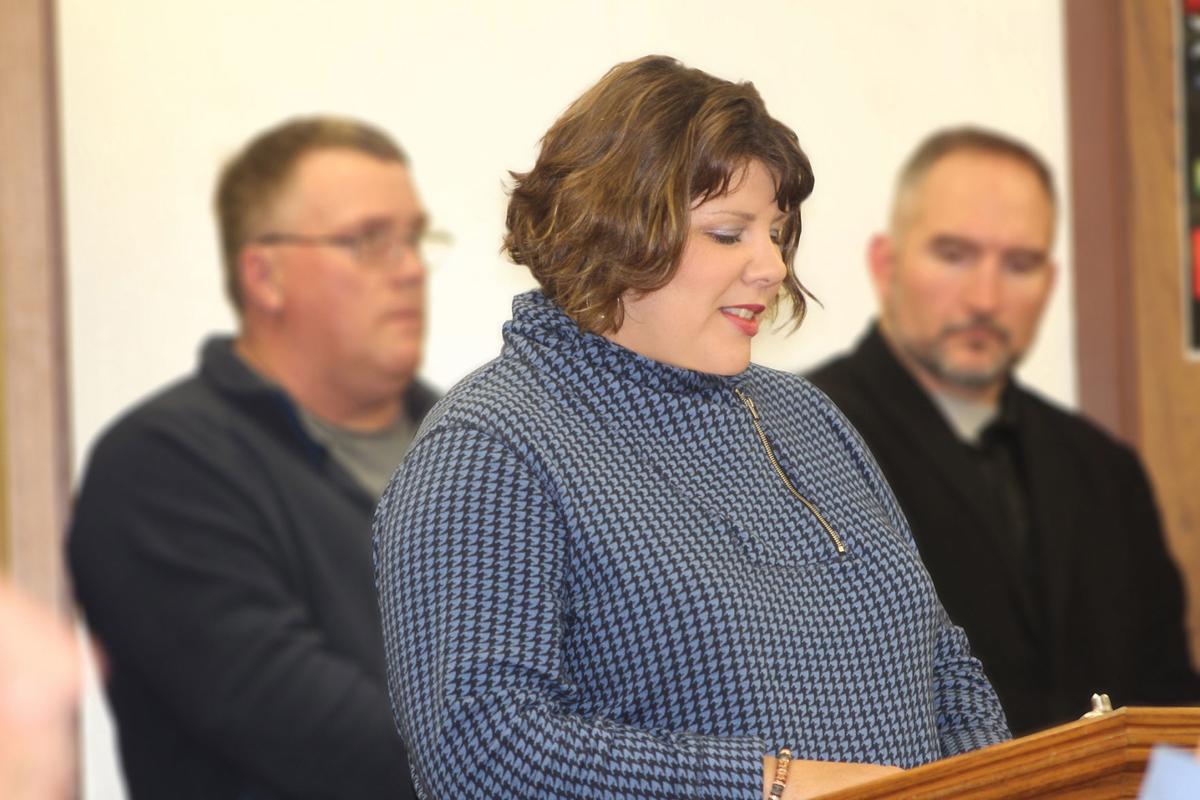 Amy Marshall, wife of Justin Marshall, speaks on behalf of her husband at Thursday’s DuBois Area School Board meeting. 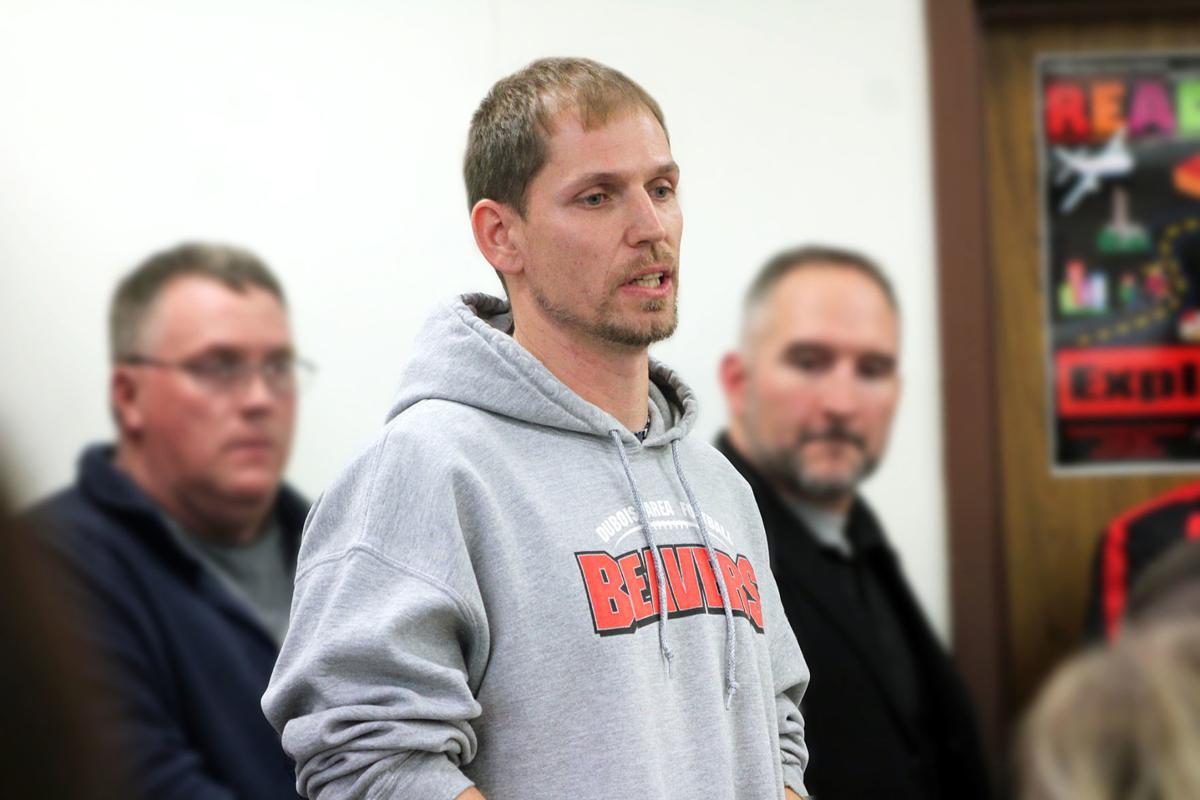 Jim Thompson spoke at Thursday's DuBois Area School Board meeting in support of high school football coach Justin Marshall, who was recently told by district officials that they will be seeking a new coach for next season. 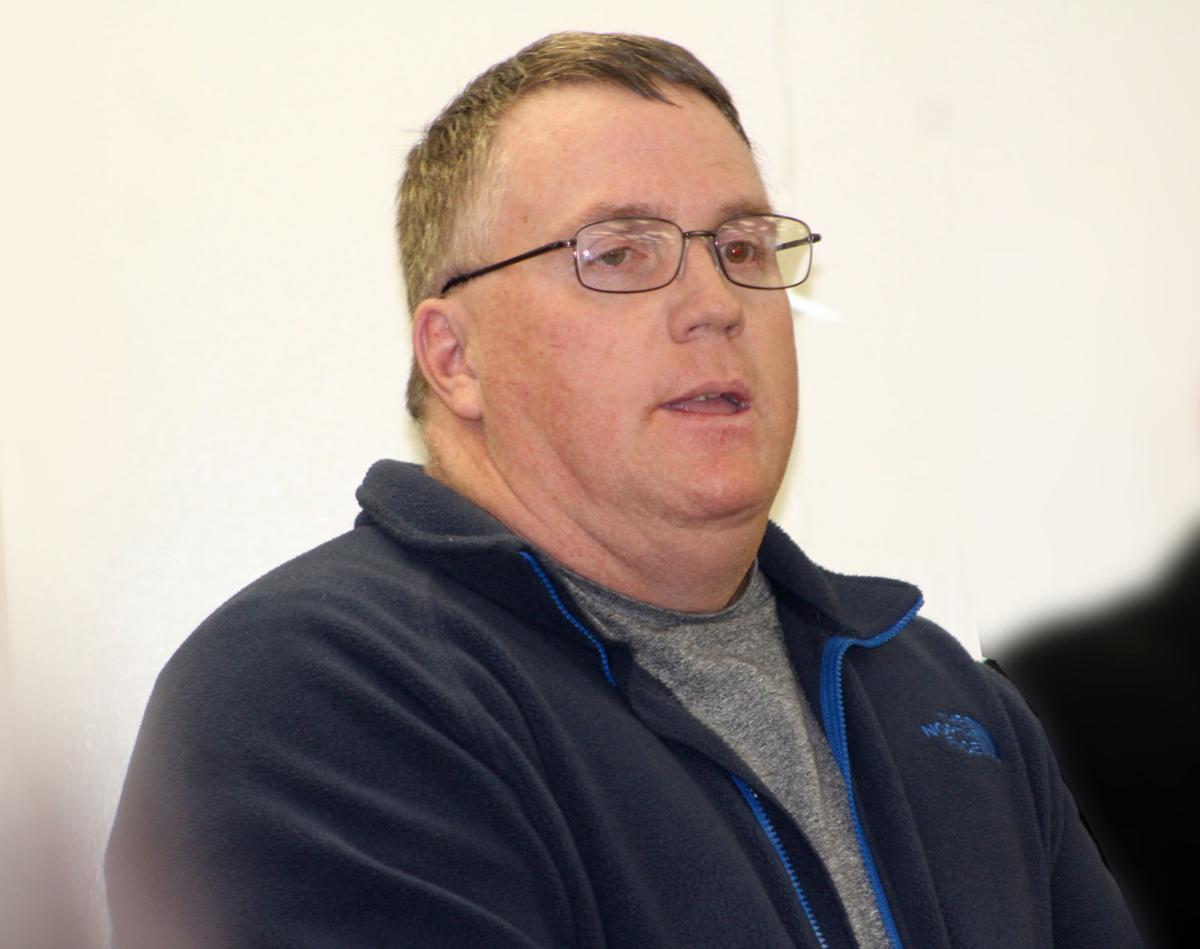 Amy Marshall, wife of Justin Marshall, speaks on behalf of her husband at Thursday’s DuBois Area School Board meeting.

Jim Thompson spoke at Thursday's DuBois Area School Board meeting in support of high school football coach Justin Marshall, who was recently told by district officials that they will be seeking a new coach for next season.

DuBOIS — A roomful of parents, players, community members, some even standing the entire time, waited patiently while the DuBois Area School Board listened to administrators present their yearly district achievements and initiatives.

It was more than an hour until the public comment portion of the meeting came, and they could finally speak in support of football coach Justin Marshall, who was reportedly told recently by district officials that they would be seeking a new coach next season.

Kelly Laird asked the administration and the board “to reinstate our football coach, Justin Marshall.” He talked about the past and the impact Marshall, at the age of 15, had on his 9-year-old son when he was playing his first year of football.

Laird said he got to know Marshall through him playing youth football and his son as a player.

“My son, he’s 32 years old now, he’s successful, he was a successful student athlete here in the DuBois School District. He’s successful in his career. He is a husband and a father. I give that a lot of credit to a 15 year old who took time out and left that impact on my son to carry on through life,” said Laird.

“It’s not about the wins and losses, ladies and gentlemen,” said Laird. “It’s about what that gentlemen left with your children and will (leave) in the future, it’s leading our football program down the road ... give him the opportunity.”

“This isn’t college football. This isn’t the NFL. Three short years, that’s not long enough to go with a program and under the new that’s coming out in 2020, I’m confident, if that’s what you’re looking at, wins and losses, they will come.”

“My boys played for him this year,” said Chris Kovalyak. “Obviously, 0-10 is not what we wanted, and a lot of times you have to make a change after something like that for a lot of reasons, but my understanding, I think you guys already made the right change, and that’s the schedule.”

“I think every week DuBois was an underdog, and I realize when you show up, you play to win, I don’t care who you’re playing, you want to win,” said Kovalyak. “However, when you’re a 4A school and you’re playing 5A schools, 6A schools, 80 percent of the time, which was what the case was this year, it’s tough — physically, mentally, and spiritually. The fact that the kids showed heart ... they were in them at halftime and they were in them well into the third and fourth quarter.”

“As far as Justin as a person, if that’s a criteria, which it probably is, I think he’s a great person,” said Kovalyak. “He’s a phenomenal coach. He’s taught my kids about being men of honor, men of integrity, how to do the right thing and how it’s not an option. You’ve got to do the next right thing at all times. So with that being said, I’d like for you to consider these things that we’re bringing up tonight, in support of Justin.”

Also speaking in support of Marshall was Dave Glass, who said he previously served on the Clearfield Area School Board and understands the workings of a board. He was also elected Clearfield County Commissioner in the November election.

“I know that we in the audience don’t have all the data that you do and I trust that you had your reasons for making your decisions,” said Glass.

At that time, board President Larry Salone interrupted Glass.

“Let me stop you before everybody has a misconception here, because you’ll appreciate this,” said Salone. “The school board does not decide whether a contract is going to be renewed. We only hire when the athletic department recommends a hiring, and comes to us, we can accept it or reject it.

“The decision to not renew a contract is led by the athletic committee, which consists of a couple board members, the school board president, the superintendent, the athletic department, so the board doesn’t have anything to do with not renewing that contract. We want to make sure we cleared that up because we hire and we can say not to hire. We do not terminate contracts.”

“So that’s why we’re all here,” said Glass. “I don’t believe that the record should be the bottom line, especially in high school sports. We already talked about change in schedule. He’s exactly the kind of person I want teaching my kids and coaching my kids. If I had a kid who was in football, I’d be so happy to have Justin coaching. I think it’s going to be a different picture next year. Let’s see how that goes and then make a determination. I think that’s the fair way to do it.”

“I spent the first 11 years of my career here, one of the best friends that I have in the world is Justin. I left a great coaching spot for an elite coach for one person, and he’s sitting there,” said Jim Thompson, as he pointed to Marshall sitting in the front row of the boardroom. “He’s more than a friend, he’s more than a coach. He’s a great mentor, a great role model. Football coaches can affect kids in ways teachers can not. You can reach certain kids that will never be reached in a classroom. Justin, is the guy for that job.”

Justin’s wife, Amy, shared a coach’s wife perspective with the board and asked them to reconsider their decision.

“I’d like to thank all of you very much for your countless time that you put in for our schools and for our community,” Amy Marshall said. “Some of you might be thinking I’d be thankful and happy to have my husband back by not coaching football. I’m here to tell you that this could not be further from the truth. Justin has been living his worst nightmare the past two weeks after being told he would no longer be the DuBois Beavers’ football coach.

“If you know my husband at all, you know that he lives and breathes football, always has and always will. It is deeply ingrained in him and he’s using that love, passion and knowledge in a wonderful way to inspire, mold, guide and teach kids how to play the game fundamentally, intelligently, competitively, respectfully and with grace.”

Amy Marshall said her husband’s impeccable character is an amazing model for the boys who he is entrusted to coach.

“The countless hours that Justin dedicates to this job off the clock is unparalleled to what most people would be willing to do on their own time,” Amy Marshall said. “He’s genuinely happy to do so because everything he does is always in the best interest of the kids and the program. No one wants our program to be more successful than he does.

“If he didn’t feel 100 percent confident that he is the one to help our team through the rough patches and also on the cusp of much greater success on the scoreboard, he wouldn’t be there right now.”

“While the scoreboard may not have reflected great success, I believe these boys will look back on this season realizing how many blessings there were and life lessons that help them persevere and helped mold them into who they’re meant to be,” said Amy Marshall. “The boys love and respect Justin and I want nothing more than to see him do what he loves and is so passionate about for the town in school where we grew up, played for, cheered for, started a family, teach for, our children go to school and are proud to call our home.”

DAHS senior and football player Nick Dilullo said Marshall was not only the coach, he was a leader and a friend.

“He is the best football coach I’ve ever had,” said Dilullo. “He cares about everybody on the team equally and everybody has their shot to play on Friday nights.”

Senior Alex Kovalyak, who has played football for Marshall for the last three years, said, “No, we didn’t think we’d go 0-10, no one ever does and it was hard. But just the way he was able to come in and change a culture, no one ever gave up. Every week we came in with a positive attitude. No one quit.”

Kovalyak also read a letter from a DAHS junior wide receiver who was unable to attend the meeting.

“It’s going to be hard to adapt to a new coaching staff,” the letter said. “Although, we didn’t have the greatest season this past year, Coach Marshall stuck with us the entire year. I believe that he has changed the culture in three years of being coach by getting players to the weight room and putting in work in the off-season. There’s one thing that was needed in the program and that was discipline. I think coach Marshall could work on that and bring DuBois football wins in the upcoming season. So on that note, I’m asking if all of you together can bring Coach Marshall back to the upcoming 2020 football season.”