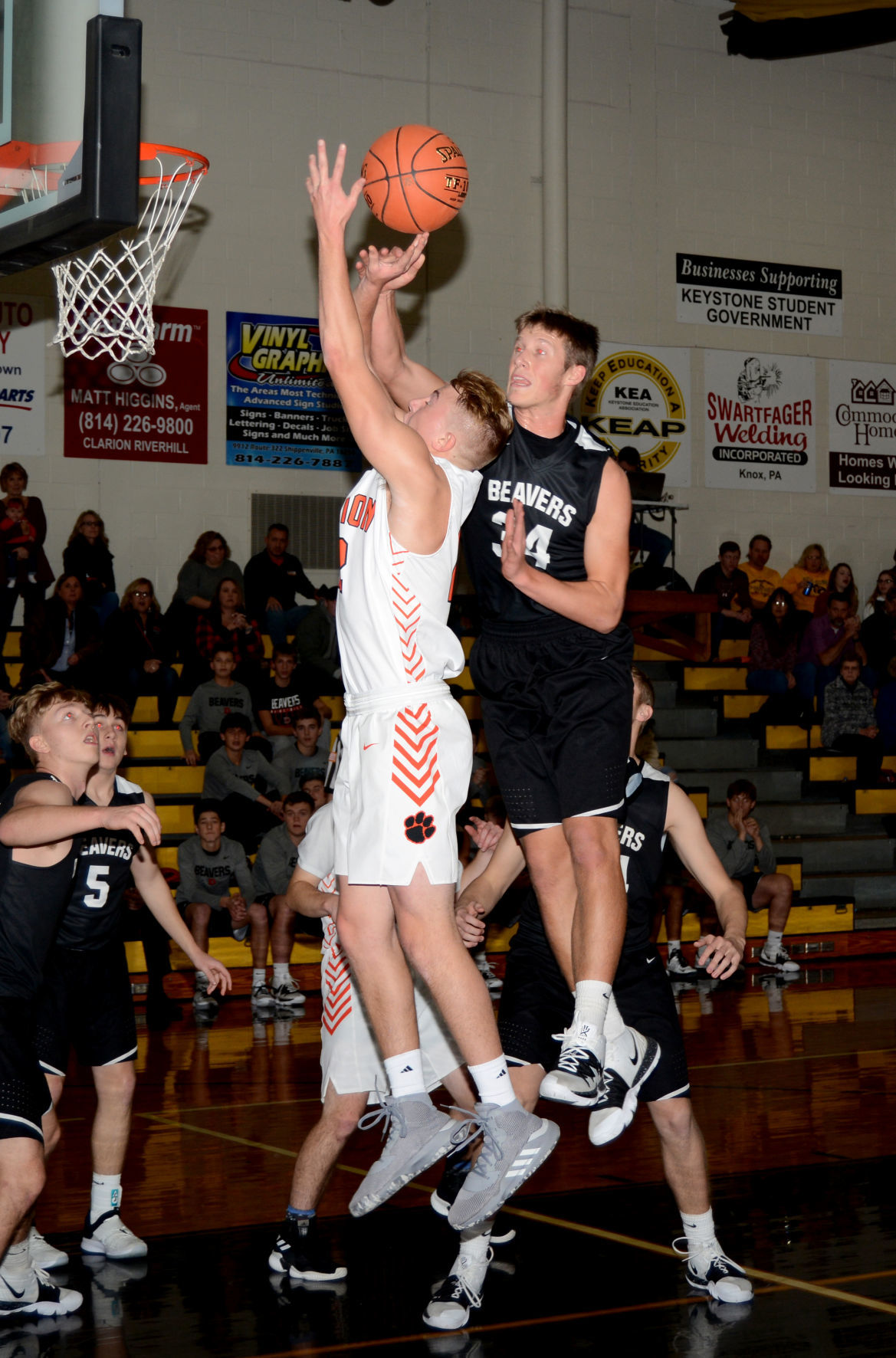 DuBois’ Chase Husted (34) tips the ball away from Clarion’s Hunter Craddock as he goes up for a rebound Friday at the Keytone Tip-Off Tournament. Husted had 23 points and 17 rebounds in a 65-50 win vs. Clarion. He added 17 points Saturday in a 66-45 finals win against St. Marys and was named the tournament’s MVP. 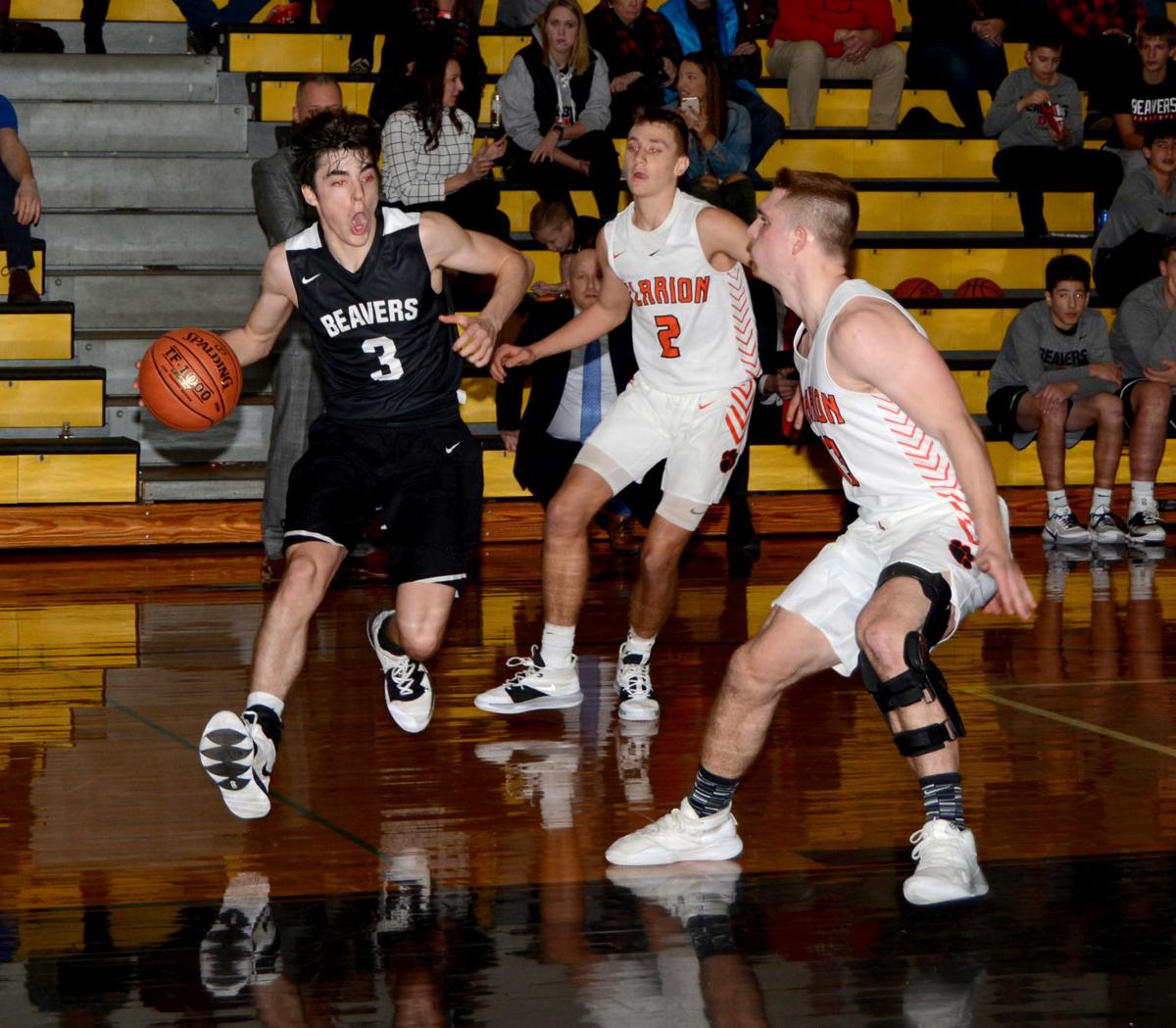 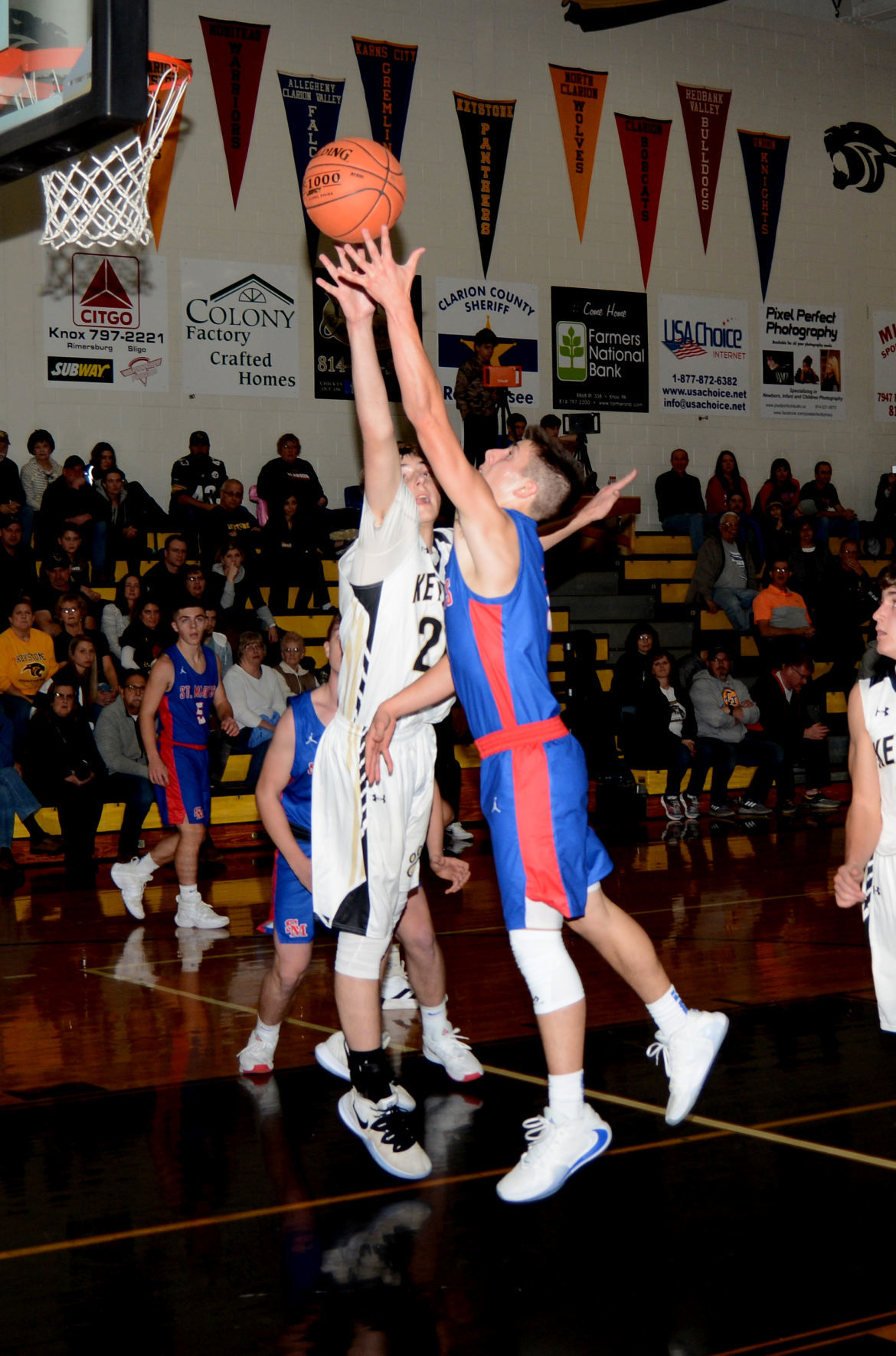 St. Marys’ Cahill Parrish scores inside against Keystone’s Andrew Lauer during fourth-quarter action Friday night at the Keystone Tip-Off Tournament. Parrish scored 25 points in a 49-44 overtime victory. He was held to just eight points Saturday in a 66-45 loss to DuBois in the finals.

DuBois’ Chase Husted (34) tips the ball away from Clarion’s Hunter Craddock as he goes up for a rebound Friday at the Keytone Tip-Off Tournament. Husted had 23 points and 17 rebounds in a 65-50 win vs. Clarion. He added 17 points Saturday in a 66-45 finals win against St. Marys and was named the tournament’s MVP.

St. Marys’ Cahill Parrish scores inside against Keystone’s Andrew Lauer during fourth-quarter action Friday night at the Keystone Tip-Off Tournament. Parrish scored 25 points in a 49-44 overtime victory. He was held to just eight points Saturday in a 66-45 loss to DuBois in the finals.

KNOX — If you’re an annual attendee of the Keystone Boys Basketball Tip-Off Tournament, you may have left the gym with a feeling of deja vu Friday night as for the third straight year DuBois and St. Marys won their openers to reach the championship game.

However, the Beavers and Dutchmen reached the finals in completely different ways.

DuBois led most of the way in a 65-50 win against Clarion Friday night, while St. Marys ground out a hard-fought 49-44 comeback victory in overtime vs. host Keystone in a defensive struggle that saw the teams combine for 48 turnovers (Keystone 29, St. Marys 19).

DuBois went on to capture its third straight tournament title over the Dutchmen, coming away with a 66-45 victory Saturday night.

The Beavers jumped out to a 15-6 lead after one quarter and pushed that advantage to 12 points (32-20) at the half. That deficit proved too much for St. Marys to overcome as DuBois extended its lead in the second half en route to the 21-point victory.

Lindholm also hit three treys as DuBois finished with eight triples to help offset a 10-for-20 night at the foul line.

Felix was named the All-Tournament, with his defense playing a big role in that. A night after holding Clarion’s Calvin german in check, he helped do the same to St. marys’ Cahill Parrish, who had just eight points after scoring 25 vs. Keystone on Friday.

The game was in stark contrast to last year’s finals, where DuBois rallied for a 65-63 win in overtime. The Beavers also pulled out a tight 51-47 victory in the finals two years ago.

Here is a closer look at how the Beavers and Dutchmen reached the finals:

DuBois and its new-look starting lineup opened its season with a bang Friday, getting a huge night from senior Chase Husted while getting strong play from a large group of players either making their first varisty starts or logging their first significant minutes at that level.

Husted, who missed last year’s tournament due to illness, scored a game-high 23 points while pulling down 17 rebounds. He recorded a double-double alone in the second half (11 points, 10 rebounds).

Junior Jordin Sommers came of the bench and joined Husted in double figures with 11 points, including three of his team’s six 3-pointers. Sommers drained back-to-back treys just after entering the game midway through the first quarter, sparking a 16-3 run that turned a one-point deficit (5-4) into a 12-point lead (20-8) after eight minutes.

It was all DuBois from there, as the Beavers pushed their lead to as many as 21 points in the second half before coming away with the 15-point win.

Junior Nick Felix, a DCC transfer playing in his first game at DuBois, added nine points while shutting down Clarion standout Calvin German most of the night on defense.

German, who averaged 19 points a game last year (7th best in District 9), managed just six through three quarters before scoring nine in the final five minutes after the game was out of hand to finish with 15.

Lindholm played a big role in the Beavers’ first-quarter run that got them the lead for good. He hit back-to-back 3-pointers after Sommers did the same, as both players had eight points in that 16-3 spurt.

The duo helped form the strong inside-out game DuBois had in the win, with Husted and Orzechowski powering that inside game. After Sommers and Lindholm dominated the opening eight minutes, Husted got rolling in the second quarter as he netted 10 of his team’s 19 points to help give the Beavers a 15-point halftime advantage (49-24).

DuBois maintained that lead in the second half, pushing the lead to 21 points (48-27) thanks to a 9-5 spurt to start the third quarter. Farrell opened the second half with a trey, while Felix, Orzechowski and Husted each had hoops in that early.

That third-quarter spurt all but put the game away, as the teams eventually played a 26-26 draw over the final two quarters.

German’s big fourth quarter saw him finish in double figures along with teammate Josh Craig, who had eight of his 10 points in the second quarter. Hunter Craddock added nine points, while Nick Frederick and Skylar Rhoades each added six.

“Everything started on the defensive end of the floor, and I thought Nick Felix did a tremendous job on Cal German,” said Beavers coach Dave Bennett. “That was probably a big difference in the game how well he played on defense. That was the plan (shut down German) because he’s a great player, and we were pretty played him one-on-one with how Felix played.

“Then, Jordin Sommers ... he spent much of the early season practices injured, so we only got him back this week. He gave us a huge spark of the bench and once we started to hit a few shots we were able to get the big boys some touches. Chase (Husted) did a nice job from there and Orzechowski did a great job as well.

“Brady Woodward gave us some good minutes even though he was in foul trouble, as did some of our other guards in what was the first significant minutes (at varsity level) for some of those guys.”

Turnovers and shooting woes plagued both teams in the second game Friday, but it was St. Marys that came out with the hot hand at the start.

The Dutchmen jumped out to an early 8-4 lead, getting six points from senoir Cahill Parrish and basket from fellow senior Bryce Walker. Parrish eventually led all players with 25 points as he played a huge role down the stretch in St. Marys’ comeback.

However, he and the rest of the Dutchmen went cold in the opening quarter after that strong start as Keystone ended the period on a 6-0 spurt — holding St. Marys scoreless for the final 4:14 — to grab a 10-8 lead. The teams combined for 13 first-quarter turnovers.

The second quarter went back-and-fourth before the Panthers took a 22-19 lead into the break on strength of four straight points by Colin Say to end the half.

The third quarter proved to be more of the same.

Keystone managed to push its lead to six points (31-25) on a 3-pointer by Brandon Pierce with 1:20 left in the third. St. Marys quickly countered with a hoop from Walker as the Panthers took a 31-27 advantage to the fourth.

A pair of treys by Pierce in the first 1:11 of the final quarter helped push the Keystone lead to eight points at 37-29 before the Dutch rallied.

St. Marys quickly got back into the game with seven straight points. A 3-pointer by Walker sparked that spurt before Parrish scored twice — the second time off a turnover — to make it a one-point game at 37-36 with 4:43 to play.

Parrish scored the Dutchmen’s final nine points, including a hoop off a steal with with 49 seconds left to finally pull St. Marys even at 41-41.

Keystone tried to hold the ball for the final shot but was called for a travel wth 4.9 seconds left during a fight for a loose ball under its own basket.

That gave St. Marys a chance to win the game, momentarily it appeared they had when Parrish rushed the ball up the court and banked in a 3-pointer on an off-balance shot with nine-tenths of a second the clock.

However, a foul had been called on the floor on a Keystone defender before the shot as the game went to overtime.

Keystone’s Troy Johnson and St. Marys’ Luke Lasko traded baskets to open OT before Panther Andrew Lauer went 1-of-2 at the foull ine to put his team back 44-43 with 2:40 remaining.

The Panthers didn’t score again though, as Parrish recorded the game’s final six points to give his team the victory. Parrish scored a pair of hoops just 26 seconds apart to put the Dutch up 47-44 before hitting a pair of free throws with 25.8 seconds left to put the game away.

Parrish had 15 of his game-high 25 points in the fourth quarter and overtime. Lasko added eight points for the Dutch, while Walker had seven.

“Our defense bailed us out tonight,” said St. Marys coach Shad Boschert. “Obviously, I’m not very pleased with how we played for most of the game. Offensively, we were not very patient ... guys coming out of their spots early and not doing what we were looking for. Buckets were falling for us either. But, credit to Keystone. They were were relentless defensively came to play.

“Cahill and Nick made some plays late for us, and they have been there before. That was huge was for us. It really wasn’t anything to me (to be down). They weren’t shaken or rattled. Cahill was doing a nice job all night getting into the paint, shots just weren’t falling for him. That turnaround jumper is his thing, and he just didn’t have it tonight.

‘With the schedule we have, you can’t afford to give up (lose) close games like that one. You have to come out on top, and that’s what we did tonight. We grinded one out.”

Pierce and Lauer led Keystone with nine points each.