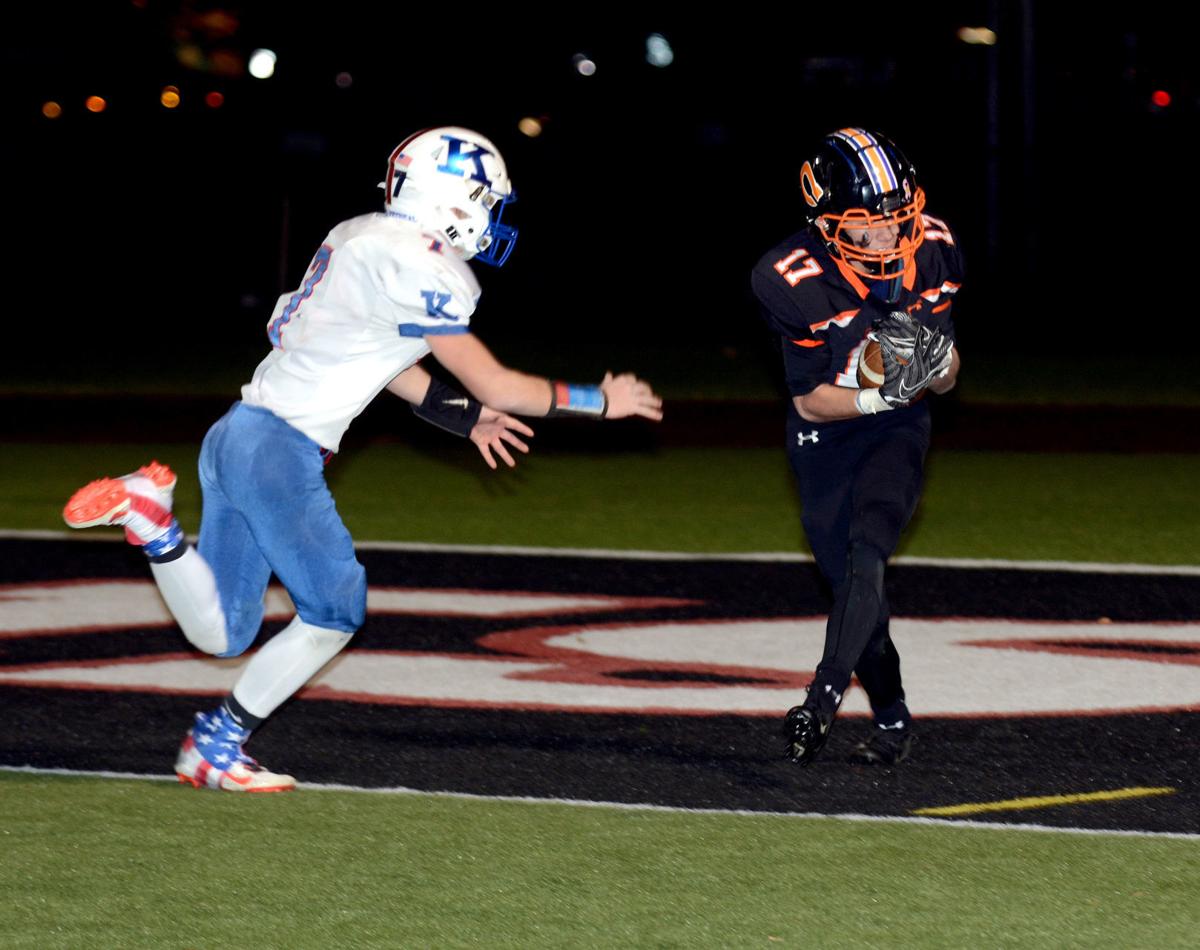 Clarion’s Ethan Burford (17) hauls in a 32-yard touchdown pass from Clavin German in the end zone behind Kane’s Harley Morris (7) with 1:04 left in the first half Saturday in a District 9 Class 2A semifinal game. Burford made five catches for 176 yards in the Bobcats’ 27-13 victory. 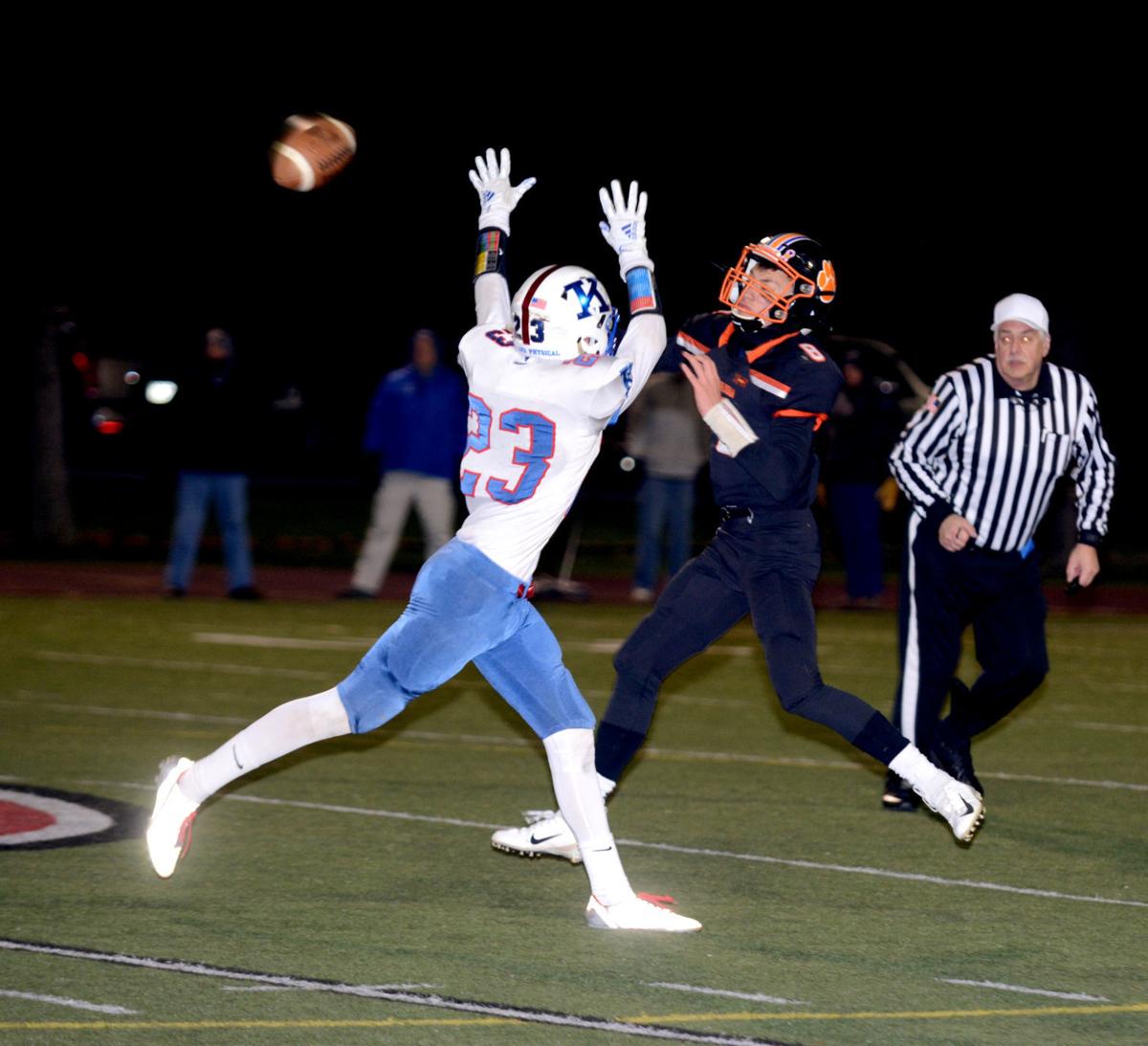 Clarion quarterback Calvin German (8) slips a pass just over the raised arms of Kane’s Ricky Zampogna (23) that teammate Cutter Boggess hauled in for a 9-yard gain. German threw for 304 yards with three touchdowns and one interception in a 27-13 victory. Clarion’s Kyle Bottaro (11) sacks Kane quarterback Harley Morris (7) for a 5-yard loss during third-quarter action Saturday night. The sack was one of three in the game for the Bobcats. 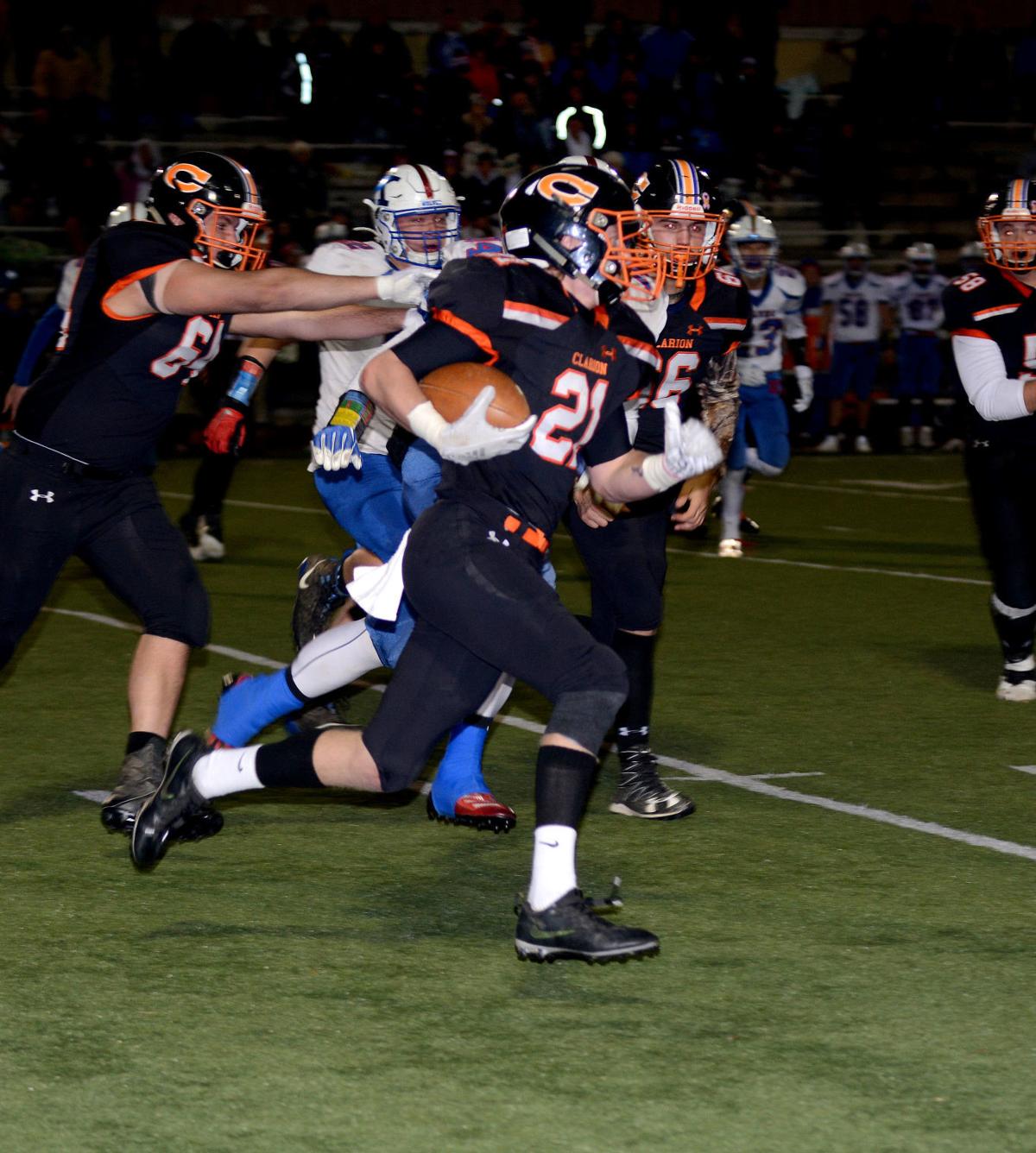 Clarion's Cutter Boggess (21) finds room to run on the outside Saturday night against Kane in a District 9 Class A semifinal game. Boggess accounted for 171 total yards (76 rushing, 95 receiving) in a 27-13 victory.

Clarion’s Ethan Burford (17) hauls in a 32-yard touchdown pass from Clavin German in the end zone behind Kane’s Harley Morris (7) with 1:04 left in the first half Saturday in a District 9 Class 2A semifinal game. Burford made five catches for 176 yards in the Bobcats’ 27-13 victory.

Clarion quarterback Calvin German (8) slips a pass just over the raised arms of Kane’s Ricky Zampogna (23) that teammate Cutter Boggess hauled in for a 9-yard gain. German threw for 304 yards with three touchdowns and one interception in a 27-13 victory.

Clarion’s Kyle Bottaro (11) sacks Kane quarterback Harley Morris (7) for a 5-yard loss during third-quarter action Saturday night. The sack was one of three in the game for the Bobcats.

Clarion's Cutter Boggess (21) finds room to run on the outside Saturday night against Kane in a District 9 Class A semifinal game. Boggess accounted for 171 total yards (76 rushing, 95 receiving) in a 27-13 victory.

DuBOIS — Clarion used a stifling defense and a balanced offensive attack that got several big plays through the air to knock off Kane, 27-13, Saturday night in a District 9 Class 2A semifinal game at DuBois’ EJ Mansell Stadium.

Kane, the sixth seed, came in fresh off a 28-22 upset of third-seeded Brookville a week ago — a game in which the Wolves racked up 392 yards of offense while avenging a 33-14 loss to the Raiders three weeks prior.

However, the Wolves offense was stuck in neutral — and at times in reverse — Saturday night as Clarion held Kane to just 61 total yards, including a huge 226-9 advantage in the first half.

Despite that large disparity in first-half yards, Kane was right in the game at the break (14-13) thanks to two touchdowns on returns. The first of those, a 75-yard punt return by Jake Alcorn, actually gave the Wolves a 7-0 lead early in the first quarter.

Kane held that 7-0 advantage past the midway point of the second quarter before the teams combined to score three times in the final five minutes of the half.

Clarion pulled even on a 1-yard touchdown run by Austin Newcomb with 4:58 left in the second quarter. Newcomb, who took a big hit a couple plays earlier, never returned to the game following the score.

The Bobcat defense then forced a quick three-and-out, but a booming 49-yard punt by Teddy Race pinned Clarion at its one 1-yard line.

A pass interference penalty on the first play gave Clarion some breathing room, but disaster struck the Bobcats on the ensuing play as Alcorn picked off Clarion quarterback Calvin German and returned it 24 yards to paydirt. Kane’s extra point hit the upright, as the Wolves led 13-7.

German and Bobcats answered right back with a quick 5-play, 80-yard scoring drive that gave Clarion the lead for good. German hit Cutter Boggess for 48 yards on third-and-5 before finding Ethan Burford behind the defense for a 32-yard touchdown two plays later.

Beau Verdill’s extra point put Clarion up 14-13, and the Bobcats never relinquished it.

German hit Burford in stride for a 63-yard scoring strike on the fifth play of the second half, and it was all Bobcats from there as Clarion’s defense limited Kane to the same number of second-half first downs and possessions (3).

The Clarion offense chewed up the clock after the break, putting together two drives in the fourth quarter that accounted for 10:50 of the 12 minutes.

The first of those drives, which lasted 11 plays, was capped by 1-yard TD catch by Hunter Craddock that put the Bobcats up two scores (27-13) and all but sealed their victory.

Clarion then forced another quick three-and-out before running off the final 6:29 of the game with a 13-play drive that culminated in a pair of kneel downs after the Bobcats reached the Kane 5.

German overcame the first-half pick six to put together a big night, completing 14 of 23 passes for 304 yards and three touchdowns. Burford hauled in five of those balls for 176 yards and a pair of touchdowns.

“What a tough start there, but I have to give our kids a lot of credit with the way they hung in there and stayed disciplined,” said Clarion coach Larry Wiser. “I’m really proud of the defense and the effort they made tonight. And offensively, after some early errors, they came back.

“Calvin (German), there were a lot of reasons he could have went in the tank, but he stayed positive and did a great job hitting Ethan (Burford) as he always seems to do. He got us back into the game with a couple of those key passes.

Cutter Boggess, what do you say. He’s a guy who can play almost any position. I also have to give a lot of credit to our offensive line tonight too. We also have some young backs come in there in the second half to run the ball, and (Coach) Dave (Eggleton) made some great adjustments.”

The teams traded punts to open the night, with Alcorn returning the second of those 75 yards to give Kane the early lead 7-0 lead after Aaron Hottel booted the extra point.

Clarion tried to answer back, putting together a 15-play drive that saw the Bobcats march from their own 12 down to the Kane 21. Burford had a key 30-yard catch on third-and-8, while Newcomb added a 13-yard run.

However, Kane eventually forced Clarion to turn the ball over on downs after Race came up with a big tackle for loss late in the drive.

Kane piked up its only two first downs of the opening half on its ensuing drive but was again forced to punt. a 39-yard kick by Race pinned Clarion at its own 9 early in the second quarter.

Newcomb promptly ripped off runs of 16 and 10 yards, sparking a 12-play, 91-yard touchdown drive. Burford had the big play of the series, a 37-yard catch that put Clarion in the red zone.

Newcomb scored from a yard out on third down six plays later, with Verdill’s PAT making it 7-7 with 4:58 left in the half. The teams then traded scores before the half on Alcorn’s pick six and Burford’s first TD grab of the night.

Clarion carried that momentum over into the second half as Burford’s second touchdown catch gave the Bobcats a seven-point lead at 20-13 just 2:25 into the third quarter.

Kane picked up one first down on following possession but were again forced to punt. Clarion went right back to the air, as German hit Hunter Craddock down the right seam for 31 yards down to the Kane 32.

Clarion looked to be in business again, but a fumble by Shall on the next play doomed the drive.

Kane looked to get something started on offense, picking up a pair of first downs to get out to its own 39. However, a sack by Clarion’s Kyle Bottaro slowed down the Wolves, who later decided to punt on fourth-and-two at their own 46. Bottaro returned to the lineup Saturday after missing several weeks of action.

Clarion got the ball at its own 20, with Boggess ripping off a 14-yard run on the final play of the third quarter. That kicked off an 80-yard scoring drive that saw the Bobcats dominate time possession in the fourth quarter.

Shall had three carries for 29 yards on Clarion’s final touchdown drive of the night, while Boggess added an 11-yard run and 24-yard catch that set up Craddock’s TD grab that put the game away.

Clarion will now battle Ridgway for the District 9 Class 2A title Saturday night, back at DuBois at 6 p.m. The Elkers blasted the Bobcats, 42-0, in Ridgway in Week 6. Newcomb didn’t play in that game, and his status may be in question again after leaving early Saturday night.

“We’ll give our kids a couple days off here and get back to work on Tuesday,” said Wiser. “The kids are looking forward to getting Ridgway again, but I thought they were good about not losing sight today.

“I don’t think they ever looked past Kane. I was impressed with Kane last week against Brookville. They play with a lot heart and are tough on both sides of the ball, and their special teams tonight — their punter put is some tough situations a couple times.”

BIDS Vehicle is sold “As Is” 2006 Chevy Impala Title

MEETING NOTICE The Brady Township Board of Supervisors will hold