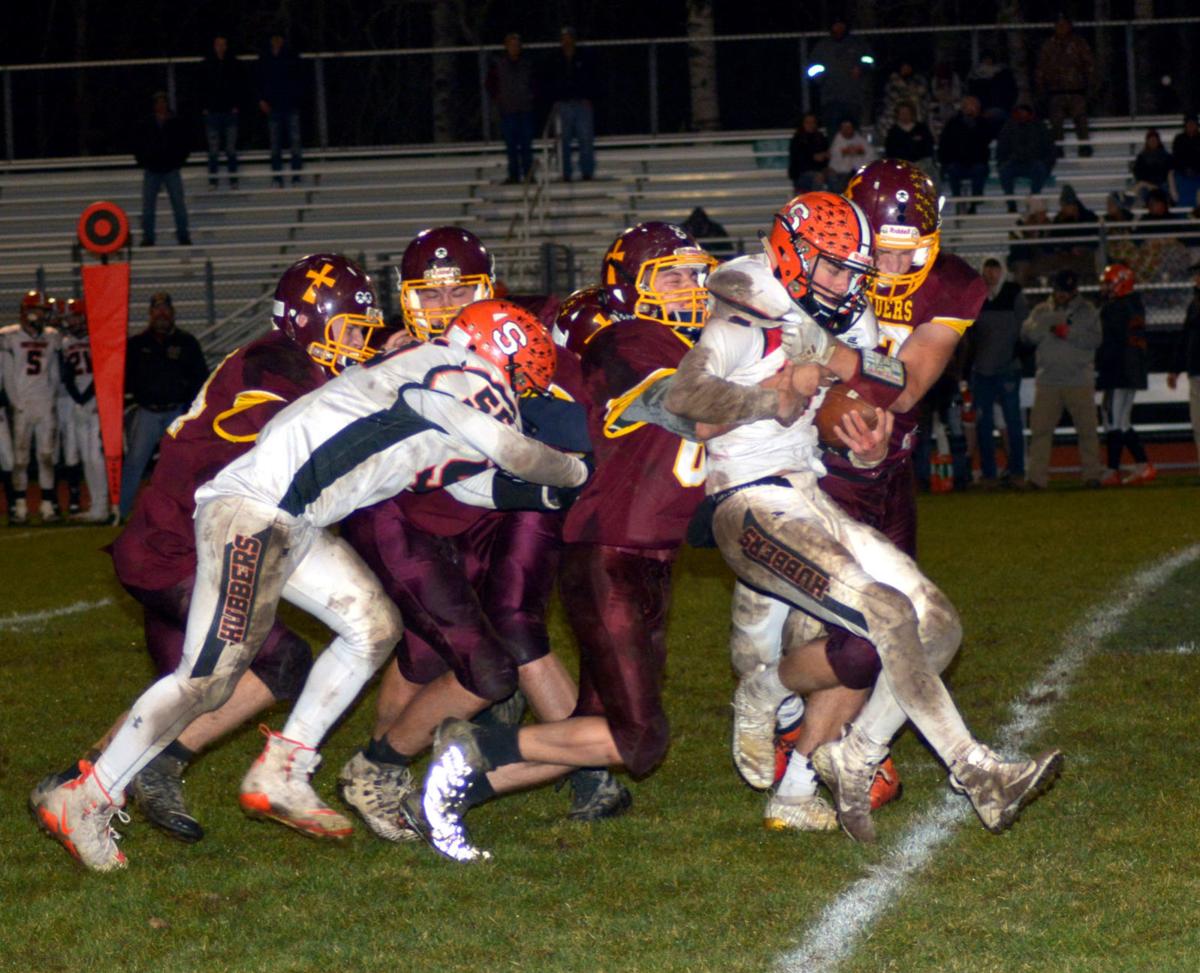 Elk County Catholic’s Jake Parrish, middle, and Leo Gregory, back right, blow up Smethport quarterback Noah Lent in the backfield for a loss of yardage during the second quarter of Friday’s game. The Hubbers won 28-6 behind four touchdown passes by Lent. 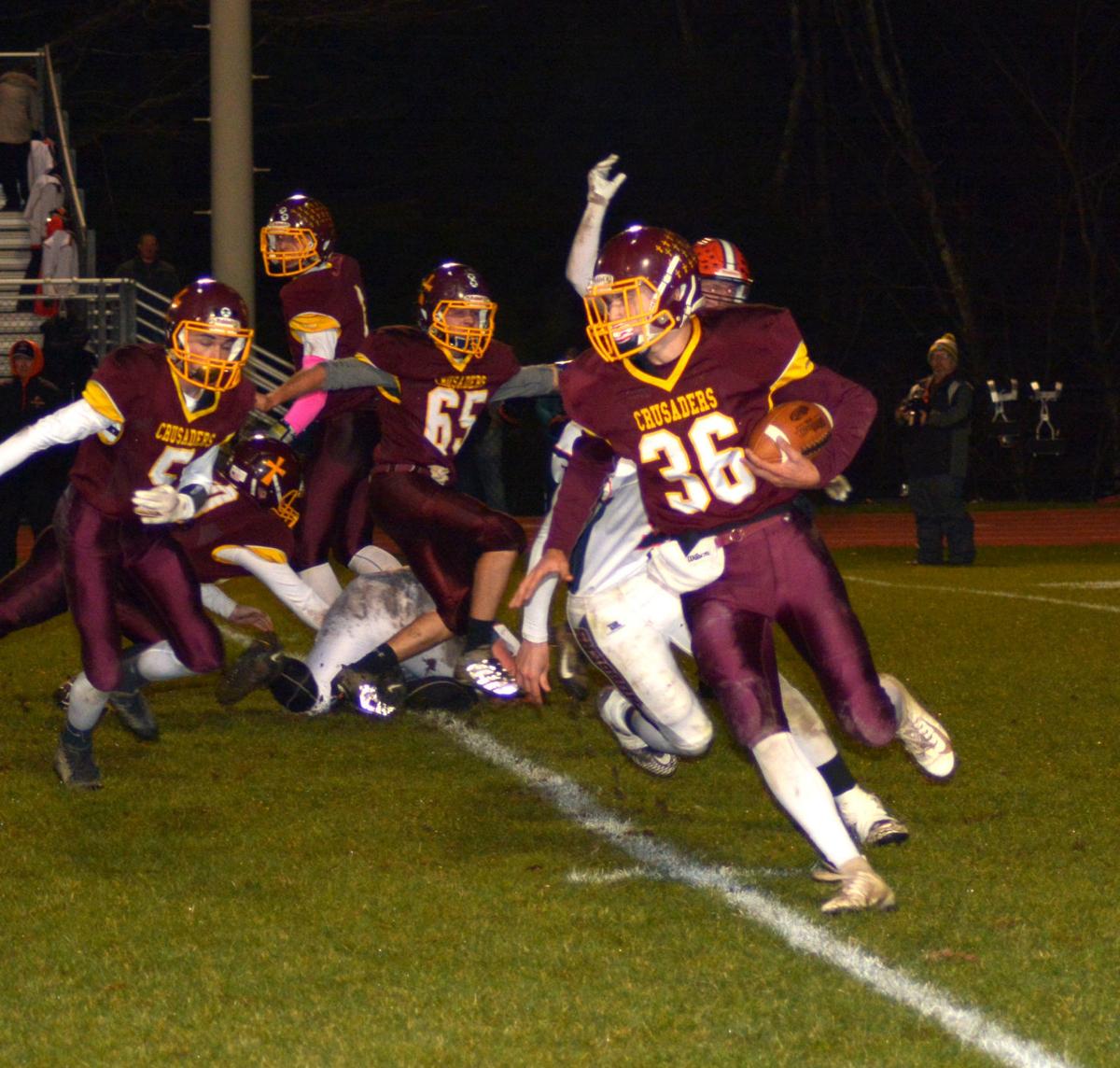 Elk County Catholic’s John Wittman (36) gets around the edge on an 11-yard carry during the first quarter of Friday’s game against Smethport. Wittman carried the ball five times for 21 yards and also caught three passes for 20 yards and a touchdown in a 28-6 loss. 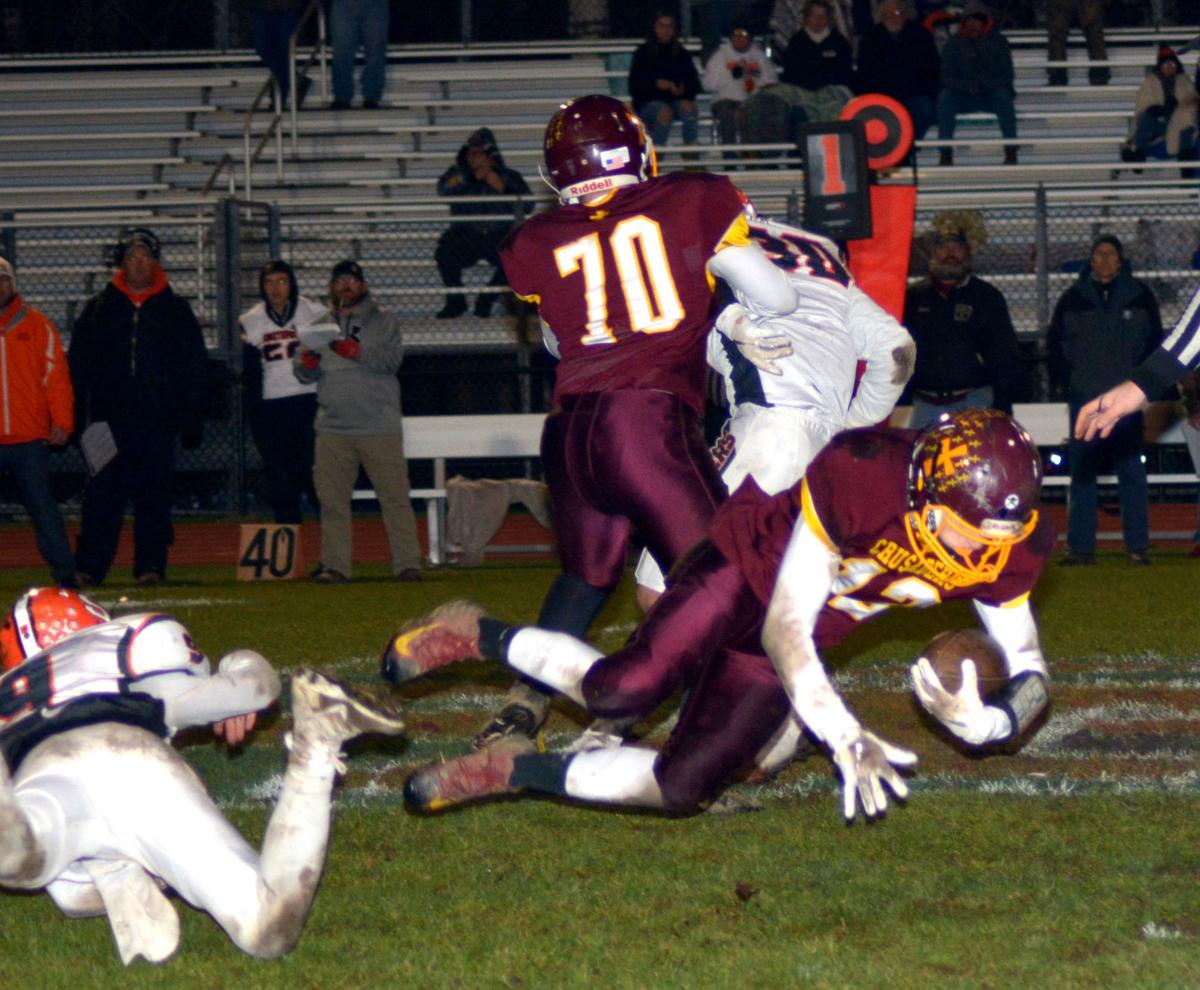 Elk County Catholic's Sam Kaul dives forward for extra yardage on a carry during the second quarter of Friday's game as Alex Smith (70) provides a block on a Smethport defender on the play. The Crusaders lost 28-6.

Elk County Catholic’s Jake Parrish, middle, and Leo Gregory, back right, blow up Smethport quarterback Noah Lent in the backfield for a loss of yardage during the second quarter of Friday’s game. The Hubbers won 28-6 behind four touchdown passes by Lent.

Elk County Catholic’s John Wittman (36) gets around the edge on an 11-yard carry during the first quarter of Friday’s game against Smethport. Wittman carried the ball five times for 21 yards and also caught three passes for 20 yards and a touchdown in a 28-6 loss.

Elk County Catholic's Sam Kaul dives forward for extra yardage on a carry during the second quarter of Friday's game as Alex Smith (70) provides a block on a Smethport defender on the play. The Crusaders lost 28-6.

ST. MARYS — What a difference a week can make.

In the closing week of the regular season Elk County Catholic ran all over Smethport on its way to a dominant 18-0 road victory on Oct. 25 which earned it the fourth seed in the District 9 Class A playoffs and dropped the Hubbers to the fifth seed.

The script was flipped Friday night at Dutch Country Stadium in the quarterfinals of the district playoffs, as ECC (5-5) was unable to get anything going offensively as it saw its season come to an end with a 28-6 defeat.

“Only one team gets to walk off the field a champion in the end and hats off to Smethport, they showed up to play,” ECC head coach Tony Gerg said. “This was not our best showing, we did not show up mentally ready and I’m not really sure why.”

“As coaches we’ll take a look at it, we had a fantastic week of practice and sometimes you just don’t know and mentally we just weren’t there today.”

Sam Kaul spearheaded that rushing attack in Week 9, as this time out the Hubbers limited him to just nine yards on six carries, as the Crusader offense managed just 47 yards on 25 carries on the night and finished with only 105 yards of total offense along with three turnovers.

On the other side, Smethport (6-4) quarterback Noah Lent, who entered the game with just seven touchdowns on the season, found the end zone on four of his nine completions on the night while also outgunning ECC on his own on the ground with 114 yards on 24 totes.

After being shut out in the previous matchup, the Hubbers’ offense did not take long to get on the board Friday night, as they took the opening kick and methodically worked their way down the field for a touchdown just over three minutes in.

Lent set Smethport up in Crusader territory with a 22-yard scamper on a read-option keeper as the away side later faced a 3rd-and-11 from the 33 as Lent dropped back to pass.

The quarterback was pressured as he rolled out to his right towards the home sideline and was forced to throw the ball away as it appeared the Hubbers would face a fourth and long.

Instead, a holding penalty on the defense moved them up 10 yards and a 3-yard plunge up the middle by Bryent Johnson gave Smethport a first down.

Two plays later, Lent connected with Braedon Johnson along the near sideline, as the receiver made a pair of nice moves to work his way through the ECC defense and into the end zone.

A failed two-point conversion run left the score at 6-0 at the 8:56 mark of the opening quarter.

After the two sides combined for three unsuccessful drives, the Crusaders’ were forced to punt for the second time in the early going as Leo Gregory got off a strong punt that backed Braedon Johnson up to his own 12-yard line.

The returner took in the punt and burst down the near sideline for a 73-yard return to set his team’s offense up inside the red zone late in the first quarter.

Three plays later Smethport found the end zone on the opening play of the second quarter when lent rolled out to his right and found Braedon Johnson in the end zone for a 13-yard score on 3rd-and-8 for their second touchdown connection of the night as Lent tacked on the two-point run.

The Hubbers’ offense quickly found itself back out on the field after ECC’s second play of the ensuing drive ended with a fumble recovered by Michael Tanner.

Smethport needed just three plays to capitalize as a 23-yard run by Lent set up a 27-yard touchdown pass from Lent to Bryent Johnson just 2:26 after its previous score as the visitors quickly stretched the lead to 22-0 after a two-point run by Braedon Johnson.

The Hubbers took that lead into the half as they outgained the home side 198-53 in the opening 24 minutes of play.

Neither team was able to get much going offensively in the third quarter as the score remained the same heading into the final quarter of play.

Smethport opened the fourth facing a 3rd-and-24 after a holding penalty, as a 15-yard run by Braedon Johnson pushed it across midfield and set up fourth down.

The Hubbers then looked to punt, but a low snap forced the punter to fall on the ball for a turnover on downs back at their own 44-yard line.

The play seemed to spark the ECC offense, as a 19-yard pitch and catch between Mason McAllister and Leo Gregory set up its first score of the night as McAllister found a wide open John Wittman in the end zone for a 15-yard touchdown pass.

The extra point drifted wide left as the Crusaders trimmed the deficit to 22-6 with 8:09 left to play.

On the ensuing kickoff Stephen Bobby laid down a near perfect onside kick towards the ECC bench as the ball slowly rolled to the 10-yard mark as a pair of Crusaders waited to avoid an illegal touching penalty.

As the ball crossed over the 10-yard threshold, the duo looked to jump on the ball, but before they could do so Adenn Stevens pounced on the ball to make the recovery for Smethport.

The Crusader defense came up big and forced a three-and-out, as the offense looked to trim the deficit to one score, but instead a deep ball by McAllister fell into the hands of a diving Bryent Johnson for an interception.

Bryent Johnson then delivered the final dagger on the ensuing play from his team’s own 27-yard line, as he broke free down the near sideline for a 39-yard gain as a personal foul face mask penalty tacked on 15 yards on the end of the play.

Four plays later Lent found Bryent Johnson in the end zone for their second scoring connection of the game, this time on a 16-yard pass, as Lent’s two point pass was intercepted by McAllister with 3:42 left to play to bring the final score to 28-6.

The game was the final one in a Crusader uniform for the team’s five seniors in Stephen Bobby, Anthony Gerg, Jared Emert, Gregory and Wittman as Gerg noted it is hard to see the group go out.

“Especially when one of the seniors is your own kid it’s a tough deal,” Gerg said. “Like most fathers you wait your whole life to get to this point and then in a flash its over with.”

“This is what makes the game special, you only have a short opportunity to do it then it’s gone.”

Smethport will now take on top-seeded Coudersport in the semifinals next week in a rematch of last season’s district title game, one in which the Falcons came out on top.