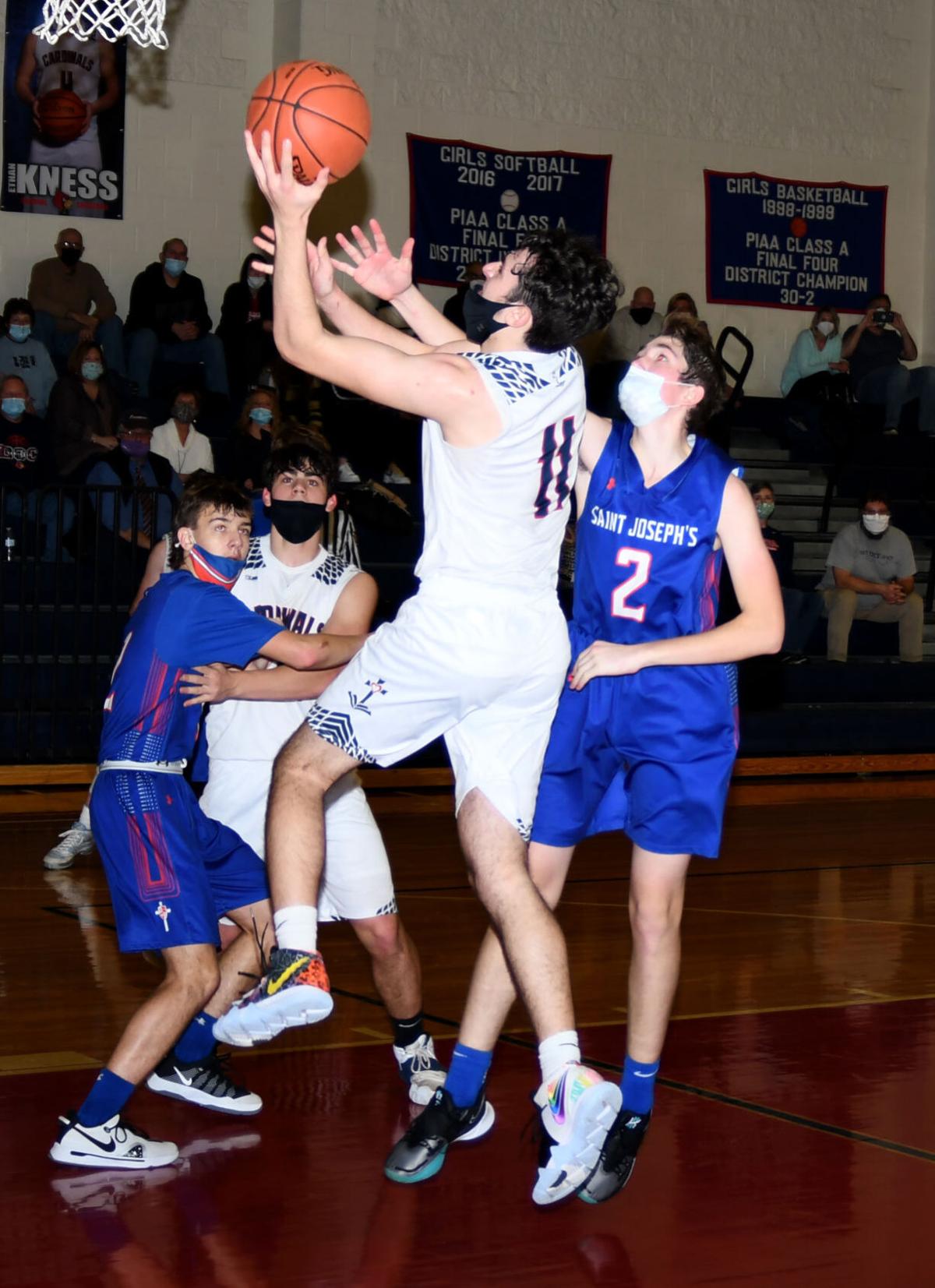 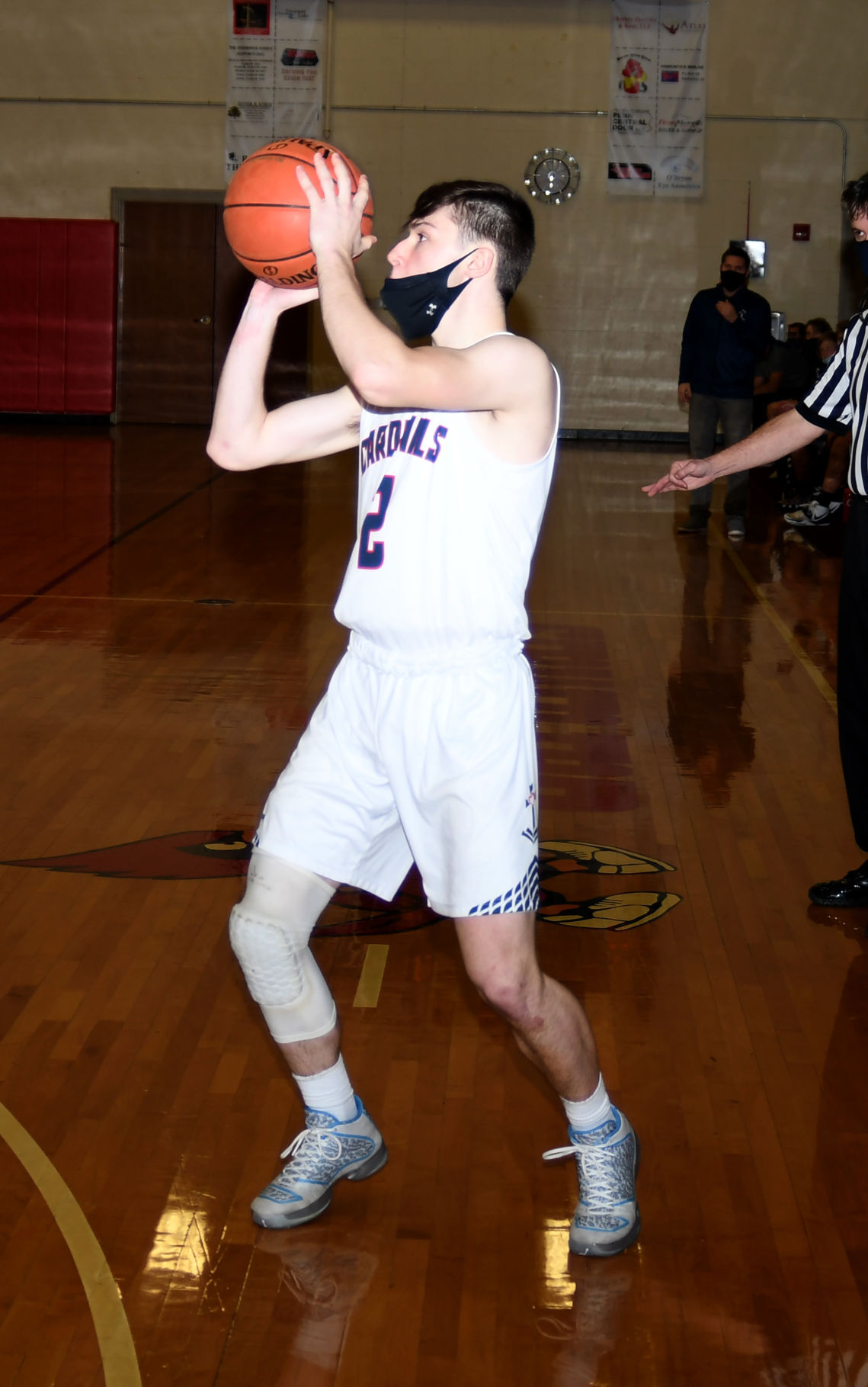 DuBois Central Catholic’s Damon Foster hits one of his two first-quarter 3-pointers Friday night against St. Joseph’s. Foster scored 12 points, all in the first half. 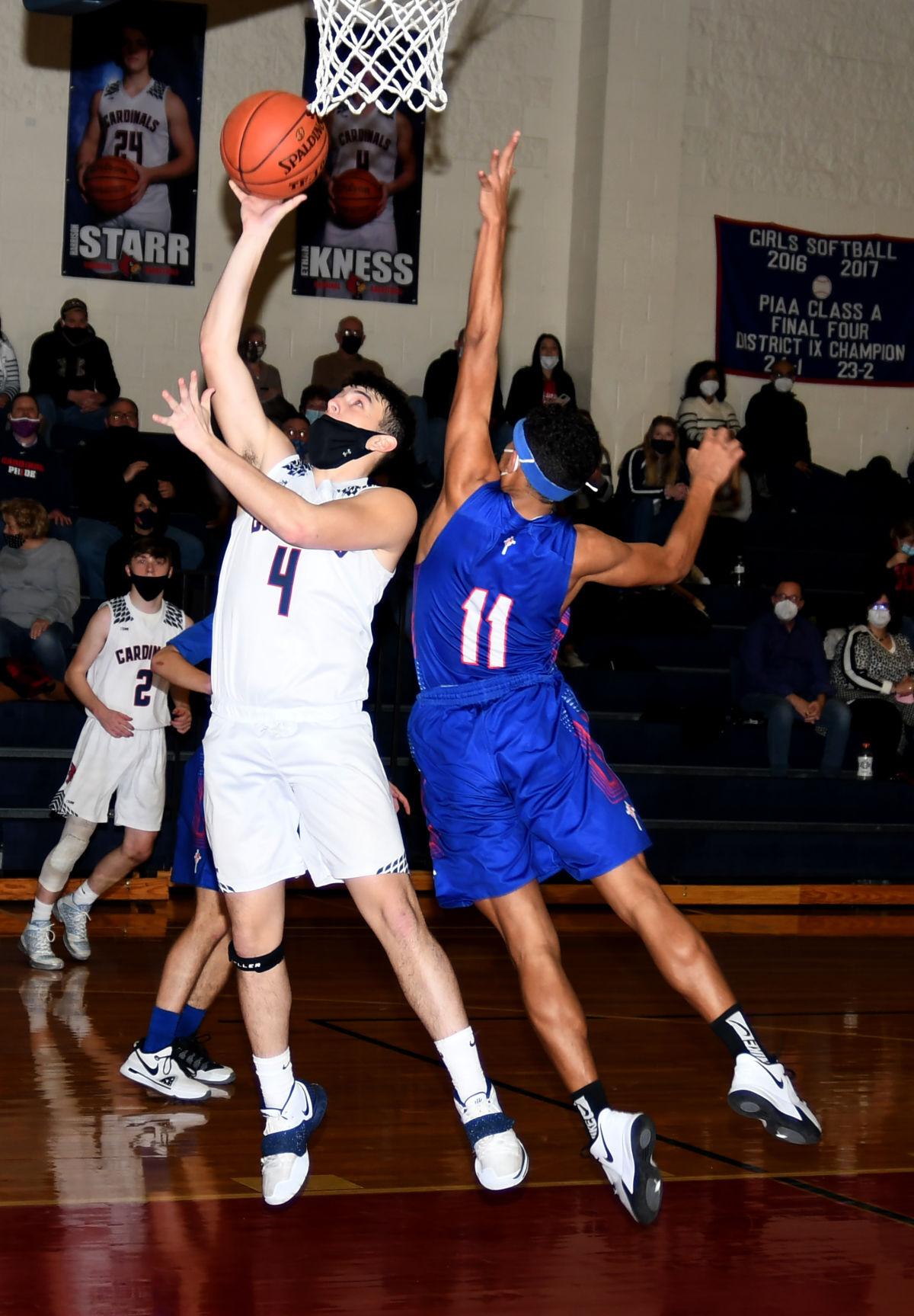 DuBois Central Catholic’s Damon Foster hits one of his two first-quarter 3-pointers Friday night against St. Joseph’s. Foster scored 12 points, all in the first half.

DuBOIS — Playing its third game of the week, the DuBois Central Catholic boys basketball team put together its best all-around performance of those games Friday night to come away with a 63-34 mercy-rule victory against visiting St. Joseph’s Catholic Academy.

And, as good as DCC played on offense — putting four different players in double figures — the dominant effort started on the defensive end where the Cardinals shutdown St. Joe’s Brendan Scanlon.

The Wolfpack senior entered the matchup having scored 75 points in St. Joe’s first three games (25.0 ppg), but Scanlon struggled to find room to work against DCC.

The Cardinals (2-1) allowed him an open look at a 3-pointer early in the game, which he made, but he didn’t do much from there as Jalen Kosko and Loren Way did most of the defensive work to keep him quiet.

Scanlon scored just 12 points, five of which came in the second half with the game already out of reach. Central also force him into two charges in the game.

Central’s defensive effort wasn’t all about just Scanlon, though, as his teammates struggled to get into a flow with him not scoring. As a result, DCC forced 12 first-half turnovers that led to several easy transition baskets for the Cardinals, who also shot well from the outside and made seven 3-pointer (6 in the first half).

Damon Foster came off the bench to spark the DCC offense in the first half, as the Cardinals used all those Wolfpack turnovers to build a commanding 45-18 halftime lead. Central outscored St. Joe’s 26-10 in the second quarter.

Foster scored all 12 of his points, including a pair of treys, in the first two quarters to spearhead DCC’s dominant first half. Srock netted 10 of his game-high 14 points in the first half as well as he also hit a pair of 3-pointers.

“We have a commitment to the defensive end and an intensity to attack, and I’d say tonight we were focused on No. 1 (Scanlon),” said DCC coach Dom Varacallo. “He’s a very good player. We;ve seen him over the years and last year he had a great game against us (21 points in 55-42 Wolfpack win).

“They guys were so focused on making sure we got the ‘W’ tonight, and we knew if we took him out of his game, we would be successful. Shout out to Jalen (Kosko) and Loren (Way), who were on him all night. We sprinkled in a few other guys, but Jalen and Loren committed to taking him out of the game and making him work for everything he got.”

As for that offensive performance, Cardinals assistant coach Matt Varacallo was extremely pleased with how the team shot the ball as a whole.

“It’s something we’ve been working on at practice, and it’s nice to see it come together and translate into a win on the basketball court,” said Matt Varacallo. “We’ve had some games where we haven’t been shooting as well, so it’s certainly nice to see them (shots) fall.

“This is a special group of guys, and they love the game of basketball and that’s what matters. We’re taking every single game as a stepping stone and building to the ultimate goal at the end of the season.”

The teams traded scores to open the game and found themselves tied 6-6 past the midway point of the first quarter. That’s when DCC started to grab control as it put together a 13-2 spurt to end the quarter to take an 11-point lead (19-8).

Foster ignited that run, hitting a pair of 3-pointers and scoring eight points in the final 3:40 of the quarter. Way also scored a hoop, while Srock drained a trey in the final seconds to make it an 11-point game.

The Cardinals carried that momentum in the second quarter, getting a hoop from AJ Jenkins and a trey by Kness to make it 24-8. St. Joe’s countered with a Jonathan Clark bucket, but back-to-back 3-pointers by Armanini and Srock fueled a 10-0 spurt that put DCC up 24 points at 34-10.

Central kept the pressure on from there and eventually took a 27-point advantage (45-18) into the break. Seven different Cardinals scored in the quarter, led by Kness and Srock who had seven and five points, respectively.

The teams traded score to open the third before back-to-back hoops from Armanini put DCC on the verge of invoking the 30-point mercy rule clock at 52-23 with 5:55 left in the quarter.

The Cardinals got over that 30-point threshold shortly thereafter when Jenkins scored to make it 56-25 with 4:11 on the clock. Central Catholic eventually took a 60-30 lead into the fourth, which proved to be a low-scoring eight minutes with the clock running.

The Cardinals are back in action Monday at Moniteau.

Free - Woman's 2x and 3x clothes and coats most

NOTICE Notice is hereby given that on the 8th day

EXECUTRIX’S NOTICE Notice is given that Letters Testamentary have been