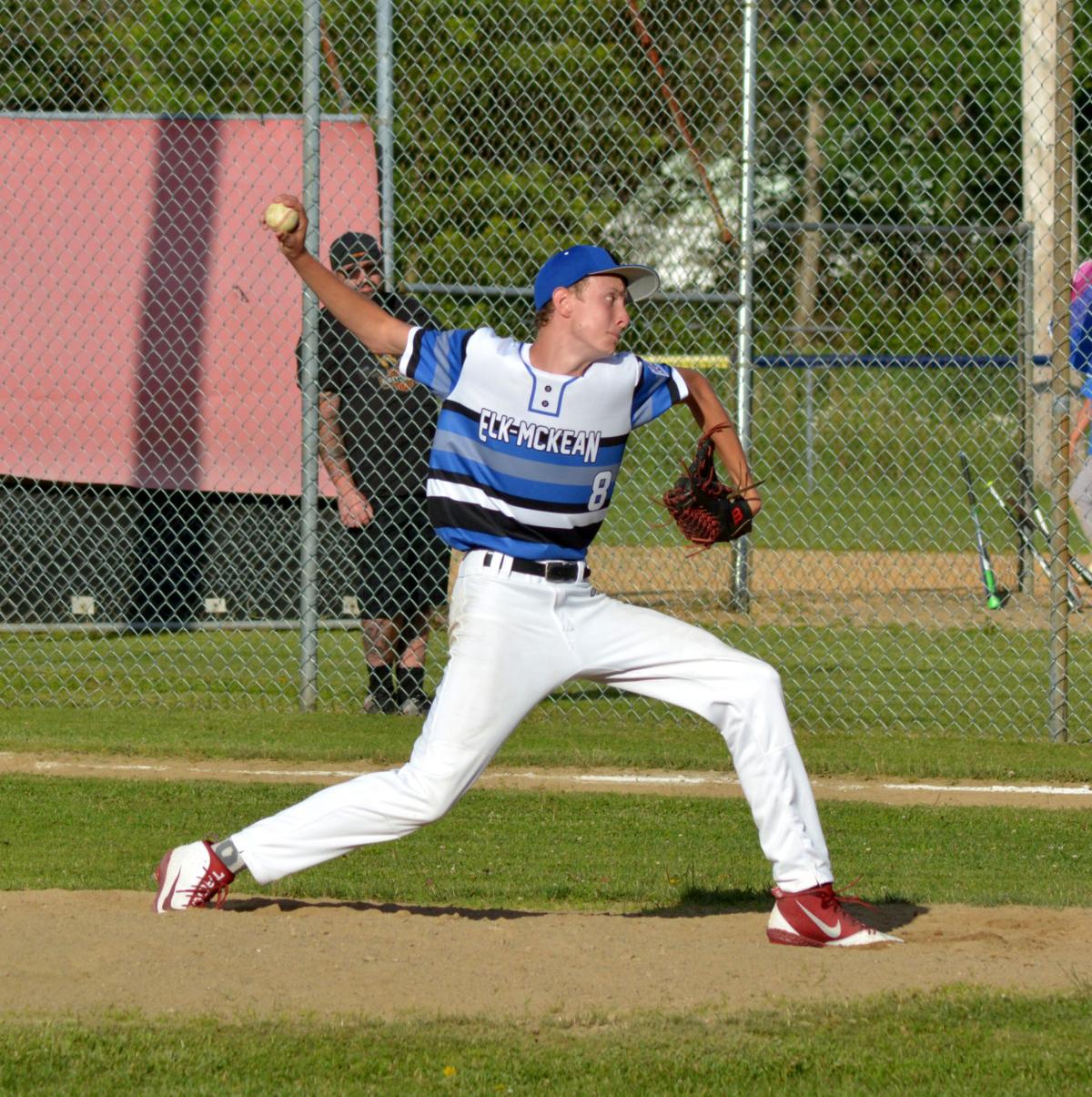 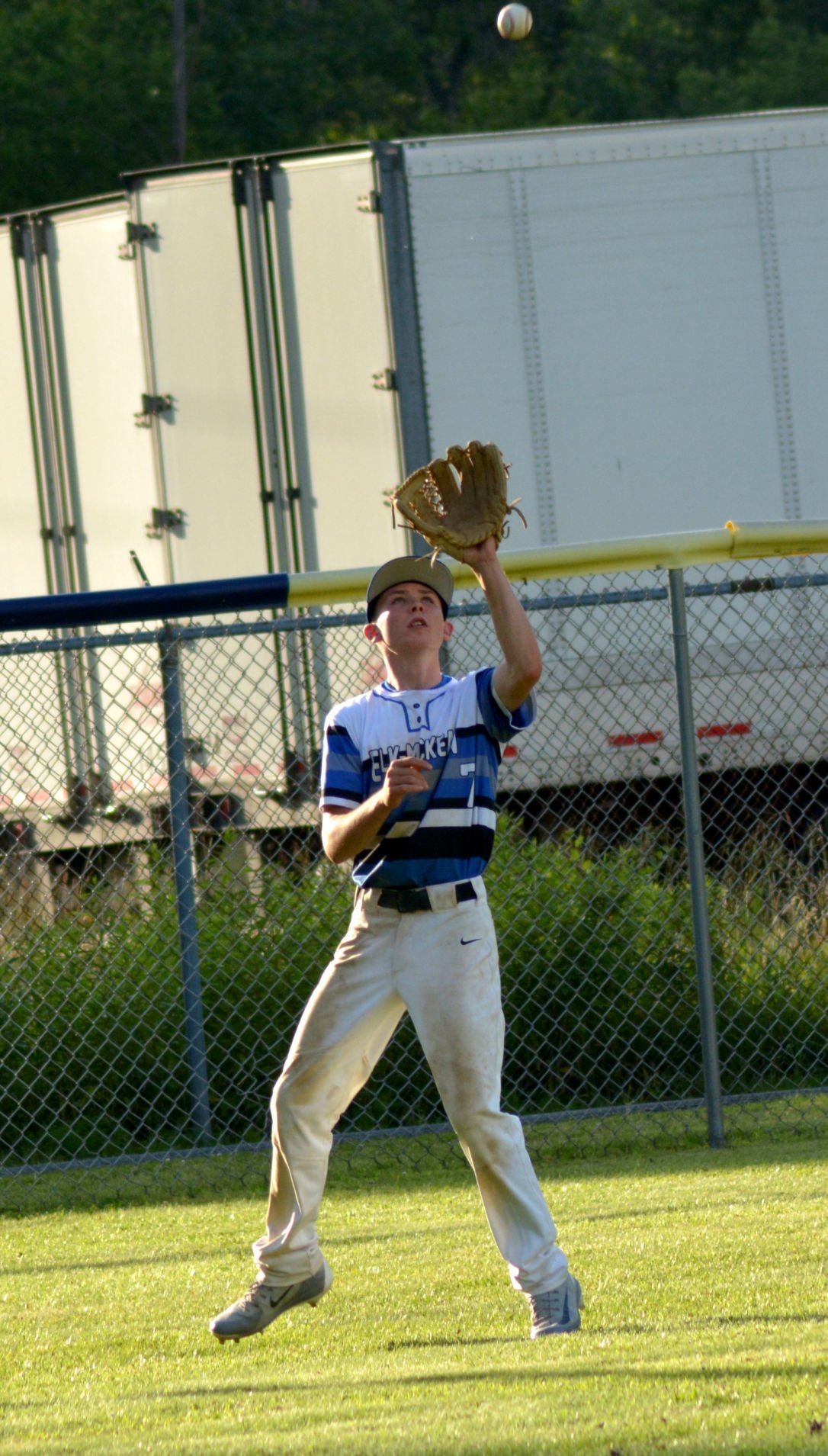 Elk-McKean Senior League All-Star Harley Morris makes a catch on a fly ball during a District 10 championship game against DuBois June 24. Morris went 3-for-3 with a double and an RBI in a 4-3 win over Upper Moreland in the State tournament Friday.

Elk-McKean Senior League All-Star Harley Morris makes a catch on a fly ball during a District 10 championship game against DuBois June 24. Morris went 3-for-3 with a double and an RBI in a 4-3 win over Upper Moreland in the State tournament Friday.

DuBOIS — It was a matter of having the right answers at the right times for Elk/McKean in its showdown with Upper Moreland as it pulled off a tight 4-3 victory in the winner’s bracket finals at the 2019 Pennsylvania Senior League tournament Friday.

Elk/McKean scored first and put together the only multi-run inning of the game to help it to the victory.

Harley Morris led the way at the plate for Elk/McKean going 3-for-3 with a double while driving in a run while Camron Marciniak scored twice.

Carson Whiteman picked up the win, allowing three runs, all earned, on six hits while walking three and striking out six in just over five innings of work. Aiden Zimmerman then finished things off to get the save.

While Elk/McKean had just one more hit that Upper Moreland in the contest, it also took advantage of a handful of walks and a pair of errors along the way, using them to take an early lead, posting single runs in both the second and third innings.

The first came after a walk to designated hitter Reese Novosel in the second as Domenic Allegretto put down a bunt and appeared to be on his way to an infield single. However, Upper Moreland pitcher Greg Wiley tried to make a tough throw to first and the ball sailed away into short right field allowing Novosel to score and Allegretto to move all the way to third.

Wiley then gave up another infield hit to Ethan Wells but Allegretto was unable to score.

Wells moved up to second without a throw, giving Elk/McKean a pair of runners in scoring position with no outs.

But Wiley was able to get out of the jam thanks to a 1-3-2 double play while getting the final out on a pop fly.

Marciniak then made it a 2-0 game in the third when he walked, stole second and later scored on another Upper Moreland error.

While Whiteman allowed just one hit through three innings, Upper Moreland got to him for a run in the fourth when Wiley laced a two-out single then later scored on an RBI hit from Jones to cut the lead to 2-1.

Elk/McKean then used a pair of walks and RBI singles from Morris and Kaden Dennis to open up a 4-1 lead in the fourth.

It turned out that Upper Moreland was far from done as it posted runs in the fifth and sixth innings to cut the margin to a single run at 4-3.

However, following a one-out double by Henderson in the sixth, Zimmerman came on in relief to retire the next five batters in order to preserve the victory.

Montoursville used a five-run fourth inning to help it to the 6-4 victory over Pennridge.

The five-run fourth turned out to be big as Pennridge scored the final four runs of the game to make things interesting.

Montoursville led 1-0 following an RBI single by Josh Burger in the third before breaking out in the fourth.

Montoursville sent 10 batters to the plate in the frame picking up four walks and three hits. At one point, six straight Montoursville players reached base safely.

However, Pennridge finally got on the board with a run in the bottom of the inning then added two more on a two-run single by Noah Rush in the fifth to cut the margin in half.

Despite scoring another in the sixth, Pennridge missed a big chance to get within one when it had a runner cut down at the plate trying to score from second on a looping single to left.

Caleb Moser led Montoursville at the plate with a pair of hits while Burger added two RBIs.

Harry Haeflein went 3-for-4 with a double to lead Pennridge while teammate Alex Fravel also had two hits.

What started out as a relatively quiet game turned into a scoring bonanza as the two teams piled up 22 runs over the final three innings leading to a 15-11 Hollidaysburg victory.

The two teams combined for 19 hits, 24 walks, four hit-batsmen and three errors in the contest.

The game was tied at 2-2 after four full innings before the floodgates opened in the fifth.

Hanover struck first, second 11 batters to the plate and scoring five times to take a 7-2 lead.

Hollidaysburg answered in kind in the bottom of the frame as it sent 13 players to the plate to push across eight runs and take a 10-7 lead.

The scoring continued in the sixth as Hanover pushed one across to get within two before Hollidaysburg batted around again in the bottom of the inning to put up another five to make the score 15-8 and seemingly take the lead for good.

Still, in a game where no lead was safe, Hanover make a final run in the top of the seventh, scoring three times and loading the bases with two to bring the potential tying run to the play.

However, that turned out to be it as Hollidaysburg recorded the final out to notch the win.

Brandon Smith had three hits and five RBIs for Hanover.