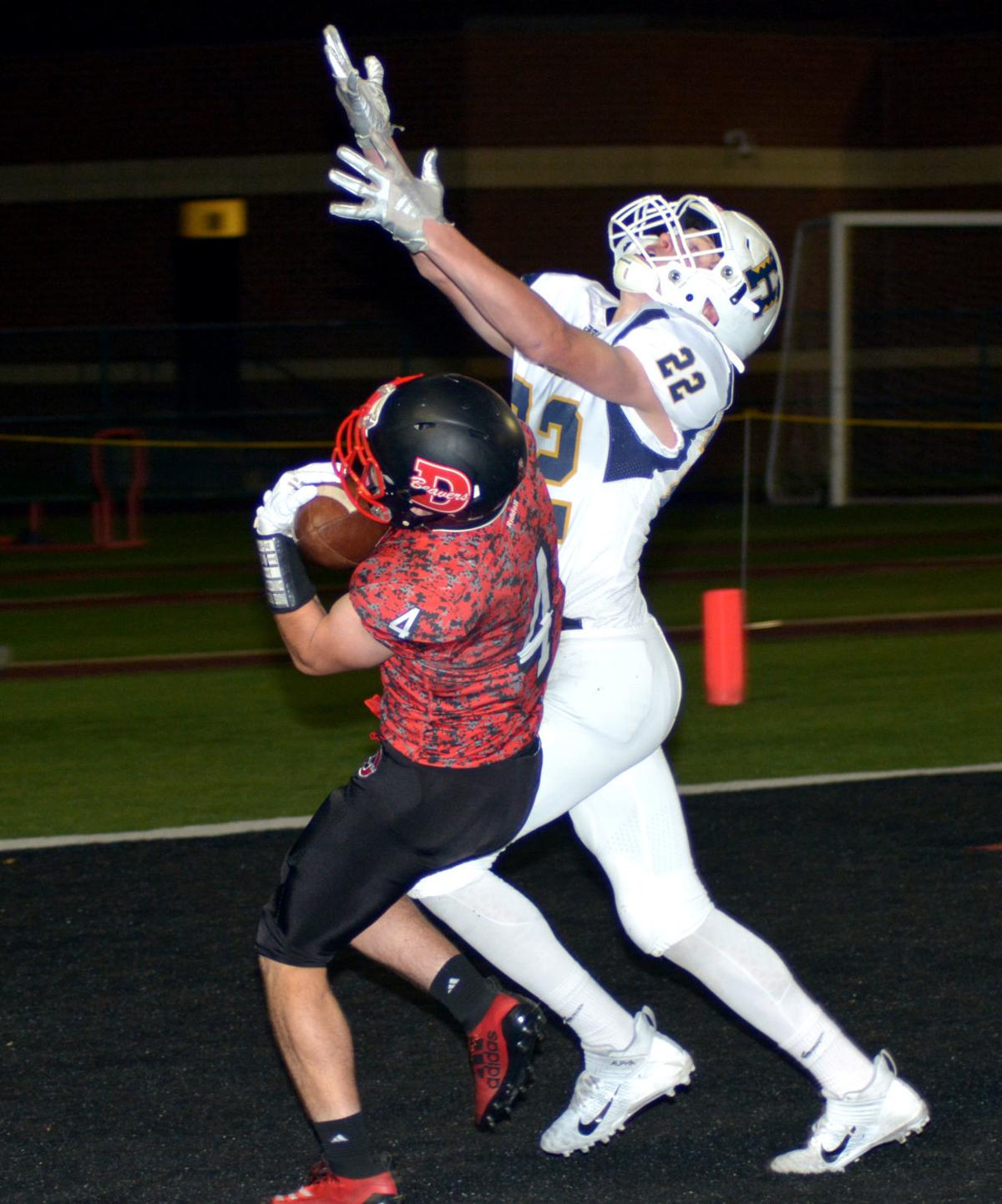 DuBois’ Nick Dilullo (4) makes an over-the-shoulder catch for a touchdown on a pass that Cam-Ron Hays dropped in over Hollidaysburg’s Rocco Grassi (22) during the first quarter Friday. Dilullo caught three passes for 42 yards and a pair of touchdowns in a 41-18 loss. 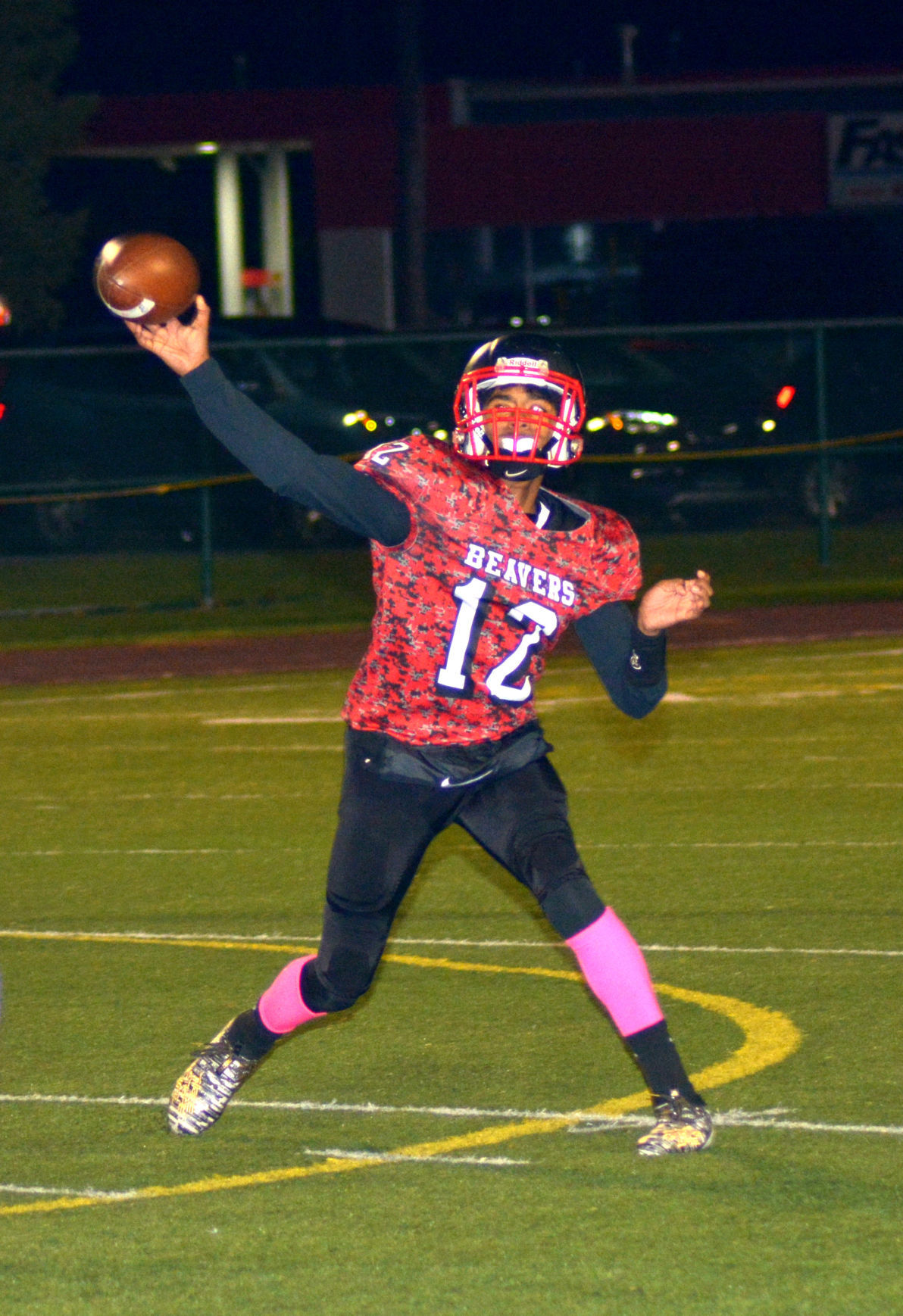 DuBois’ Cam-Ron Hays passes during the first quarter against Hollidaysburg Friday. Hays finished the game 18-of-26 for 209 yards and a pair of touchdowns along with an interception in a 41-18 loss. 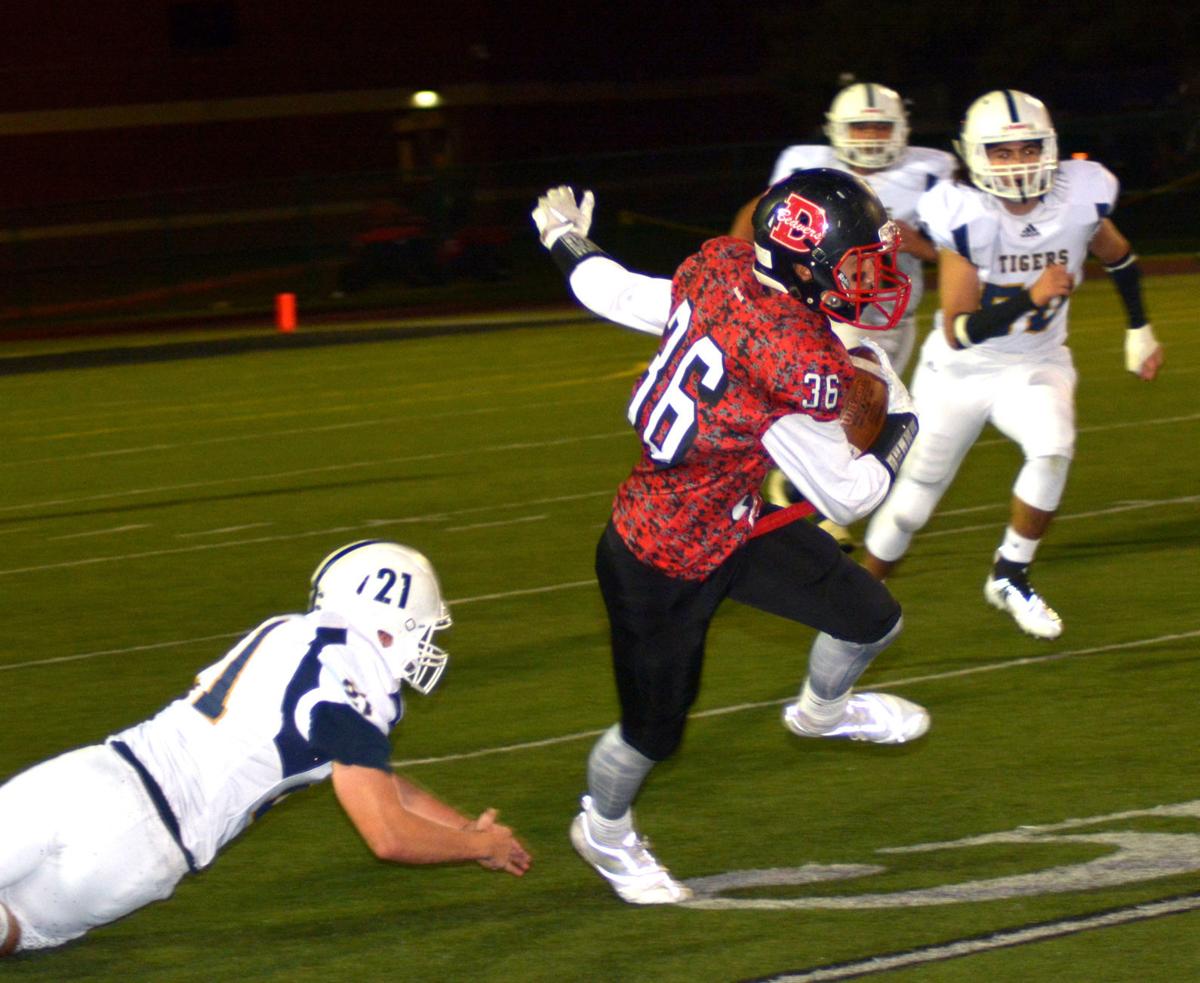 DuBois’ Chandler Ho (36) breaks away from an attempted tackle by Hollidaysburg’s Chase Fox (21) for a 38-yard gain during the fourth quarter of Friday’s game. The Golden Tigers won, 41-18.

DuBois’ Nick Dilullo (4) makes an over-the-shoulder catch for a touchdown on a pass that Cam-Ron Hays dropped in over Hollidaysburg’s Rocco Grassi (22) during the first quarter Friday. Dilullo caught three passes for 42 yards and a pair of touchdowns in a 41-18 loss.

DuBois’ Cam-Ron Hays passes during the first quarter against Hollidaysburg Friday. Hays finished the game 18-of-26 for 209 yards and a pair of touchdowns along with an interception in a 41-18 loss.

DuBois’ Chandler Ho (36) breaks away from an attempted tackle by Hollidaysburg’s Chase Fox (21) for a 38-yard gain during the fourth quarter of Friday’s game. The Golden Tigers won, 41-18.

DuBOIS — Hollidaysburg used a 27-point second quarter to break the game open on its way to a 41-16 victory that spoiled DuBois’ Senior Night festivities Friday night at Mansell Stadium.

DuBois honored its 18 seniors prior to the game and while the pregame had a celebratory feel for the Beavers, it wasn’t long before those celebrations switched to the oppositions sideline.

“I love the senior class, regardless of record, they’ve worked so hard,” DuBois head coach Justin Marshall said. “They’re such good kids and there’s nobody I’d rather be coaching.”

“Every time it doesn’t go our way, my heart breaks for them, because they’re such great kids and they do work hard.”

The Beavers won the pre-game coin toss and elected to defer to the second half, as Hollidaysburg’s offense looked to get off to a strong start.

Instead, the Golden Tigers’ special teams got things done, as Trent Paddock hauled in the opening kickoff at his own 22-yard line and broke free down the far sideline, going untouched for a 78-yard touchdown to give his team a 7-0 lead after an Ethan Pinter extra point just 11 seconds into the game.

“We had a player come off the field that should have been out there, we were playing with 10 and they returned it right back through the hole,” Marshall said. “That’s just a big mistake to start the game, Hollidaysburg is a good program, they don’t need any help so that’s definitely not how we needed to start the game.”

After DuBois turned the ball over on downs near midfield on its first offensive possession of the game, the Golden Tigers looked to add to their lead, but instead saw their first drive of the game end in one play.

The snap on that first play sailed over the head of quarterback Bryce Martellaci as a scrum for the loose ball ended with Beaver senior Amanio Deemer coming away with the recovery to set his team’s offense up at Hollidaysburg 27-yard line.

Hays dropped a pass in over a Golden Tiger defender as Nick Dilullo came down with an over-the-shoulder catch in the end zone to get the Beavers on the board.

The ensuing extra point was blocked, as Hollidaysburg clinged to a 7-6 lead with 5:58 to go in the opening quarter.

Deshawn Moss took the following kickoff back 77 yards for what appeared to be the visitors second kick return score in as many tries, but the play was called back for a holding penalty.

Penalties plagued both sides throughout the game, as Hollidaysburg committed 10 penalties for 95 yards while the Beavers were flagged 11 times for 101 yards.

Despite having the touchdown wiped off the board, the Golden Tiger offense did not waste time to find the end zone for the first time on the night, as a 29-yard run by Moss set them up deep inside DuBois territory.

Two plays later, Paddock broke through a hole along the right side to cap the four-play, 61-yard drive with a 25-yard rushing score as the senior added his second score of the first quarter.

Trailing 14-6 late in the first quarter, the Beavers’ offense looked to respond, but instead Hays had a pass deflected at the line by Paddock as Jameal Boykin Jr. came down with the batted ball for an interception at midfield.

Later on that drive, Hollidaysburg faced a 2nd-and-1 from the DuBois 4-yard line to start the second quarter, as Hunter Barr plunged up the middle for a 4-yard score on the opening play of the quarter.

After a missed extra point the visitors found themselves with a 20-6 lead just four seconds into the second quarter.

DuBois’ next drive went nowhere, as a pair of runs were snubbed at the line of scrimmage around an incomplete pass from Hays as Lance Henninger lined up to punt for the first time on the night.

Paddock continued his exceptional night on special teams, breaking through the line to get a hand on the punt, which skipped towards the Beavers’ end zone.

The Golden Tiger senior tracked down the block and scooped it up inside the 10-yard line for a walk-in touchdown just 1:50 after the Barr touchdown run as Hollidaysburg had suddenly broken the game open at 27-6 with 10:16 remaining in the first half.

DuBois’ following drive ended near midfield with its first of three lost fumbles on the night, as an unsportsmanlike conduct penalty after the play on the home side gave Hollidaysburg the ball on the plus side of the 50 at the 31.

A pair of short runs by the Golden Tigers were both aided by late hit penalties on the Beavers, as on the third play of the drive Barr powered through up the middle for a 3-yard touchdown as another unsuccessful extra point left the score at 33-6 with 7:45 left in the second quarter.

The two sides then traded fumbles back-and-forth over the next three possessions. First it was DuBois, who faced a 4th-and-4 at its own 40-yard line as DuBois lined up in punt formation.

The Beavers then appeared to pull off the fake perfectly, as the snap went to the upback Derraick Burkett, who took the carry around the right side of the line and down the near sideline for 24 yards.

However, the ball was jarred free as Burkett was brought down, as Dominic Franco recovered the fumble for Hollidaysburg, but two plays later his team’s offense put the ball on the turf and DuBois’ Tyrese Williams fell on the loose ball.

The Beavers were not able to capitalize however, as they too fumbled the ball away on just the second play of their drive.

The Golden Tigers put an end to the string of turnovers with an 8-play scoring drive finished off by Barr’s third rushing score of the quarter, this time from two yards out.

Jake Meginnis then connected with Martellacci on a two-point conversion pass to make it 41-6 with 1:11 left in the half, as the visiting side took that lead into the locker room.

DuBois had the lone scores in each quarter after the break, but it was not nearly enough to stage the 35-point comeback.

In the third quarter, the Beavers needed just two plays to go 62 yards to the end zone, as Hays connected with Chase Husted for a 21-yard gain on the first play and 15 yards were tacked on for a targeting penalty on the play.

Hays then found Dilullo along the near side on a wide receiver screen, as Husted laid a key block allowing Dilullo to go 26 yards down the near sideline for a touchdown at the 4:19 mark of the third quarter.

In the fourth quarter it was another quick scoring drive, as this time the Beavers went 54 yards in just four plays, the big strike being a 38-yard pitch and catch from Hays to Chandler Ho, as Ho broke several tackles on his way into the red zone.

Hays finished the game 18-of-26 passing for 209 yards and a pair of touchdowns along with an interception, as DuBois outgunned the Golden Tigers in the loss by a total of 293-235.

“Cam (Hays) coming in, starting as a freshman that probably has never happened in school history for a quarterback,” Marshall said. “It just puts him a little further ahead for next year, he’s been working hard.”

Ruben Estrada capped the drive with a 9-yard rushing score with 3:58 left to play to bring the final score to 41-18.

DuBois went for two after both second-half scores, but saw a pair of passes fall incomplete.

“We’ve got another game to go, we’re gonna try to send them (seniors) out on top,” Marshall said.

DuBois wraps up the season next Friday night on the road against Brookville (7-2).