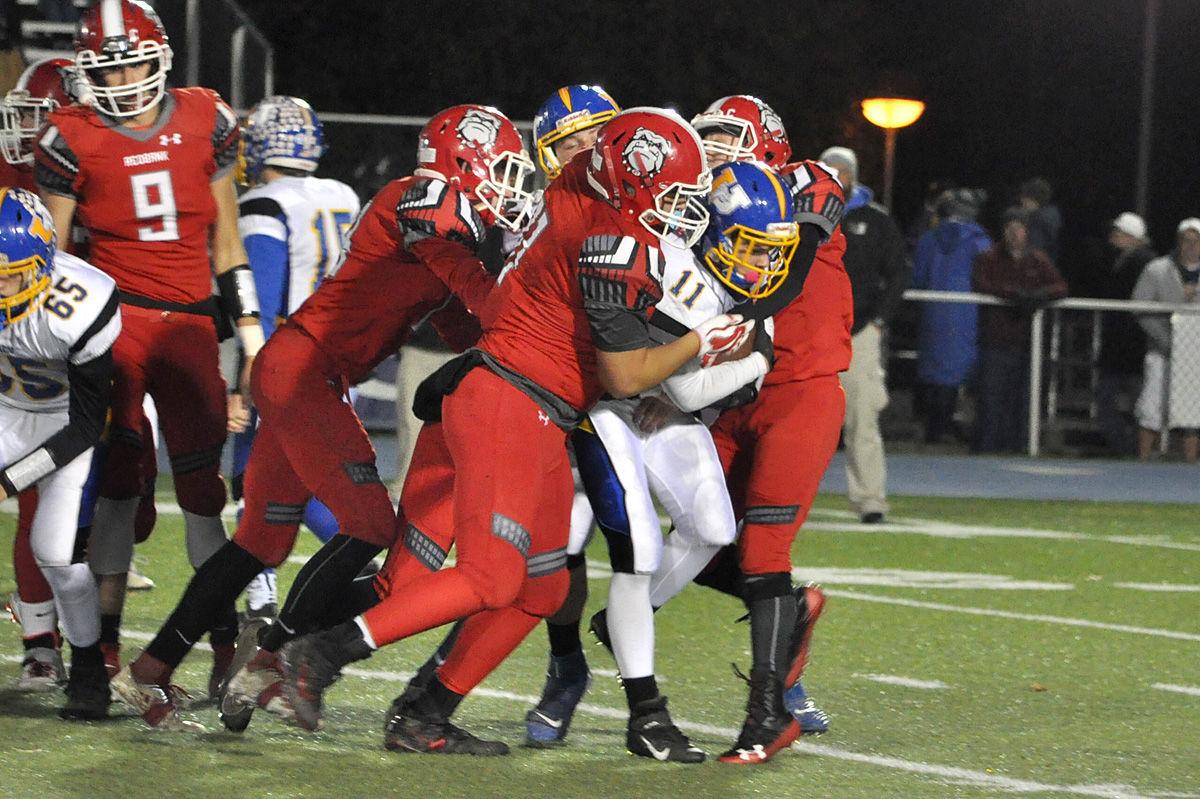 Redbank Valley’s Kobe Bonanno and a couple teammates help stuff Union/A-C Valley’s Eli Penny (11) for a short gain in Friday’s game. The Bulldogs limited the Falcon Knights to 175 yards of offense and just 43 yards and three first downs in the second half. 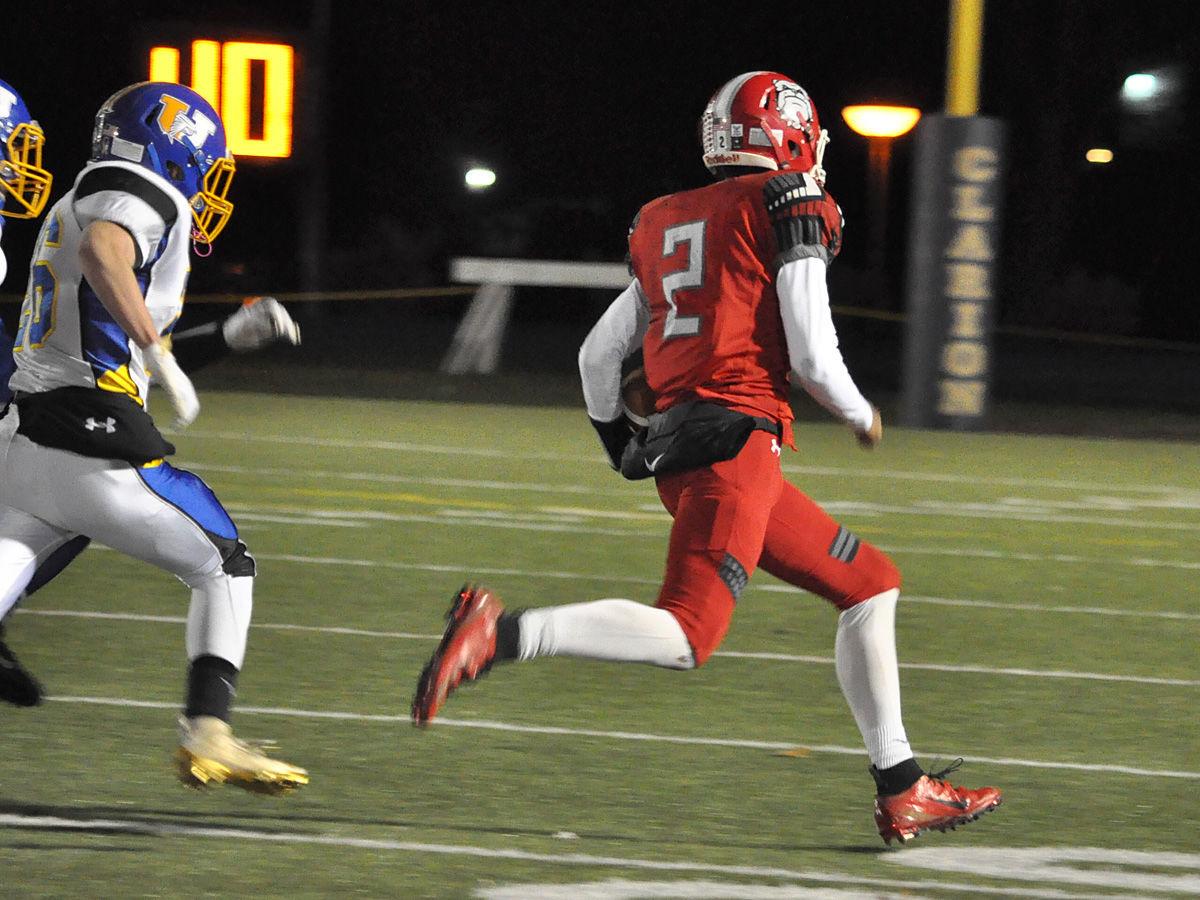 Redbank Valley's Joe Mansfield (2) returns an interception for a touchdown during Friday night's game at Clarion University's Memorial Stadium. He scored twice in the Bulldogs' 32-6 win. 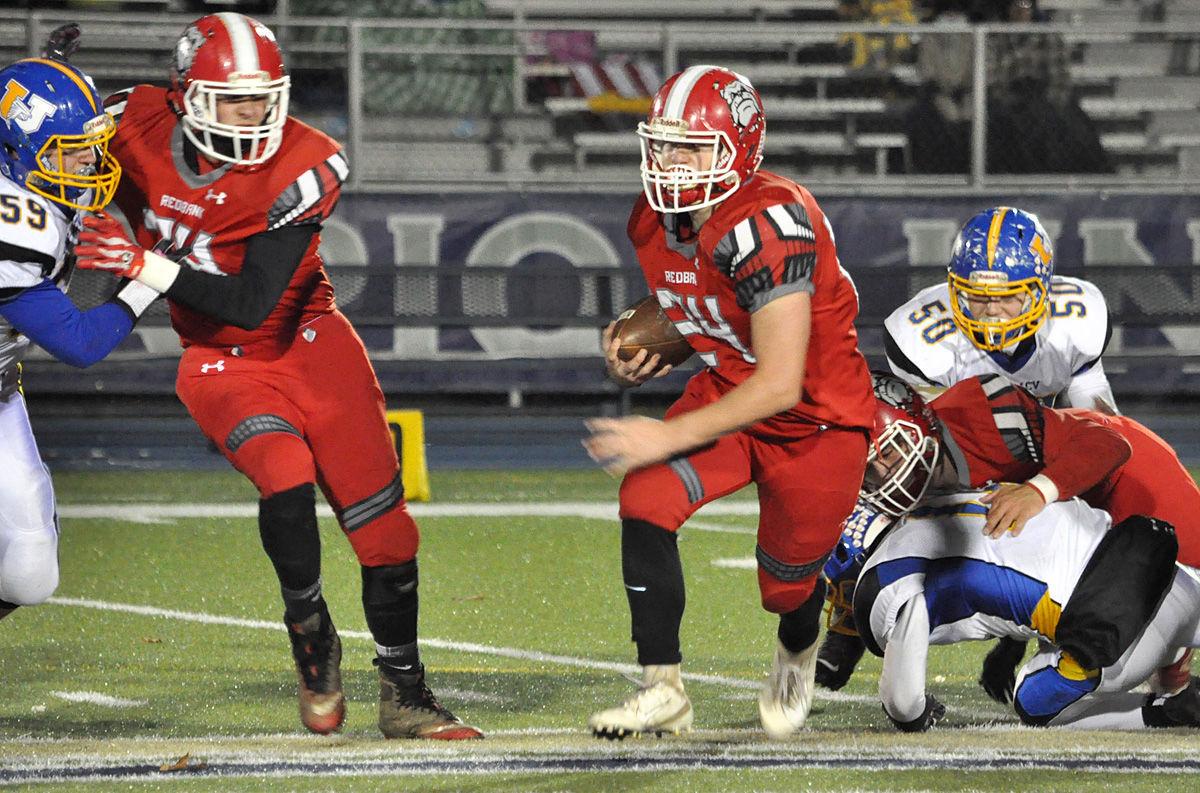 Redbank Valley’s Ray Shreckengost breaks loose for a short gain during Friday night’s game. He ran for 113 yards on 21 carries and a touchdown in the Bulldogs’ win over Union/A-C Valley.

Redbank Valley’s Kobe Bonanno and a couple teammates help stuff Union/A-C Valley’s Eli Penny (11) for a short gain in Friday’s game. The Bulldogs limited the Falcon Knights to 175 yards of offense and just 43 yards and three first downs in the second half.

Redbank Valley's Joe Mansfield (2) returns an interception for a touchdown during Friday night's game at Clarion University's Memorial Stadium. He scored twice in the Bulldogs' 32-6 win.

Redbank Valley’s Ray Shreckengost breaks loose for a short gain during Friday night’s game. He ran for 113 yards on 21 carries and a touchdown in the Bulldogs’ win over Union/A-C Valley.

CLARION — Rematches have not gone well for the regular-season winner in the District 9 Class A playoffs lately.

So revenge is sweet indeed for the Redbank Valley Bulldogs, who ride that trend right into this Saturday’s D9 Championship game against Coudersport at DuBois’ E.J. Mansell Stadium starting at 1 p.m.

The Bulldogs returned two interceptions for touchdowns in the first half, built a quick 19-0 lead and rode that momentum to a 32-6 win over Union/A-C Valley Friday night at Clarion University’s Memorial Stadium.

Since D9 reformed its divisional setup in football last year, things haven’t been all that easy for the team that has to beat a foe for a second time in the playoffs. That’s especially the case in Class A where teams that won in the regular season are now 3-6.

Coudersport anchored that trend last year with three “revenge” wins on its way to the district title. Now it’s the Bulldogs who are tasked with turning around another lopsided loss if they want to win their first D9 title since 1996. It was 56-0 in Coudersport back on Oct. 12, which was followed by a 28-6 loss at home on Senior Night to the Falcon Knights.

“It’s a tremendous opportunity for us,” said Bulldogs head coach Blane Gold, whose team improved to 9-2. “To be the best, you have to beat the best. For us, losing (starting quarterback) Gunner (Mangiantini) to the injury in the third quarter, at that point we weren’t going to come back from a deficit there with a freshman quarterback, but for us, we felt we didn’t do some things well that we do well and things snowballed pretty quickly.

“(Coudersport) is a tremendous football team, a state-ranked team, but we’re excited for it and meet them in DuBois Saturday.”

Coudersport beat Smethport for the second time also Friday night in Bradford with a 35-6 win. The Falcons lost to the Bulldogs in last year’s regular-season matchup, 41-27, but two weeks later in the playoff opener, they blasted the Bulldogs on the same field in New Bethlehem, 52-7.

Two wins later against Clarion-Limestone and then Smethport, the Falcons won the district title.

Setting the tone early against the Falcon Knights, the Bulldogs needed just five plays to score on the opening possession of on Ray Shreckengost’s 20-yard run less than two minutes into the game. After trading punts, the Bulldogs got their first pick-six from Sam Hetrick who intercepted Luke Bowser and returned it 45 yards for a touchdown.

Then on the fifth play of the second quarter, Joe Mansfield tipped a Bowser screen pass up into the air and grabbed it for another interception return, this time on a 41-yard dash to make it 19-0 with still 10:46 left in the second quarter.

“Ethan (Hetrick) and Joe, what they do on the (defensive) edge is huge,” Gold said. “We had outgained Union in the first game, but a couple of big plays they hit us on were some quick screens, things we weren’t prepared for. So we drew some things up this week to put Joe in that position and however the ballots came out for all-conference, I believe the best corner in the conference wears 21 (Sam Hetrick) for us and he made that play at the beginning for the pick-six to get us going.

“Both of those guys, Sam, not just the speed but jumping ability and Joe, we laugh because he can be scatter-brained at times, but his athletic ability is just incredible and it was on display there.”

Union’s lone score answered Mansfield’s return on the next possession when Bowser hit Colton Hoffman on a 24-yard touchdown pass at the 6:42 mark of the second quarter.

The Bulldogs scored twice in the second half, Kobe Bonanno scoring on fourth-and-goal from the 2 with 4:37 left in the third quarter. That touchdown came seven plays after Mansfield blocked a punt and the Bulldogs recovered at the Union/ACV 14.

Mansfield’s 7-yard TD pass from quarterback Cam Wagner to cap the game’s scoring with 2:52 left in the game.

The Falcon Knights (7-4) fumbled away the ball on three straight offensive plays in the second half, the last one setting up the Bulldogs at the Union/ACV 7 three plays before Mansfield’s second touchdown.

“Turnovers tonight put us in a huge hole,” Union/ACV head coach Brad Dittman said. “We didn’t tackle real well at the beginning of the game and we fought back through that and I think we held our own, but too many mistakes. Offensively, jumping off sides, we haven’t done that in two weeks of practice and we do it four times tonight. Six turnovers, what can you say? You can’t do that against good teams in the playoffs.”

The Bulldogs outgained the Falcon Knights, 207-176, holding them to just 43 yards and three first downs in the second half. Shreckengost ran for 113 yards on 21 carries.