Wind Advisory from 3AM EST THU until 1AM EST FRI 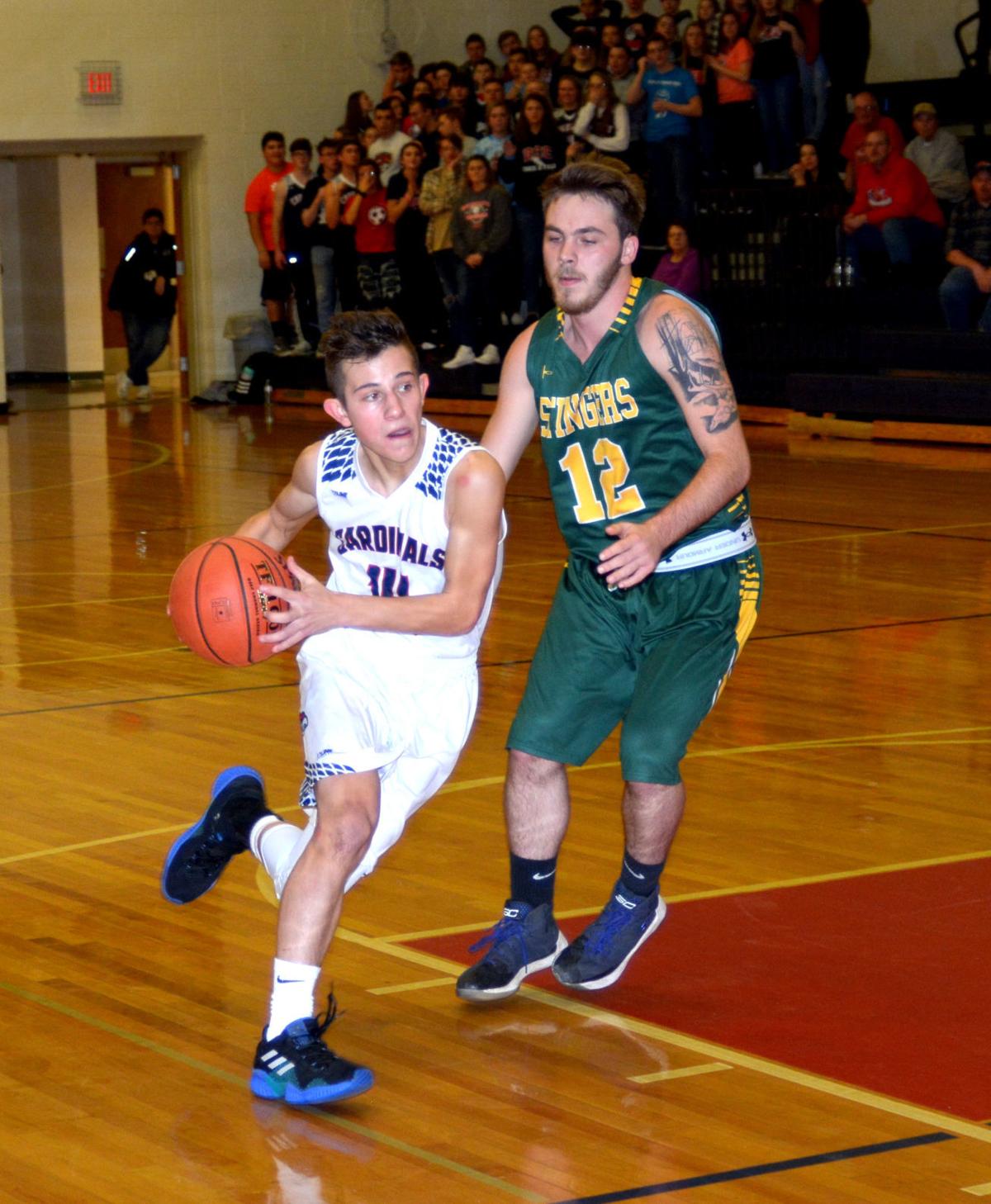 DuBois Central Catholic’s Alex Jenkins (14) drives to the basket for a score around Marion Center’s Mike Castella (12) during the fourth quarter Friday. Jenkins finished with eight points in a 71-60 loss for the Cardinals. 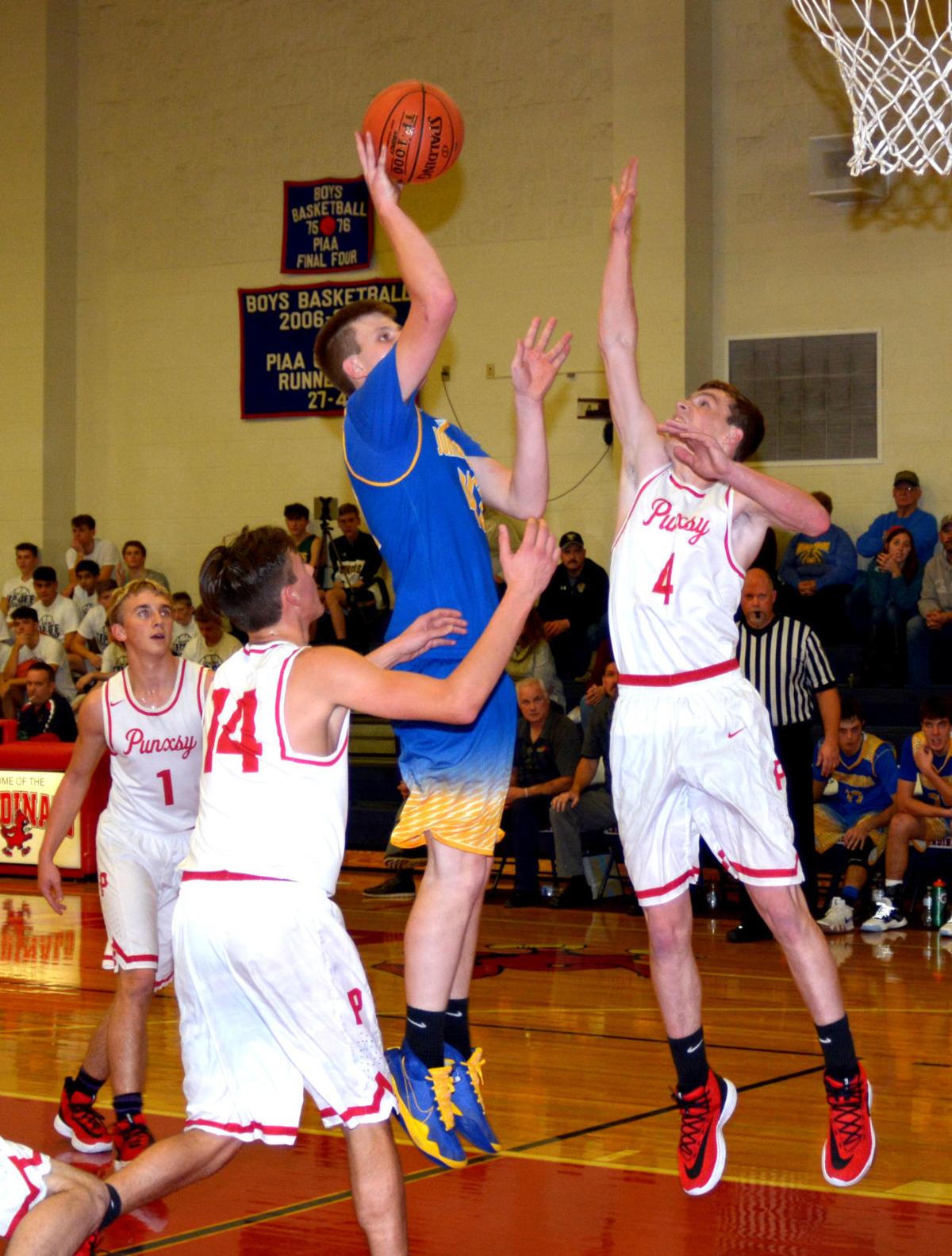 Johnsonburg’s Cameron Stelene (42) scores on the inside between Punxsutawney’s Darren Byers (4) and Ethan Presloid (14) during the third quarter Friday. Stelene led the Rams with 17 points and 17 rebounds in a 62-45 victory.

DuBois Central Catholic’s Alex Jenkins (14) drives to the basket for a score around Marion Center’s Mike Castella (12) during the fourth quarter Friday. Jenkins finished with eight points in a 71-60 loss for the Cardinals.

Johnsonburg’s Cameron Stelene (42) scores on the inside between Punxsutawney’s Darren Byers (4) and Ethan Presloid (14) during the third quarter Friday. Stelene led the Rams with 17 points and 17 rebounds in a 62-45 victory.

For the Rams, their season opened with a 62-45 victory over Punxsutawney in the first game of the night, while the Cardinals were topped 71-60 by Marion Center in the nightcap.

Here is a closer look at each game:

After the Chucks got the scoring started, Johnsonburg responded with a 10-1 run and never looked back on its way to the 17-point season-opening victory.

Micah Kriebel drained a three-pointer just 11 seconds into the game for Punxsy as both teams got off to a bit of a sluggish start.

The Rams finally got on the board nearly three minutes into the game on a bucket by Austin Green, while Gabe Watts followed with a score of his own to give Johnsonburg a lead it would hold the rest of the night.

Eric Christoff added a three-pointer during the run while Cameron Stelene, who was a force on the inside all night for the Rams, capped the run with a basket as they took a 16-9 lead into the second quarter.

Instead, Punxsutawney closed the half on a 12-3 run to cut the deficit down to five at 30-25 heading into the half.

The third quarter was when Stelene began to take over, as the junior scored six points and grabbed six boards, finishing with 15 points and 12 rebounds in the second half alone in his 17 point, 17 rebound double-double.

“He (Stelene) commanded things in there and was key,” Johnsonburg head coach Bill Shuey said. “Missed a few easy ones (baskets), but we’ll work on that and he’ll hopefully be a forced to be reckoned with by the end of the year.”

The Rams used another big run, this time going on a 14-3 stint to stretch their lead to 46-37 heading into the final quarter.

Gino Gregori opened the fourth with five straight points for Johnsonburg to help it stretch its lead back out to double digits.

The Rams eventually finished off Punxsy with a 62-45 victory to open their season with a win as along with Stelene’s double-double, Green added 16 points and seven rebounds while Watts finished with 10 points and eight boards.

“Punxsy was very aggressive, they were all over us and sped us up a couple times and we turned the ball over, so hopefully the kids learned the lesson that we have to stay within the framework of what we want to do,” Shuey said.

For most of the night DuBois Central Catholic and Marion Center went toe to toe in their respective season openers in the nightcap of Friday’s opening day of the DCC Tip-Off Tourney.

The difference proved to be a 12-2 run the Stingers were able to go on late in the first half as they never relinquished the lead on their way to victory.

The first quarter was action-packed as the teams traded big shot after big shot with Marion Center being able to hold a slim lead for most of the frame.

DuBois Central was able to hold the lead briefly on two separate occasions early in the first, both following three-pointers from Parker Meholick.

Marion Center’s biggest lead came at 16-11 after it went on a 6-0 run, but a pair of late treys from Damon Foster and Ethan Kness gave DCC (0-1) a one-point lead in the final minute before a Marion Center bucket gave it a 20-19 lead after the opening frame.

The high-pace action continued in the second quarter as both teams stayed hot on their respective offensive ends, the difference being the Stingers were able to put 26 on the board while DCC added another 19 spot to go into the half trailing 46-38.

The Cardinals took their biggest lead of the night at the 5:09 mark of the second when Loren Way grabbed an offensive rebound and scored on the inside while drawing a foul, as he was unable to finish off the three-point play, but the score remained 30-24.

Then after taking a 31-27 lead with 4:07 to go in the half, momentum quickly swung in favor of Marion Center.

“That run in the second quarter definitely did hurt us, I thought we lost focus defensively and gave them too many easy buckets, but give them (Marion Center) credit, they also hit some tough shots,” DCC head coach Dom Varacallo said.

DuBois Central Catholic looked to take momentum into the half as it got a three-pointer from Alex Jenkins, who then went 1-of-2 at the foul line with 7.6 seconds left in the half to cut the deficit to 43-38.

After a mad scramble for the ball on the other end, the Stingers add an inbounds play with just over a second remaining, as Justin Peterson got open in the corner and drained a three-pointer to stretch the lead back out to eight heading into the half.

Still holding an eight-point lead (57-49) late in the third quarter, Marion Center scored the final five points in the closing minute to take a 13-point edge into the final frame.

Marion Center then held the hosts scoreless down the stretch, as it added three free throws to bring the final score to 71-60.

FREE SOFA Light brown. Fair condition. Reclines on one side.