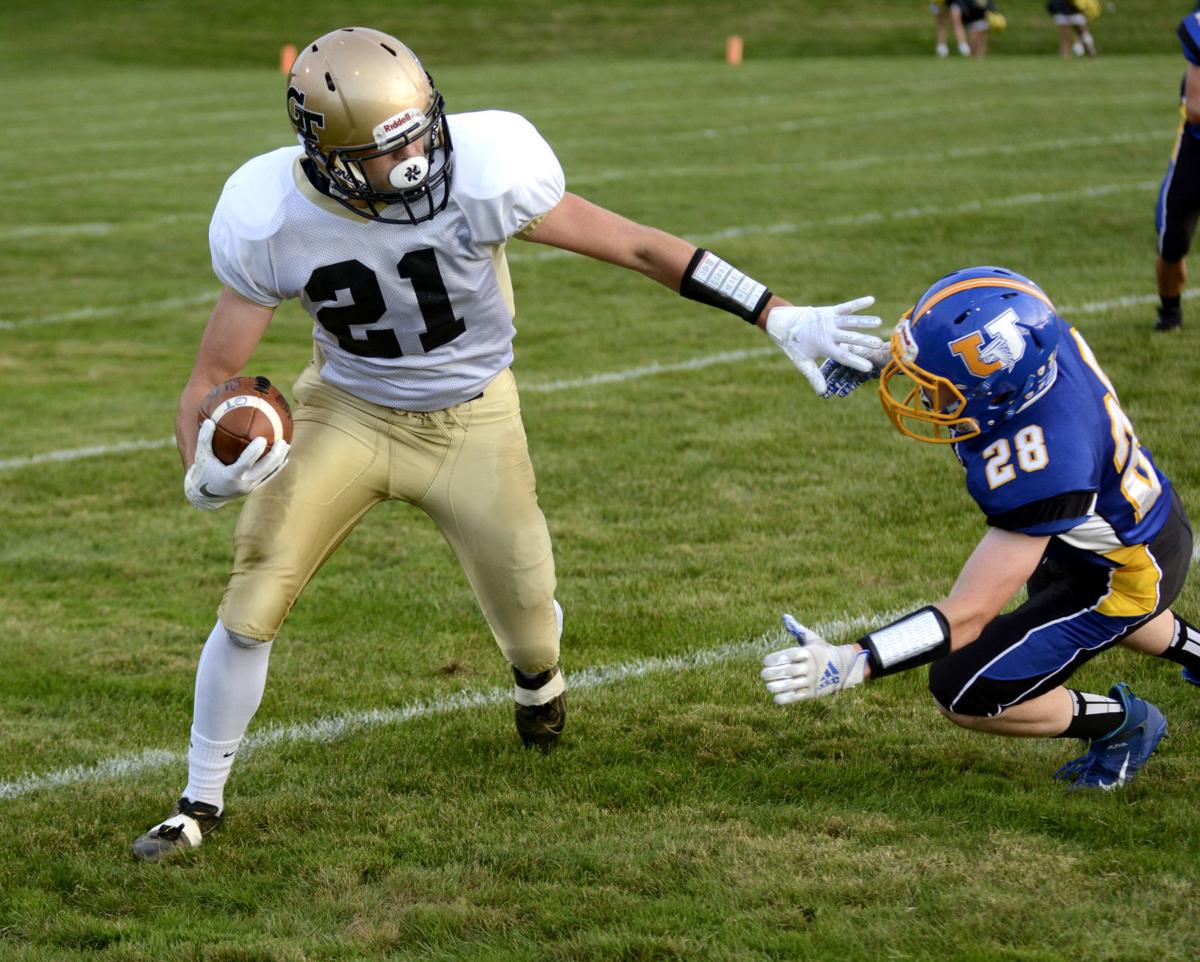 Curwensville’s Jake McCracken (21) stiff-arms Union A-C Valley’s Tony Thompson (28) after making a first quarter catch Friday night. McCracken hauled in six passes for 66 yards to account for a majority of of the Golden Tide’s total offense in a 24-0 loss. 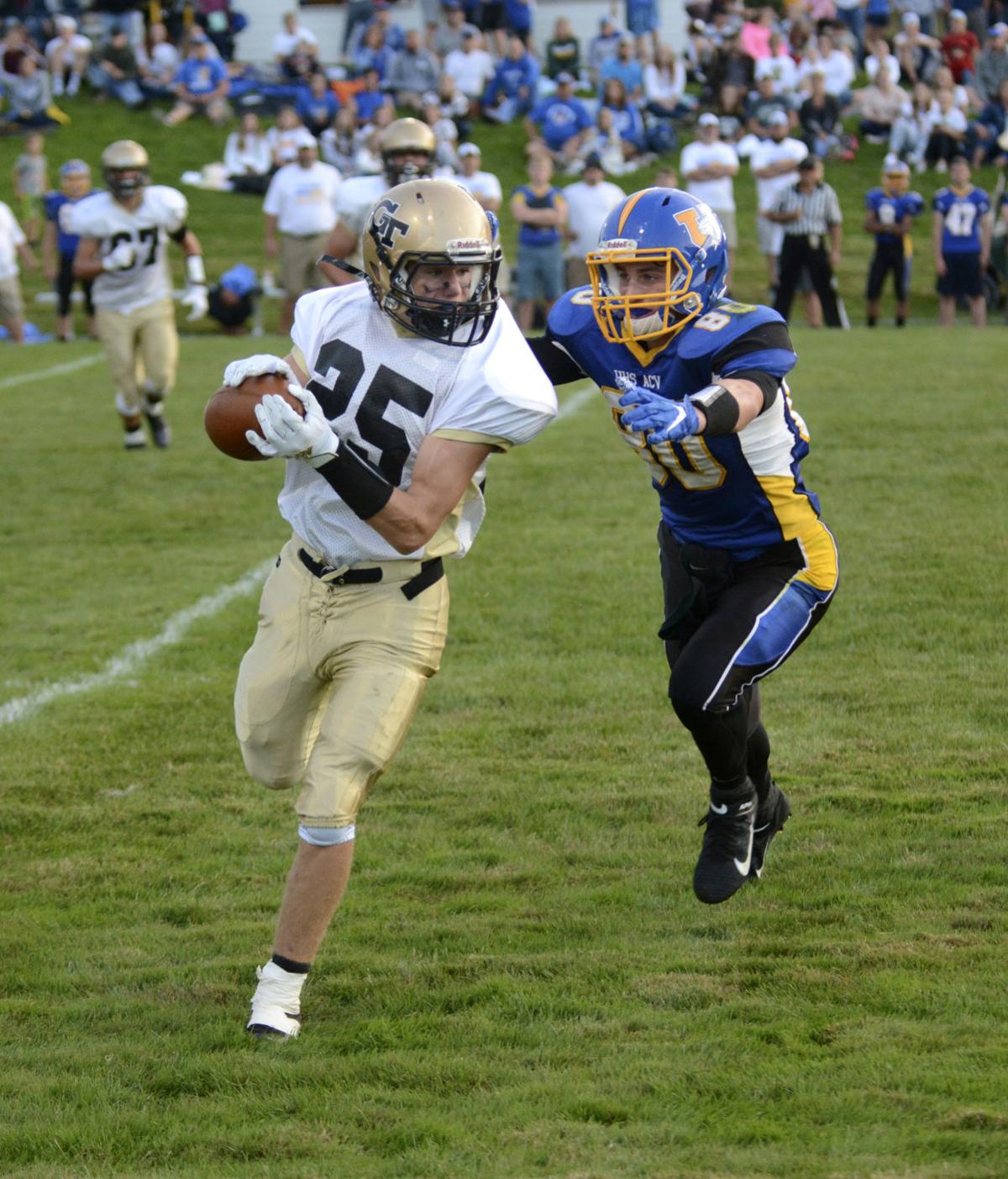 Curwensville’s Collin Jacobson (25) looks to turn up field as he makes a catch during first quarter action Friday. The play only went for two yards as Union/A-C Valley’s Colton Hoffman (80) made a quick tackle on the play. Jacobson had two grabs for four yards on the night.

Curwensville’s Jake McCracken (21) stiff-arms Union A-C Valley’s Tony Thompson (28) after making a first quarter catch Friday night. McCracken hauled in six passes for 66 yards to account for a majority of of the Golden Tide’s total offense in a 24-0 loss.

Curwensville’s Collin Jacobson (25) looks to turn up field as he makes a catch during first quarter action Friday. The play only went for two yards as Union/A-C Valley’s Colton Hoffman (80) made a quick tackle on the play. Jacobson had two grabs for four yards on the night.

FOXBURG — For the third time in as many weeks, the Curwensville football team found itself involved in a game featuring a shutout, and unfortunately for the Golden Tide, they came out on the wrong end of that scenario for the second time in three games.

This time around it was Union/A-C Valley holding the Golden Tide scoreless, as the Falcon Knights came away with a 24-0 victory at A-C Valley High School for their second straight win after dropping their opener at Coudersport (30-8).

Union/A-C Valley entered the contest fresh off a 20-12 win at Sheffield last Saturday, while Curwensville blanked Cameron County, 20-0, in the first game played at the newly named Coach Andy Evanko Stadium. That victory by the Tide came on the heels of a 21-0 loss at Elk County Catholic in their opener.

Friday’s matchup was all Falcon Knights as they dominated the game in the trenches. Union/A-C Valley held Curwensville to just 84 yards of total offense, including minus-2 yards on just 15 plays in the second half.

The Union/A-C Valley defense also forced two turnovers on a pair first-half interceptions, the second of which led to the game’s first score — a 6-yard touchdown run by Tony Thompson with 6:15 left in the opening half.

Thompson’s score proved to be all the points the Falcon Knights needed, but they struck again before the half to take a 12-0 lead into the break.

Union/A-C Valley then scored once in each quarter in the second half as it outgained Curwensville 110-(-2) over the final two quarters. The Falcon Knights finished with a 244-84 advantage in total yards in the game, with Curwensville having minus-1 yard rushing on 29 carries.

“We weren’t prepared tonight, and I’ll take all the blame for that,” said Curwensville coach Jim Thompson. “I just told the kids, whatever we did this week (at practice), it wasn’t the right thing and we were just not ready to play.

“It was 24-0, and we were not good enough to win tonight. It starts at the top and trickles down, and we as coaches just have to go back and re-evaluate things.

“We’re giving them (Saturday) off even though we usually lift and watch film. We’ll start fresh on Monday and just forget about this.”

Curwensville’s best scoring chance came on its first possession after its defense forced a quick three-and-out to start the game.

The Golden Tide promptly put together a 16-play, 44-yard drive that ate up a large chunk of the first quarter.

Junior Jake McCracken had three huge catches on the drive to keep it alive. The first was for 11 yards on third-and-9 at the Tide 32. He then added a 13-yard catch before hauling in a 19-yard pass from Daniel McGarry on fourth-and-8 at the Union/ACV 43. McCracken had six catches for 66 yards overall.

That third catch gave Curwensville the ball at the Falcon Knight 23, but a holding penalty hurt the Tide and eventually put them in fourth-and-21 at the 35.

McGarry’s fourth down pass was intercepted by Caden Rainey, as the Tide offense came up empty on the long drive. McGarry finished 11 of 16 for 85 yards and the two picks. He threw just two passes after halftime.

Union/ACV then put together an 11-play drive of its own, marching from its own 23 to the Tide 35 before Curwensville’s Thad Butler picked off a pass by Luke Bowser at his own 21.

Disaster struck the Tide three plays later though, as Falcon Knight Colton Hoffman stepped in front of third-down pass by McGarry and returned it to the Curwensville 19.

An 11-yard catch by Rainey on third down extended the drive, which was capped three plays later by Thompson’s 6-yard TD run.

The Union/ACV defense forced a quick punt to get the ball back, then needed just three plays to find paydirt as Bowser hit Rainey on a 47-yard touchdown pass with 2:48 left in the half. A failed two-point conversion — one of four in the game for the Falcon Knights— made it 12-0.

The third quarter turned into a defensive battle both ways as neither team recorded a first down through the first five possessions.

The Tide’s Jake Mullins did his part on special teams, averaging 38.4 yards on seven punts.

However, Union/ACV used a huge 44-yard punt return by Rainey to set up first-and-goal at the Tide 10 midway through the third. Three plays netted just five yards, but on fourth down, Bowser found Tanner Merwin open in the end zone for a 5-yard TD pass to make it 18-0.

The Falcon Knight defense forced yet another three-and-out after the score, then marched 85 yards on 11 plays to find the end zone for the final time in the game.

Merwin had a key 34-yard catch on a go-route to jump-start the drive and quickly put Union/ACV at midfield. Union then ripped off runs of 10, 7, 9 and 7 yards to reach the red zone.

Curwensville’s defense tried to stiffen though, and forced the Falcon Knights into third-and-17 at the 19. However, an 18-yard grab on a slant by Rainey gave Union/ACV first-and-goal at the 1. Rainey had five catches for 91 yards.

Bowser powered in from there with 9:47 left in the fourth to set the eventual final. Bowser was 9 of 21 passing for 138 yards, two TDs and the one interception.