Frost Advisory from 1AM EDT MON until 9AM EDT MON 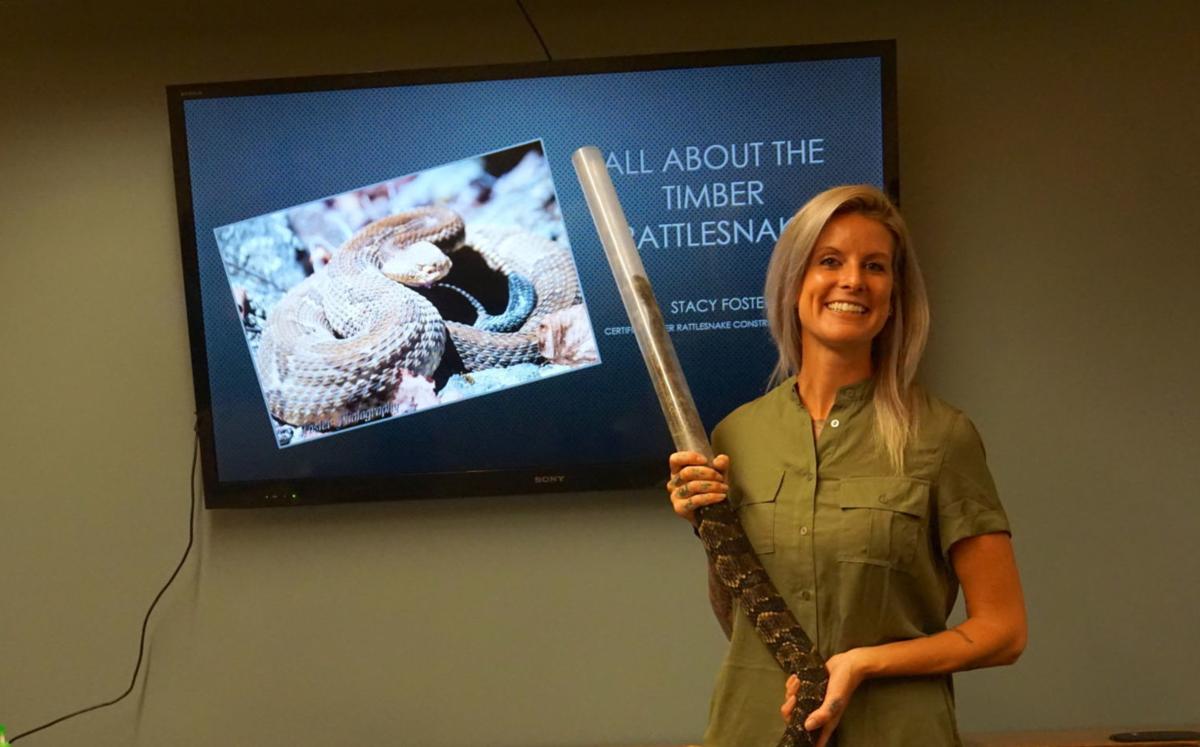 Certified Rattlesnake Construction Monitor Stacy Foster, an Elk County native, holds a timber rattlesnake during one of her presentations at Sinnemahoning State Park. Children gather around Byrnedale woman Stacy Foster as she gives a presentation on timber rattlesnakes at Sinnemahoning State Park.

Certified Rattlesnake Construction Monitor Stacy Foster, an Elk County native, holds a timber rattlesnake during one of her presentations at Sinnemahoning State Park.

Children gather around Byrnedale woman Stacy Foster as she gives a presentation on timber rattlesnakes at Sinnemahoning State Park.

BYRNEDALE — St. Marys native Stacy Foster has a passion for something that many people may find shocking — snakes.

Foster, a Byrnedale resident, can remember growing up on a farm in St. Marys. Everyone was afraid of snakes, she recalls, but she wasn’t.

It all started when a friend invited her to look for rattlesnakes in 2008-2009 in Medix. She enjoyed the thrill and the adrenaline, and it became her hobby to search for and photograph snakes.

Foster attended Penn State DuBois, studying wildlife technology, and worked as a wildlife specialist, herpetologist — someone who studies reptiles and amphibians — and a field technician. She is now a certified rattlesnake construction monitor, keeping the snakes alive and the workers safe.

She also specializes in presenting educational programs at area schools and state parks.

Pennsylvania has the last good population of timber rattlesnakes in the northeast United States, Foster says. They are endangered or threatened in surrounding states like New York and New Jersey. People may not know that “timbers” eat small rodents, and as many as 2,500-4,500 ticks a season, keeping the tick population down. There are three venomous snakes in Pennsylvania — the northern copperhead, timber rattlesnake and eastern massasauga.

Harvesting or keeping a rattlesnake requires a venomous rattlesnake permit. Foster herself has seven pet snakes, some of whom she brings to her school and state-park presentations. She also has a cat and a dog, geckos, a turtle, a tarantula, two ducks and five chickens.

Male snakes can travel four to five miles from their den. A lot of snakes die, though, crossing roads or traveling through farms or land. People are also known to harass or kill rattlesnakes, or be bitten trying to move a snake from its route.

“When I take a rattlesnake with me to my talks, the first thing it does is coil or try to get away and hide,” Foster said. “Typically, they just want to be left alone. They rely on their camouflage, and aren’t as dangerous as people think they are.”

Foster is also known for rattlesnake relocation — she receives many calls from home or landowners, asking if she can relocate a rattlesnake, safely, from their property. She is able to move the snake 300 feet from where she finds it, not taking it far from its migratory route.

Another common misconception, Foster says, is that a snake’s rattle indicates aggression, when it’s actually just a “sign” to let someone know it’s there. A snake can still bite if it isn’t rattling. One out of four bites are “dry bites,” she says, that contain little to no venom.

Foster likes to start educating students when they are young, she says.

She also lets the youths know to keep their distance from rattlesnakes and not harass or upset them.

At a presentation at Mahoning Creek Dam in Pittsburgh, Foster recalls a woman who was crying and frightened of a water snake, so she helped her hold one and overcome that fear.

“That was one of my favorite moments,” she said. “I think about her a lot.”

She tries to bring different snakes to each presentation, like copperheads and baby water snakes, to show adults and children the difference, Foster said. She often hears things like “I’m terrified of them, but I think they’re fascinating.”

For more information on snakes and safety, contact Foster at 814-788-0489 or stacylynnie5055@gmail.com. She can be found on Instagram as “stacy_snakelady.”