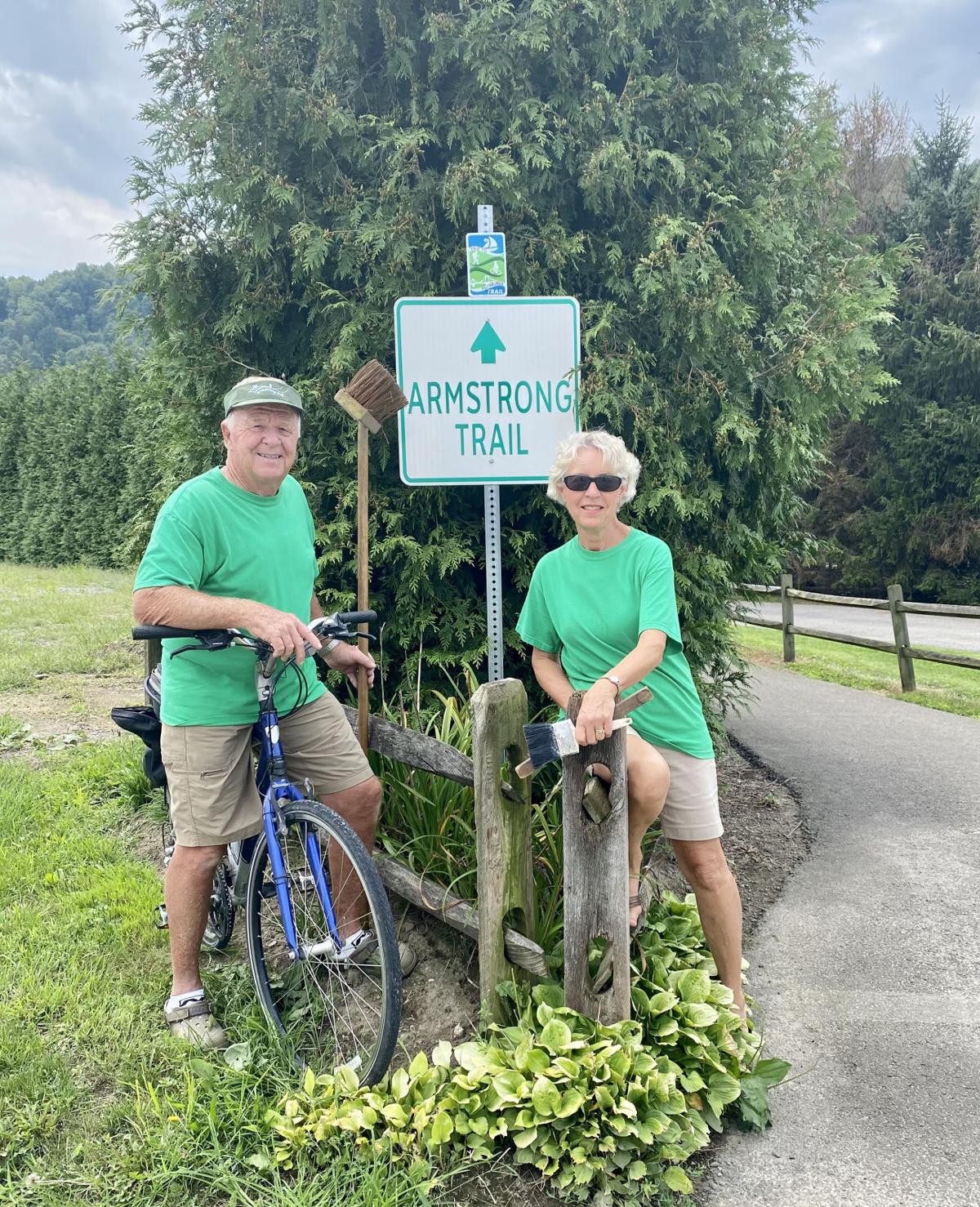 MARTY (LEFT) AND Toni Henry of East Brady were recognized recently by the Council on Greenways and Trails for their work over the years along the Armstrong Trail. 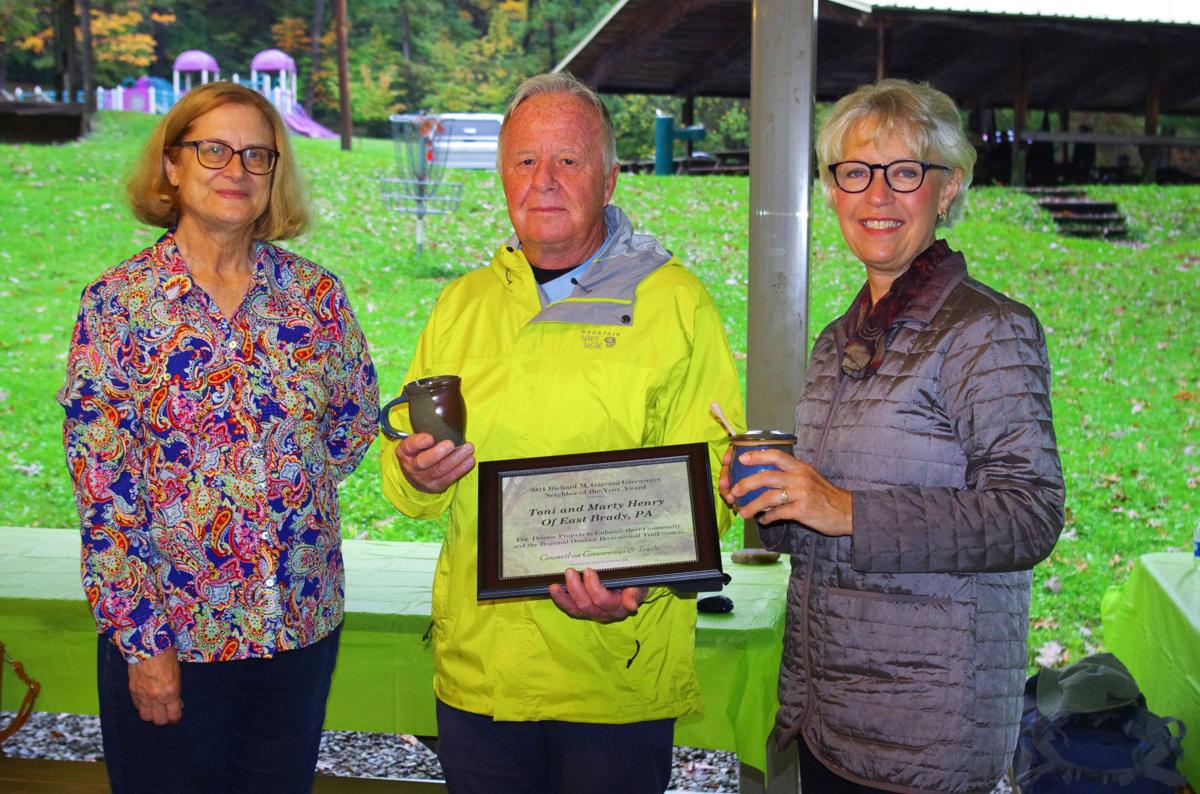 MARILYN BLACK (LEFT) presents Marty and Toni Henry of East Brady with the Richard M. Garrard Greenways Neighbor of the Year award at a program in Oil City on Oct. 9.

MARTY (LEFT) AND Toni Henry of East Brady were recognized recently by the Council on Greenways and Trails for their work over the years along the Armstrong Trail.

MARILYN BLACK (LEFT) presents Marty and Toni Henry of East Brady with the Richard M. Garrard Greenways Neighbor of the Year award at a program in Oil City on Oct. 9.

EAST BRADY – The local trails that so many people have enjoyed over the years, especially during the pandemic, exist in large part because of the volunteers who helped to create them and continue to maintain and improve them.

Two of those dedicated volunteers — Toni and Marty Henry of East Brady — were recognized last week for their many years of work along the Armstrong Trail in Clarion County.

“One of the main reasons we moved here is because we knew we had this trail right outside our door,” Toni Henry said after she and her husband, Marty, were presented with the Richard M. Garrard Greenways Neighbor of the Year award on Oct. 9 in Oil City by the Council on Greenways and Trails (CGT).

That segment of the Armstrong Trail, which connects the main Armstrong Trail into the Allegheny River community of East Brady in southern Clarion County, was in rough shape when the Henrys moved into town in 2007.

The Henrys said they had retired from their careers in the Pittsburgh area, and decided to return to Marty’s hometown of East Brady to open a tea room near the trail head in town.

“They immediately became involved in several organizations focused on revitalizing East Brady and enhancing its outdoor options by linking with like-minded trail advocacy groups at the regional level,” states the program from last week’s award ceremony.

“We’re on it almost every day,” Toni Henry said.

Since they moved to town, the trail has seen a major transformation. She said that back in 2007, the route was a rough path, with several areas where hikers and bikers shared roadways with cars, and then there were issues with property ownership, with some lands having reverted back to the original owners after the railroad lines ceased operation. Today, the popular trail not only has an easy route connecting East Brady with Phillipston, but offers a large trailhead area with parking, benches, signage and more.

Marty Henry said that while he primarily rides the trail for health reasons, his wife rides it for the scenery and the peace and quite the riverside trail provides.

“East Brady offers peace and quiet most of the time,” he said, noting that Toni is the one who does the most work and is most deserving of the trail award.

“We try to keep busy and do what we can,” he said, pointing to projects in the community such as the large East Brady mural and the town’s annual Christmas light-up night festivities.

In fact, the Henrys said that as the trail has been developed over the past dozen years, their attention has turned more toward the town itself.

“We’ve kind of shifted our priority to the trail town,” Toni said, noting the importance of keeping East Brady viable, especially with the impending completion of the nearby Brady Tunnel along the Armstrong Trail. She hopes trail users will not bypass East Brady, but instead come into town for the restaurants, shops and lodging. “We’ve got a great trail head with lots of parking.”

Working with the East Brady Area Development Corporation (EBADC), Toni Henry said the group has undertaken many projects in town, including the art windows in the business district, signage for the trail, the mural, the little library along the trail, and much more.

The Henrys were nominated for the award by Marilyn Black, CGTW treasurer, who wrote in her nomination about the many community projects that the Henrys have been involved with throughout the years.

“Name a project or a fundraising event of EBADC, and the odds are excellent that one or both of the Henrys will be planning, coordinating and participating in it,” she wrote. “The husband-wife team are friendly and willing unpaid workers who link their time outdoors with ways to help their neighbors and other guests enjoy expanded and well-maintained greenways and trails in Clarion County and along the Erie to Pittsburgh Trail.”

The Henrys also recognized the many others who have put in so much time and work to make the trail what it is today.

“There’s a lot of collaboration. You just don’t do it on your own,” Toni Henry said. “Most people don’t appreciate that most of that trail is built by volunteers.”

Marty Henry also pointed to the state’s support of trails and recreation in recent years, saying that the funding that has been awarded for work in communities like East Brady “is well worth it.”