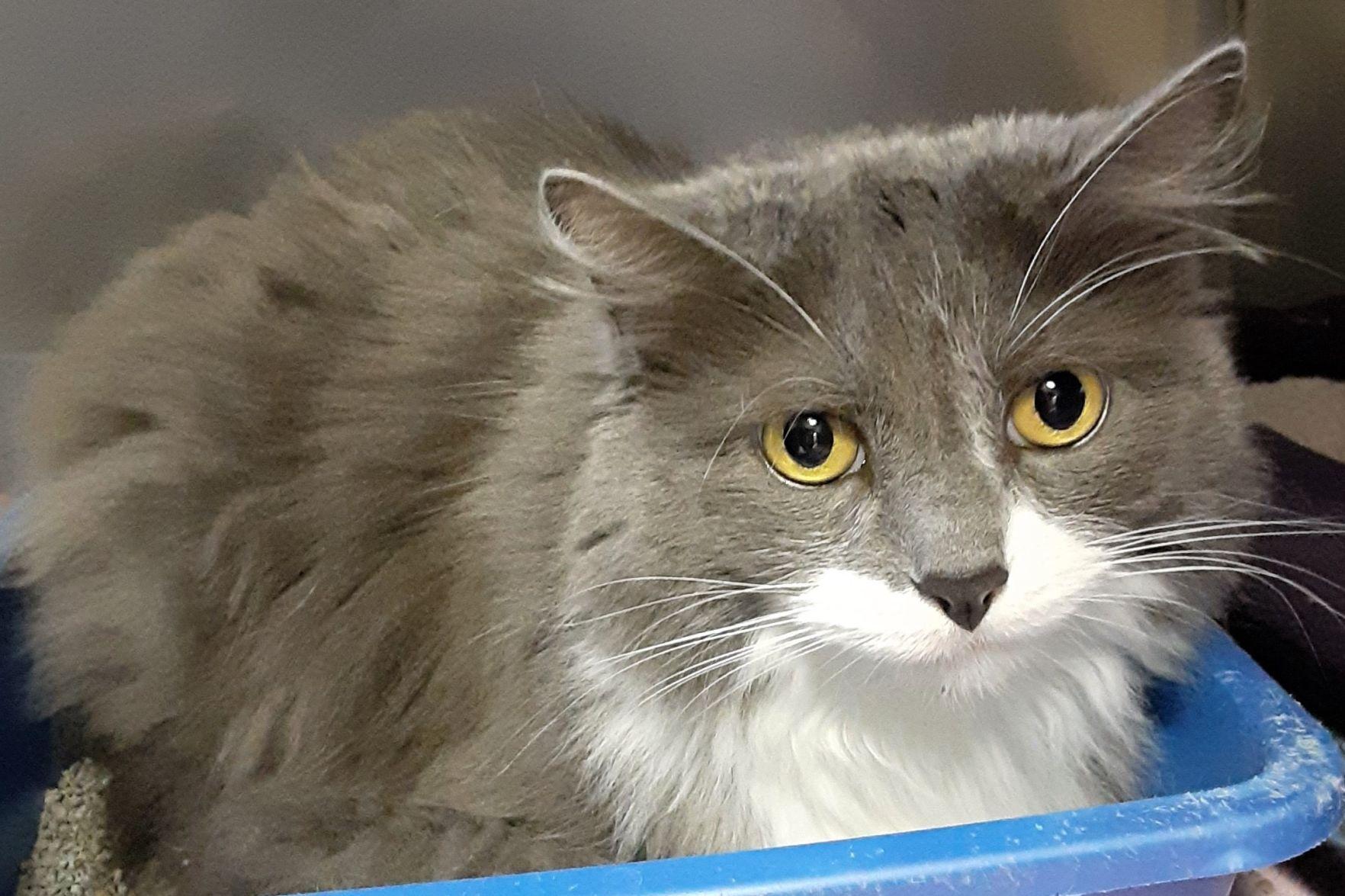 Dom Phillips and IsaBella Ruth stand next to their completed manger scene they painted on the Reynoldsville Food Pantry’s window.

Grace Askey adds the words “Oh Christmas Tree!” to her classmate’s Christmas tree painting on the window of Reynoldsville Hardware.

REYNOLDSVILLE — Jeff Tech Art Club students spent the week in Reynoldsville adding some Christmas spirit to the businesses by painting Christmas scenes on the windows for the holiday season.

Art Club advisor Angela Dragich said it was nice for the students to get back in town for the paintings this year after having to cancel the trip last year. This is the fourth year the club has done the window paintings, and some of the students were repeat participants.

Dragich started the program in 2017, and would have interested students come to town after school to do the paintings. Now, the program has expanded, and the school allows her to bring the students to town during the school day to paint.

“I try to give at least nine different students a choice to go, and then we have students who want to fill in and go more than once obviously,” Dragich said.

Students have to be passing all of their classes, and have a pass signed by their teachers to participate. The other teachers are also supportive of the project, according to Dragich.

She explains the project to the club each year, and students have the opportunity to get a permission slip signed by their teachers, and then she checks who is on the list for each day to participate.

“Then when not enough people volunteer, or if some are out for quarantine, we let some of them double up, and then we have alternates,” Dragich said. “It’s definitely nice to get the kids involved with the community since our school is right here in Reynoldsville.”

She also said it seems that more businesses in town have taken an interest in the program and joined, and there were about 20 businesses this year. The club was in town for three days, Monday through Wednesday, for the paintings.

“It always impresses me how creative they are with the different stores,” Dragich said. “I enjoy doing it, and the kids enjoy it even though they get cold. It’s something they still sign up to do.”

All of the businesses are along Main Street, except for the American Legion which also participates.

Dragich works with the Reynoldsville Community Association, who reaches out to the businesses for a list of those willing to have their windows painted, and it provides the paint as well.

The students also get to interact with the businesses, asking if there’s any specific imagery they would like painted on their window. Jessica Geer Family Salon specifically asked for a Grinch-themed painting on her windows, and the Reynoldsville Food Pantry always asks for a religious theme for their window.

“The businesses are so nice to our students, they were giving them drinks and food over here today,” Dragich said. “Very supportive of it… they just treat our kids really well.”

One returning student, Grace Askey, said this is her third year participating and she keeps coming back because of how nice it feels to spread the Christmas cheer.

“Everyone’s so nice, even just when we’re painting and people walk by and look at it. It’s nice to see that,” Askey said.

Fellow painter and student Steven Pierce said it was nice to give back to the community with the project.

Dragich said the timing is perfect because they come down and paint right before the holiday parade through town. They will leave the paintings through the holiday season, then will come back to town to clean them off in January if a business has not cleaned it yet.

Pictured is the children’s clothing section at Til Vintage in downtown DuBois.

Til Vintage is located at 36 W. Long Ave. in downtown DuBois.

Pictured is part of the clothing section of Til Vintage in downtown DuBois.

DuBOIS — Til Vintage at 36 W. Long Ave. was opened by two local women over the weekend of Nov. 19. Fittingly, “Til” stands for “Things I love.”

Co-Owners Savannah Bogacki, of Falls Creek, and Shelly Benninger, of Brockway, said the first weekend was just a “soft opening,” and they plan to host their grand opening over the upcoming weekend and Small Business Saturday in DuBois Nov. 27.

Bogacki, originally from St. Louis, Missouri, has had a love for vintage items for as long as she can remember, recalling going to yard sales on early mornings with her grandmother growing up. She has a hard time throwing anything away, she says, being that every item was “someone’s favorite thing” at one point or another.

A few months ago, Benninger was selling items at Nomadic Trading Co. in Punxsutawney, and Bogacki, who has been selling vintage clothing online, was looking for a local outlet. From there, the women said they just “clicked,” having similar vibes and interests. So, when the West Long Avenue location came about, the women decided to embark on a new adventure.

Benninger has worked in the decorating business for years, and formerly owned a store called Country Junction in DuBois. Her interest is more in the novelties that regress her back into her childhood, such as “vintage planters” she recalls having when she was little. She also has a special love for the vintage kids’ clothing.

Bogacki added that she has collected items from just about everywhere, including estate sales, the dry cleaners, auctions and even on the side of the road at times. It’s her way of sustainable living and contributing to “going green,” she says, that way, less things are taken to landfills.

Both women said they aim to give back through the new business, contributing to local causes that help children and people in need. Bogacki has a particular interest in giving back to domestic violence and victims of sexual assault, something she hopes to do in the future.

Despite having a store full of items, the venue is extremely organized, which Benninger takes pride in. Bogacki joked that the pair, together, are “organized chaos.”

Vintage clothing is also popular since it’s harder to find, the women noted. The store even carries some vintage plus-size items and men’s clothing, leather jackets and fur items, purses and hats and a lot more. There is also a non-vintage section, and a dresser with drawers full of $1 items.

One of the most enjoyable parts, the women said, is when people come into the store and see a nostalgic item that takes them back in time or brings about a memory. The two enjoy talking to customers, too, and hearing stories and learning about unique items people collect.

The vintage community, mainly popular in cities, is growing locally. Benninger noted that items like vinyl records, which the store has a collection of, are definitely of interest to people. The women have even been hearing of people in other states finding out about the shop, wanting to stop in while they’re home for the holidays.

Benninger and Bogacki said they plan to rearrange and rotate out items in the store regularly, that way there is always something new to look at.

When it comes to vintage, Bogacki “enjoys the hunt,” she said, and likes to price things as she found them. The store prides itself on offering affordable items.

The DuBois community has been very welcoming thus far, and the women are excited to be a part of building “a strong downtown.” They also plan to partner with other local businesses for special events.

Til Vintage will be offering giveaways and other specials over the weekend of Small Business Saturday. Current hours are Thursday and Friday from noon-7 p.m. and Saturday from 10 a.m. to 7 p.m. But, the women said if customers can see them inside the shop working on other days, they are welcome to stop on in.

REYNOLDSVILLE — The Reynoldsville Community Association has planned events for every Saturday leading up to Christmas following the holiday parade this weekend.

After this weekend, the RCA and other Reynoldsville organizations have plans for additional events in December.

DuBOIS – The City of DuBois plans to spend more in 2022 than it did this year but it won’t cost residents anymore in taxes.

The city council passed the first reading of the proposed no-tax-increase budget and supporting tax levies at its regular meeting Monday.

RevenueRevenues are expected to total $20,081,213 next year, including $1.3 million in property taxes and $1.1 million in local income taxes. The major source of revenue comes from combined payments of $9.4 million from the water and sewer funds in the form of lease and management payments. Other major sources of revenue include trash collection for $1.5 million, grants will add another $1 million and transfers from investments are expected to total $3.6 million.

Public works will cost $5.6 million. Highways, streets and roads will account for $970,906. Refuse and recycling will cost $1.3 million. Sanitary sewer and water line maintenance will consume $1.1 million and water and sewage treatment will cost $2 million.

The city will spend $670,000 for culture and recreation, which includes the library, parks and pool administration and maintenance.

The capital projects budget is listed at $5.4 million, with the major item –Maple Avenue sidewalks –penciled in at $3 million.

TaxesThe real estate levy of 23.5 mills –20 for general fund and 3.5 for culture and recreation –means the owner of a property valued at $50,000 will pay about $294 in real estate taxes to the city. Property owners also pay property and other taxes to Clearfield County and the DuBois Area School District.

The budget and tax levy ordinances were passed unanimously.

A public hearing will be held on the spending plan at 6:45 p.m. Monday, Dec. 13. Final adoption is anticipated at the council’s Dec. 27 meeting.