Sue Ray Smolik and her husband, Mike, came back to Brookville from Nebraska for her class (1981) reunion. During the tailgate party before the Homecoming game Friday evening, she spent some time sharing memories with former Brookville principal Fred Park when they met at the alumni tent.

Six-year-old Drew Caylor was ready for the football game after she had her face painted and made her own little megaphone during the tailgate party.

Elliott Park, a 2021 graduate of Brookville Area High School, and his grandfather, Fred Park, a 1961 graduate of BHS, met at the alumni tent during Homecoming festivities Friday night at the high school.

No tailgate party is complete without a tasty hotdog, and brothers Leo and Brock Walter, future members of the Raiders’ football team, enjoyed their snack before the Homecoming game Friday night.

Eighth-grader McKenna Potts chose the popular blue and white Raider dots when she had her face painted by Ashley Snyder at the face-painting station during Friday night’s tailgate party at the high school.

Lots of students lined up at the dunking booth for a chance to soak their favorite teachers during the Homecoming tailgate party Friday evening. Pictured in the dunking booth is high school technology teacher Jake Lewis.

“It was wonderful to be able to have students, families, and the community come together to celebrate our Homecoming. We had a great turn out and the weather was perfect,” high school principal Ruthanne Barbazzeni said.

A highlight of the party was an alumni tent, sponsored this year by the Class of 2020 as a gift to the community. Alumni received t-shirts and enjoyed light refreshments while renewing acquaintances and sharing memories.

Sue Ray Smolik, a member of the BAHS Class of 1981, and her husband, Mike, were in Brookville for her class reunion, held over the weekend. Smolik is now a fifth-grade teacher in Nebraska and recalled some of her experiences while a student in the Brookville schools.

A variety of games, face painting, live music and other activities for all age groups kept several hundred visitors to the tailgate party busy. Snacks were also served.

“This is what BAHS is all about, making a home for our community to celebrate learning and socialization,” Barbazzeni said. “Covid has challenged education from many different perspectives, but activities such as this demonstrates what a strong team of educators we have at BASD and how we pull together to provide all that we can to support our students and community.” 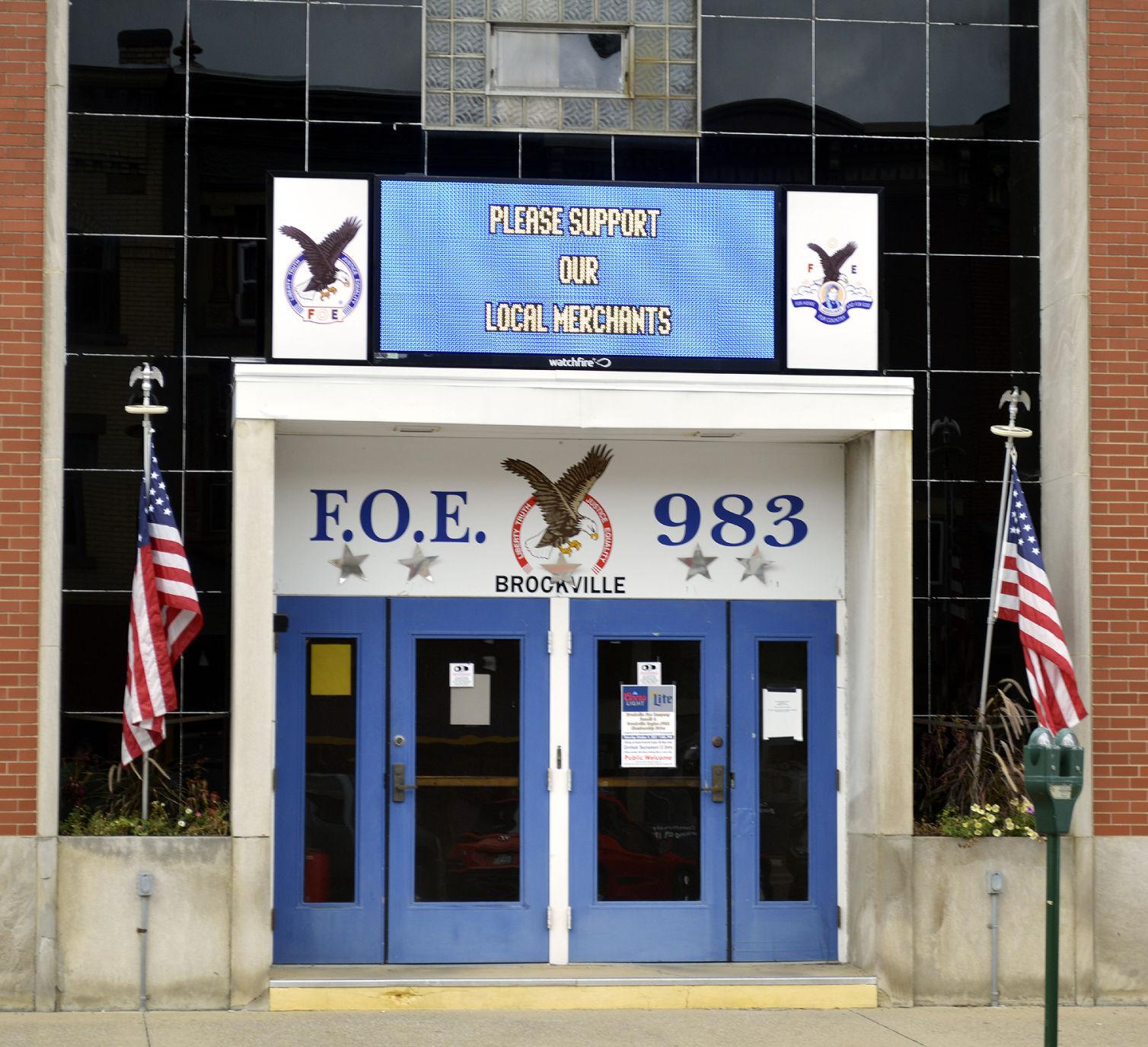 The dining room at the F.O.E. 98 building is no longer open to the public. The F.O.E. voted recently to open the dining room only to members and guests.

The airport’s total other actual income, which would include the CARES Act reimbursement, the Passenger Facility Charge (PFC) revenues and county allocations, was $37,587.35.

The airport’s net income without the CARES Act and PFC would have been –$20,212.57, said Rodgers.

Authority member Jason Ramsay, referring to the fact that the airport’s net income would have been -$20,000 in August without the CARES Act money, asked if there is a plan moving forward to stay in the black rather than so deep in the red when the CARES Act money runs out in about 1 1/2 years.

“That’s a huge deficit. And I know we’ve just increased salaries and such, but you know, I’m just wondering ... do we have a plan?” said Ramsay.

Rodgers acknowledged that was a good question.

“We’re working on the budget for next year,” said Rodgers, noting that the finance committee was scheduled to meet this week.

“We did have some hits this year on the fueling maintenance,” said Rodgers. “We had a couple of big hits at the beginning of the year. So that’s part of what we’ve had had to carry. That number will be with us throughout the year.”

“I love the fact of the CARES money, but I’m just looking at these deficits month-to-month,” said Ramsay. “And I’m just wondering ... what is our business plan? Where are we getting this extra revenue from as we move forward? And I have seen that our numbers are climbing ... almost matching 2019 ... but where are we going to look for this extra revenue? Do we have any thoughts on how to drive more revenue?”

“I think one of the big things we have got to do is help control expenses the best we can,” said authority Chairman Jay Chamberlin. “As Alvin mentioned, some unexpected things happened this year ... a lot of expenses in the fuel trucks, Jason, that we hopefully will have new fuel trucks here soon. Well soon could be several months yet, but help eliminate those expenses that we didn’t, that we hopefully won’t have in the future. But as far as income standpoint, we’ve tried to maximize our revenues the best we can as contracts come up from the rentals ... we have increased those.

“We are looking at that,” said Chamberlin. “We need to try to control our expenses and Bob (Shaffer) and Bonnie (Sylvester) do a good job of doing that. As Alvin said that at this point, the finance committee is looking at a budget for next year that will help address these concerns. And you’re right, it is a concern. We can’t continue to run into negative, or we can’t be around very long.”

“That’s what I’m trying to drill in,” said Ramsay. “I’d like to challenge everybody maybe to come up with some ideas for extra revenue streams, because I see our numbers not meeting the EAS (Essential Air Service) standards that we want. And even though we’re climbing, we’re still not there. And I don’t know how long we’re going to keep on getting grandfathered in for the forgiveness.”

Ramsay said he believes without some extra revenue streams or an idea on how to make more revenue, “we’re not going to ... after this CARES’ money is gone, we’re going to be struggling. And I’d hate to see that.”

Part of the issue, said Rodgers, is that the airport is not operationally up to the levels that it was in 2019.

“Without that we don’t get the additional fueling income, which we know is very important to us,” said Rodgers. “And that, we have no control over. We had the additional employment costs. We had to fix that situation. We’re in the same position that most people are in. So we did what we had to do there.”

“But, if you look at our fueling costs, I beg to differ on that because if you look at our fueling revenue that we’re seeing right now, it is climbing to the 2019 levels,” said Ramsay. “I know our passengers, when I look at the charts that were just presented in today’s portfolio, I’m just like, okay, it looks like we’re getting back to semi-normal, we’re not too far off. Actually, to be honest, the fueling looks like we might even achieve a higher fuel level if we keep on the trend than we did in 2019. So fuel is one thing for revenue.”

“We were definitely concerned about that situation,” said Chamberlin. “We got inside to balance the budget and we are dependent upon the county’s allocations and Sandy Township and the City of DuBois ... as I think basically all airports rely upon those assistances. We definitely have to control our expenses, and as you said, look for ways to generate additional revenues to try to balance our budget.”

Chamberlin explained that the CARES Act money is needed for projects, not to fund the airport.

“We’ve got to keep the operational side as balanced as we can. Otherwise, we can’t do the projects that we need to keep the airport operational, too,” said Chamberlin. “It’s a struggle. It’s always been a struggle. There are certain things other, non-commercial airports are doing that we can’t do as a commercial airport. But definitely the finance committee is looking at that, Jason, and we’ll see what they come up with.”