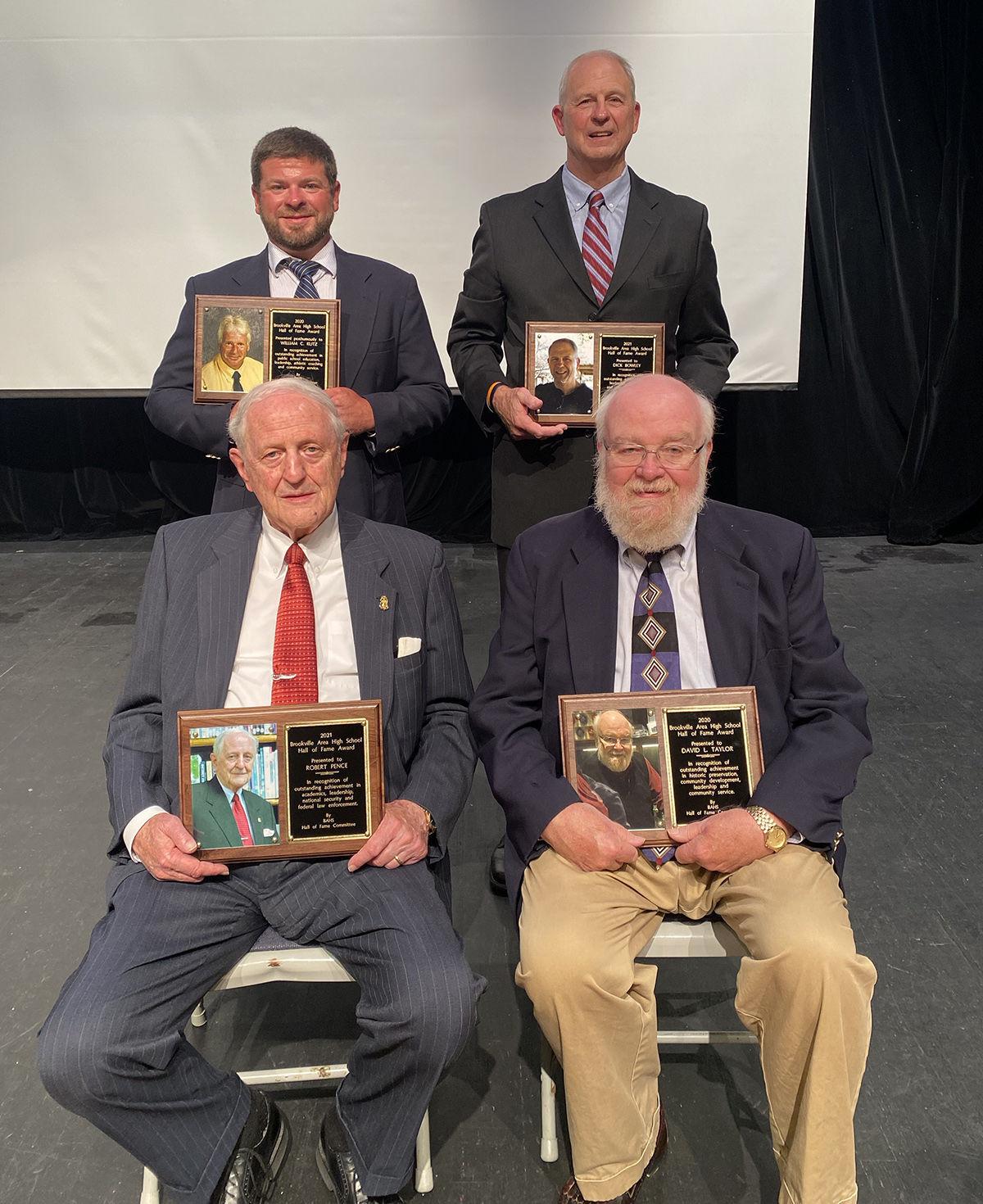 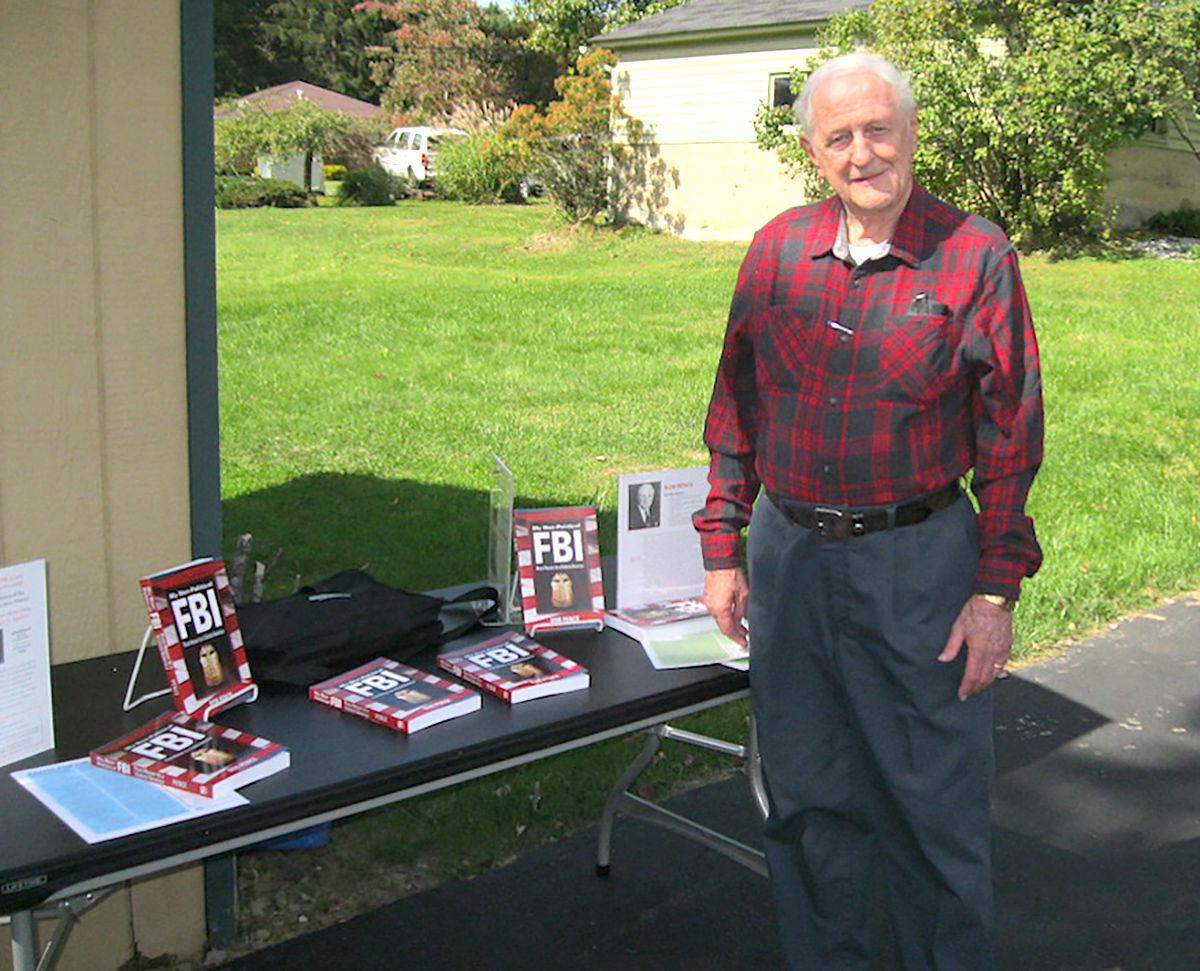 After being inducted into the Brookville Area High School Hall of Fame last Thursday, 1956 graduate Bob Pence held a book signing event Saturday afternoon at Rebecca M. Arthurs Library in Brookville. Pence retired in 1992 following a 30-year career in the FBI. His book tells his story with the bureau and “is an informative and loving look at the bureau and the special agents who serve there.”

After being inducted into the Brookville Area High School Hall of Fame last Thursday, 1956 graduate Bob Pence held a book signing event Saturday afternoon at Rebecca M. Arthurs Library in Brookville. Pence retired in 1992 following a 30-year career in the FBI. His book tells his story with the bureau and “is an informative and loving look at the bureau and the special agents who serve there.”

The accomplishments of the seven were impressive.

Four inductees were present for the ceremony as Bowley, Pence and Taylor were on hand to accept their honors. Harding was able to remotely accept his award along with Dr. Erika Nolph-Ringdahl, who was present and accepted the award for her father who was honored posthumously.

Chapa-Perni was unable to attend while the late Kutz was honored posthumously with his son Max accepting his award.

Three honorees were 1950s graduates and Nolph and Pence actually grew up as childhood friends, graduating one year apart. In fact, Nolph was the valedictorian in 1955 and Pence a year later in 1956.

Nolph was a longtime physician and highly respected medical researcher at the University of Missouri Medical School. The director of Nephrology at Missouri, he helped revolutionize the worldwide approach to treating patients with end stage renal (kidney) disease and his impact was enough that the school endowed its Nephrology Department in his name in 2007.

In the world of kidney failure treatments, Nolph is synonymous with Peritoneal Dialysis and his work pioneered the study of this therapy and has impacted this area internationally. He was a founding member and president of the International Society of Peritoneal Dialysis and served as the president of the American Society for Artificial Internal Organs.

After Nolph retired in 1999, he continued to work as the chair of the annual International Dialysis Conference and taught residents, fellows and colleagues on a regular basis. He was also an accomplished musician, playing in multiple bands in Missouri — marching, concert and swing.

Nolph’s friend Pence, who resides in Littleton, Colo., retired in 1992 after a 30-year career with the Federal Bureau of Investigation (FBI). He’s recently authored a book titled “My Non-Political FBI, from Hoover to a Violent America” and did a book signing on Sunday afternoon at the Rebecca M. Arthurs Library.

In the book, he details the acceptance and growth of female special agents working in the FBI, what is required to become a special agent and comments on the troubling trend he sees of the growing violence in America. He represents Colorado on the Federal Advisory Committee for Juvenile Justice and is the committee’s past national chairperson.

Pence was first assigned by the FBI to New Orleans where he investigated the Ku Klux Klan and civil rights unrest in the 1960s. He was eventually assigned to the FBI’s New York field office to investigate suspected espionage activities by the People’s Republic China. He later was promoted and became a special agent with the FBI in charge of the Charlotte, N.C., office and eventually of the Denver, Colo., office before retiring.

Harding graduated with the Class of 1952 before heading to Penn State University where he graduated with a degree in Animal Husbandry while playing football with the Nittany Lions. However, his involvement in the Air Force Reserve Officers Training Corps (ROTC) program at Penn State led him to choose a career in the military.

Harding embarked on a remarkable career that saw him fly 596 combat missions starting with the Cuban Missile Crisis and then the Vietnam War over two tours. He saved 25 downed airmen, getting shot down twice and his military awards include three Air Force Silver Stars, two Legion of Merits, 9 Distinguished Flying Cross, two Bronze Stars, four Purple Hearts and 40 Meritorious Service Air Medals. According to a military website (veterantributes.org), Harding is the 25th most decorated soldier in United States military history.

Following his combat tours, Harting taught in the Air Force’s Junior ROTC detachments in Florida, Hawaii, Germany, Texas and Italy. He and his wife Barbara reside in Huntingdon, Tenn.

A 2020 Hall of Fame member, Harding was honored in a special ceremony last fall after visiting Brookville and spending time in the high school addressing the student body and football team.

After being presented, Harding accepted his award via video conference.

Taylor graduated in 1966, eventually returning to his hometown in 1983 to oversee Brookville’s Main Street Project under the umbrella of Historic Brookville Inc. With his leadership and support from property owners and local and state government, the revitalization program got attention at the state and national level.

Taylor wrote the nomination of the Historic District’s 1984 listing in the National Register of Historic Places and also prepared the documentation that led to Brookville being named the Outstanding Community of the Year by the state’s Chamber of Business and Industry in 1986.

A past recipient of Brookville’s Dr. Walter Dick Award for community service, he’s the author of a book titled “The way we were: Brookville PA through the Camera’s Lens,” a 300-page book of historic photos and accompanying text focused solely on Brookville and its history.

Taylor was introduced by Diana Farley before accepting his award.

Bowley graduated from Brookville in 1969 after a standout career in football, playing under the late longtime head coach and 2018 Hall of Famer the late Al Lefevre, and basketball. His football talents led to a scholarship at Georgia Tech where he played for the Yellowjackets as the team’s punter from 1971 to 1973, appearing in both the 1971 Liberty Bowl and 1973 Peach Bowl before graduating with a degree in behavioral management.

Bowley spent many years as an executive with Thomas West Book Publishing, a Thomson Reuters Company. He authored a book, “The Power of Prayer,” telling the story of his own year-long, life-threatening ordeal with leukemia in 2008.

Residing in Peachtree City, Ga., near Atlanta, Bowling has been with Fanning Flames since 2012 where he’s involved with sales and leadership as a life coach. He’s also served as the director of senior adults and pastoral care at the First Baptist Church in Peachtree City.

Bowley volunteers in numerous capacities and for many years he was on the board of the Fellowship of Christian Athletes at his college alma mater in Atlanta.

Dan Bowley, his younger brother and also a former Raider, introduced Bowley who was also on hand to accept his honor.

Kutz recently passed away in March of 2020. He was a 1972 BAHS graduate who was an outstanding athlete and football player, earning all-conference honors as a fullback on some of the school’s best-ever teams and also playing under Lefevre.

Kutz taught history, economics, psychology and origins of life at his alma mater for 28 years, retiring after the 2013 school year. He received a Pennsylvania State Teach Award for the Wheeler and Dealer program he created and developed for his economics classes.

During his years at the school, he also served coaching stints in football, basketball and track and field.

Chapa-Perni is a 1990 graduate, who was presented by Hall of Fame Chairman John Pozza. She is currently a maternal-fetal medicine specialist in Cleveland. She has more than 24 years of experience in the medical field and is a member of the surgical team at the Cleveland Clinic where she’s helped perform the first two successful trials involving uterus transplants in the United States. The surgeries transplanted the uterus from deceased donors that resulted in successful births of two healthy babies.

Perni-Chapa has dedicated her life to women and families to help mothers deliver healthy babies and through her research and expertise.

After graduating from BAHS in 1990, she attended from Penn State University, needing just two years to graduate with her bachelor’s degree since she started taking college credits while in high school. From there, she went to medical school and earned her degree in 1996 from Sidney Kimmel Medical College at Thomas Jefferson University in Philadelphia. She earned a master’s degree in public health from the University of Michigan School of Public Health in 2011.

NOTICE Reynoldsville Borough Council will hold their work sessions the