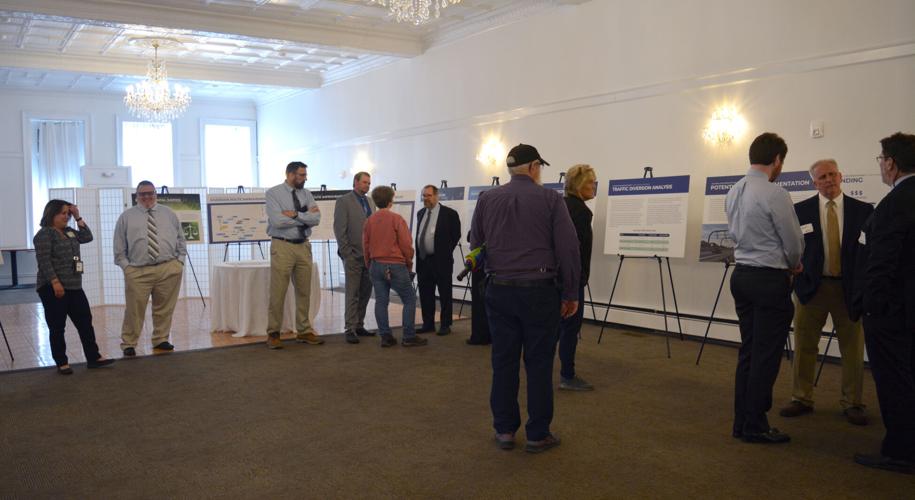 Pennsylvania Department of Transportation (PennDOT) and Federal Highway Administration (FHWA) officials answer questions from the public during the public hearing at Chateau d’Argy on Tuesday. 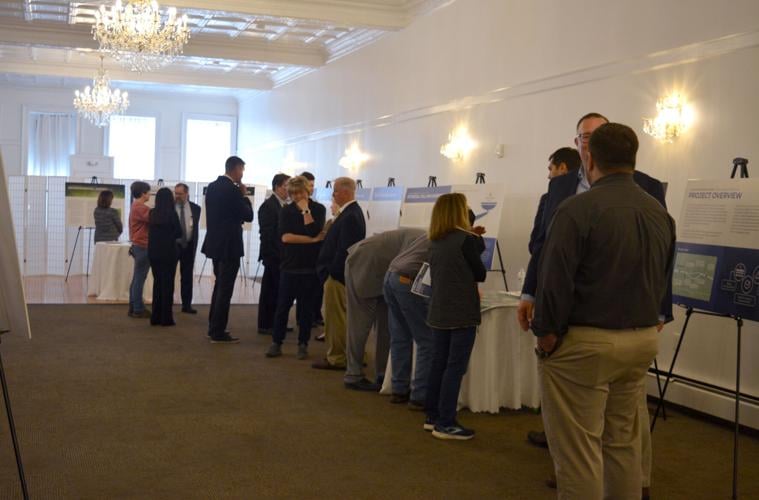 Members of the public continue in and out of the Pennsylvania Department of Transportation (PennDOT) and Federal Highway Administration (FHWA) public hearing to view the Environmental Assessment findings.

Pennsylvania Department of Transportation (PennDOT) and Federal Highway Administration (FHWA) officials answer questions from the public during the public hearing at Chateau d’Argy on Tuesday.

Members of the public continue in and out of the Pennsylvania Department of Transportation (PennDOT) and Federal Highway Administration (FHWA) public hearing to view the Environmental Assessment findings.

The I-80 North Fork project is a candidate for bridge tolling through the Major Bridge Public-Private Partnership (MBP3) Initiative, as part of the PennDOT Pathways program. The Pathways program seeks to identify potential alternative funding solutions for transportation in the state. Under the initiative, tolls collected would be used for the replacement bridges’ construction, maintenance and operation.

Under the EA study, the primary diversion route for the I-80 Bridges is directly down Brookville’s Main Street (state Route 322) to Allegheny Boulevard (state Route 36) – from the Hazen I-80 Exit to the Historic Brookville I-80 exit.

An open house display on the project began at 3:30 p.m. with public testimony starting at 4:30 p.m. All materials that were presented during the open house, including a project overview, maps, low-income tolling details, diversion route improvements and EA documents, are available online and accessible on-demand at www.penndot.pa.gov/i80NorthFork now until May 18.

Speakers of note were Jefferson Co. Commissioner Scott North and Brookville Borough officials David Taylor and Karen Allgeier, and Jared Heuer with the Clarion Co. Economic Development Corp. along with other community members from Brookville and surrounding areas. One man also came from DuBois to voice his opinion on the EA and bridge project.

Brookville Borough Council Vice President Karen Allgeier spoke against the tolling and bridge project. She talked about the amount of truck traffic that already diverts through Brookville when there’s an incident on I-80, and how this will only increase with the project.

“...When they closed two lanes the other night, we were at our theater (Columbia Theater) and we were cleaning up and doing some remodeling etc. and I counted no less than 50 trucks between 7:30 p.m. and 9 p.m. that day when we left the building. The project hasn’t even started, and already we have trucks diverting through Brookville because they may have to wait 10 minutes to get through. I can’t even imagine what downtown is going to be like and the effect it’s going to have on downtown businesses when these trucks are funneling their way through here because they don’t want to wait in line,” Allgeier said.

She also focused on the tax base of the borough, saying it doesn’t have the money to fix everything so many trucks would “mess up.” She questioned what guarantees the town had that PennDOT would be fixing SR 322, saying “we don’t have the people or the money to fill off of these potholes in the wintertime.”

Allgeier also asked what the noise study will find, because the borough was not allowed to put “no brake retarders” signs up, and that she believes there is still more research and work to do.

Brookville Borough Council member and Jefferson Co. History Center board member David Taylor spoke to the officials, expressing concerns about Brookville’s Historic District being left off the map of Area of Potential Effect.

Taylor said he is a past chairman of the Pennsylvania State Historic Preservation Board, and that borough council is on record as opposing the tolling of the I-80 bridges.

He said that to those who live here, it seems like this area was picked for tolling because it is rural, low on population, and low on political influence.

He said he looked at the maps, and on the Area of Potential Effect (APE), the only landmark noted on the map is the Jefferson Co. History Center. Brookville has a 100 acre National Registered Historic District that has been on the register since 1984, according to Taylor.

“I would suggest that if this map fails to show that as a historic site, what else we might ask, is not shown as well. We have a 19th century Main Street. I would like to suggest to you that the amount of traffic not only during construction, which would be horrific, but during the long-term life of the toll system here will have an adverse impact on the Brookville Historic District,” Taylor said.

He suggested looking at other geographical areas to toll, and that under Section 106 of the National Historic Preservation Act, that an adverse impact should be made for the project.

Brookville local and board member of Jefferson Co. Historical Society and Brookville Chamber of Commerce Arthur McKinley also signed up to speak. He said he and many others are in favor of the bridge reconstruction project, but that the construction be done to allow I-80 traffic to continue without detours through Brookville.

He requested all traces of the old eastbound bridge structure be removed, and all of the approach lane land be returned to the community. He also requested plans to mitigate the impact to the Walter Dick Memorial Park.

McKinley also spoke out “adamantly” against the tolls, which he said will funnel unwanted traffic through the historic downtown.

He also mentioned possible illegal levels of noise, saying that because the steep hills into and out of downtown have “ear splitting, machine gun style jake compression brake sounds.”

“…You can see the damage done to most of the homes on East Main Street and West Main Street. They’re all rental properties that are in disrepair because of just this environment where trucks are constantly passing by. It’s become intolerable,” McKinley said.

He requested PennDOT conduct a formal study of the actual traffic volume and noise levels being generated on SR 322 east and west of Brookville, and provide solutions to these problems.